A passionate fly fisherman builds his bucket-list second home on the banks of the Au Sable River.

This home is featured in the December 2017 issue of Northern Home & Cottage, a bi-monthly home publication included in all subscriptions to Traverse, Northern Michigan’s Magazine. Subscribe. 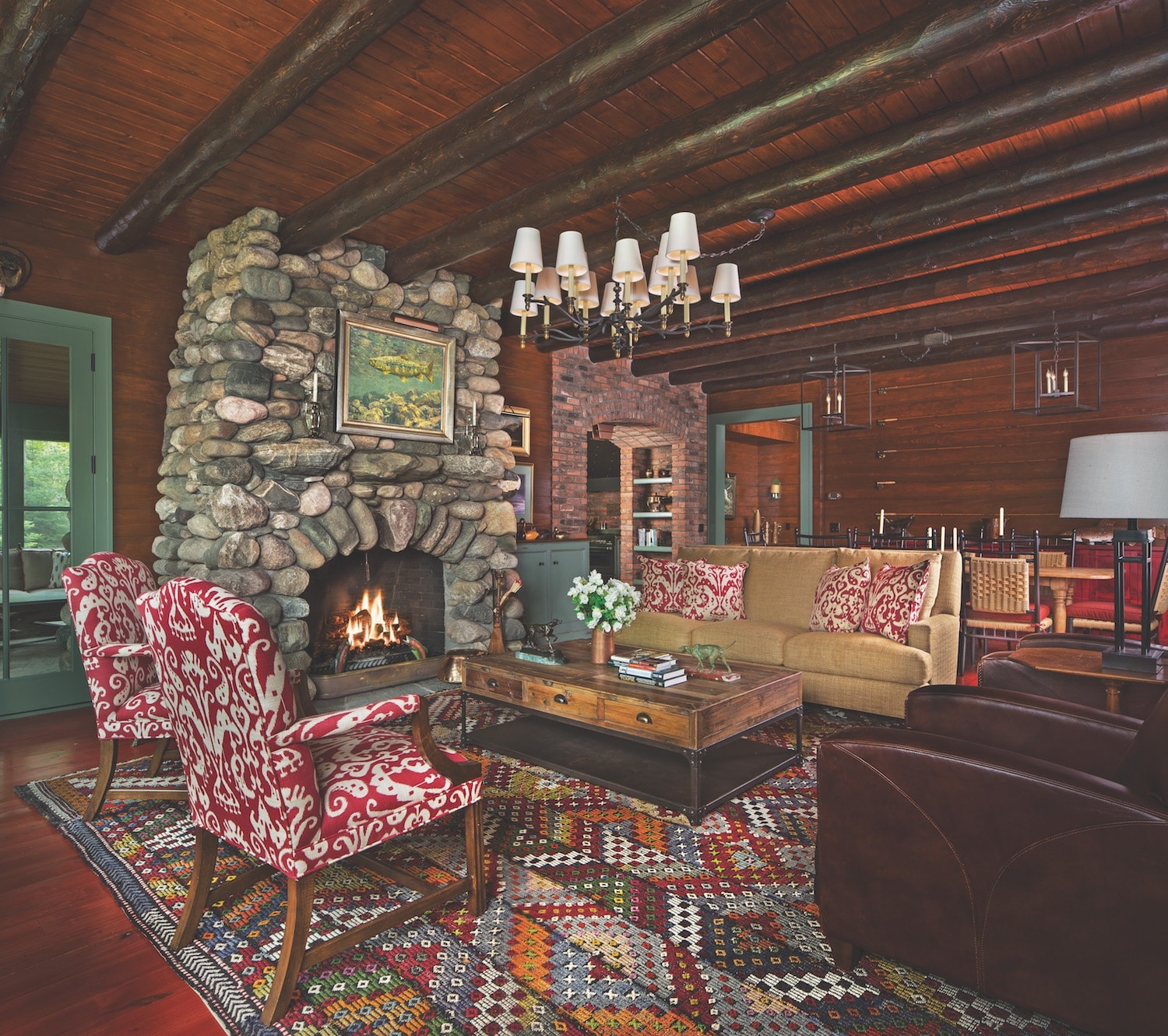 The Au Sable is no ordinary river. Among fishermen, the 138-mile blue ribbon trout stream is referred to in sacred prose, such as: “If God were to make a perfect trout stream it would be like this …” Legends of industry including Henry Ford, Thomas Edison, the Dodges and the Firestones all fished the Au Sable. The international organization Trout Unlimited was founded on this river.

Change happens slowly on the Au Sable—who would want to alter perfection? Family cabins that began with a small one-room “fishing camp” serviced by a makeshift outdoor kitchen might add on slowly over the generations. One summer someone decided to enclose the front porch to make more room for fishing creels and … a few grandchildren later it was time for a real kitchen. 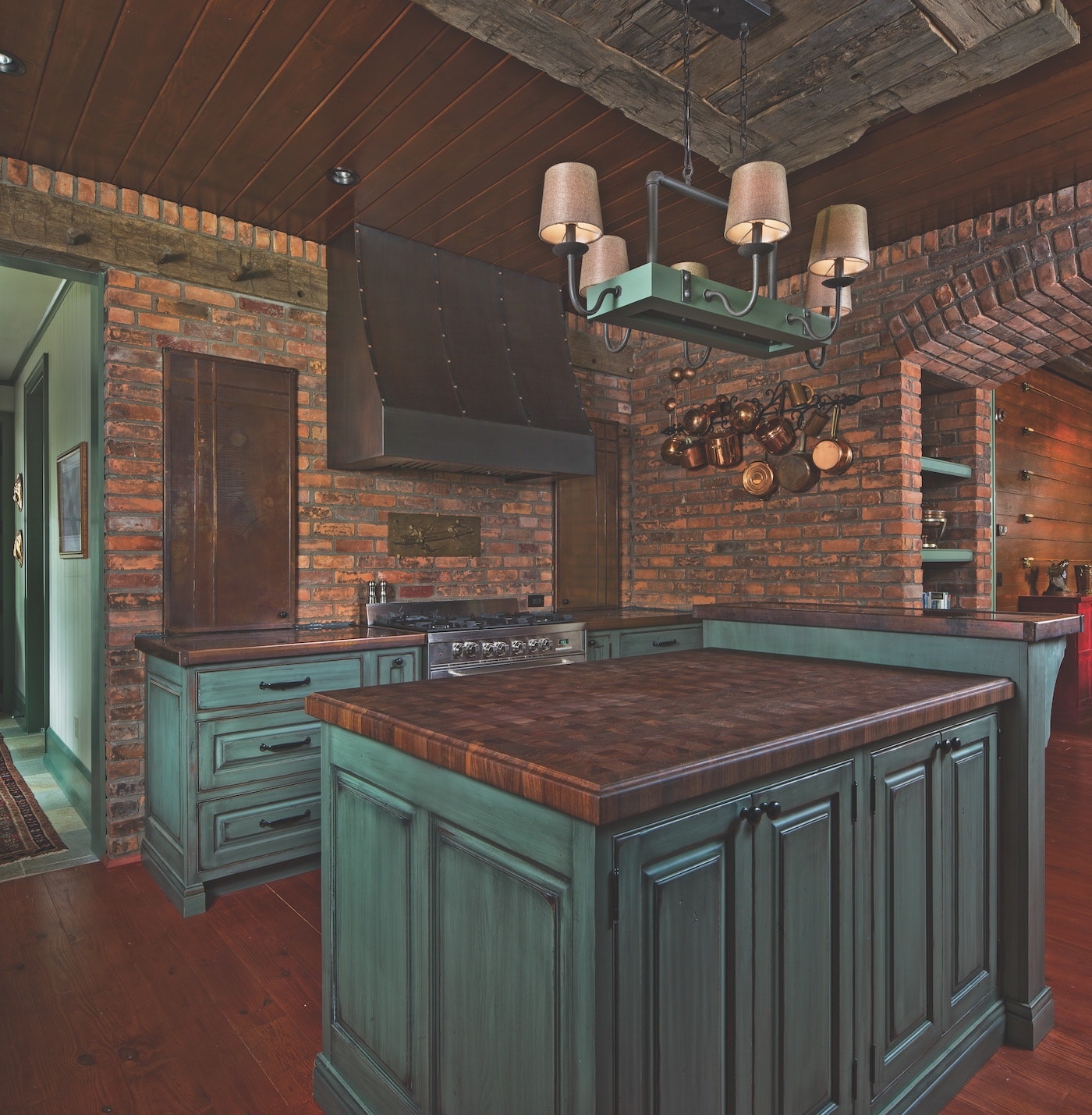 If you love this river, you simply wouldn’t want to build something that didn’t fit in. Such was the case with the homeowners of this new cabin. “I’ve been coming up here to fish since I was 11—My grandfather taught me to fly fish,” the homeowner says. “It’s always been on my bucket list to have a place here.” After finding their dream parcel on the banks of the Au Sable, the couple took their ideas for a design that spoke a fishing-camp vernacular to Northville/Elk Rapids–based architect Joseph Mosey and contractor Eric Render of Render Construction. “From the beginning the message was clear for Joe and me,” Eric says. “The homeowners wanted a brand new house that looks like it has been here a 100 years or more. We really valued that challenge.”

Looking to Adirondack-style fishing camps for added inspiration, Joseph’s design features several different types of exterior materials so that the home appears as though it was added on to over the course of generations. The core is 19th-century-style chinked timbers, while the rest is a mix of live-edge siding (à la 1930s) and board and batten for a more contemporary look. Authentic river-rock skirting, both on the home’s foundation and on the base of timber pillars, roots this home firmly in rough-hewn Northwoods style. 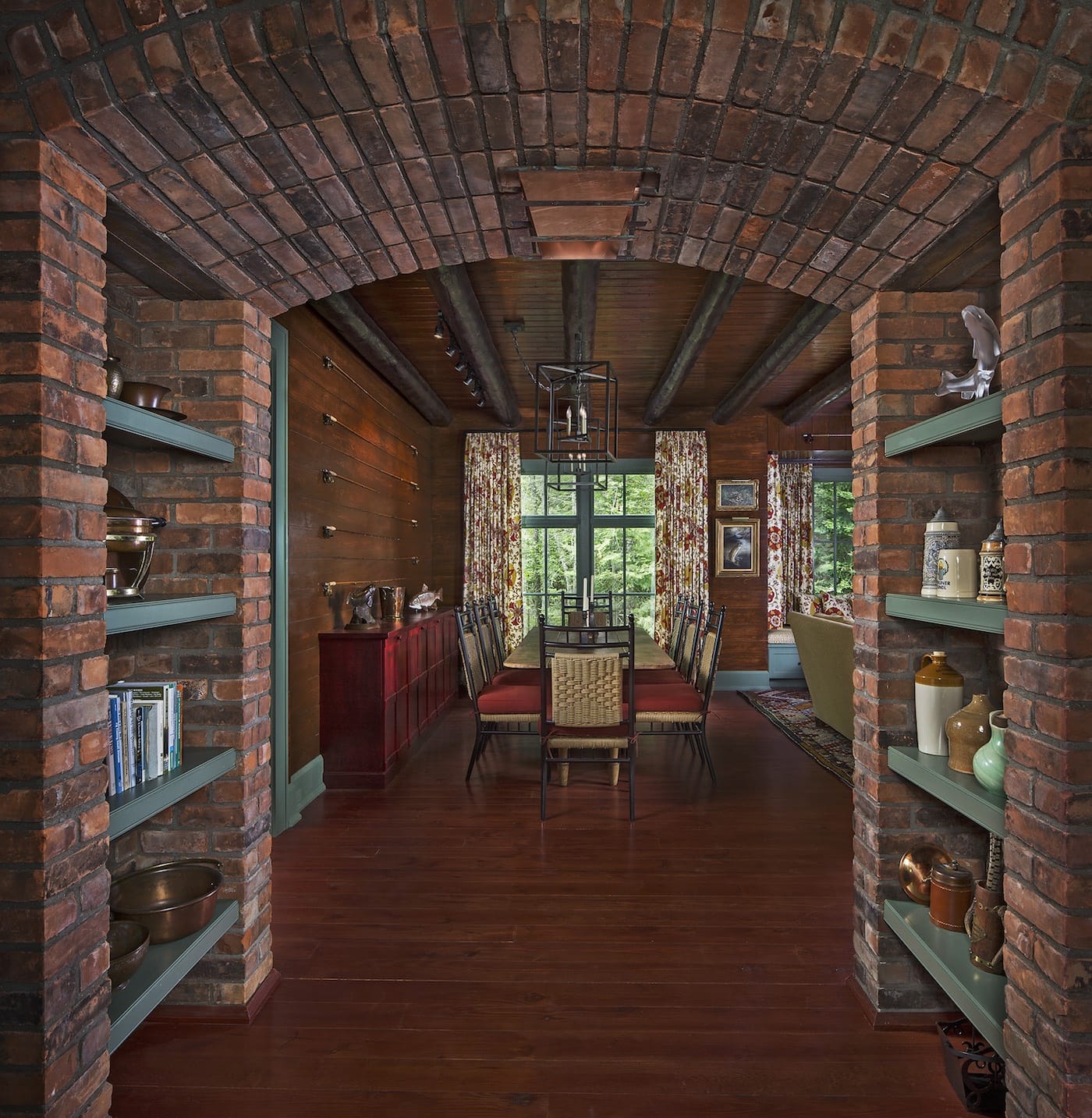 The interior is enchanting in its blend of rustic outdoorsman-style accented with sophisticated furnishings. The home moves from the log-and-chink foyer—with its wall display of antique trout creels, to a great room that revolves around a massive river-rock fireplace that the homeowner points out was purposely built with as little mortar as possible. “In the old days mortar was the expensive part and the stone was cheap,” he explains.

The walls and ceiling in the room are clad in dark-stained pine nickel-board. And that ceiling—supported by stained pined timbers is a conversation piece. Unlike modern construction, in which the floor between stories has a cavity for running mechanicals, the Au Sable house’s first-story ceiling doubles as the second-story floor. “It’s my favorite part—an absolutely authentic cabin ceiling. The timber beams in the great room ceiling actually hold up the floor above,” Joseph explains.

So how about those mechanicals? Installing them, Joseph says, took a bit of magic on the part of both architect and contractor. Indeed, magic is how this entire home feels. Especially when a big old, wild Au Sable River trout decides to settle under the riverbanks—hidden from everything in the world except from this home’s generous windows. 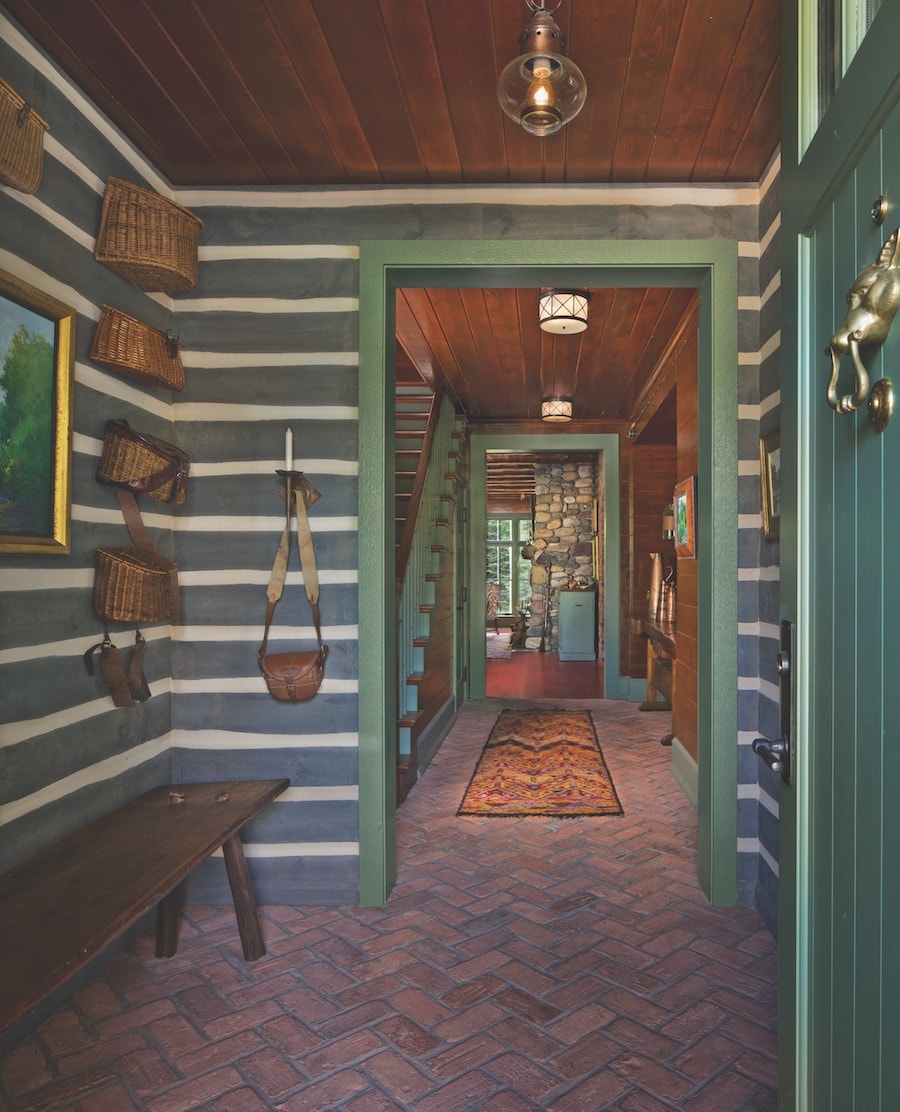 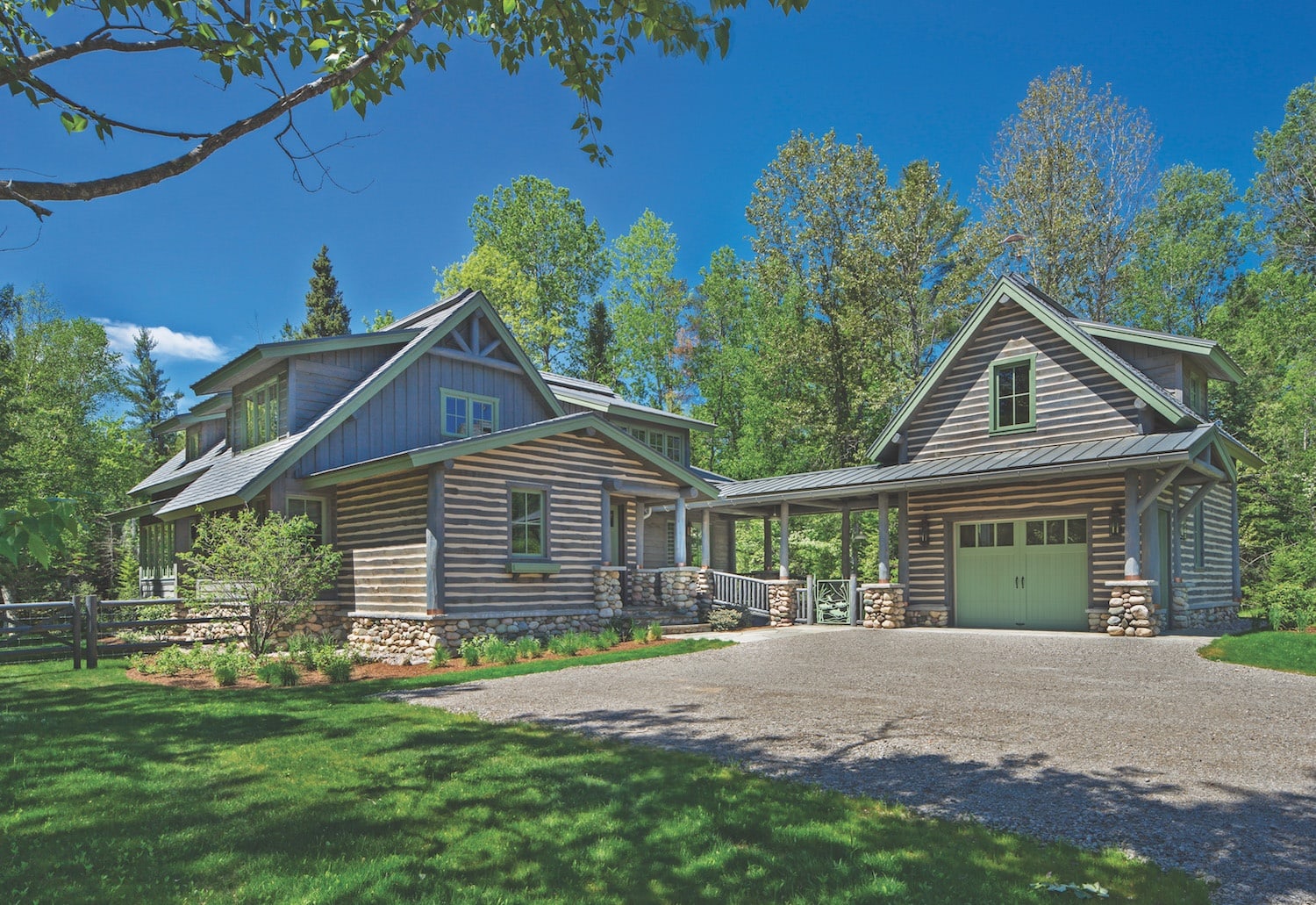 Click the cover to read the latest issue of Northern Home & Cottage online!