Inside a Coastal-Living Traverse City Home 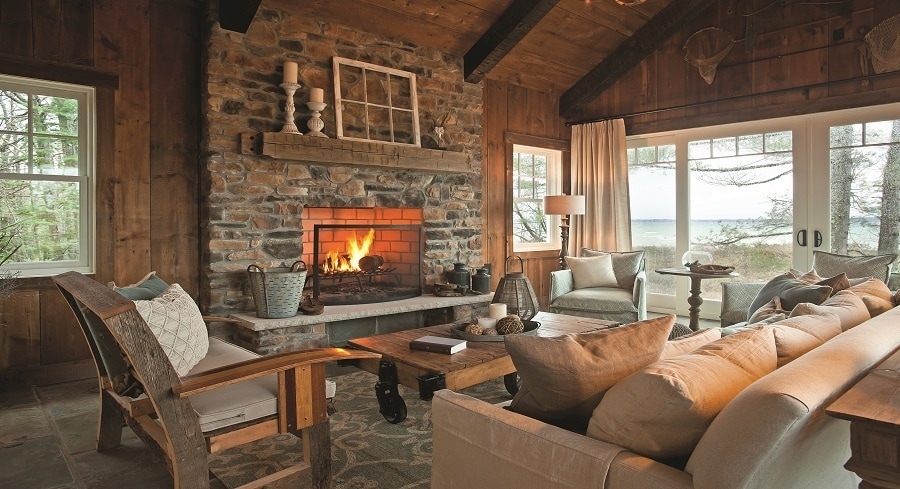 An Ohio-based family reaffirms their love for Northern Michigan by building a coastal-style home on the Lake Michigan Shore. Here’s the design behind the Traverse City home. 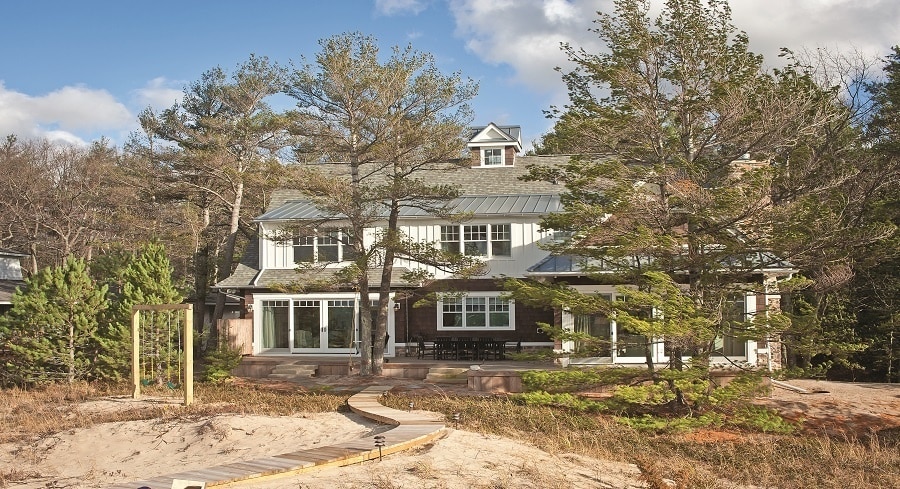 The exterior was designed to take full advantage of the lot.

Distance may make the heart grow fonder, but it can also complicate the building process, says a Columbus, Ohio–based team that recently completed a 3,850-square-foot, five-bedroom retreat just north of Traverse City, for an Ohio-based family.

During the year that it took to complete the house, builder Jim Phieffer, of Trinity Home Builders LLC, made the trip north three out of four weekends each month. It took six hours and 15 minutes door to door, time he used, he says, “to think and plan.” He worked closely with the Ohio-based architect Tim Carr and interior designer Kim Pheiffer, as well as with the homeowners, who live in Ohio but spend as much time in Northern Michigan as possible. 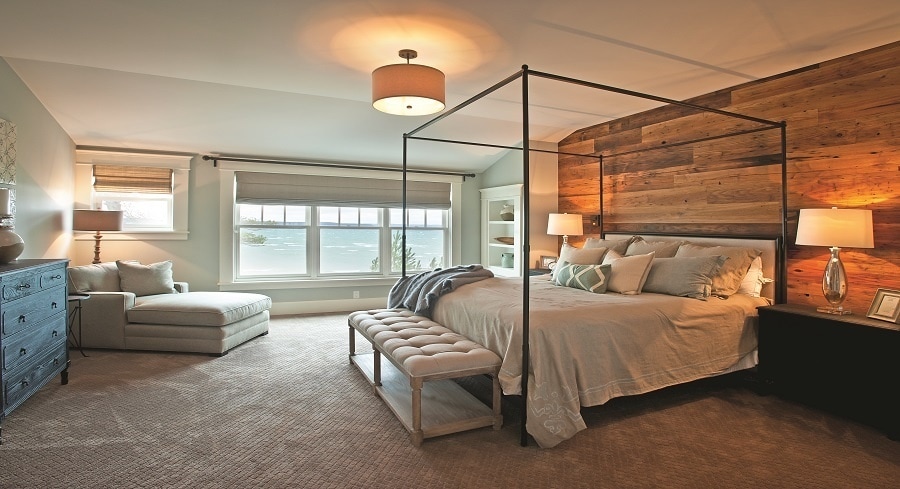 Reclaimed barn wood adds contrast and texture in the master bedroom, which also includes an almost full wall of windows that look out over the lake.

Though based in the Buckeye state, the homeowners have longtime ties to the Great Lakes state. He’s from the East Coast, but moved to Ann Arbor to attend engineering school at the University of Michigan and met his wife, a Michigan native, there. Her family built a cottage north of Elk Rapids in 1978, and she has spent summers in the area since, waterskiing, working in area cherry orchards and all of the other nature-based activities that come with summering in Northern Michigan. Winters, she headed north to ski at Boyne Mountain.

When the homeowners purchased the property, situated on East Grand Traverse Bay across from Old Mission Point, their top priority was to maximize the view and use all 60 feet of buildable lot, says Phieffer. To do this, they used eight-foot-tall sliding French doors with protective glass across the lakeside of the home. Carr, who specializes in lake homes, drew inspiration from coastal architecture found along the Eastern Seaboard and says the architectural style resembles a cottage on Nantucket, where the homeowner spent weekends while growing up outside of Boston. Exterior highlights include cedar shake siding and standing-seam metal roofs. 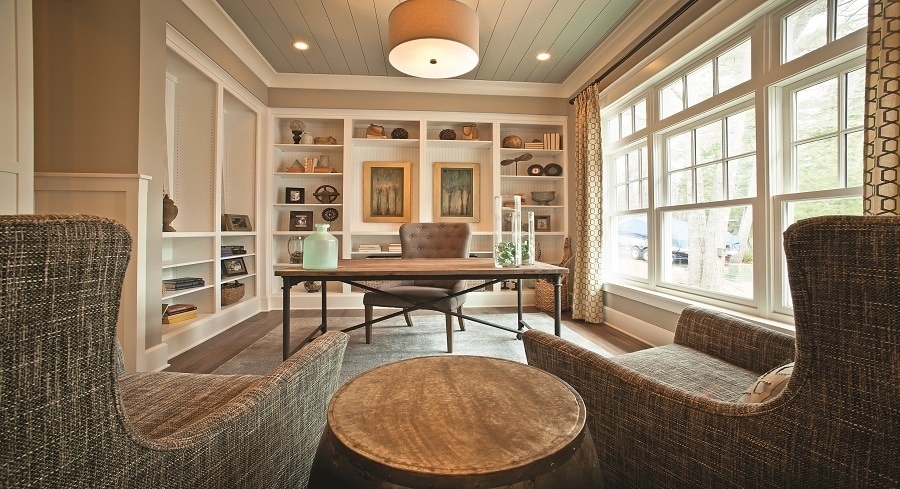 Tongue and groove woodwork on the office ceiling adds architectural interest. Nautical and antique pieces are displayed on the built-in shelves.

The home’s interior is flooded with light and views, thanks to those eight-foot-tall French doors on the lakeside first level. On the second floor, a rooftop cupola that allows more natural light to pour in complements light from the generous windows. The open-concept great room floor plan was designed to be practical for large family gatherings. Neutral and watery colors, as well as nautical elements, unite the home’s decor from top to bottom. Interior designer Kim Pheiffer had worked with the client on other homes and was brought into the project while the house was still under construction. “The client has a great eye for design, and many of the items such as flooring and some lighting had already been selected, but they relied on our team to pull the whole look together with furniture, rugs, window treatments, wall decor and accessories,” she says.

The home’s pièce de résistance is a timber-framed lake room located off the dining room. A bluestone floor and reclaimed barn wood walls set a rustic Up North feel, while two of the walls are 95 percent glass, offering an unobstructed view of the water. A 101-inch-long sofa and swivel chairs let the homeowners take full advantage of the views. All three team members cite the lake porch as their favorite room in the house. 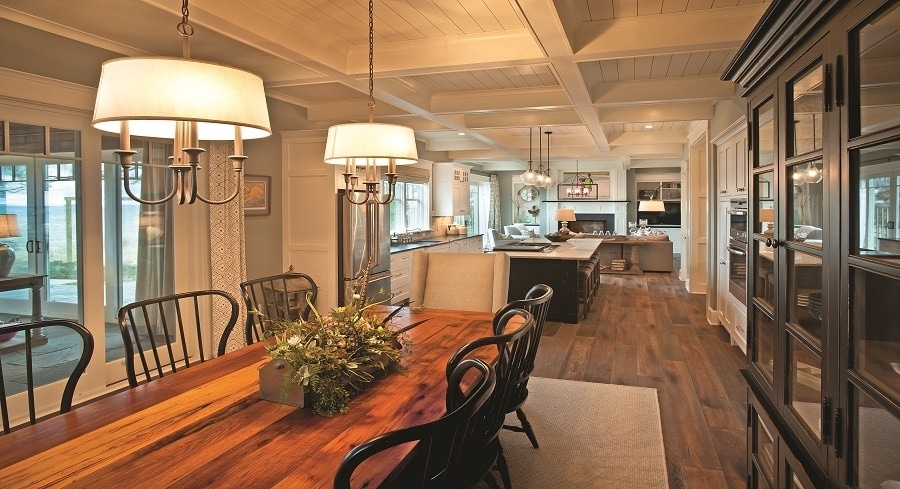 An oversized window at the kitchen sink allows for water views; soapstone countertops add texture. The dining table is custom.

The homeowners and their extended family use the property year-round, the builder says, adding that they like to snowmobile in the winter and salmon fish in the fall. Along the way, architect Tim Carr and his family fell in love with Northern Michigan. “The water, the sand dunes, vineyards and overall beauty,” he says, adding that he’d love to tackle more Northern Michigan projects.