A Burt Lake Home Gets a Beautiful Renovation 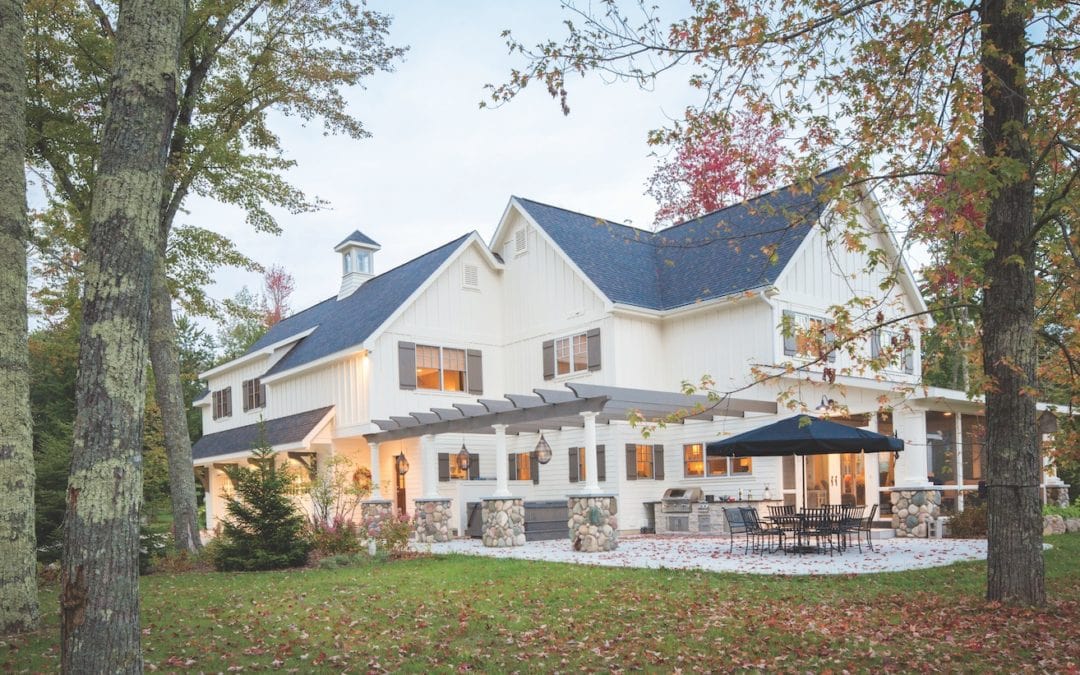 This Burt Lake home (complete with an indoor basketball court!) gets the perfect renovation. Take a look inside. 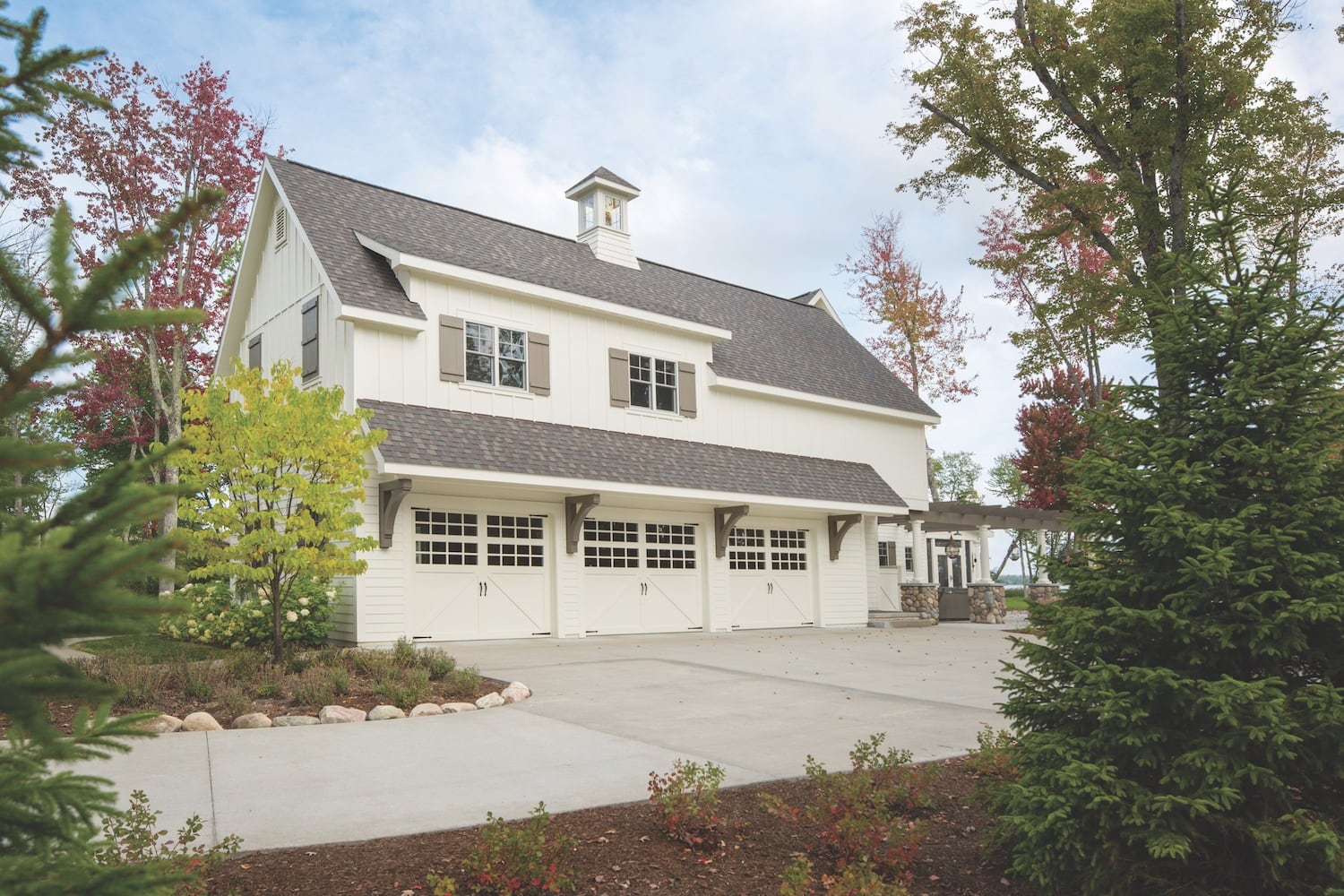 Ann Doman has spent many Christmas holidays skiing Up North—at several resorts, including Boyne Highlands, where eventually she purchased a condo. But once her two sets (yes two sets!) of twins were grown and starting families of their own, she started searching for a standalone home big enough for her family to gather during both winter and summer vacations. Ann had dreamed of a log home, but when she found a contemporary farmhouse, built in 2011, for sale on a spectacular piece of Burt Lake frontage, it more than quelled her desire for a structure that felt true north. One unexpected but sweet perk was an athletic room above the garage that was outfitted with a small indoor basketball court. With one grandchild already and another on the way, it looked like the ultimate rainy day space at grandma’s house. 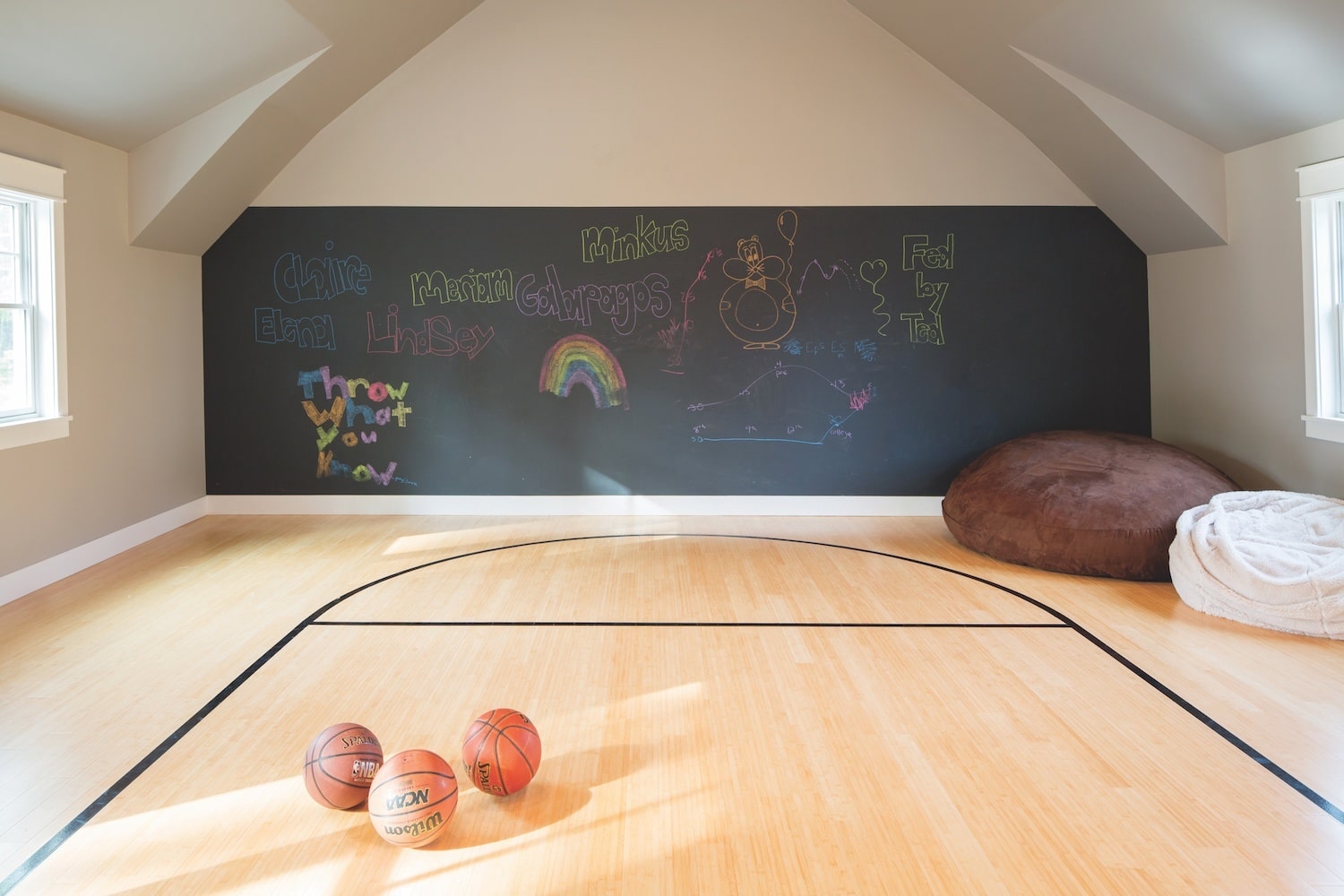 The chalkboard by the basketball court was Ann’s addition.

Even as she was purchasing the home, Ann knew she would want to add more bedrooms and bathrooms to accommodate her entire family. Fortunately, she was able to hire Gary Nance (Gary Nance Design), who was the home’s original architectural designer. Gary was more than willing to take on the project. He’d designed the home for long-time clients who have become friends and were pleased with the outcome. As he points out, the home’s contemporary farmhouse style was cutting edge at the time, as were fabulous features including a pantry, open on both ends, that wraps around the back of the kitchen—making for plenty of storage as well as a place to stash dirty dishes during dinner parties. 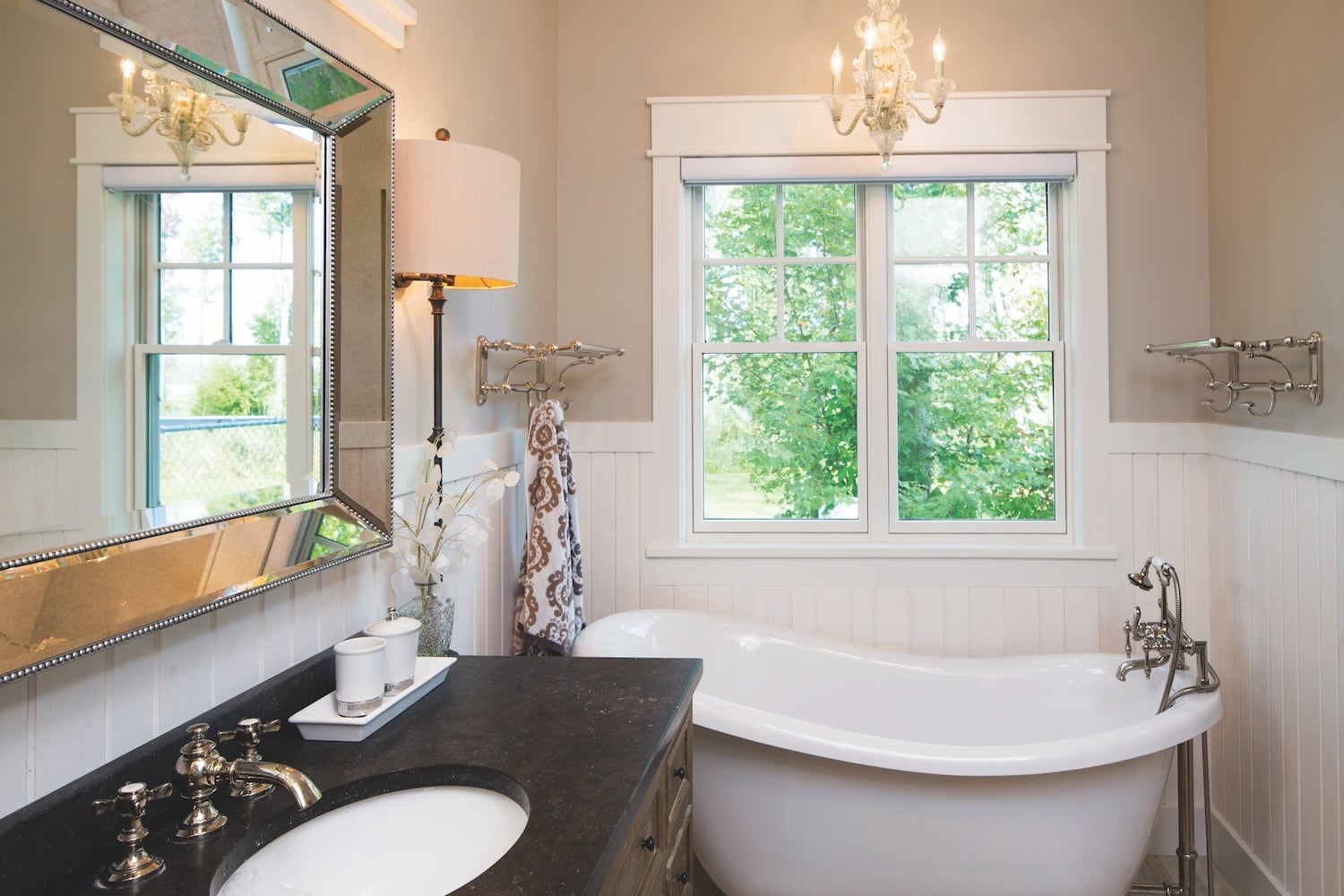 The soaker tub was original to the house, but Ann updated the rest of the bathroom.

Working with Gary, and Ken Provost of Birchwood Construction, Ann added on two bedrooms, two baths, a Florida room, and an outdoor kitchen set in a handsome pergola. Since Ann oversees her own small design firm, Doman Designs, she set about updating many of the surface materials, including replacing the flooring with rustic reclaimed wood and new granite countertops in the kitchen. She had a fireplace added in the master bedroom and enlarged a fireplace in the kitchen. And that basketball court received new tile work around its perimeter. Bring on those grandchildren! 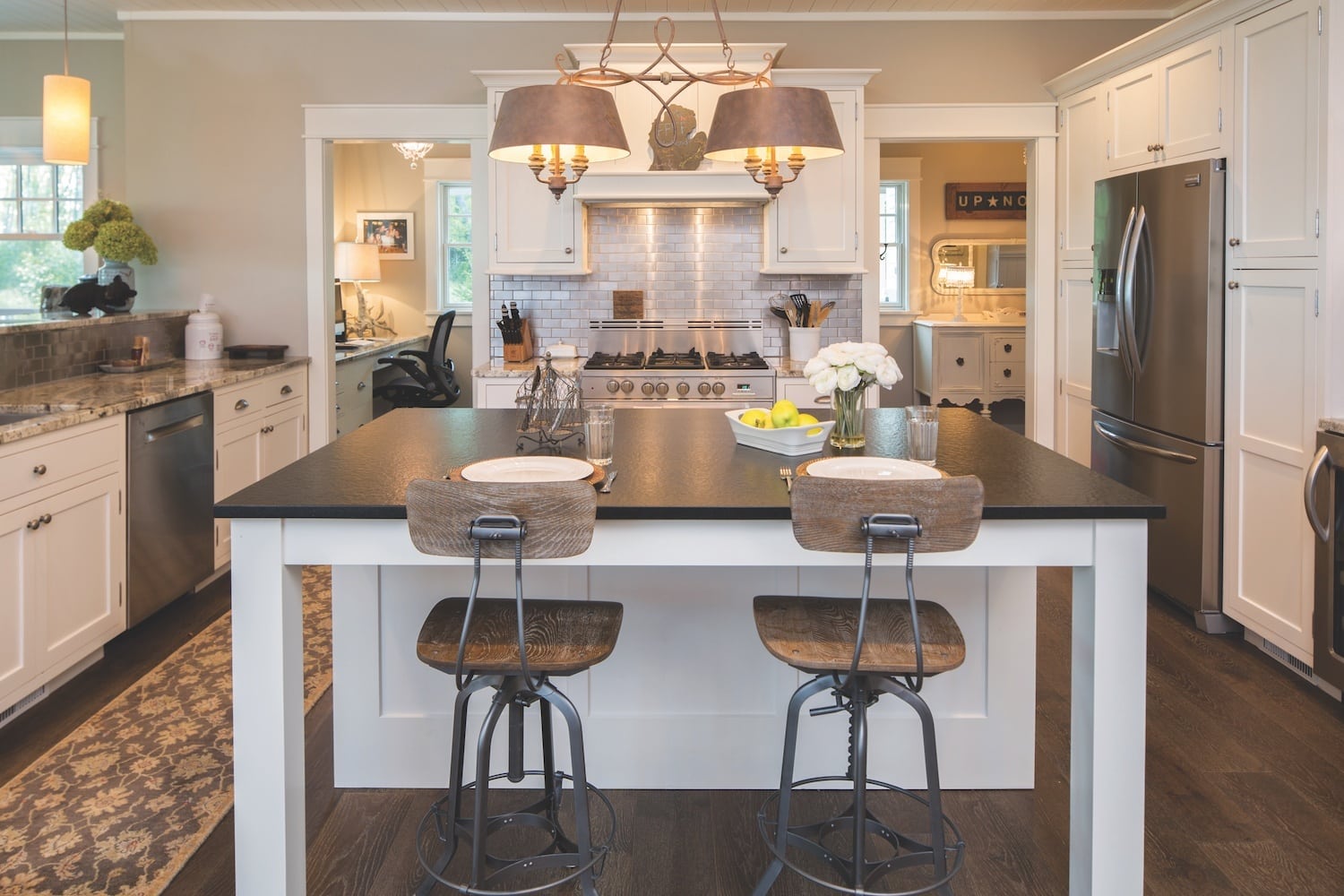 New granite kitchen countertops including the ashes-finished black granite used on the island, as well as the fireplace hearth and outside kitchen counters—all from Capital Granite in Petoskey. 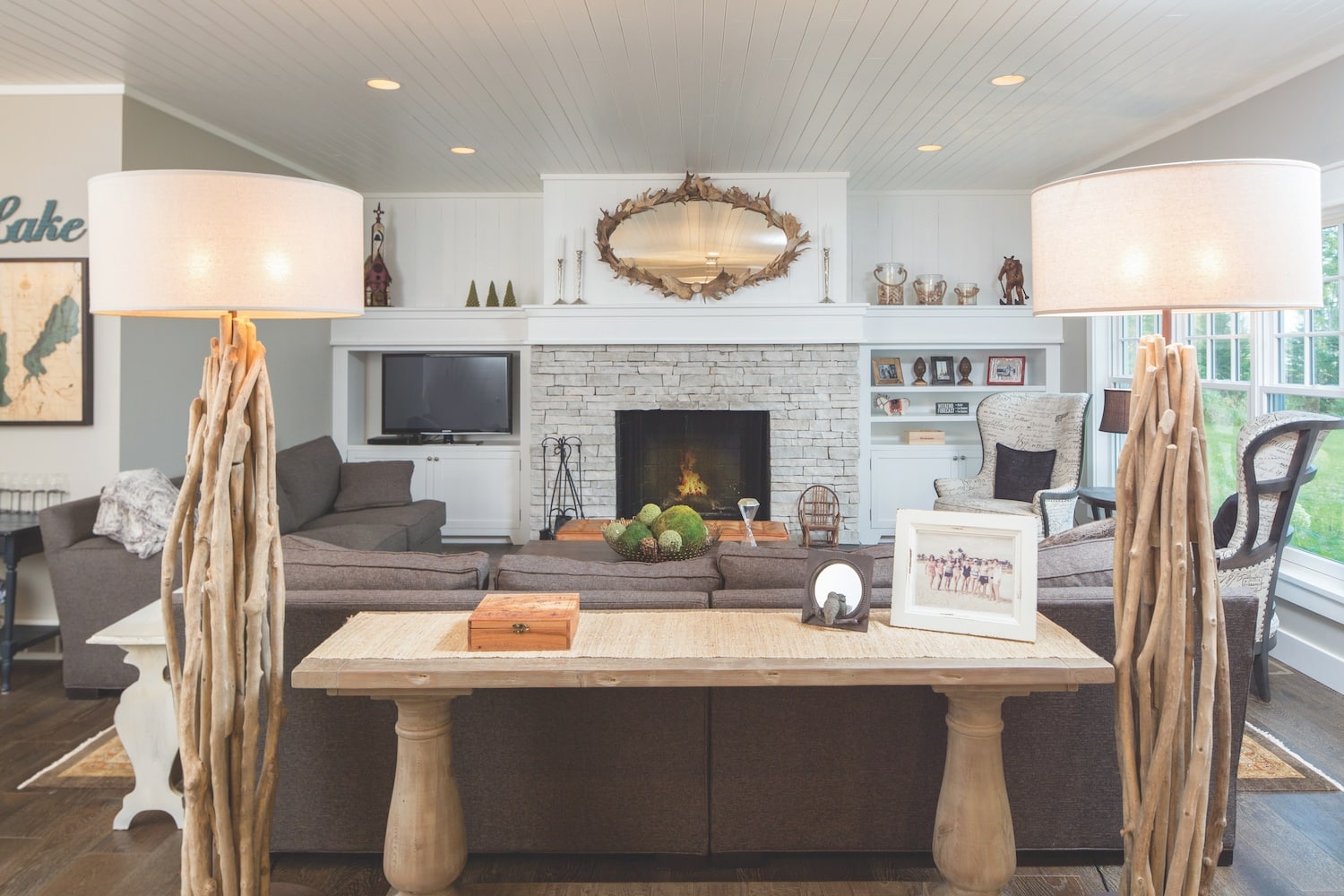 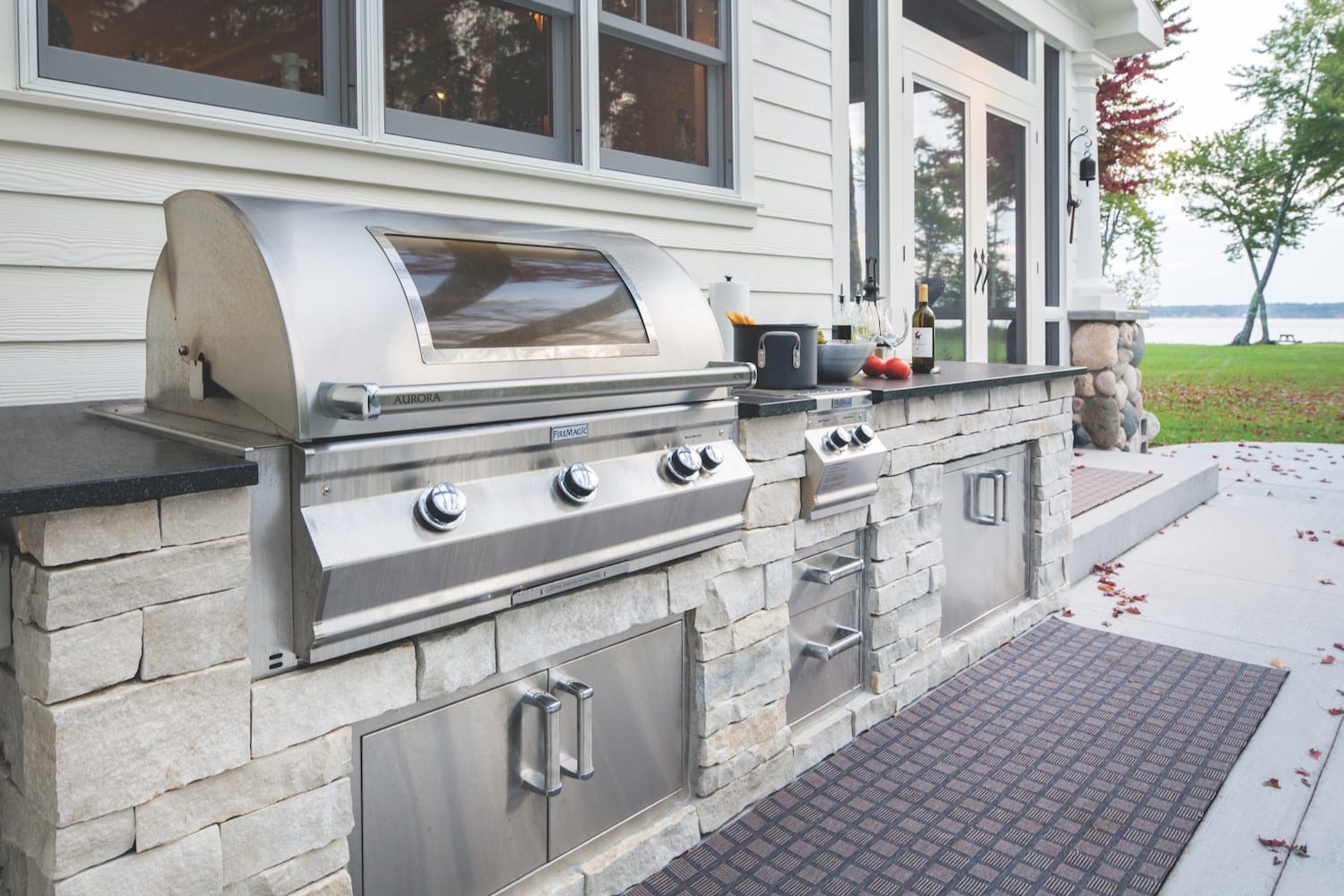 Fireplaces and outside grill stone are ledge stone from Emmet Brick and Blow in Petoskey.

This home is featured in the December 2017 issue of Northern Home & Cottage, a bimonthly publication included in all subscriptions to Traverse, Northern Michigan’s Magazine. Subscribe.