Life at Point Betsie Lighthouse was Heartbreaking, Exhausting & Beautiful in the 1800s 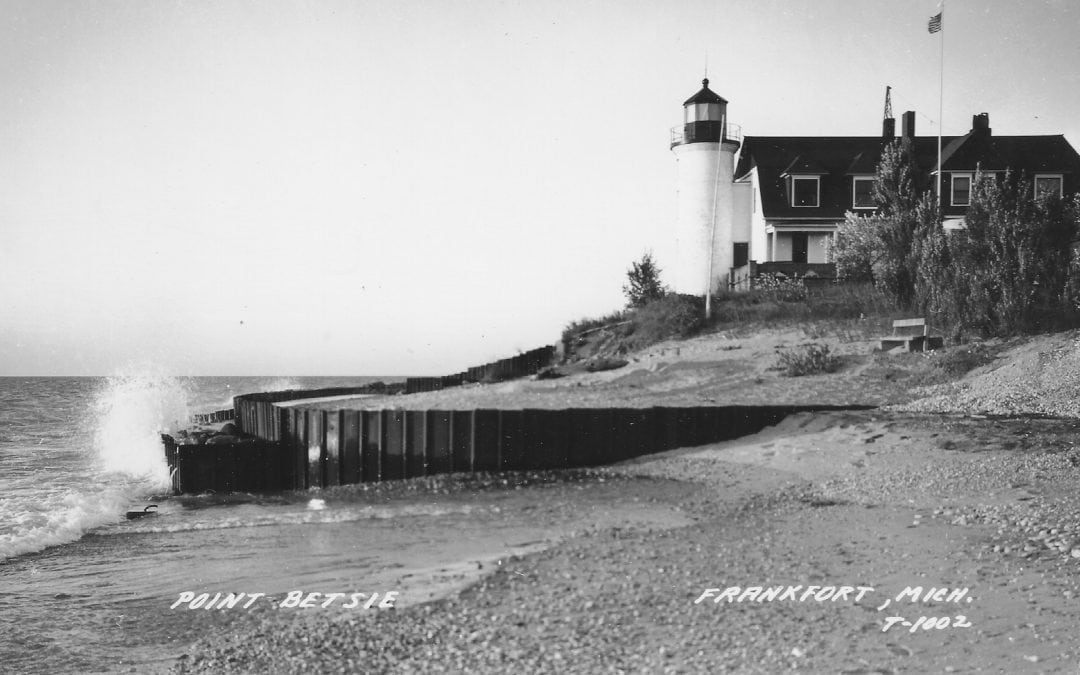 Her great-great-great grandparents Alonzo and Alice Slyfield first kept the South Manitou Lighthouse from 1853 to 1859; then Point Betsie Lighthouse for another 20 years. Here Julie Case tells the family stories of the “wickies” who cared for two of Northern Michigan’s most iconic lighthouses.

June 8, 1854, and it’s snowing. There’s no electricity in the South Manitou Lighthouse set on a sandy knoll near the Lake Michigan shore, nor in the rudimentary stone keeper’s quarters below it. The short rubblestone house is deteriorating—the eaves rotting and the fireplace collapsed. Outside, the snow falls to six or so inches before the rain begins, and the J.Y. Scammon is washing ashore in the storm. Inside, Alice Slyfield is giving birth to her second child, Charles B. Slyfield.

Alonzo is on the watch when he sees the brig come in, and rushes to help the passengers get from ship to land. It’s only after he returns to the lighthouse, along with the shipwrecked crew, that he learns his son has been born.

“On our return with the shipwrecked crew to the lighthouse, we found that during my absence I had been blessed by the arrival of an eight-pound blue-eyed boy, and there was indeed a feeling of happiness in the station that night, and I felt satisfied that I had accomplished more that day than on any other day of my previous life,” wrote Slyfield in recommending that son, Charles, for a position with the United States Life Saving Service in the early 1880s. 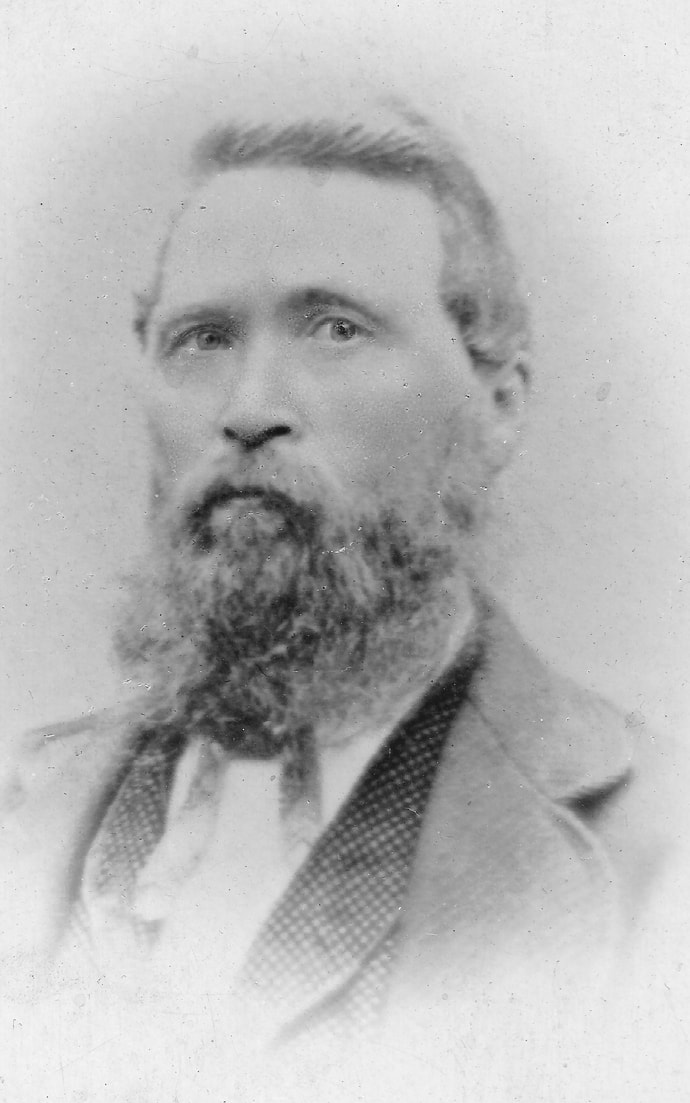 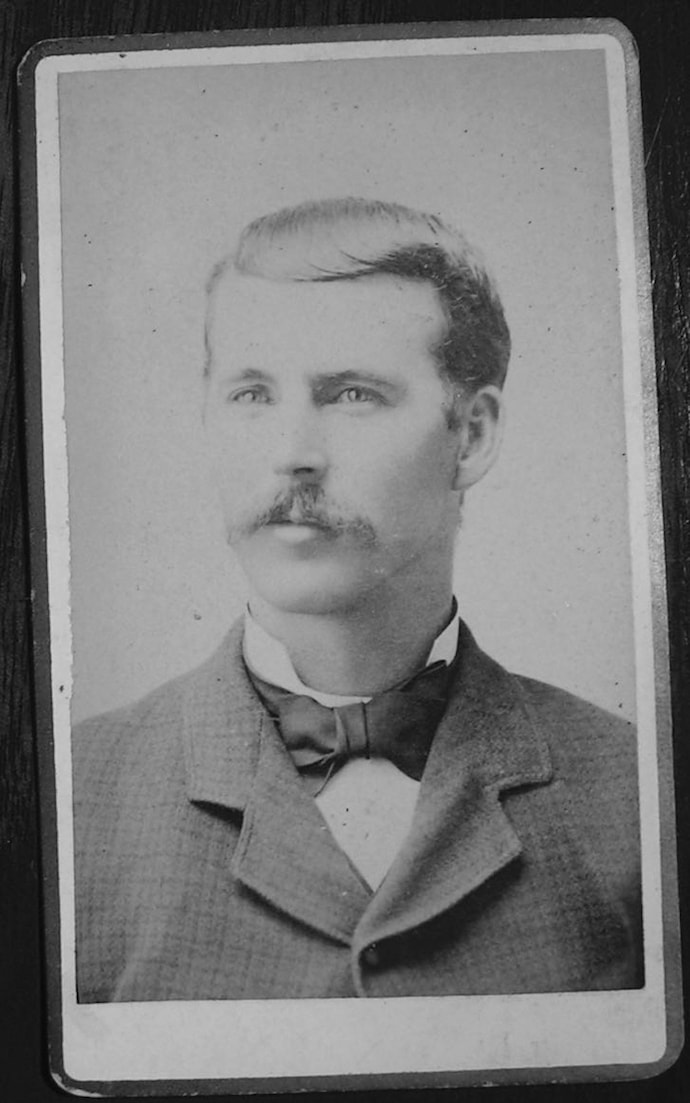 From 1853 to 1859, Alonzo and Alice kept the light—a central oil lantern surrounded by 11 oil lamps—on at South Manitou. They quartered the men who were building the new keeper’s quarters in 1858, and they assisted with other wrecks, such as that of the schooner Mina Kinny, all while earning a very small salary, until Alonzo resigned in 1859 and the family, now grown to four, moved to the mainland. Their time away from lightkeeping would be short-lived.

Alonzo was already on the mainland, building a house north of Bar Lake, when Alice and the children made the mid-July voyage over in a Mackinaw boat to join him in 1859. Three-year-old Mary became sick along the way. Some three weeks on, on August 15, Mary finally began to appear better, and so Alonzo took leave of the family and headed by boat for St. Clair where he had business. But she was not better. At sunset that night, the family shrank to five when Mary died of dysentery.

The family spent two years in that house before Alonzo got an appointment to keep the lighthouse at Point Betsie, which had been built in 1858. On September 9, 1861, the family loaded their household goods into two boats and made the trip to the light, towing the boats along the shoreline until a wind picked up at Platte River and they sailed the rest of the way, landing at 2 p.m. In those days, numerous Native American families lived in the area—camping at the shore to hunt and fish through the summer, moving up one of the local rivers to trap and hunt in the winter, according to Charles’s autobiography, A Brief Sketch of the Life of Charles B. Slyfield. Yet once the former keeper, Peter Barnes, left the lighthouse, the Slyfield’s only permanent neighbors were one mile north, and one mile east on the Crystal Lake shore.

In 1861, the lighthouse at Point Betsie was a brick structure with a 37-foot tower, at the top of which hung a decagonal cast iron lantern. That light, a Fourth Order Fresnel lens, was centered around an oil lantern that consumed 5.25 ounces of oil each hour and burned from dusk until dawn. Rotating around it, powered by a clockwork type mechanism, were hundreds of glass prisms that reflected that light, 53 feet above lake level, flashing every 90 seconds and visible some 10 miles away.

For 21 years, the Slyfields kept the light on at Point Betsie, living at the lighthouse, and it wasn’t only Alonzo doing the work. When he was called away to care for the sick—he also had training in natural medicine—the responsibility for fueling, operating and maintaining the lamps would fall to Alice. It’s hard to imagine climbing the steep stairs to the lamp in the dead of night, a wind howling outside and numerous children below. When they arrived at South Manitou in 1853 it was just Alonzo, Alice and their oldest daughter, Ella. By the time they landed at Point Betsie in 1861, the family included also Charles and Edwin, with Mary deceased. From 1862 to 1871 the couple would have three more children: Elmer in 1862, George in 1865 and a final daughter, Jessie, in 1871. In fact, Alice was already a grandmother—Ella’s first was born in 1870—when she became a mother for a final time in 1871.

The family didn’t, however, just tend the flame. They also gathered what came ashore. In 1863, in the middle of the Civil War, that included barrels of flour thrown off a passing propeller boat, which ran ashore at Sleeping Bear shortly afterward. It took six hours for the barrels to float to land. By the time the Slyfields got them home and had the flour repacked it came to 60 barrels—enough to keep the family in flour for years, and enough to sell to settlers from Benzonia, too. The Slyfield’s neighbor, Joe Oliver, got about 40 barrels as well. 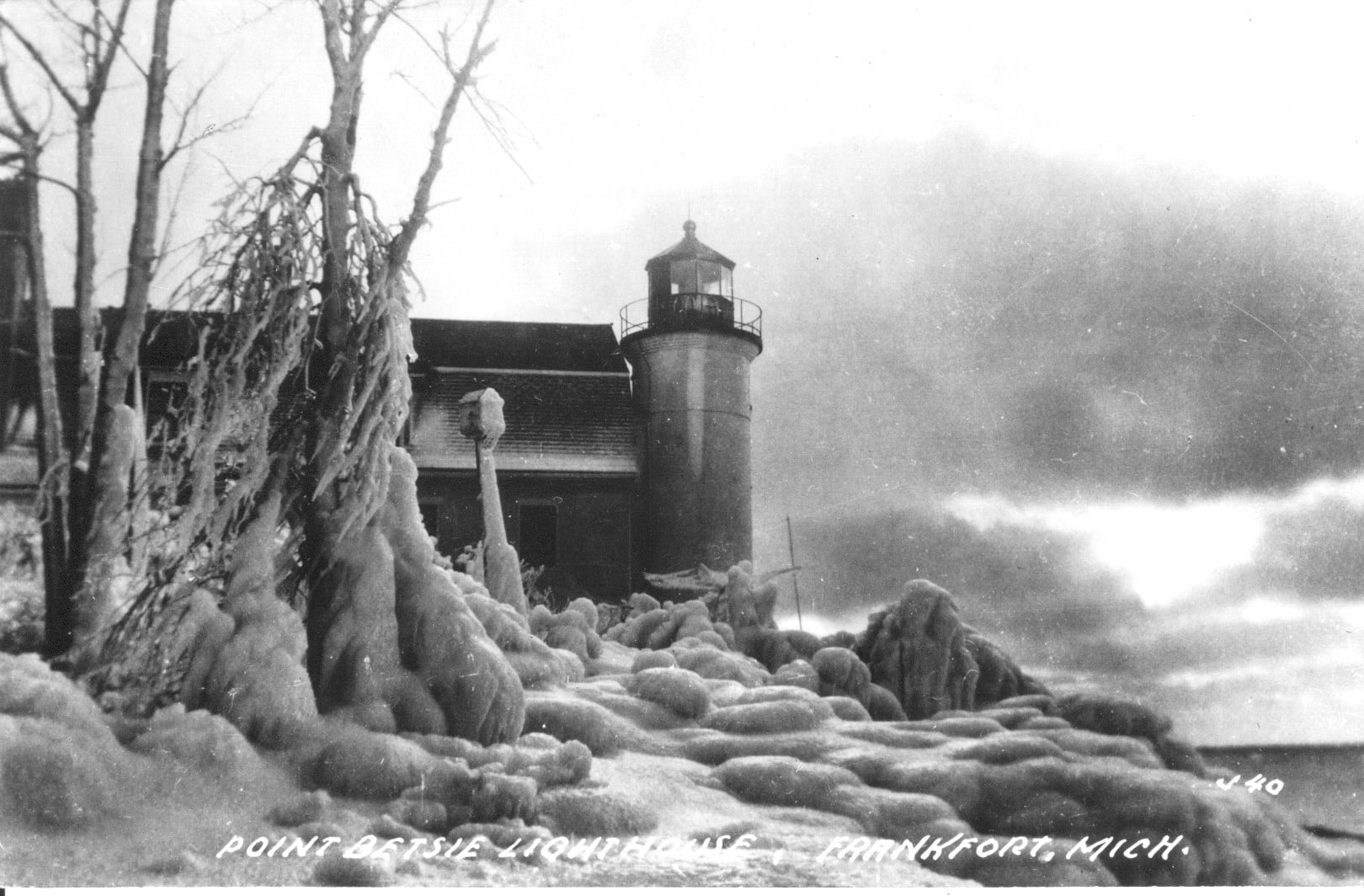 Charles and Ella went away to Benzonia for school in the winter of 1865, living in a rented log home nearby with a young widowed woman to keep house for them. Come late March, Alonzo took a horse to fetch the children, traversing the length of the ice-covered Crystal Lake, to get them home. Only eight years later, the lake would dramatically drop 20 feet with the attempt to create a channel connecting it to Lake Michigan.

The water just beyond the point acted as a transit lane, too. The Ann Arbor Railroad didn’t begin service between Toledo and Frankfort until 1889, and what Charles calls “the state road” was only completed in 1870, and then was still rough. Instead, passing propeller ships would stop offshore, or in Frankfort, to deliver the occasional supply, or take things away—the half barrels of salted fish Alonzo and his sons would catch and sell. In those days, if the lake was calm, propellers would always stop when flagged, explains Charles in his autobiography, as they knew the keepers had no other way to ship anything. They took on people, too.

“The Benzonia people would come to the Light in the early days of the colony and have Father put them aboard some passing propeller so they could get away from the wild and wooly part of the country,” he writes.

Other people came to the light by less pleasant means. In October of 1871, two schooners came ashore; one roughly 4.5 miles north, a mile shy of the Platte River; the other, The Comet, on a bar about a mile north of Point Betsie, likely near where Crystal Downs stands today. The morning after, Charles awoke to see a man walking to the lighthouse in soaking undergarments. At the fire, they warmed and dressed him, and learned the man had swum to shore with a line tied around him but was so cold he couldn’t tie it to anything and instead wrapped it around a root before coming to the lighthouse for help. By the time the Slyfields arrived at the wreck others were also on site. Together, they tied the line to one end of a flat-bottomed skiff and buoy lines the Slyfields had brought to the other end, allowing the crew to drag the skiff to The Comet and climb aboard in twos, so the men on shore could pull it to land. It would be the first true lifesaving mission at Point Betsie—one that preceded the building of the lifesaving station on site by four years.

In 1882, some 21 years after he’d first begun tending the Point Betsie Lighthouse, Alonzo retired from the keeper’s position, and his son Edwin took his place until 1888. 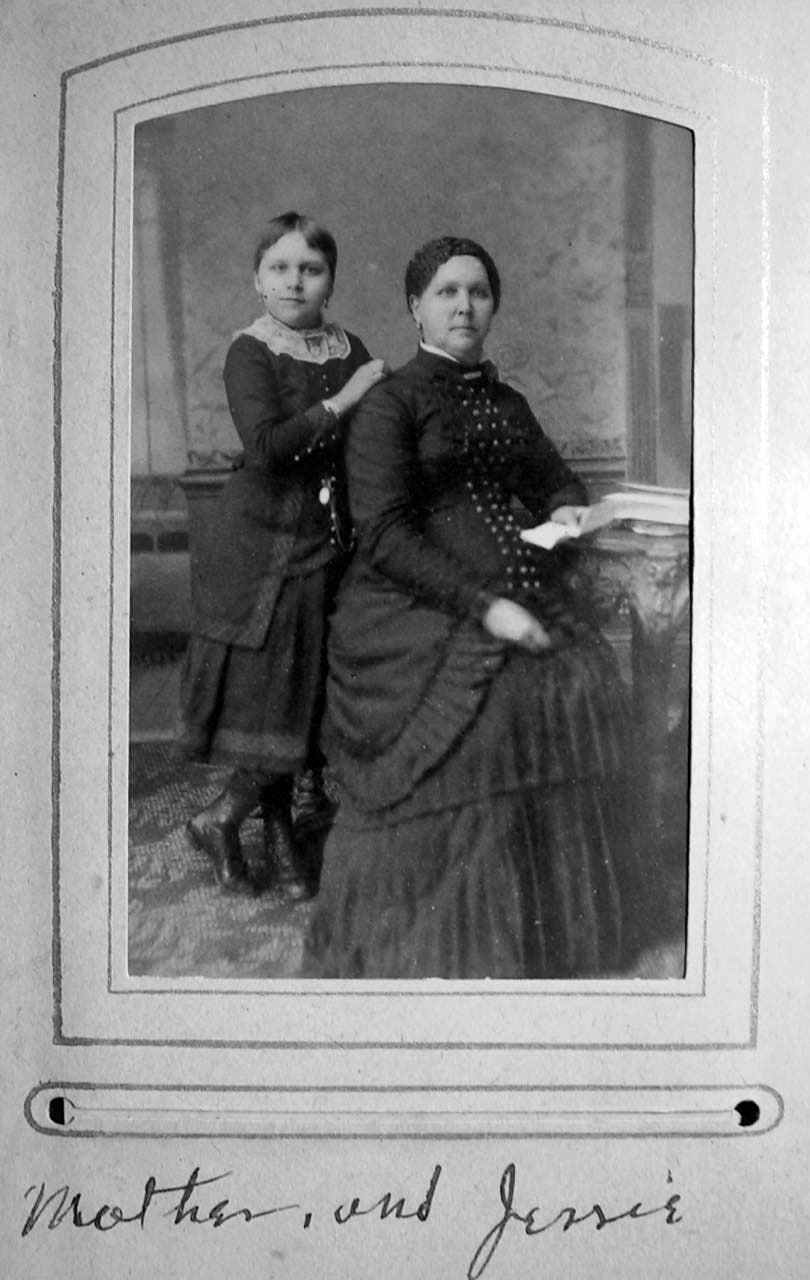 For 165 years, from the first light in 1858 to the last in 1963, the lightkeepers, a.k.a. “wickies,” kept house at Point Betsie, and for most of that time they fired the lamps by hand. It was only in 1921 that the station hooked up to the electric grid and an electric bulb was installed in the lens. With automation came a reduced need for lightkeepers altogether, and the last keeper retired from Point Betsie Lighthouse in 1963, although it wasn’t completely automated until 1984.

Today, Point Betsie continues as a lighthouse. Visitors can tour the original home, climb the steep, narrow stairs to see that light for themselves and look out over the vast expanse of Lake Michigan—past the point that claimed The Comet, and on to where the Scammon sank.

Want to live like a lightkeeper for a week—with some modern comforts? May through October, the Point Betsie Keeper’s Quarters can be rented by the week.

Julie H. Case is the great-great-granddaughter of Charles B. Slyfield. She relied on his autobiography, A Brief Sketch of the Life of Charles B. Slyfield, a family history of the Slyfield wives written by Sherrie Risch, and numerous historical documents in writing this story. When Julie isn’t writing about travel, wine, or weird science, she can be found deep in America’s forests, foraging for mushrooms, which she blogs about at soIgather.com.  // Images courtesy of the Benzie Area Historical Society and Sherrie Risch.