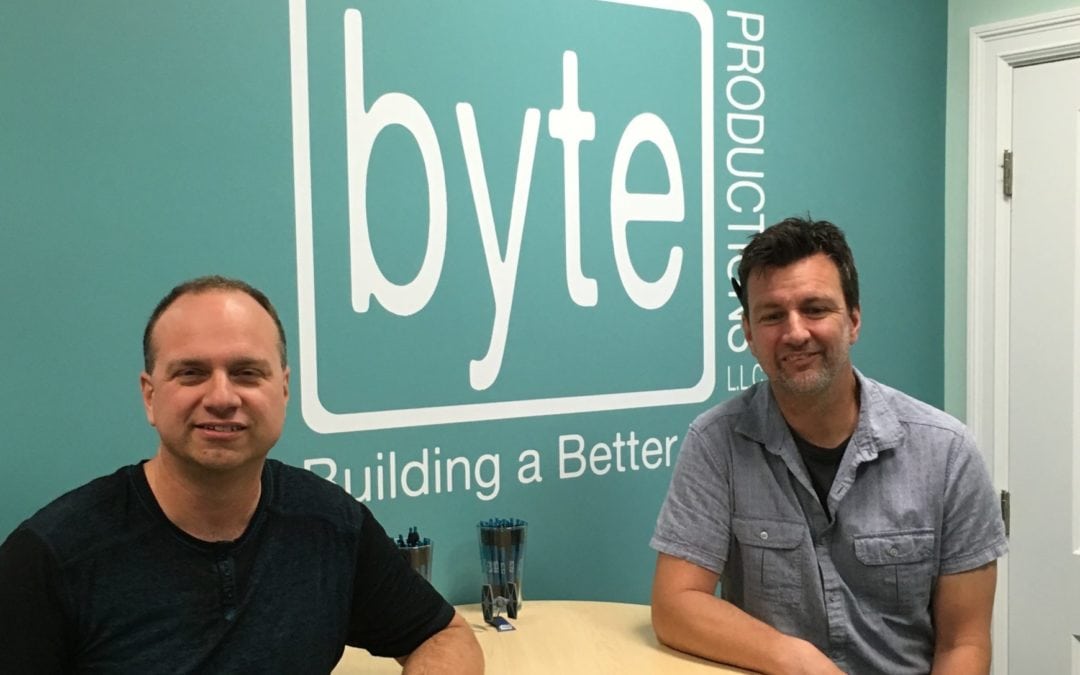 Byte Productions is a Traverse City technology company that specializes in web design. MyNorth Media writer Ross Boissoneau gives a rundown on the history of Byte Productions and the important work the firm does.

Tim and Tom Barrons never set out to be web developers. For one thing, the brothers were looking at becoming an artist and a musician, respectively. For another, when they started out, there was really no such thing as the web. But from their beginnings in an ad agency, they developed the skills that would land them in the forefront of the web revolution.

At that time, circa the late 80s, the various ad agencies, newspapers and print shops boasted voluminous catalogs of clip art. Tim began working on converting the catalogs to vector art. “At the time, computers weren’t major tools in graphic or print shops,” said Tim. Meanwhile, Tom was working on MIDI projects, the then-nascent technology allowing electronic instruments to connect with computers and one another.

Still, at the dawn of the 90s, the web wasn’t even a thing yet. So in their desire to become all things computery to ad agencies and service agencies, Byte Productions began working in multi-media, including CD-ROMs. “We started with art. We had a lot of good accounts to start with (their own and those subcontracted to them), like Steelcase and Daiwa. In two or three years we were working in multi-media, building clip art,” said Tim.

Then the web hit, and the two found themselves in the right place at the right time with the right skills. “When we started, we predated Windows,” said Tom. “It was all Macs,” added his brother. “Pagemaker 1.0 on a Mac Plus. All the stuff we used was version 1.”

As the technology grew, so did the web. And so did Byte Productions, as they found old accounts moving into the brave new world of the internet and new ones springing up in its wake. Back then, creating a website meant having a URL with a static page that would provide some information about the company, what’s now popularly termed “Brochure ware.” Contrast that with today, where being online is all about providing interactive design for their clients.

Today, from its offices at 444 Cass Street, Byte Productions still works with agencies across the country and directly with clients as well. Roughly half the work is for brand new sites, the other half redesigning and writing new code for established sites. “We’ve added some services, grown with the times,” said Tom, citing areas such as reputation management and site engine optimization. “That’s what’s kept us in business for 25 years.”

Through the years, the brothers have seen their roles change as the technology has changed. “I find myself doing programming for e-commerce (sites). I never envisioned myself doing that,” said Tim. “I’ve always been doing programming. But I’ve had to learn six different languages and operating systems,” said Tom.

And the changes keep coming, at increasing speed. The trend toward mobile has Byte currently working on responsive design. It provides users with easy reading and navigation with a minimum of resizing, panning, and scrolling, whatever the device being used – mobile phone, tablet, or a desktop monitor. “It’s a different world,” said Tom. “Everybody carries a computer in their pocket.”