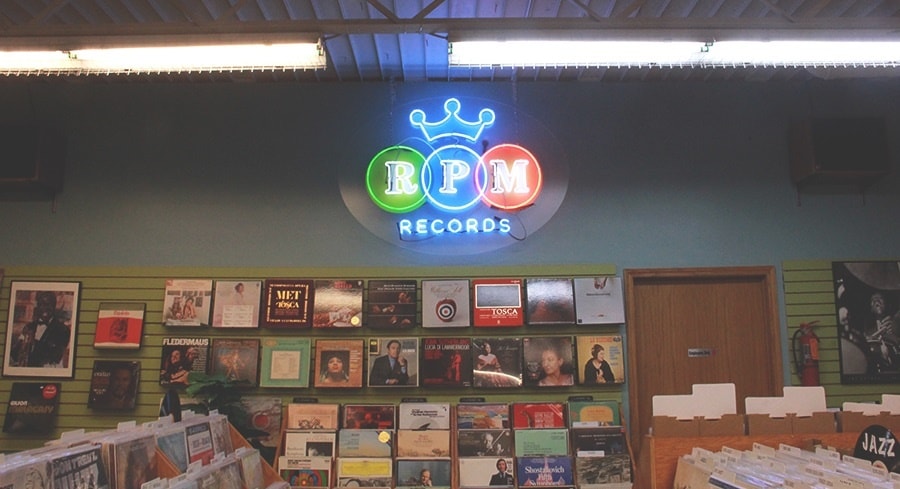 As founder and proprietor of Traverse City’s RPM Records, Greg Walton takes great pride in his profession. His store is one of the few of its kind in Northern Michigan, so for him, doing it right is of the utmost importance.

That’s a heavy standard to live up to, but it’s hard to argue RPM Records hasn’t done it. The second you step into the store, you’re immersed in a gleaming, spacious interior where a pure love of vinyl abounds. There’s no dinginess, claustrophobia, or dust; it’s a thoroughly modern-day nostalgia paradise. Over 62,000 records are racked out front, all personally hand-cleaned and organized by alphabetical order. Every genre imaginable is represented, from blues to classical to children’s music to environmental noises. Vintage rare pressings to the latest reissues all line the shelves. It would be overwhelming if it all weren’t so neat.

“Customers always say they’ve never seen a store this organized,” Walton says with a grin. “People are maybe used to going to places that are dumpy or don’t have their records alphabetized. That’s when the quality of this store shines.”

The store’s devotion to the vinyl form is paramount. It’s in the name itself—RPM stands for revolutions per minute, a measure of rotation frequency utilized by turntables. The album stock is entirely vinyl—there are no CDs, and the only cassette tapes available are blank. In addition, you’ll find posters, coasters crafted from damaged records, and most interestingly, vinyl accessories and sound equipment. Turntables, needles, gauges, wipes, spindles, and speakers; it’s all here. If a customer needs help fixing or customizing a system, they can have it done at the store and walk out with a fresh record stack while they’re at it. This is not a feature common to most record stores, which speaks to Walton’s extensive experiences with both vinyl and its technology. 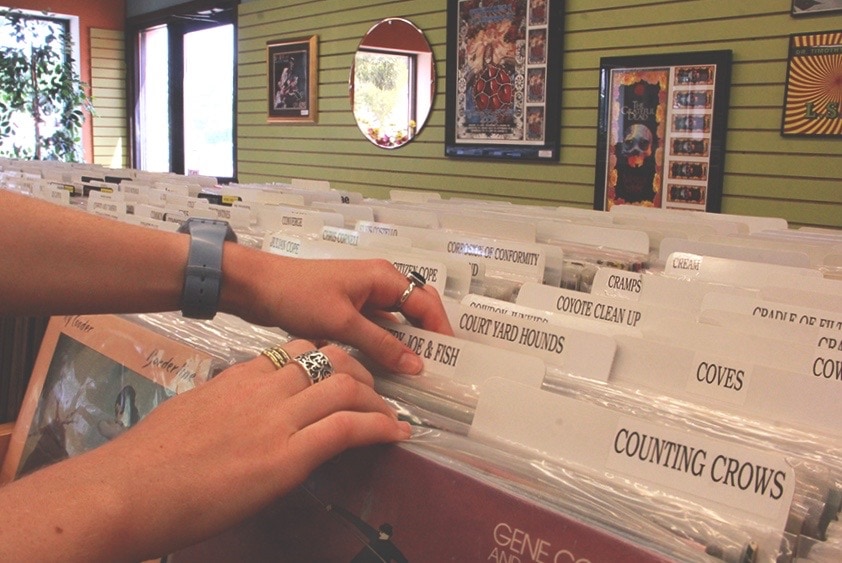 A native of Traverse City, Walton worked in local record stores during high school and helped run a Lansing music store right after college. In 1989, he moved back home and co-founded a home theater equipment store called The Sound Room, setting up shop on South Airport Road. During that period, Corner Record Shop was the area’s leading record store. However, in 2010 Corner closed their Traverse City store and moved locations.

“We had started selling vinyl on a really small scale, and when we heard that [Corner Record Shop] was closing, I figured there’s a need that was being left,” explains Walton. “Traverse City needs a record store. It’s a very artsy area.”

Inspired to fill that void, he closed The Sound Room and built RPM Records just down the road. The store quickly attracted customers from the Northern Michigan area, who raved about its extensive collection, quality control, and friendly atmosphere. People came by to casually browse, request certain LPs, sell off their collection, find turntable accessories, or just chat with Walton and his staff.

“The customers are wonderful,” he says. “We get a good mix of both older and younger folks. And I don’t just talk to my customers about records. It can be about anything: cars, concerts, news, and so on. I can bring my dog, Leland, and he gets as much attention as anything else.”

Traverse City’s plethora of festivals and events doesn’t hurt in bringing new customers either. “Anything that brings a lot of people to Traverse City, there’s always a small percentage of those people looking for record stores. Plus, a lot of the bands that play around here come in. I even get TV newscasters!

“When people see this place, you’re on their radar. Then they always come back and visit.”

Throughout the years, the business keeps growing. More customers lead to more vinyl, more equipment, and more money. Walton realized that if he wanted to keep an efficient business, he’d have to expand further. Thus, he moved the store from South Airport to Hannah Street this past year, a transition he found considerably worthwhile.

“Our business has definitely gone up since we’ve moved. We’re in a larger location, we’re closer to town, we’re in a neighborhood, and the bike trail’s right behind us. It’s a little quieter since traffic isn’t as crazy out front,” Walton says.

Going strong with six years of success, Walton considers RPM Records a triumph. “I think we’re up there with Michigan’s top record stores, even those which have been around for decades. Compared to others, we’re physically larger and we carry more inventory. People come here for the experience.”

Running a burgeoning record store in the streaming age may seem anachronistic, but in reality, it’s reflective of a growing movement. Vinyl fell out of favor with the advent of the digital age, but it has seen a massive resurgence throughout this decade. Niche stores are flourishing again, new stores are popping up by the dozen, artists and labels are releasing vinyl pressings, and reissues of classic albums are all the rage. For younger listeners, it’s an intimate alternative to the CDs and mp3s they grew up with. For some older fans, it’s always been the definitive form for recorded music.

Because of this, Walton says he doesn’t see RPM Records or other stores like it going away anytime soon. “There’s really nothing on the horizon that’s a replacement for the sound quality. I think we’ve all been through the digital realm, and it just doesn’t have the depth. I don’t see [vinyl] going away again. Really, it didn’t go away for a lot of people, it just got tough to find.”

As music fans once again find personal worth in vinyl, RPM Records continues to serve an important mission in Northern Michigan’s music scene.