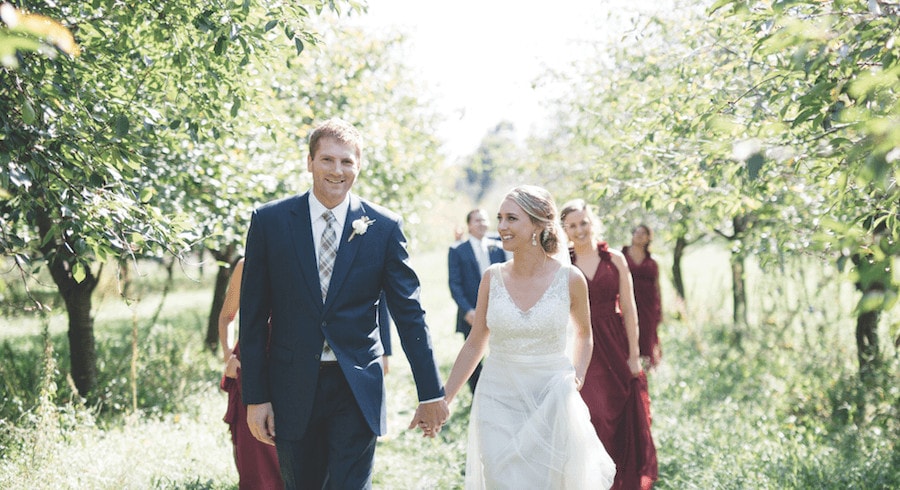 Growing up, Melissa Venuto spent her summer vacations in Leelanau County working at the local shops and restaurants in Leland. Soon the lakeside community became a second home to her, and after her fiance Derek Rothhaar proposed, she knew she wanted to be married there.

The couple chose Leland Lodge as their reception venue because of Melissa’s personal connection to the business, and because it offered a convenient spot for guests to stay. From the flowers and decorations to the food menu and location, the couple’s Leland Lodge wedding came together perfectly.

When Melissa Venuto was 15 years old, she spent her summer as a hostess at Leland Lodge—an experience she recalls fondly. Years later, she returned as a beautiful bride with her fiancé, Derek Rothhaar. “My parents have a cottage in Leland, so I have been going there ever since I can remember,” Melissa says. “I love Northern Michigan. It is a second home to me.”

After her parents bought the cottage in 2000, Melissa spent her summers in Leland, dividing her time between the sandy beaches of Lake Michigan and working at local businesses, including The Leland Lodge. “Once my siblings and I got older, we really enjoyed the town and how quaint it is,” Melissa says. 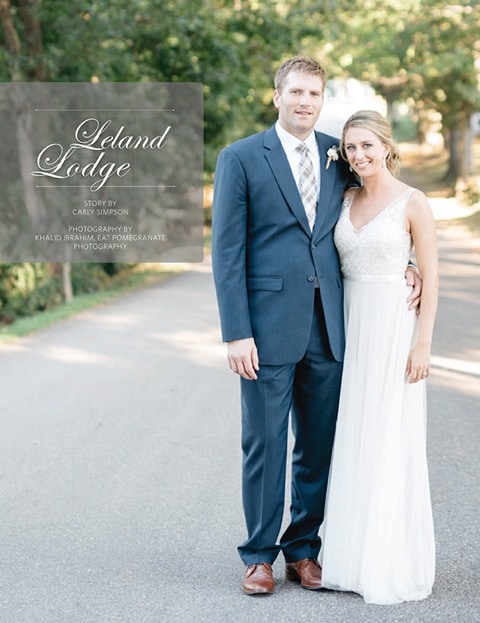 Click here to view the Leland Lodge wedding in the 2016 issue of MyNorth Wedding.

Forward 12 years and 1,200 miles away to Houston, Texas, where Melissa fell in love. She met Derek, who also grew up in Michigan, on Halloween weekend. They had both left their home state for work but ended up finding each other. “I knew early on that Derek was different, that he was someone who would take care of me in good times and in bad,” Melissa says. After dating for two years, Derek proposed on November 23, 2014. It didn’t take long for the couple to decide they wanted the backdrop for their wedding to be the picturesque Lake Michigan coastal town of Leland. The venue, of course, would be The Leland Lodge where Melissa had worked as a teenager.

For the destination wedding, the wedding party and guests rented out the rooms at Leland Lodge and several cottages. “We took over the entire town,” Melissa says with a smile.

The wedding ceremony, held on Saturday, September 26, at St. Mary’s, a quaint country church in nearby Lake Leelanau, was presided over by Father Michael Janowski. The cocktail hour and reception followed at the recently renovated Lodge, which provided the casual but classic atmosphere Melissa was looking for. “I wanted my wedding reception to be shabby chic,” she says.

The cocktail hour was held in the lodge’s fine dining restaurant, The Wine Cellar, which also catered the dinner. Tables were set up inside two of the lodge’s banquet rooms and also outside in the tented courtyard. The Leland Lodge has become known for its food—as witnessed in the elegant dinner which began with extensive appetizers including smoked salmon and whitefish dips with crostini, a local artisan cheese platter, bruschetta, bacon-wrapped dates, sausage puff pastries, spanakopita, and caprese sticks. Dinner continued with rosemary roasted redskin potatoes, Leland Lodge’s signature salad, sautéed green beans with vinaigrette and olive oil, and filet mignon with béarnaise sauce.

Guests spent the evening on the dance floor with a local band—the John Driscoll Ensemble made up by John Driscoll, Dan Reckard, Joe Dart, and James Cornelison. Later, guests gathered around a bonfire and were treated to s’mores and pizzas from the lodge.

But the party wasn’t over yet. The next morning, guests enjoyed brunch catered by Sisson’s Main Street Specialties at the Old Art Building in Leland. On that warm September weekend, the couple and their guests enjoyed the irresistible charm of The Leland Lodge and the natural beauty of the Leelanau Peninsula.

Click the cover to read the latest issue of MyNorth Wedding.