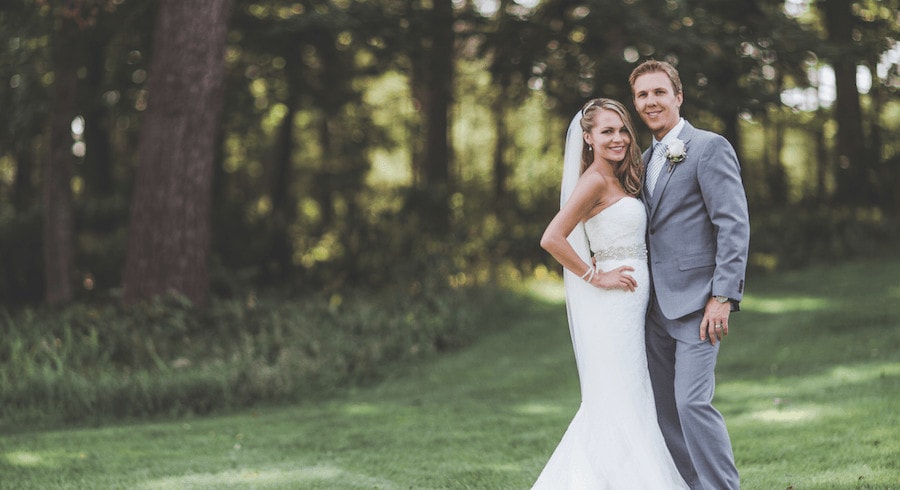 As children, Meaghan Howe and Doug Stoinski cherished their families’ Northern Michigan vacations. Their shared love for the area made it easy to choose to be married at The Homestead in Glen Arbor. Meaghan was thrilled to be able to share the special moment with her grandfather, and hockey legend, Gordie Howe.

The couple treated their guests to some of their favorite memories with local delicacies from Grocer’s Daughters’ Chocolates and Cherry Republic and a collection of places to visit in the Sleeping Bear Dunes National Lakeshore. The Homestead summer wedding was exactly what the couple had pictured.

This article was originally published in the 2016 issue of MyNorth Wedding.

All photography by Dan and Melissa Photography

During a hike on Empire Bluffs Trail, with its majestic and sweeping views of Lake Michigan, Doug Stoinski and Meaghan Howe decided to spend the rest of their lives together. That outing also led the Bloomfield Hills, Michigan, couple to decide to have their wedding, nearly two years later, at Glen Arbor’s The Homestead resort.

“The Homestead is the closest resort to the trail where we were engaged,” says Meaghan, who like Doug, vacationed in Northern Michigan as a child. “It was really special that we picked this place … We just felt that The Homestead had all of the elements of the atmosphere we wanted to create,” says the bride, adding that she loves the resort’s connection to the outdoors combined with its upscale amenities. “It feels magical when you pull in,” Meaghan says. 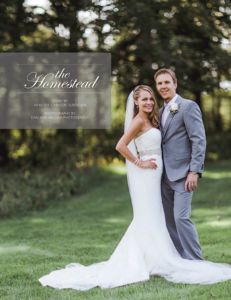 Click here to view Meaghan and Doug’s wedding in the 2016 MyNorth Wedding issue.

Having a vacation-worthy location for guests was also important—many of them stayed on site and for multiple days. To welcome guests to The Homestead, Meaghan and Doug provided a sampling of local treats. They offered delicacies from Grocer’s Daughters’ Chocolates, a gourmet chocolatier based in Empire, and tasty items from the Glen Arbor–based cherry-themed business, Cherry Republic. The couple also provided information about hiking and places of interest in the beautiful Sleeping Bear Dunes National Lakeshore that embraces both Empire and Glen Arbor.

Meaghan Howe, granddaughter of hockey legend Gordie Howe, and Doug Stoinski were married August 22, 2015. The 1 p.m. ceremony took place at St. Philip Neri Catholic Church in Empire, where bunches of lavender adorned the pews. After making the short drive from the church to the resort along the acclaimed scenic highway M22, guests were treated to an outdoor cocktail hour followed by the reception at The Homestead’s elegantly rustic Mountain Flowers Lodge.

Gordie Howe’s appearance at the reception was an emotional high point for the bride. “He had a stroke a year ago and wasn’t doing very well,” she says. “We didn’t think he could be there. But he came—just to the reception—and having him be there was one of the best parts of the day. When he saw me, he started crying … it was so sweet. I think it hit him and it hit me at the same time, how great it was that he was there.”

The remainder of the evening carried on that intimate feeling. “Our goal was creating for our guests an experience showing what we love about being Up North, and having them be able to celebrate that with us,” Meaghan says.

One memory the couple will always cherish was when staff at The Homestead drove them to the top of the resort’s ski hill to watch the sun set over Lake Michigan. “It was an unplanned, last-minute thing,” Meaghan says. “One of our wedding coordinators drove us up there herself in a golf cart just as the sun was setting. We had the videographer and photographer there. Northern Michigan is known for its sunsets, we were lucky to experience such a beautiful one on our wedding day.”

Photo(s) by Dan and Melissa Photography