Seth Bernard and May Erlewine Perform in Manistee 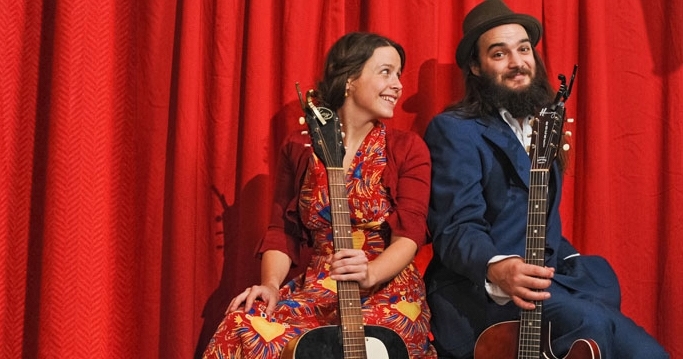 Seth Bernard and May Erlewine will hold two performances at the Ramsdell Theatre in Manistee on Thursday, October 8. MyNorthTickets is excited to be a part of this 10-year anniversary tour with the Copper country Quintet – Drew Howard, Micah Ling, Ian Gorman – which is presented in partnership with the Spirit of the Woods Music Association. There will be a special show for young audiences from 5:30 to 6:30 pm, and the feature concert begins at 7 pm.

Here’s a profile on this Northern Michigan music event:

Seth Bernard and May Erlewine

The native Michiganders (he’s from Lake City, she’s from Big Rapids) met in 2003, when Seth Bernard was performing at the Ann Arbor Folk Festival, which Daisy May Erlewine was attending. They found they had similar tastes, among them folk, blues and rock. Seth Bernard and May Erlewine soon began collaborating professionally and eventually personally as well. He’d recorded his first album in 2001, and she followed suit later in 2003. Both were on Earthwork Music, a label affiliated with his family’s collective farm. They performed together throughout the state and across the Midwest, and the duo released their first recording together in 2006.

In addition to their music, Seth Bernard and May Erlewine have been a part of the musical and environmental activist community throughout the Midwest. They have taken their message across the country and beyond the U.S. border, participating in educational workshops with native musicians in Mexico in 2008. In addition to their duo performances, they also perform solo with various bands such as the Cadillac Symphony Orchestra. Their label, Earthwork Music, is also home to artists such as Lindsay Lou and the Flatbellies, the True Falsettos, and most famously, The Voice finalist Joshua Davis and his longtime band, Steppin’ In It. They’ve performed and recorded with Davis, and their connection to the NBC music show also includes winner Sawyer Fredericks, who sang May’s song “Shine On.” They also frequently appear on Garriso Keillor’s A Prairie Home Companion.

“For a guy who was making his first album, Seth Bernard doesn’t sound the least bit tentative on Hello Fellow Travelers. This is an ambitious and eclectic set of folk-rock that’s by turns jazzy, funky, hard-grooving, and down-home.” – The All Music Guide

Purchase tickets for the Seth Bernard and May Erlewine children’s show at MyNorthTickets.com. Tickets are $5.

Purchase tickets for the Seth Bernard and May Erlewine feature show at MyNorthTickets.com. Tickets are $15 for adults and $13 for students ages 13 to 18. Children under 12 are free.