In recent months Earthwork musician and Traverse City resident Joshua Davis has been competing on NBC’s The Voice. He’s not only representing Michigan music, he’s also helping put Michigan music on the map. During the Live May 4 show of The Voice, contestant Sawyer Fredericks sang “Shine On” a song that was written by Earthwork musician May Erlewine. The next day Rolling Stone Country published an article about her song. Sawyer’s cover of her song was one of the two tracks that had made it into the Top 10 on the iTunes chart on Tuesday morning. According to the Rolling Stone article, “Sawyer Fredericks’ earnest ode, “Shine On,” had viewers Googling the unfamiliar tune, which was penned by Americana artist May Erlewine.”

In light of her song receiving national exposure we are re-featuring a profile of Erlewine and her music and life partner, Seth Bernard, that first appeared in the December 2007 issue of Traverse, Northern Michigan’s Magazine. Since the following article’s print publication, Erlewine has logged thousands of miles and hundreds of concert appearances. In 2014 she and Seth had a baby girl named Iris Betsy Bernard. Read on for a behind the scenes look at this folk singing duo.

It’s early August, and folk singers Seth Bernard and Daisy May Erlewine are returning to their home on Earthwork Farm northeast of Lake City in the Missaukee County countryside. The temperature hovers in the mid-80’s as they pull up in their ’94 Toyota Corolla wagon. Dusty, no hubcaps, with a bungee cord holding down the hood, the car looks like it has just crossed the Australian Outback. Sound equipment, several guitars and other instruments pack the tight space. The two minstrels have just enough energy remaining to pull out the tweed and black hard-shell cases that hold their acoustic instruments, which are too precious to suffer in the hot car. But for now the rest of the stuff stays.

Seth, 27, is bearded, playful, a fan of Dr. Seuss and Shel Silverstein. May, as family and friends call her (Daisy is a stage name addendum), is 25, with a bright smile and sparkly eyes. They both glow with good health, despite spending many long hours on the road. 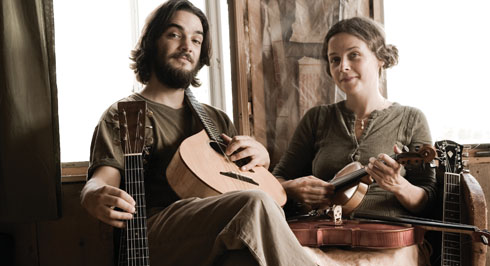 Recently, that road has taken Seth and May to The Fitzgerald Theater in St. Paul, Minnesota, where in April they were on Garrison Keillor’s radio pre-eminent folk venue, The Ark; and dozens of music festivals statewide. To see Seth and May perform live is to understand why this duo is so busy. May is a songbird reminiscent of Emmylou Harris and Patsy Cline; Seth has a warm, genuine, soft-spoken delivery. They harmonize beautifully, believing music can bring people together and proving so at every performance by connecting with the audience through their sweet songs about love and the land.

Settling in from their road trip, Seth and May put down their instruments, sort through a week’s worth of mail and set to making dinner while reflecting on the powerful relationship between music and community.

“Music in my life has always been something that brings people together,” May says, chopping carrots and shredding cabbage to make nori rolls. “It doesn’t matter if people have boundaries or different beliefs, they can all sit and enjoy the music and somehow, having this experience, they can understand each other in a different way.”

Seth serves up raspberry-nettle iced tea, clearing space amid the music books and CDs on the round oak table. He hums and sings as he moves around the house, but becomes serious when he talks of his responsibility as a musician and his part in keeping folk music alive.

“Everybody has to do something with their life, their time and the gifts that are given them,” Seth says. “May and I grew up with music around us, and we had teachers that took us by the hand and heroes that got inside of us. I have always felt drawn to people who were giving you music, melody, creativity and humor.”

Seth and May’s musical roots were very much shaped by their upbringings. May’s father, Michael Erlewine, is a musician and co-creator of the extensive online music metadata database, All Music Guide. In the 60’s he hitchhiked with Bob Dylan and played in a band with Iggy Pop; he met his wife, Margaret, while singing and playing piano in Ann Arbor. He advertised his shows with a block-print poster featuring a white heart in a red circle – an image that May gave new life when, in 2003, she used the symbol as cover art for her album Heart Song.

A crucial moment came early for May, when, as a young girl in her hometown of Big Rapids, her parents let her choose to be home schooled. It was a decision that shaped her life, allowing her a freedom that helped her talents shine. When May was just 11 years old, she started writing songs. At 16, she picked up her guitar and began traveling with friends, learning how to hop trains on the West Coast. She eventually settled in Philadelphia for a few years, where she made a living playing and singing Patsy Cline, Hank Williams and Indigo Girls songs in the subway every morning.

While May was riding rails and busking in subway stations, Seth was on his own musical path. Earthwork Farm, where he and May now live, was purchased by his parents in the late 70’s and provided a sprawling rural backdrop for Seth’s childhood. Seth attended Lake City public schools and spent a post-graduate year at Interlochen Center for the Arts where he took classes in art and acting, formed a couple of bands and staged variety shows. Traverse City filmmaker Rich Brauer saw Seth in a production of You’re a Good Man Charlie Brown, and hired him to act in his film The Lost Treasure of Sawtooth Island, starring Ernest Borgnine. Seth says being in the film was a pivotal experience, that it made “the big world smaller and small world bigger.” He used his earnings to produce his first album, Hello Fellow Travelers, and got to spend time in New York City and New Orleans. He also went on the road with the National Theater for Children, a touring educational troupe that had Seth performing as Louie the Lightning Bug in schools across Texas, Oklahoma and Arkansas – and giving him experiences that would eventually become fodder for his songs.

After dinner, Seth puts a ladder against their little house, which Seth’s family built years ago from trees harvested and milled on the Earthwork Farm, and leads the way to the roof to watch the sunset. Crickets are singing and the air smells of well-baked summer grass and pine trees. Balancing on the peak of the gently sloping roof, May recalls when her path finally converged with Seth’s: when she introduced herself after seeing him play at the Ann Arbor Folk Festival in 2003.

“That was a big catalyst for me in making music a career,” May says. “I could just tell that he had so much faith in it, and it was just going to work for him, and I realized I could do that too. So, I really started to try hard, and we got to know each other after that, slowly but surely.”

Two years after that meeting, Seth and May decided to record an album together. They enlisted the talents of several musician friends – upright bass player Dominic Suchyta from the Lansing-based band Steppin’ In It, cellist Andrea Moreno-Beals, and Drew Howard on pedal steel guitar – and dubbed the band The Copper Country Quintet. The group rented the historic Calumet Theatre, an elegant century-old playhouse on the U.P.’s Keweenaw Peninsula, and trucked up there from downstate to record a catalog of 10 original songs, playing from noon to midnight for three days in the empty theater.

Since meeting, Seth and May are often seen as a duo, but they continue to grow as solo musicians as well. A new Seth Bernard album, which has “been in the pressure cooker for a long time,” is slated for release in early 2008; an additional Seth-spearheaded album, titled Airborne or Aquatic?, will be released this month. And 2007 brought Daisy May’s fourth solo album, Mother Moon, which has richer musical textures than her previous records and represents another step forward for her as a singer and songwriter.

“Ever since I was little, I have loved to create landscapes of music,” May says. “Now I have amazing musicians and friends to play these parts. [This album] was the first time I trusted all those little pieces fully and saw them to the end.”

When they are not busy writing or recording songs, Seth and May keep their schedules filled with gigs, festivals and community-oriented gatherings that underscore the duo’s values. In July they host a family weekend at Earthwork Farm, where kids and parents do art projects, write songs and perform in a talent show held in a barn with hay bales for bleachers and Seth as emcee. Under the umbrella group Earthwork Music – the couple’s music production company – Seth and May also have helped organize Water Festivals across Michigan featuring musicians and speakers to promote water preservation and education. Their approach to this advocacy is as gentle as their sound.

“My folks always told me, it is more powerful to be for a thing than against a thing,” Seth says. “You can stand up there and say ‘Boo for Bush’ and some people will boo, but if you say ‘Let’s hear it for the Great Lakes!’ everyone will cheer.”

At a concert during the 2006 Great Lakes Bioneers Conference—an annual Traverse City-based environmental symposium—Seth interjected between songs, “If some of you young people are thinking of moving to Oregon, please don’t. We need you here!” It was a message that had personal relevance for the duo: when they were first playing together, Seth and May themselves gave some thought to moving to Portland, (Seth’s mother and sisters live there and sing together). But Seth and May decided to remain in the Midwest, and they soon became an integral part of Michigan’s musical landscape – not to mention two of the busiest musicians in the state.

“There was this feeling we both had about all our friends and music here, that it was gaining momentum and galvanizing,” Seth says, now a silhouetted shape on the roof. “Every community has a certain need, and part of our thing is focusing on Michigan.”

Later in August, Seth and May play a noontime concert in Traverse City at the grand opening celebration for Oryana Food Cooperative’s expansion. A few hundred people show up, overflowing the tent set up for the event.

Seth plays a rhythm on guitar that gets everyone lightly rocking, and May accentuates the beat with a staccato part on violin. The song is “Am I In Here?,” which features the refrain “I owe it to you, all of it.” It is a love song, and Seth is singing it to his partner as well as to the audience. Young kids sit on their parents’ laps, and pre-teens disarmed by the music lean against their parents, too. Couples move closer to each other as the duo plays. It is another day on the road, but Seth and May have a way of making everyone feel at home when they sing.