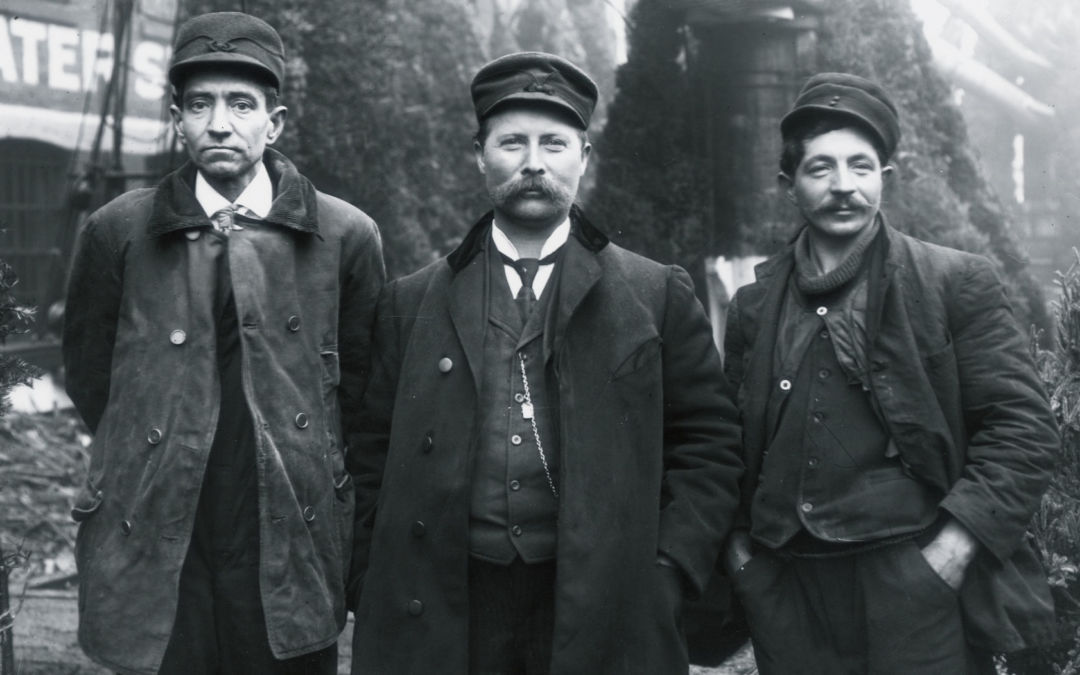 With a load of fragrant evergreens from Michigan’s Northwoods, a legendary schooner carried the spirit of Christmas—and an example of unusual courage—to turn-of-the-century Chicago. Then one stormy year the Christmas tree ship never came.

This Traverse classic was featured in December 1999. Subscribe to life Up North.

Captain Herman Schuenemann was not as jovial as usual as he lowered the evergreens into the hold of the grand but aging schooner Rouse Simmons in a small harbor in Michigan’s Upper Peninsula.

It was late November of 1912, and the legendary “tree captain” and his crew of 16 had just five days to run the length of Lake Michigan and still reach Chicago by Thanksgiving. There, a loyal crowd of families and merchants would be waiting for his arrival and the festive cargo he’d been hauling for 25 years. He had not yet disappointed them.

His nickname was “Santa” among the local children, but Schuenemann was no doubt thinking about money as well as holiday spirit. The tree captains of the Great Lakes made a living by sailing inexpensive old boats—boats others had deemed un-seaworthy—well into the stormy winter season on the lake. With a high demand for the trees, Herman could make three times as much as he’d invest in the harvesting, crew salaries and charter fees and even double his annual income between Christmas and New Years. And facing a lawsuit over an unpaid debt this year, he needed to squeeze every penny he could out of this voyage.

But the fate of his brother, August, couldn’t have been far from his mind when Herman made a fateful decision that day and yelled to his crew, “keep ‘em coming,” until the schooner was packed with its biggest—and heaviest—load ever: some 10,000 trees.

August Schuenemann had miscalculated the risks back in 1898 when he sailed a rickety $250 boat with a load of 3,500 trees and in a gale was thrown against the shore and killed. That was the only year Herman had stayed behind, and only because his twin girls had just been born.

But Herman took yet another risk in 1912 when he opted not to re-caulk his aging vessel. He even sailed against the advice of a loyal crew member, who said he’d had a premonition of trouble. No one knows just what he was weighing when, as lore has it, he simply replied: “There are children in Chicago waiting for Christmas trees.”

“This is the tale of the Christmas Ship that sailed o’er the sullen lake. And of sixteen souls that made the trip and of death in the foaming wake.”

The ship left port on a gray but calm day and wasn’t spotted until the next afternoon when the lake got suddenly rough. At about 3 p.m., the Rouse Simmons was spotted by a ferry boat about five miles from Two Rivers, Wisconsin, with its sails tattered, its hull coated in ice and its distress signals flying.

At the same time, on Chicago’s Clark Street Bridge, the atmosphere was festive as children clapped their mittens in excitement. Families pushed past peg-legged vendors and elegant carriage drivers in fur-trimmed hats to get to the edge of the water; each wanted the first glimpse of the ruddy-faced man who would arrive any minute bearing “gifts from the North.”

Even the hint of snow couldn’t dampen the holiday spirit as the crowd scanned the harbor for a single, snow-covered pine tree entwined atop Schuenemann’s 80-foot mast. Every year, with the tree flying like a Christmas flag, the captain would sail past the modern side-wheel steamers to the dock, where the waiting crowds could take their pick from the overflowing stacks of fragrant balsams.

Schuenemann’s arrival was always the best assignment of the year for cub reporter Vincent Starrett of the Chicago Daily News. He especially looked forward to the start of the annual assignment—a cup of Christmas cheer in the captain’s cabin, where, as he would later write in an article about the custom, the two old friends would “discuss the perils of Lake Michigan as if it were the Atlantic Ocean.”

Readers were also eager to hear more about the Christmas trees, which had firmly entered the ranks of tradition in Chicago and across America by that time. Brought to America by German immigrants, the custom had finally overcome a heavy resistance by the Puritans, who had called the trees “a plain case of idolatry.” But the tree business was booming in 1912 as the cities of New York and Boston prepared to dedicate their first municipal Christmas trees in Times Square and Boston Commons.

When the captain reached Chicago in the early 1900s, he could expect a brisk trade that would go on all day and sometimes into the night, Starrett later would write.

“Prices were not excessive for the day,” he recalled. “For 75 cents, one could get a full-sized tree; a dollar would give you the choice of the best. They all went quickly, for the Christmas tree ship was a Chicago tradition.”

But as the day of expected arrival wore on, Starrett and his colleagues were starting to worry as they waited. Night fell and turned into another day, then another, and rumors began to fly about the ship’s fate. Starrett would visit the docks for another two weeks before he got enough information to write the story for the Daily News, which he began: This is the tale of the Christmas Ship that sailed o’er the sullen lake. And of sixteen souls that made the trip and of death in the foaming wake.

Boisterous Chicago newsboys swarmed the street shouting the headlines of the day:  “Rats Fled Doomed Christmas Ship,” and the inaccurate, “Christmas Tree Schooner Sighted. Santa Claus Ship May Be Safe!” Rumors dominated the front pages until mid-December when Christmas trees started to wash ashore and become entangled in fishermen’s nets. On December 13, a bottle and a note torn from the ship’s log washed up on shore in Sheboygan, Wisconsin, and solved the mystery. It read:

Friday – Everybody goodbye. I guess we are all through. Sea washed over our deck on Thursday. During the night the small boat was washed over. Leaking bad. Ingvald and Steve fell overboard Thursday. God help us. —Herman Schuenemann

The message wasn’t the end of the story, though, and it was the response of the captain’s wife, Barbara, that turned history into legend.

When the snow fell in Chicago that next November, Barbara Schuenemann and her daughters were standing proudly aboard a newly chartered Christmas ship as it sailed into port with the snow-coated pine tree flying in the mast. She carried on the tradition by both ship and rail until she died 22 years later.

Over the years in the same Chicago harbor, wily entrepreneurs—perhaps not at all unlike the Schuenemann brothers—have tried to bring back the spirit of the ship and capitalize on the sentiment it inspired. But the newer “tree” ships docked at Navy Pier haven’t yet found the secret of the captain’s three-masted schooner. And no modern-day Santa can yet compete with the man with twinkling blue eyes who’d sell trees under a make-shift string of white lights and a sign proclaiming: “Christmas Tree Ship. My Prices are the Lowest.” 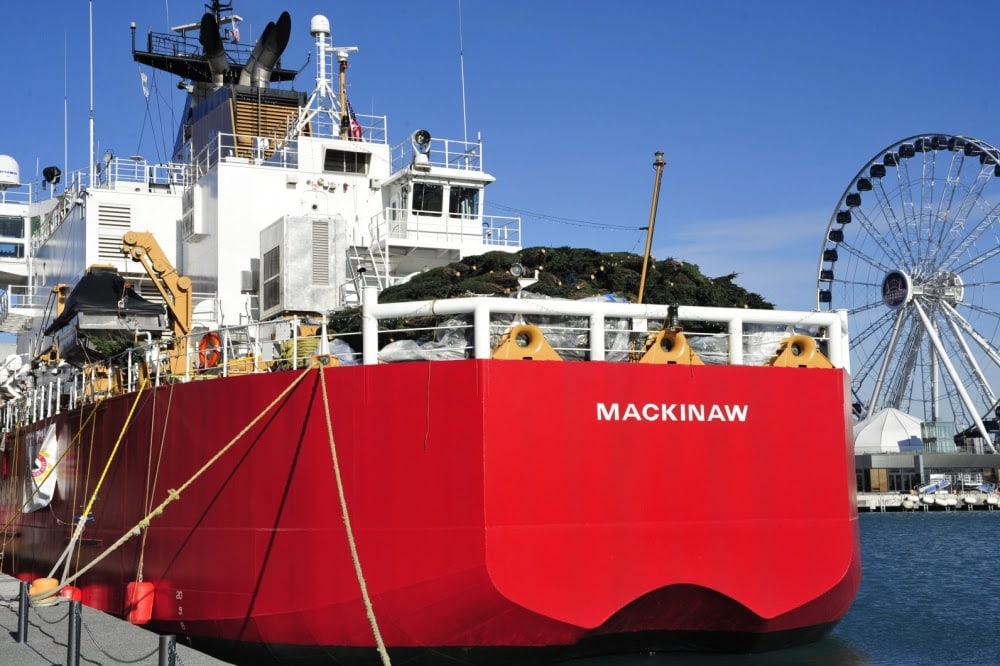 Chicago’s boating community reenactment of the olden days of the Rouse Simmons landing in Chicago is now portrayed by the U.S. Coast Guard Cutter Mackinaw. The trees are off-loaded from the Mackinaw by local youth volunteers, including Sea Cadets, Venture Crews, Sea Scouts and Young Marines and loaded onto trucks for distribution to more than a thousand deserving families throughout Chicago by Ada S. McKinley Community Services. The gift of Christmas trees to deserving families is made possible by the generous financial support of our sponsors, donors and contributors.

In 2017, more than 1,200 Christmas trees were delivered from Northern Michigan to families in Chicago. The 2018 Christmas Tree Ship will be Saturday, December 1, 2018.