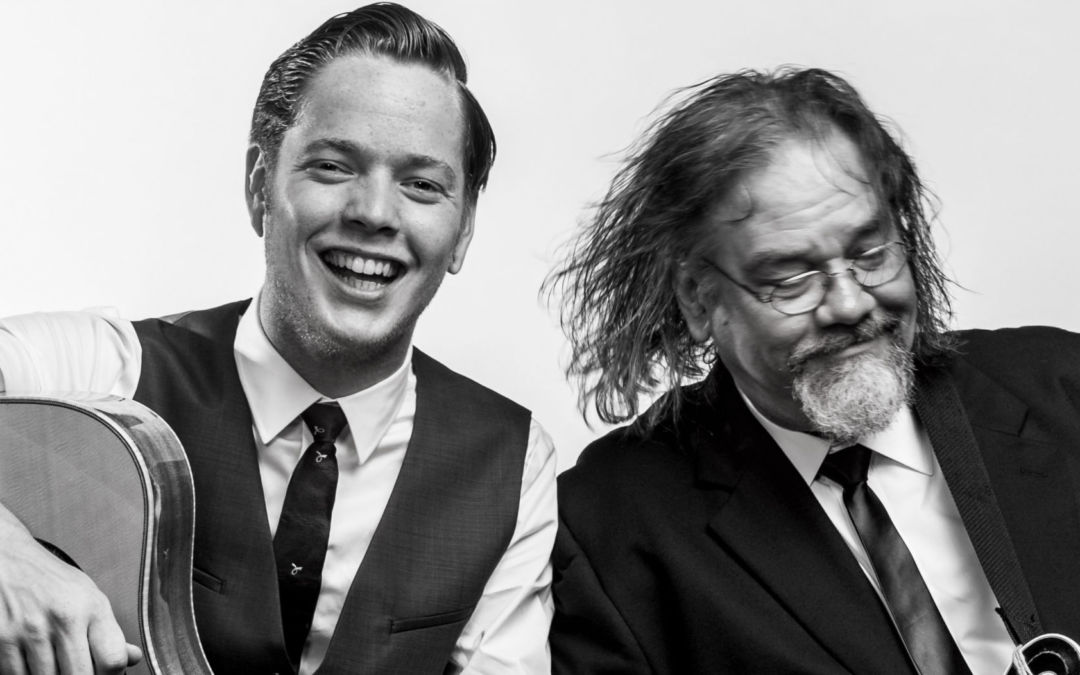 There’s a dancing-room-only crowd toward the front of Little Bohemia on a Thursday night. Billy Strings and Don Julin have a firm guitar-and mandolin-hold on the lively scene, though they’re nearly invisible to anyone more than a few booths from where they play.

Julin picks a solo lively enough for a movie chase scene, while Strings—whose real name is William Apostol—rocks a bass line on his Roy Noble custom guitar. They trade off, and Billy takes the audience for a ride with his own lightning licks while Julin pick-strums backup.

On vocals, they harmonize in and out of Brother Where Art Thou–type numbers, what Julin calls “hippy bluegrass,” by Jerry Garcia. Then they move to Billy’s own moaning-with-regret ode to an old friend put away for meth possession titled “Dust in a Baggie.”

They both wear ties tonight. Don looks stately rocking the bluegrass and gospel while sporting a goatee and black suit jacket, his longish hair emerging from a grey fedora. Billy wears an orange shirt that gets dark with sweat as the second set heats up. Billy sings “I ain’t gonna work today” in an old-timey song called “Wedding Day.” His voice reveals a richness and life wisdom you’d expect from a much older bluegrasser. Billy’s and Don’s voices and their instinctive harmonies often get ignored because their picking leaves people in a trance.
Tonight, Little Bohemia’s small-ish dance floor is jam-packed with women and couples. They may be groovin’ to bluegrass, but there are no cloggers here tonight. These dancers are shaking it down à la Bob Seger. The brown American Tourister suitcase that the duo keeps open on the edge of the stage overflows with bills. Some people grab a copy of their CD, Rock of Ages, while others tip generously. The tip suitcase accounts for a sizeable portion of their income.

Gratuities alone allowed them to take a working summer tour of the West Coast early on. That tour orbited around Don’s appearance at an annual symposium in California at which he shares a headline with bluegrass mandolin superstar David Grisman and others.

The energized night at Little Bohemia offers clear evidence of how these guys have grabbed the thriving Traverse City music scene by the fretted neck. When they happen to be in town, that is—which is less and less as their tour schedule expands and their East and West Coast fan base grows. Billy’s Facebook feed tells of being houseguest of a bluegrass legend and jamming with actor John C. Reilly at star chef Mario Batali’s Northport home. On such occasions, Julin is happy to let young Billy take the limelight. Yet it’s Julin’s business savvy, solid international following and ability to take the mandolin in new directions that have made much of the duo’s success possible.

Julin first picked up a mandolin in 1979, when he was 19. He was having a beer with a friend from a construction job who was playing guitar. The friend handed him a mandolin and showed him a few chords and he was hooked.

Julin has made his living exclusively off music since the early ‘80s.

Yet Julin had never played bluegrass professionally before connecting with young Mr. Strings in 2012, despite spending much of the past three decades building an international following as a teacher, performer, and ambassador of the mandolin.

In most musical genres, the mandolin is something of a fringe instrument, a low-profile accompaniment, but in bluegrass, the instrument has far more sex appeal and cachet. The man who invented bluegrass, Bill Monroe, was a mandolin picker, after all.

But Julin has always stretched the possibilities of those eight little strings. He’s played Zappa, Miles and Coltrane. He’s played blues, classical and stuff by popular singer-songwriters and just about every other type of music in which the mandolin is a rarity. Kind of like what Béla Fleck has done for the banjo on a much larger scale. Julin has also written one of the most popular mandolin instruction books on the market, Mandolin for Dummies, and followed up in June with Mandolin Exercises for Dummies.

Julin’s recorded riffs and instrumental compositions are also heard now and then as background and on scene transitions on reality show Jersey Shore, various Discovery Channel programs and numerous other cable shows, as well as frequent snippets on NPR news. He usually doesn’t hear them and only finds out about it when the checks show up.

But Julin is best known as a teacher, and he has presented mandolin workshops and master classes around the world. “I go to New York or Italy and people know who I am,” he says. “Here, they think, He’s the guy who plays cocktail parties.”

At age 21, Strings has fewer expenses and is making his living and then some solely by picking. He doesn’t see himself going the teaching route, either. “I don’t even know what I do, so I can’t teach it,” he says.

Strings has a sort of young Matthew Broderick innocence about him that shines through despite a prodigious amount of ink on his chest and arms and an earlobe torn by a gauge that was yanked out of his ear at a heavy metal concert.

He had come to Traverse City from the Ionia area to get away from some of the drugs that were plaguing his friends. He’d been in a heavy metal group and brings a hard-rocking sensibility to the acoustic music he’s focusing on now. Bluegrass and old-time music is what he grew up with, and it makes him feel connected to the other musicians and the audience in a way that no other music can. That may be because he’s traded licks with his father, also an accomplished picker, for as long as he can remember.

William Apostol, who was named Billy Strings by an aunt when he was a child and who got his first real guitar at age 4, wasn’t sure he’d be able to make it on just his picking when he moved here from Ionia a couple of years ago. He first became a regular at local open mic nights and was often the biggest hit there. Still, he hung onto the day job he’d had since he got here, lobby attendant at Grand Traverse Resort.

Early in 2012, Julin heard about this new guitar slinger in town and went to Brew, the café/pub, to hear him. He invited Apostol to his home to jam and then asked him to join him on a paying gig. “I saw something in his playing that intrigued me,” Julin says. “I figured, I bet we speak the same language.” Turns out they do.

And there are aspects of the music business that Julin is teaching his less- experienced partner, Strings says. “Before I hooked up with Don, I didn’t know how to get gigs,” he says. “I was just a kid.”

He and Julin don’t follow all the rules of the carefully scripted blue grass genre. For one thing, they like to mix it up. They’re not likely to play the same thing the same way twice. They’ve been known to extend solos for as long as the energy’s there between them and the audience, a more jazz-like tendency.

Strings and Julin don’t hang out together when they’re not playing, though they do go on frequent business trips together, of course. They load their favorite axes, sound system and luggage into Julin’s powder-blue Kia Sedona mini van and go to California or St. Louis or the East Coast.

They’re spreading their two CDs around too: Their latest, Fiddle Tune X, and their first, Rock of Ages. They’re on the third printing of 1,000 copies each of the disc, which they recorded in Julin’s basement studio. Despite the religious title and cover art by Mike Emmett, most of the songs are secular. Still, the gospel numbers swing just as much as the others, to which the dancers at Little Bohemia will attest.

Their busy schedule has been great for them, though gone are the days when Billy might show up at an open mic or join a friend’s gig to jam. Fortunately for their growing number of fans, they both say they want to continue taking this pairing as far as it can go.

“This has got a really special energy,” Julin says. “People love this.”

“This is all I’ve ever really wanted to do,” Strings says.