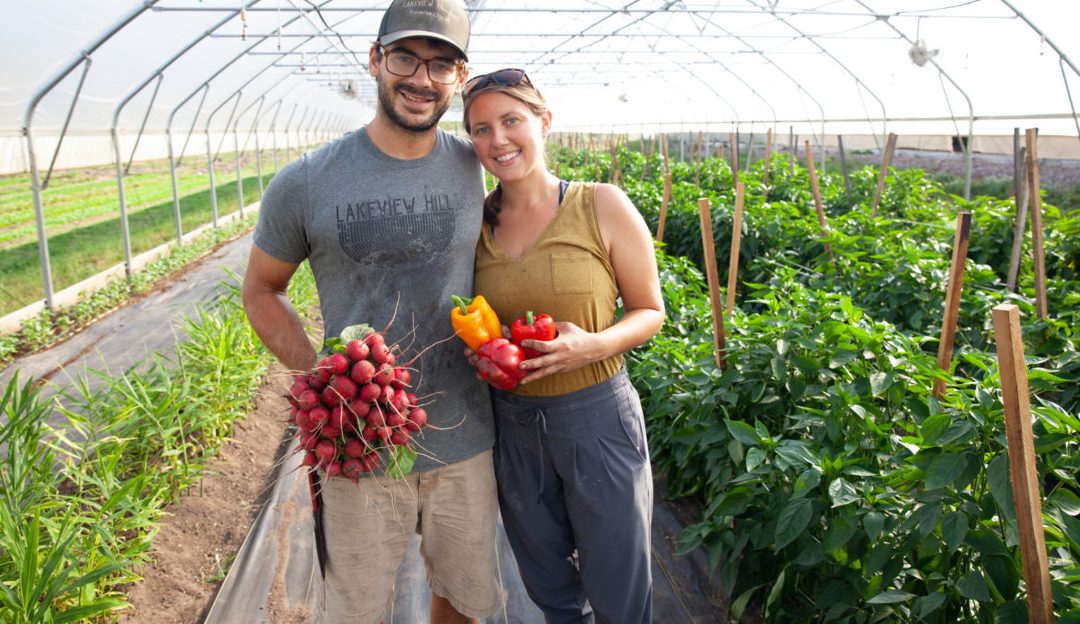 It takes a community to grow and deliver local produce to Northern Michigan’s residents facing food insecurity. Lucky for us all, Northern Michigan is that community, with farmers, food pantries and nonprofits coming together to create the Farm2Neighbor program.

Kris Thomas didn’t know much about Northern Michigan’s food insecurity when she embarked on a study in 2014. The retired nuclear engineer, Benzie County Rotarian and chairwoman of the Paul Oliver Memorial Hospital board spent six months studying food security issues within a five-county area (Antrim, Benzie, Grand Traverse, Kalkaska and Leelanau), conducting several hundred interviews with people who utilize local pantries. What she heard, time and again, were heartbreaking stories from Northern Michigan families in need of fresh food.

Thomas looked around at an agricultural region brimming with local produce and a community of local farmers committed to staying in farming. “I wanted to be able to eventually find a way in which we could actually purchase food from farmers to support them and to support community food security,” Thomas says.

The idea was to raise money to buy produce from local farmers, helping them to stay in farming; build a coalition of partners to distribute the food, allowing them to add local fresh products at their access sites; and make it possible for food-insecure families to share in the region’s bountiful harvest. 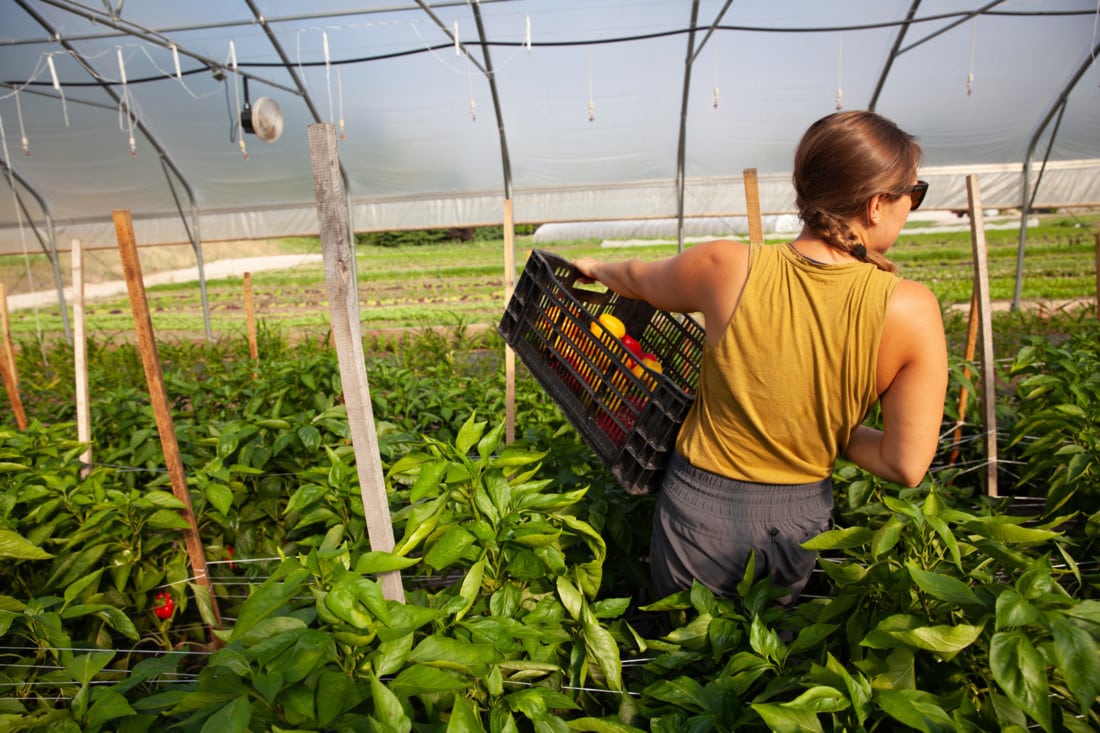 In 2018, working with the Northwest Food Coalition, the Farm2Neighbor pilot program was launched, thanks to donations from Rotary Clubs, Cherry Republic, the Orton Family Foundation and various individual donors. The Northwest Food Coalition, founded in 1994, was the ideal partner, offering a roughly 70-member alliance of food pantries, emergency meal sites and baby pantries in a six-county area of Northwest Michigan.

Talk to any of the many folks involved with the Northwest Food Coalition and Farm2Neighbor, and one thing is clear—the work they’re doing would be impossible without the collaboration and relationships among members of the Coalition, Goodwill Food Rescue, Groundwork Center for Resilient Communities, farmers, pantries, meal sites and the many volunteers associated with each organization. 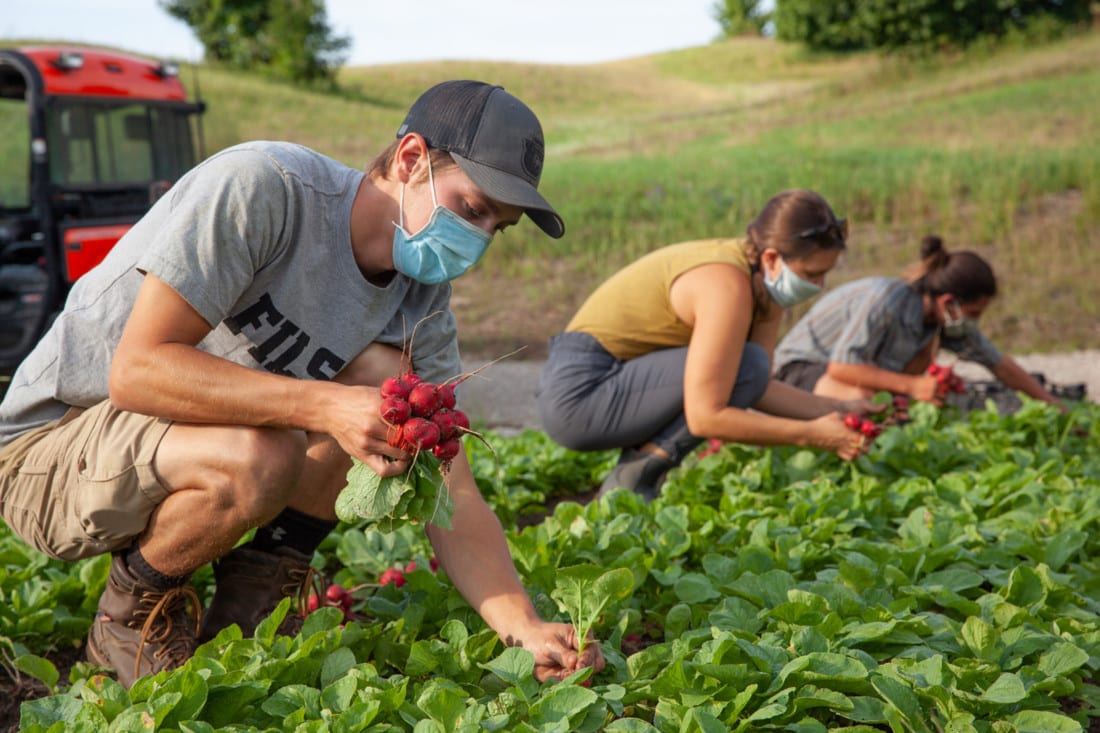 It Starts in the Fields

It’s a sunny August morning, and farmers John Dindia and Bailey Samp, alongside employees Josh Molligan and Nick Truba, are crouched down, tucked among the bright, leafy rows of summer crops at Lakeview Hill Farm in Traverse City. Today, they are working to unearth ruby red radishes from the soil. They pluck and collect the fresh-from-the-earth veggies, carefully rubber band bundles of the precious cargo and load them into bins before moving on to harvesting multicolored peppers and microgreens.

This organic, farm-fresh produce will make its way to a multitude of outlets: Lakeview Hill’s farm store, farmers markets, the CSA they participate in and local retailers like Oryana and Olsen’s. But since 2018, some of Lakeview Hill’s produce also goes to feeding the food insecure throughout the North through the Farm2Neighbor program.

John and Bailey grow 20 to 30 different crops at Lakeview Hill, but derive about 75–80 percent of their income from four: tomatoes, cucumbers, baby leaf greens and microgreens and shoots.

This year—thanks to successful fundraising for the Coalition by local nonprofit Groundwork Center for Resilient Communities—the couple was able to sell twice the amount to the Coalition through Farm2Neighbor: 1,000 pounds of tomatoes and 800 pounds of cucumbers made their way to food pantries and meal sites in the region. 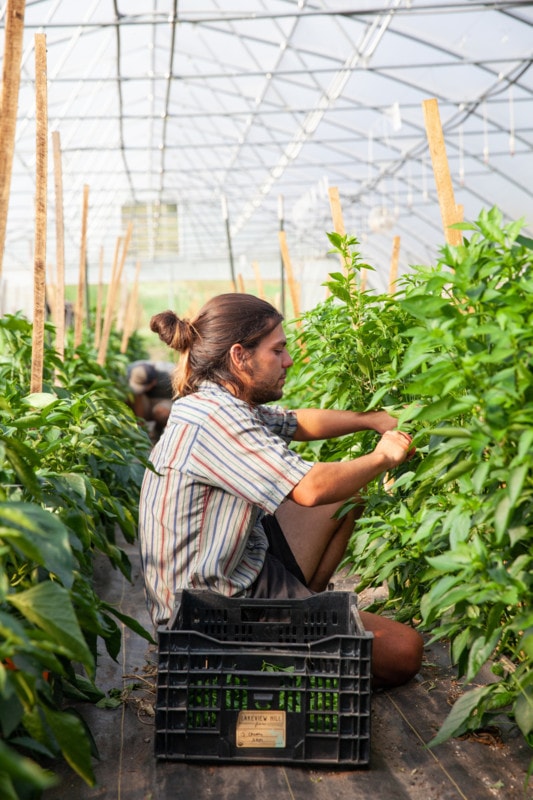 John says that opportunity can be crucial at times when their regular market stream can’t handle the amount of produce they have. This has been especially helpful during the pandemic—selling to restaurants accounted for about 30 percent of Lakeview Hill’s gross sales last year, and when COVID-19 hit, restaurant sales slid down to 15 percent of what they normally were. Thanks to extra funding, the Coalition was able to purchase some of that produce, allowing John and Bailey to recapture lost revenue.

“It’s been great, especially in the summer. It’s almost all perishable product, so we have a couple of days to get rid of this produce or it’s going in a compost pile,” John says. “So, it’s a win-win. It feels great to know that the food’s being consumed by people who need it.” 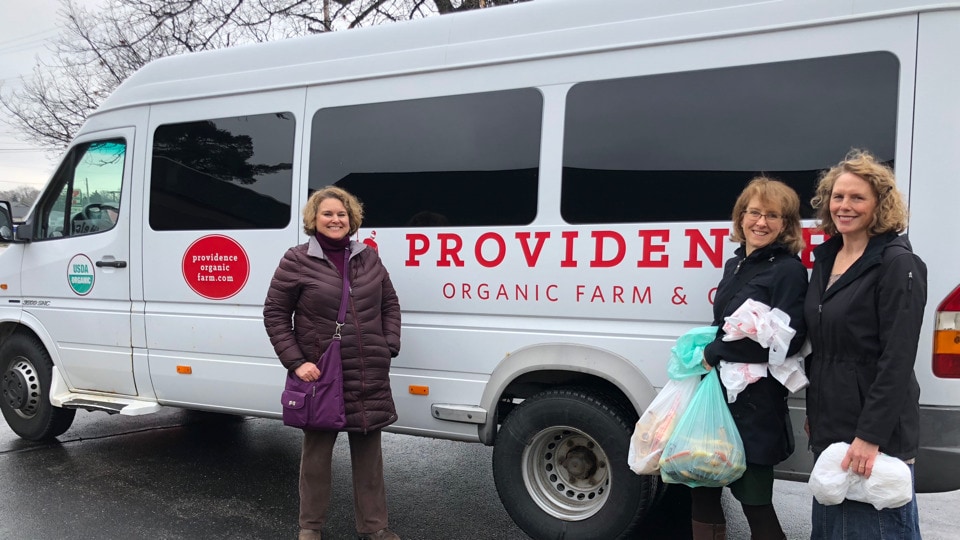 From Field to Table: No Easy Task

Meghan McDermott, director of programs at Groundwork Center for Resilient Communities, says when Thomas raised the initial $30,000 in 2018 for food purchases for the Coalition, Groundwork was thrilled and helped connect them to one of their longest-standing Farm to School partners, Providence Farm. “The first purchase of local, organic carrots, turnips and radishes for just 75 cents per pound was an incredible accomplishment,” McDermott recalls.

It was clear Thomas’ idea was a win/win, but it also came with logistical complexity. So, when Farm2Neighbor needed a staff person, Groundwork stepped in to hire a 3⁄4-time staffer to support the effort. Thomas says it was the addition of this purchasing coordinator—Food Equity Specialist Christina Barkel—that really allowed the program to take off. Barkel works with Taylor Moore, manager of Goodwill Food Rescue, to coordinate produce purchases from area farms. Moore then works on the logistics of picking up the food, prepping it and transporting it to pantries. “We have the trucks, storage, cooler space and the kitchen needed to take that food in and get it ready to go,” Moore says. 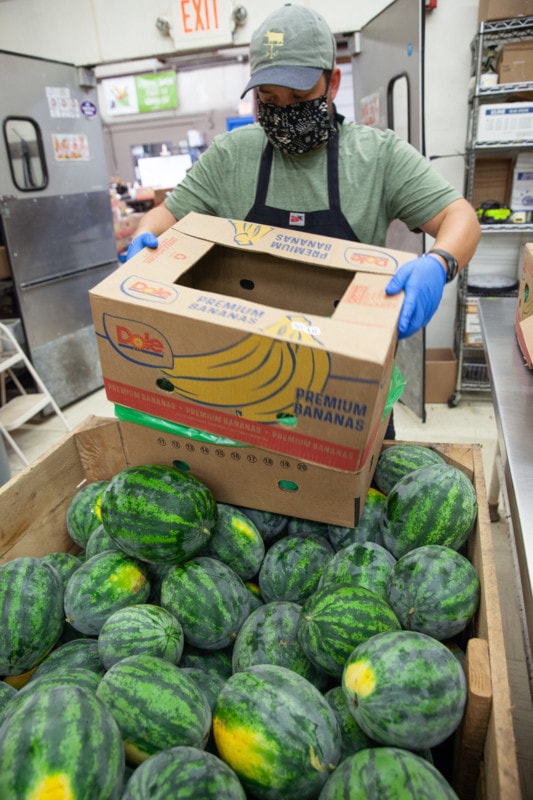 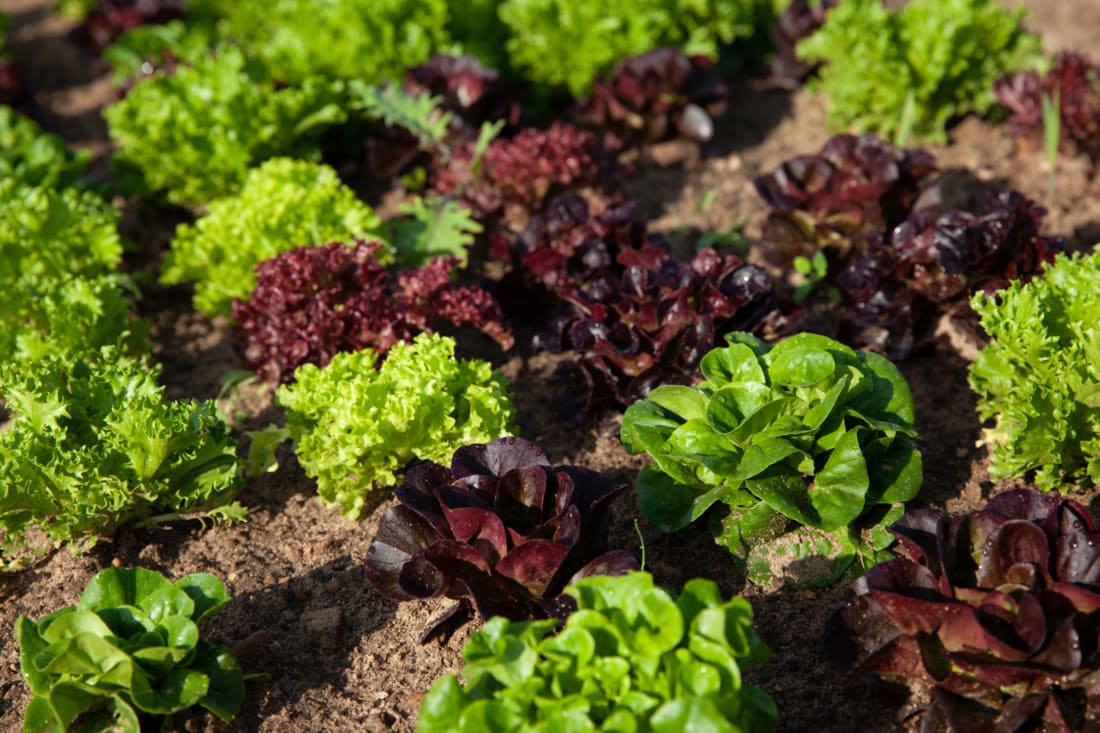 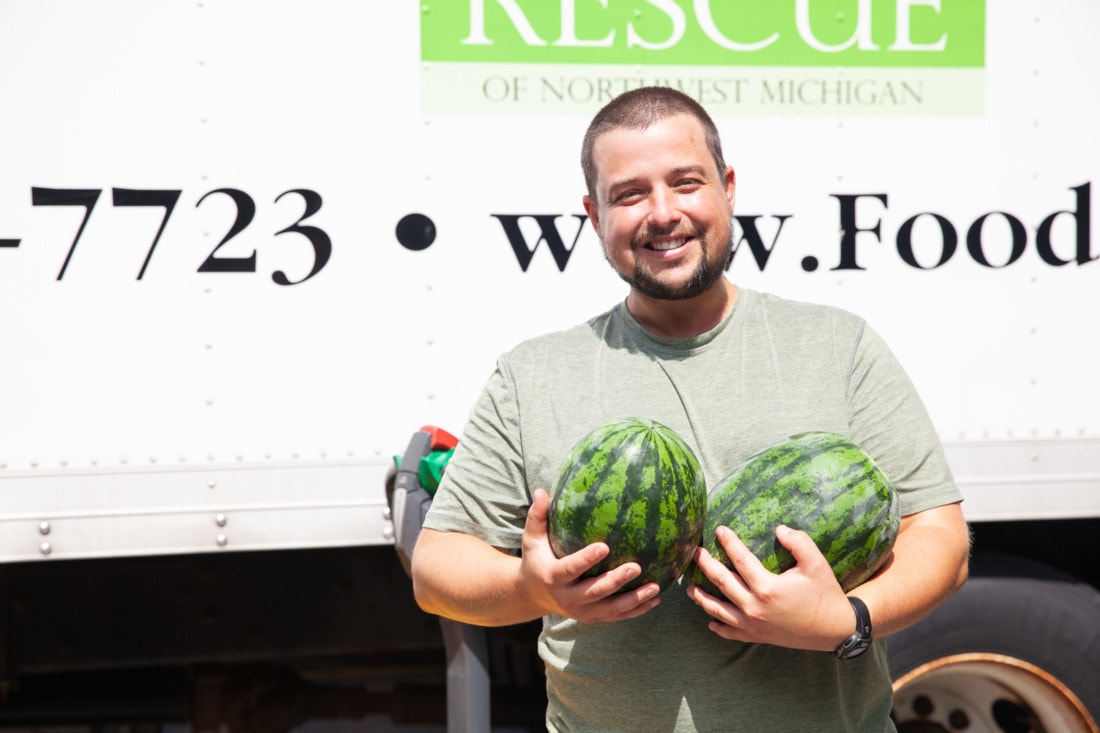 Goodwill Food Rescue has been picking up soon-to-expire food from grocery stores, farms and bakeries, and distributing it to pantries and meal sites throughout the five counties since October 2008. “But with the start of the Farm2Neighbor program, we’re doing even more—we’re distributing purchased local produce as well as purchased non-perishables that the Coalition is buying,” Moore says.

Moore’s team of volunteers at Goodwill Food Rescue can repackage up to 1,600 pounds of produce a day at their Traverse City facility. He says it’s encouraging to fulfill Goodwill’s mission while supporting local farmers in their farming endeavors.

“Supporting our farmers is important, especially up here, with such an incredible diversity and a lot of younger farmers. There’s so much farmland that’s being lost,” Moore says. “People coming to these pantries have a right to access healthy food.”

Mary Clulo, who serves on the Coalition’s operating committee with Thomas, says the pantries have received positive feedback from residents who visited the sites and, for the first time, were able to pick up freshly harvested produce.

“People appreciate getting fresh produce when it’s sometimes cost-prohibitive for them,” Clulo says. “They’re able to transform their expectations as we transform. There was a time when you went to the pantry and got shelf-stable items. But to get SSI [Supplemental Security Income] and then also walk away with tomatoes, asparagus, beautiful orange carrots and parsnips from such farms as Providence Farm, Buchan’s blueberries … To me, it’s an affirmation of how we value people and value their health, and the importance that they get quality food. We’re able to invest in higher nutritional quality items for them because it’s important to them, and thus, it’s important to us.” 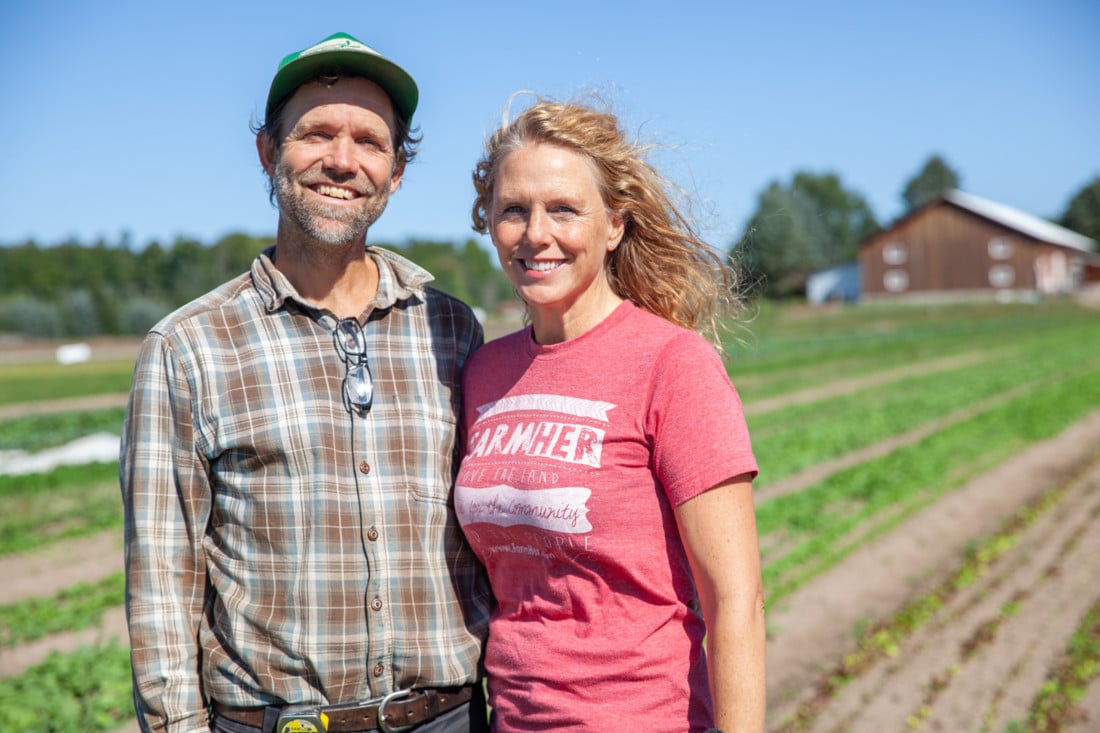 The Coalition in the Time of COVID-19

When COVID-19 hit, McDermott says Groundwork staff came together to think of how they could best serve the community during a time of crisis. They landed on the Local Food Relief Fund, and within eight days, they had raised more than $130,000 to purchase and distribute local produce. The funds were divided among Manna Food Project (based in Harbor Springs), the Northwest Food Coalition and Goodwill Food Rescue. To date, the fund has raised more than $187,000 from 600-plus individual donors, McDermott says.

That’s good news for Andrea and Ryan Romeyn, owners of Providence Organic Farm in Central Lake. The Romeyns have been involved with the Coalition and its programs from the start, committed to making sure community members have access to fresh, healthy food. This year alone, they’ve contributed 1,000 pounds of tomatoes, 800 pounds of carrots, as well as zucchini, cabbage and squash.

“We’ve been working with pantries for a very long time, ever since I’ve been farming up here,” Ryan says. This includes a close relationship with their local pantry, Good Samaritan, which comes out to their farm weekly to pick up produce (separate from Farm2Neighbor).

“But also, what Groundwork is doing and Northwest Food Coalition and Manna [Food Project], being able to buy from local farms, to get this food—local, organic—into populations that might not have the income to spend extra on organic, to me, is very meaningful,” Ryan says. “It’s filling that niche, and the burden isn’t all on the farmer to span that gap. They’re sharing the burden, and they’re covering that gap. I think it’s really good for our community.”

Ryan says he’s grateful for the people involved with the Coalition and for organizing Farm2Neighbor, adding that he was surprised and excited by the quantity of money raised in the spring. “I know it takes a lot of people, and a lot of coordination and administration. It takes a lot of fundraising, and a lot of generous people to give money to it.

“People want to share—sometimes we just need to have easier ways to do that,” he says. “I’m very grateful as a farmer because it’s also making it easier for me to get my food to the people in need, in a very efficient way. Hopefully, it will continue. I would love for this to be—for the rest of my farming career—to be a part of what we do.”