While Old Mission and Leelanau have become well-known for their vineyards and wineries, they’re not the only areas in Northern Michigan plying the trade. The Bay View Wine Trail may not be as prominent—yet—but it continues to grow each year.

It is home to nine wineries, with two more being added this summer, and extends from Ellsworth to Harbor Springs, with stops along the way in Alanson and Petoskey. Evocative names like Seasons of the North, Maple Moon Sugarbush and Winery and Crooked Vine bring to mind the beauty of the region as well as the magic and mystique of wine.

The one thing the wineries don’t have is the history of their southern brethren. “We’re a young wine trail,” notes Geoff Frey, owner of Crooked Vine Vineyard and Winery in Alanson.

Geoff, who worked for Gallo in the ’70s and spent time in the Napa and Sonoma regions while working in the tech field in San Francisco and San Jose, decided after a few years of retirement he needed something new to do. He heard about the cold-hardy grapes being developed at the University of Minnesota and decided to try his hand at it. He’s planted five of his 20 acres with grapes such as Frontenac, Marquette, and Frontenac Gris. 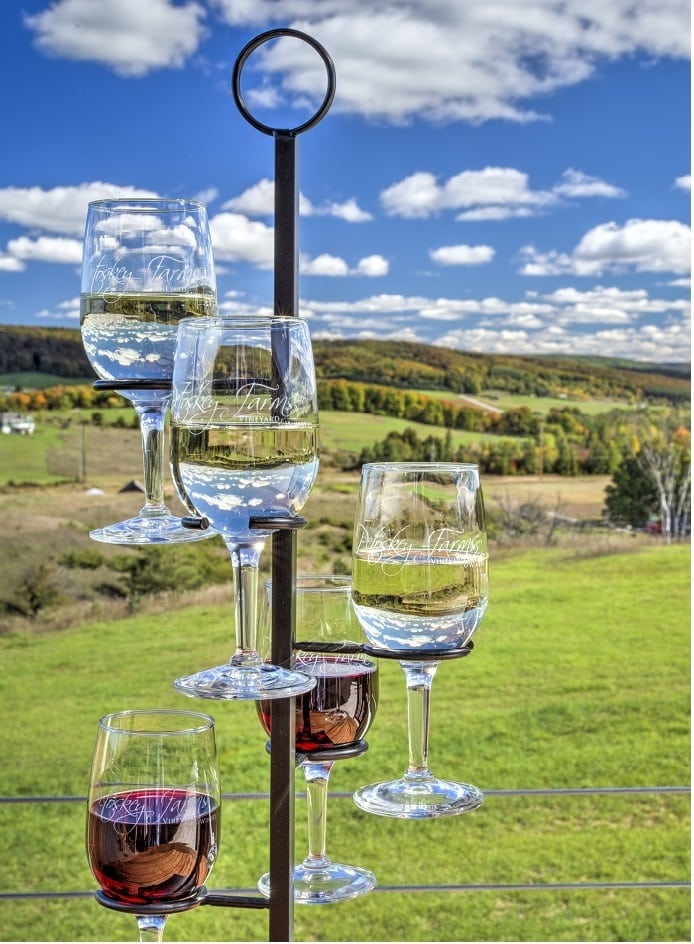 For example, Tracie and Andy Roush opened Petoskey Farms Vineyard and Winery just three years ago. Like many, they were seduced by the Northern Michigan lifestyle. “We were both in the corporate rat race,” Tracie says. “On our anniversary we’d go to wine country. It was relaxing and we dreamed of doing it ourselves.”

The dream became reality in 2012 when they sold their home in the Rochester area and moved north. They found a 22-acre parcel, and Andy continued to work at his corporate job from his home office while they planted grapes and learned the business. He eventually quit, devoting all his energy to the winery when it officially opened for business three years ago. 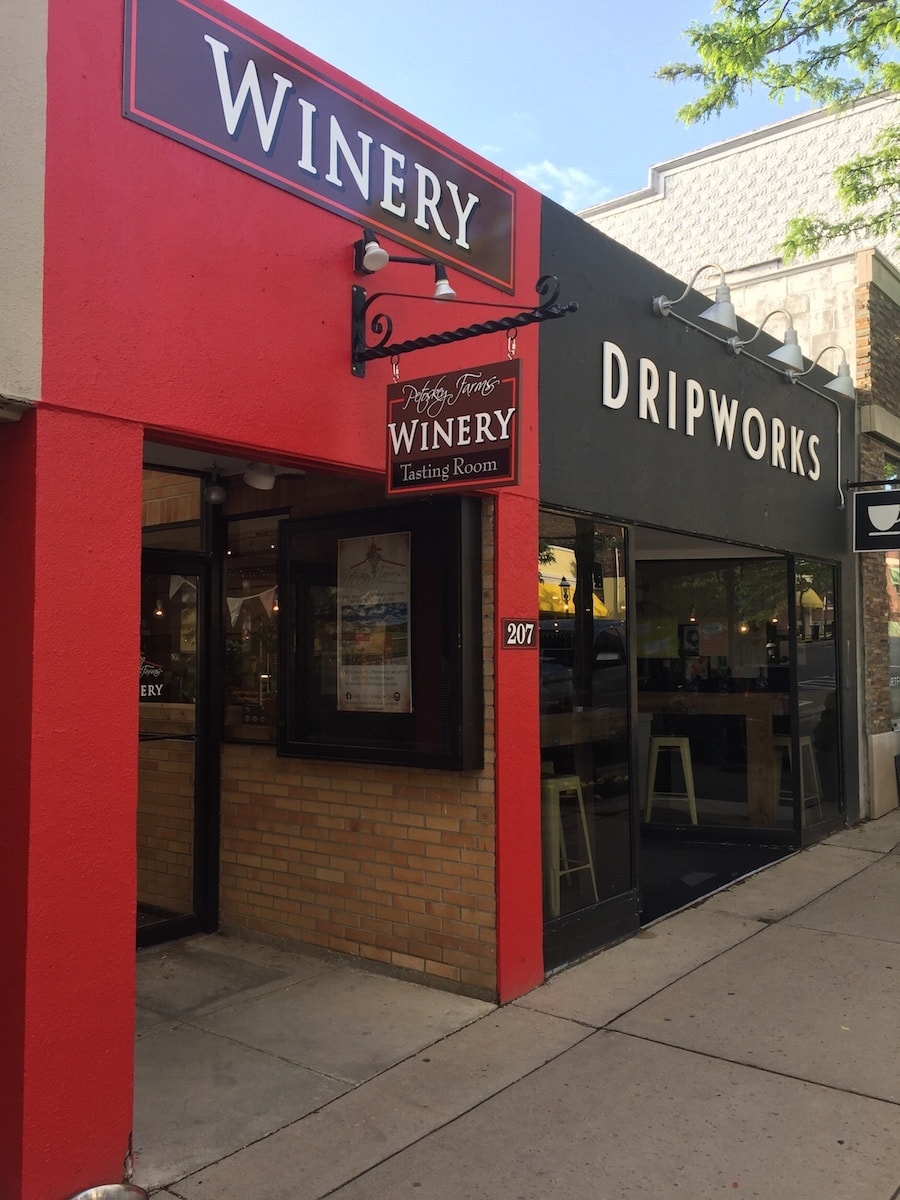 This year, the couple has expanded the business to include a tasting room in downtown Petoskey (207 Howard St.). That decision was prompted in part by a three-year construction project on their road which interrupted the flow of visitors. “We’re off the beaten path, and next year (construction) will be in front of our driveway. We decided we had to do something different,” Tracie says. They hope to open the downtown Petoskey location in June (any day now!) and will be pouring wine Monday–Saturday from noon to 8 p.m.

Ralph and Laurie Stabile have actually been in business the longest, opening in 2004—in the Upper Peninsula. They moved the facility to Petoskey as they ran out of room and opened Mackinaw Trail Winery in 2012. Stabile says winemaking is a family tradition, which has been passed on to their son Dustin who now runs the production side of the business. The family also operates Mackinaw City Crossings Tasting Room and Manistique on the Harbor Tasting Room. 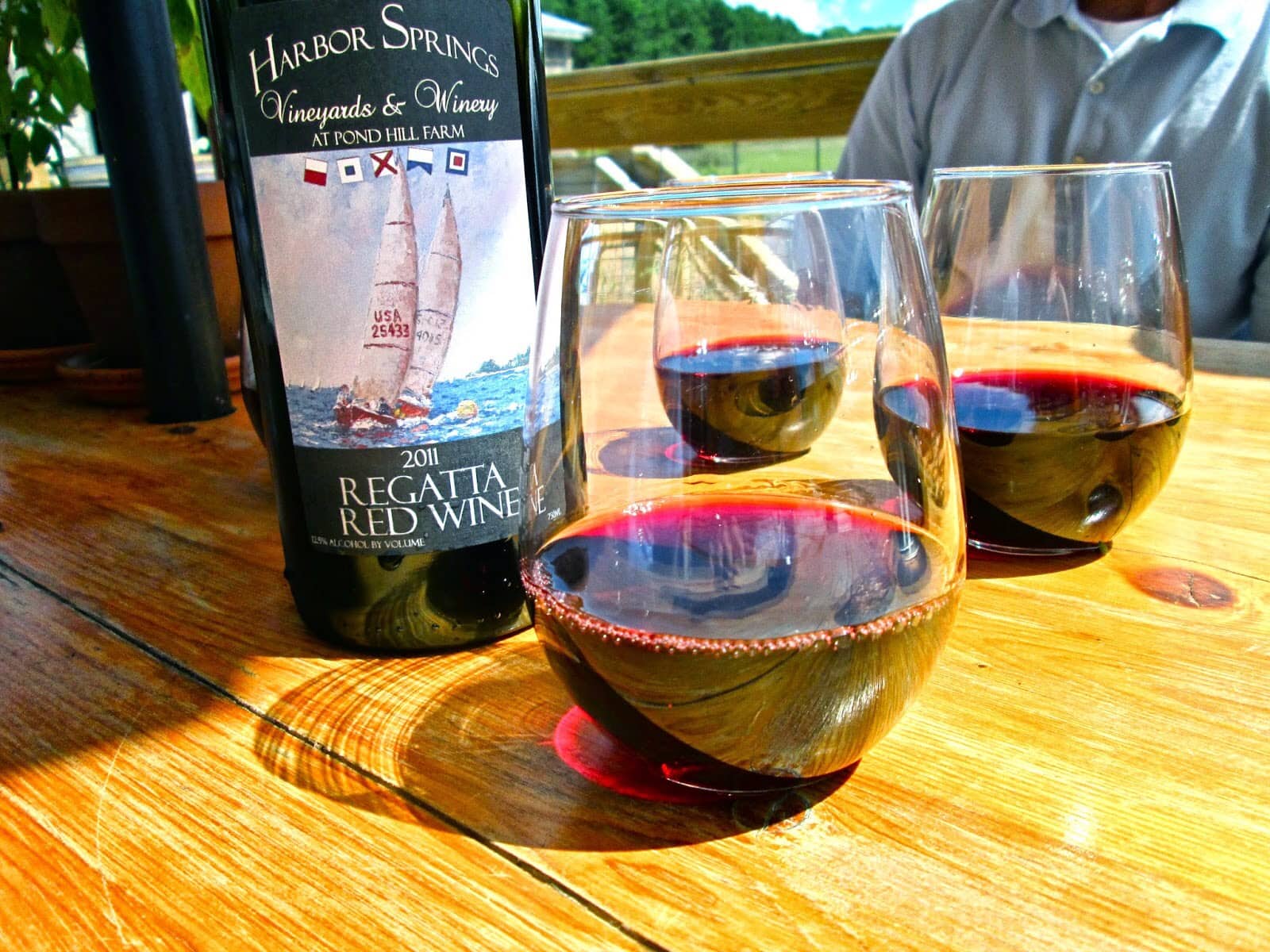 Pond Hill Farm, north of Harbor Springs, has a little bit of everything. It’s a working farm. It’s a brewery. It has a farm store with produce and prepared foods for sale. It’s a restaurant. And yes, it is a winery. Owner Jimmy Spencer says that multi-faceted approach is what keeps the farm viable. “We’re a little different,” he says. “The whole family can come, eat, drink, go on hay rides, feed the fish, launch a squash rocket. We have six miles of hiking trails, groomed in the winter. I’m thrilled to be part of the agri-tourism (movement).”

He says the Bay View Wine Trail has been a boon to all those involved. “It helps us. We all band together, promote each other and the area.” 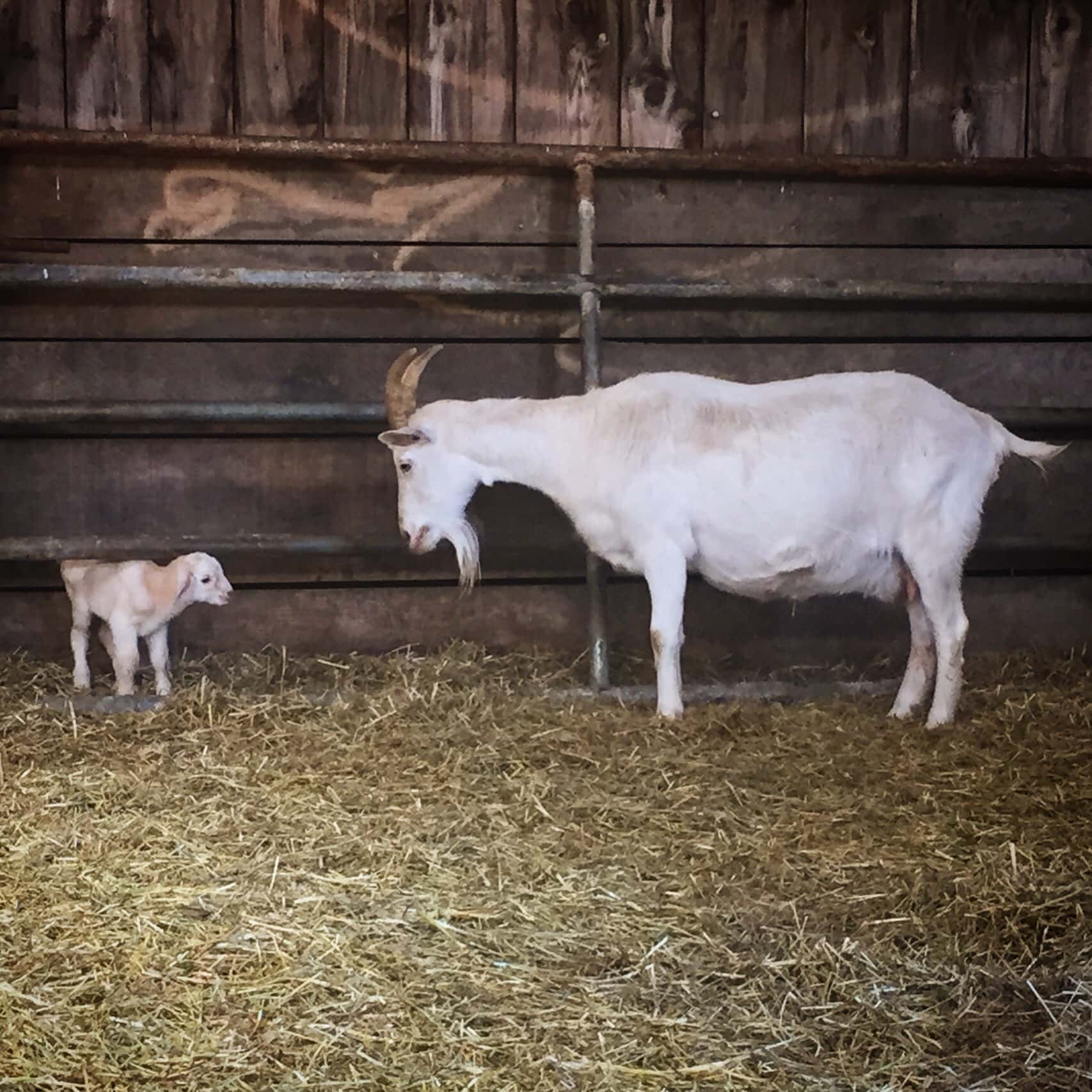 Resort Pike Cidery and Winery (3471 Resort Pike Rd.) will be the newest winery on the trail and is the sister operation of Mackinaw Trail Winery. It will offer 10 ciders and five sparkling wines, as well as three or four still wines. The new winery is planning to open in July—perhaps even by the July 4 weekend. Watch Facebook for the announcement.

The other is Chateau Lake Charlevoix (00551 Snyder Rd., Boyne City). Owner John Vrondran owned several acres of land, and decided his experience in the industry—he previously worked for Philip Morris, which had a number of wineries on the West Coast—would benefit him.

Vrondran says the winery is closed for the holiday weekend as his son is getting married and he wants to spend time with the family gathered round. Other than this weekend, “We’re open and running,” he says. Once family leaves, the winery will be open Wednesday through Saturday 12–5 p.m. It’s offering a pinot grigio, a pinot noir and a riesling, with three more varieties to come this summer. 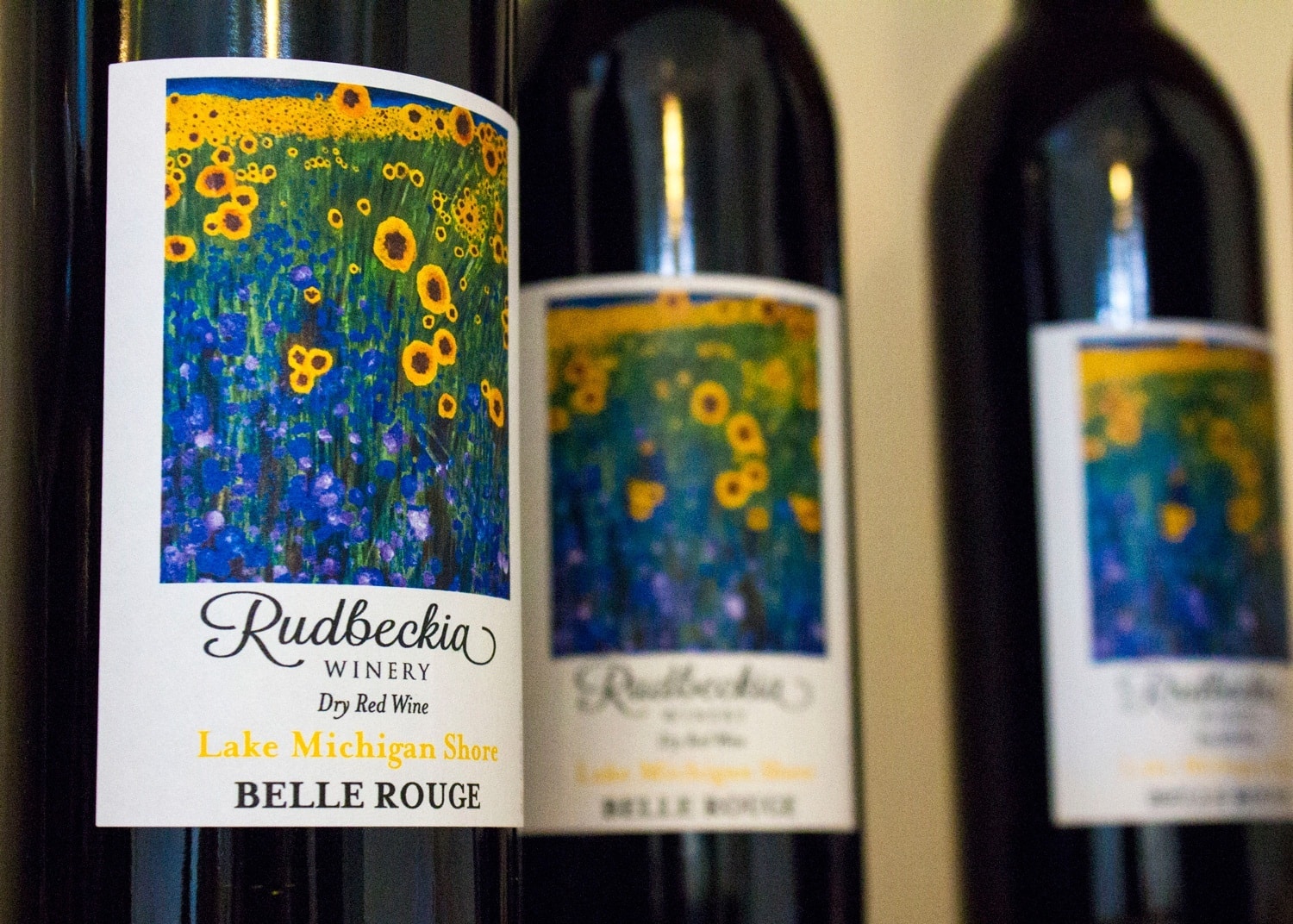 The wineries are all looking for ways to complement their wines and build their business. Maple Moon Sugarbush and Winery offers jams, butter, honey and maple products (try the maple ginger hard cider and maple root beer), as well as wine. Many offer their facilities for special events, such as weddings: Mackinaw Trail Winery has 13 weddings scheduled for the summer. Royal Farms is welcoming magician Ben Whiting July 29 and combining yoga and a wine tasting August 12; on Thursdays, visitors can opt for cider to complement barbecue.

Walloon Lake Winery is hosting a Pilates mat class every Tuesday and Friday as well as a sip and paint event. Crooked Vine is hosting “Grilling in the Vineyard” later this summer. The tasting room at Petoskey Farms’ original location will be adding a second weekly food and wine event, with food trucks on Tuesdays and Thursdays. New head winemaker Josh Morgan, who spent the last nine years at Black Star Farms, will be joining the team, as will his fiancée Sarah.

Wherever you go, the staff is sure to recommend stopping at other wineries along the trail. “There are close to 100 wineries in Michigan. We’re trying to do our marketing individually, but pool our money for the wine trail,” says Geoff Frey.

Click the cover to read the free Petoskey Vacation Guide!