The Mackinac Island Lilac Festival is an annual testament to how much the islanders love their lilacs. And why wouldn’t they? Every June, the island literally bursts into color.

Mackinac Islanders adore these shrubs—genus Syringa—that grow in every nook, cranny and corner of this eight-mile round island set in the Straits of Mackinac’s seamless blue beauty. Bill Chambers, president of Mackinac Island Carriage Tours, has his own lilacs remembrances. As teenagers he and his friend, Dean Gillespie, both octogenarians now, planted a grove of lilacs up on Surrey Hill where Carriage Tours is located. The bushes still bloom, wildly, happily, every June.  “All the island families planted them,” Chambers says. “But no one ever bought a lilac. You just dug them up—you couldn’t kill them. Even if you just left them to lie there, they’d find a way to root someplace.”

Metaphors for islanders and their favorite shrubs are easy pickings. Lilacs are tough as native islanders (or native islanders are hearty as these flowers?). Like their human counterparts, lilacs thrive in the cold Straits of Mackinac winters; neither lilacs nor island folk shrink from sinking their roots into the island’s craggy limestone bedrock. In fact, they crave that acidy terra firma. And last but best, lilacs prefer their soil the way these islanders like their beer: well-drained. 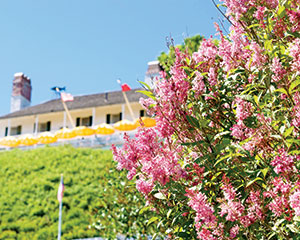 When the long, cold winter and cool spring finally ends, Mackinac lilacs show their joy by transforming the island into a fairyland of blossoms.  Cotton candy-colored tinkerbelles tempt from behind white picket fences. Big bold creamy Madame Lemoine lilacs strut next to a fluttery pink and white Beauty of Moscow in Ste. Anne’s churchyard. Down at the marina, where voyageurs working the Great Lakes fur trade once pulled their canoes, blue President Lincolns wave next to white Betsy Rosses. A froth that includes double pink Elizabeths and dark purple Monge spills out over the rolling green lawn at Marquette Park. And the gauzy backdrop to them all: the anything-but-bourgeois, lilac-colored common lilac.

The island is home to all 23 lilac species, some 400 varieties and thousands of individual plants. In June—and even into July in the case of late-blooming varieties—these flowers radiate their perfume into the windy Straits, where it melts into the aroma of warm fudge wafting from Main Street’s famous fudge shops and fresh horse apples (cars are banned on Mackinac Island) to create a signature Mackinac Island scent.

Lilac blossoms are ethereal and the trunks are leggy—lilacs grow taller on the island than anywhere else in the country. Lilac expert Jeff Young (known in lilac circles as the “rock star of lilacs,” according to the director of the Mackinac Island Tourism Bureau, Mary McGuire Slevin) visits the island each June during the 10-day Lilac Festival to lead informative lilac walks. As he tours groups past one impressive specimen after another, Young invariably refers to Mackinac Island as the Lilac Garden of Eden. A high point of the walk is at historic Grand Cottage, where an old common lilac measures the full three stories of the home’s federalist-style white clapboard facade. 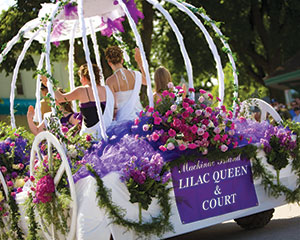 Mackinac lilacs live to ancient ages, and they have the girth to prove it. A while back Trish Martin, owner of the island’s Bogan Lane Inn, who has a master’s degree in botany, worked with a lilac expert from Canada’s Royal Botanical Garden on a stem-boring project. The team found a number of island lilacs as old as 130 years—and of course they could have come from an even older Mackinac plant.

For all the heavenly habitat-to-genus match, lilacs aren’t indigenous to the island. Syringa is native to Eastern Europe and Asia, and wasn’t brought to North America until the early 1700s.  For years, largely due to their great size, it was believed that Mackinac’s lilacs were among the very first in North America, possibly coming to the island via French Jesuit missionaries in the 1600s. But no one much believes anymore that a black robe remembered to pack along a lilac sucker with his cross and Bible.

Lilac experts, Young included, believe that most of the island’s earliest lilacs came via 19th-century settlers emigrating to Mackinac from New England—they brought “suckers dug up, wetted in sphagnum moss and transported with the rest of the furniture,” Young says. By the Victorian era, Young adds, lilacs were ornamental shrubs, purchased in mainland nurseries and transported in pots or burlap, probably by wealthy island cottage owners. “Lilacs were a central part of a Victorian garden, which was the style from the 1880s to the Depression,” he says.

For years, the earliest known written record of Mackinac Island lilacs dated to 1870. Gurdon Hubbard, an illustrious Chicago pioneer, built a summer cottage on Mackinac Island that year and named it The Lilacs for the flowers he planted around it.

Just last summer, an even earlier written documentation of lilacs on Mackinac surfaced, this one, surprisingly, by Henry David Thoreau, the famous 19th-century author of Walden Pond. It happened this way: Corinne Smith, a Massachusetts-based member of the Thoreau Society, was on the island to discuss her research into Henry David Thoreau’s visit to the island in 1861 (part of a journey from Massachusetts to Minnesota), and in particular, a journal that Thoreau kept that was largely devoted to the flora he observed on his trip. When someone in the audience asked if Thoreau had written anything about lilacs, Smith answered, yes, indeed, he’d mentioned them once, in a single word; above a line otherwise devoted to flowering apple trees. That scrawled word, Mackinac Island lilac aficionados knew at once, is now the earliest known written documentation of their lilacs.

That proof, that Mackinac’s lilacs predate the 1870 plantings at The Lilacs, has actually helped bolster a theory that Hubbard may have been Mackinac Island’s Johnny Appleseed of lilacs. Precisely true or not, the story is plausible. In 1818, at age 16, 52 years before he built The Lilacs as a summer getaway from his real estate and stockyard businesses in Chicago, Hubbard arrived on the Mackinac shore as an indentured employee of John Jacob Astor’s Mackinac Island–based American Fur Trading Company. No one knows for sure if the young Hubbard had a lilac sucker secreted away in his cloak. But we do know that it was May, the perfect season to transplant a lilac, and by his own accounts, he dearly missed his beloved family and his childhood on a Vermont farm known for its lilacs.

As in all things Mackinac, there’s a history worth recounting behind the Mackinac Island Lilac Festival. It was the brainchild of two island women, lilac lovers Stella King, who was also the island nurse, and Evangeline (Ling) Horn, owner of a popular restaurant and bar on the island. The two asked young Bill Chambers, back then a teenager working for his father at Mackinac Island Carriage Tours, if he’d set the parade up with a carriage and a team of horses to pull it.

As Chambers recalls, he couldn’t think of anything worse to do. Not only would the parade close down Main Street, the mainstay of his family’s tour business, but also horses get notoriously skittish around crowds and parades. Then again, how could he say no? King had delivered him (as she did all island babies back then), Ling was a friend, and he loved lilacs. So Chambers dutifully bedecked a Mackinac Island Carriage Tour carriage with lilacs and bridled up a team of horses to carry the first-ever Mackinac Island Lilac Queen down Main Street. And here’s the happily ever after for Chambers’s good deed: Many years later, he married that lilac queen.

Chambers is still the man behind the carriages and most of the horses in the parade—which has grown into a 10-day festival. Look for all things Mackinac during this blossom celebration: A Native American leads the parade (in honor of the island’s rich native history); Irish dance performances in Marquette commemorate the island’s Irish population; the Taste of Mackinac features food prepared by island chefs and lilac expert Jeff Young offers his daily Lilac Walk and Talks. The ferry lines, Fort Mackinac, the Grand Hotel and Mission Point Resort all amp up the fun with special events. New in recent years is the Mackinac Island Dog & Pony show (featuring entertainment by nationally known horse trainer Daryl Wallen) following the hilarious Epona & Barkus Parade. MackinacIsland.org.