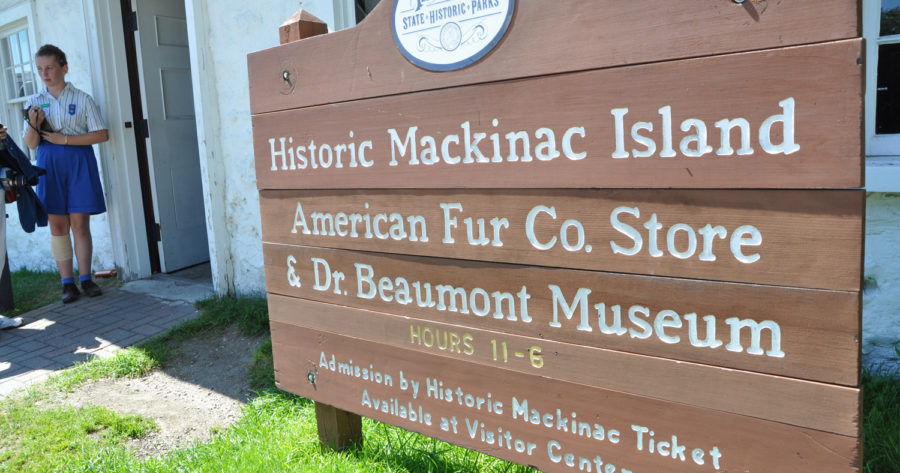 Mackinac Island. June 1822. The American Fur Company store bustles with voyageurs and clerks. Suddenly a thunderous crack breaks the buzz of commerce. A voyageur falls. He is Alexis St. Martin, and he’s been blasted in the belly from the accidental discharge of a shotgun from less than three feet away.

“Chercher le docteur!” you can almost hear his friends calling. The doctor is William Beaumont, the Army surgeon stationed at Fort Mackinac, and he comes quickly. Beaumont examines the hand-sized wound with the edge of a burnt lung protruding from it, discovers also a hole in the man’s stomach and sees the man’s breakfast spilling out. He decides that treatment is nearly futile.

But it is not in Beaumont’s character to give up. At age 37, the New England farm boy has already proven his tenacity by obtaining a one-year medical apprenticeship (his only medical training) and serving through the horrors of the war of 1812. So he cleanses the wound as best he can, clips off a bit of a rib with his penknife to ease the lung back inside, then applies a poultice.

By December, St. Martin is, miraculously, on the mend, with one exception. The hole in the stomach has not closed—and defies all Beaumont’s attempts to seal it. Instead, the tissue around the opening attaches itself to the tissue in St. Martin’s side, creating a gastric fistula, a permanent opening. A disturbing development for St. Martin, because unless the hole is covered, his last meal leaks out. But for Beaumont, the hole presents an opportunity for his curious medical mind: He can look through the shilling-sized cavity, into a living human stomach. Fascinated, Beaumont spoons in food, then siphons it out again. He attaches meat to a string, dangles it through the hole and pulls it out for observation. 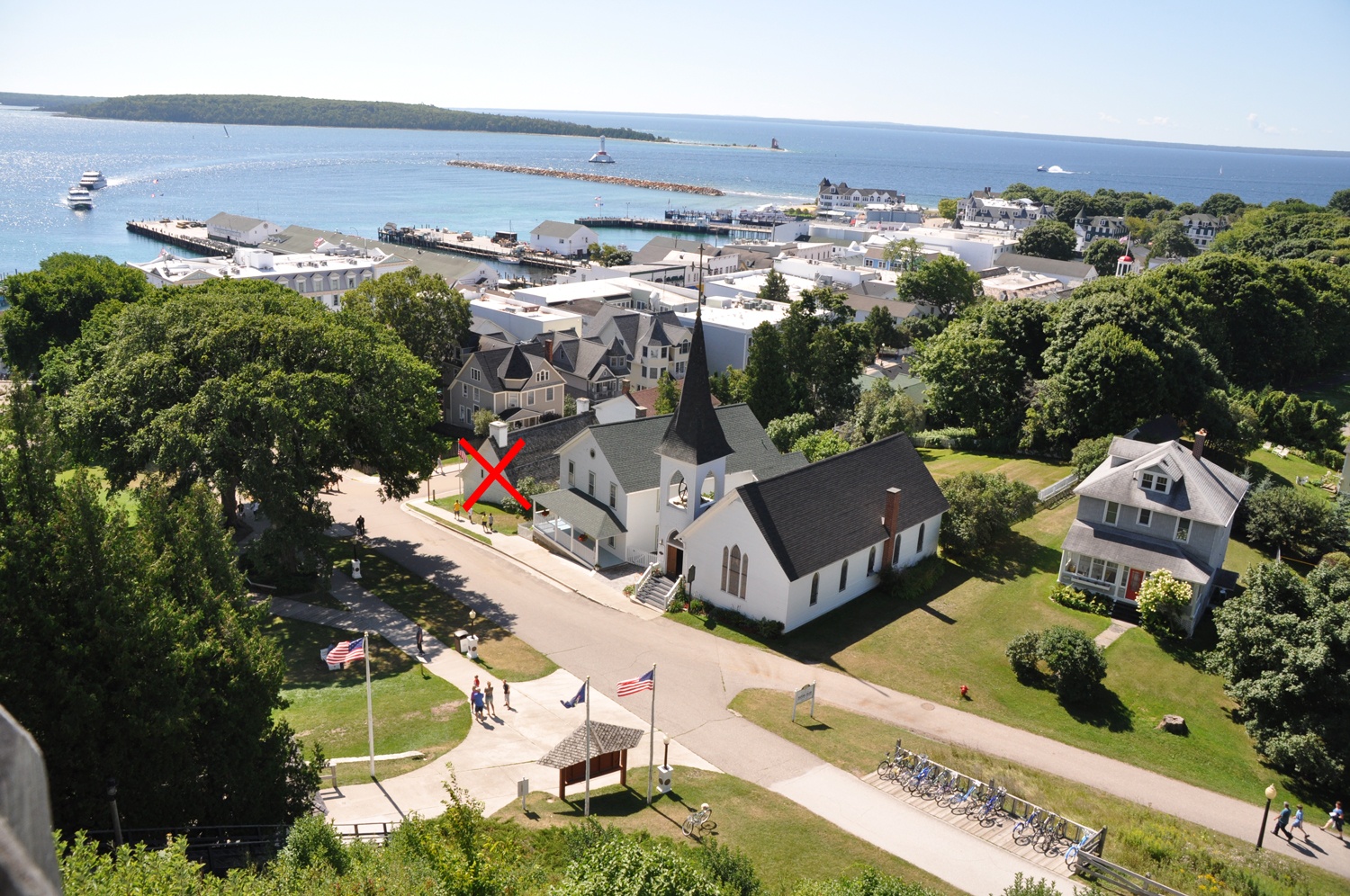 X marks the spot of the American Fur Company where Alexis St. Martin was shot.

While St. Martin’s gastric fistula was not the first recorded in history, it was the first time one was exploited for scientific research. With encouragement through letters from his friend, Army Surgeon General Joseph Lovell, Beaumont begins experimenting on St. Martin’s stomach on Mackinac Island in 1823 and 1824. He continues the experiments intermittently for the next 10 years, at his posts in New York, Wisconsin and Washington D.C.

Beaumont’s experiments settled a scientific debate waged on both sides of the Atlantic over the nature of digestion. Until Beaumont published his observations in his book, “Experiments and Observations on the Gastric Juice and the Physiology of Digestion,” most scientists believed digestion was either mechanical or chemical. The first attributed digestion to a grinding in the stomach, the latter to the solvent properties of gastric juice.

Beaumont proved once and for all that digestion in the stomach was chemical—a product (mostly) of the gastric juice itself which Beaumont surmised, correctly, was composed largely of hydrochloric acid. The discovery lifted the doctor from obscurity, and he became seen as the father of American physiology. The fact that Beaumont made these findings with the barest nuts-and-bolts medical background, in frontier conditions, and with no scientific training is a testament to his keen mind. But his biographer, Reginald Horsman, believes that Beaumont’s humble background, so unattached to an elite school or theory, also provided the foundation for his genius. Ultimately Beaumont’s discoveries “convinced most of those who read his work that here was an honest reporter,” writes Horsman.

Beaumont remains a star in the realm of scientific history. But there is also a more humanistic piece to the story, and it has everything to do with the man with the hole in his stomach, Alexis St. Martin.

If not for the stomach wound, Beaumont and St. Martin would not have met. Officers and voyageurs inhabited separate social spheres on the small island. “Army officers mixed with the island’s elite … while the voyageurs spent their brief time on the island camped along the beach and frequenting the village saloons and gambling halls,” says Phil Porter, director of Mackinac State Historic Parks.

Beaumont viewed St. Martin as something of a party animal, worthless except for what his stomach could do for science. In letters, the doctor often referred to his patient as “villain,” “drunkard,” and “ungrateful.” And when St. Martin left Beaumont once to go back to Canada because he missed his wife and children, Beaumont wrote that his subject “absconded.”

The doctor showed little concern for St. Martin’s physical or emotional well-being throughout the experiments, although they often left St. Martin lightheaded, nauseous, constipated and with a headache. Who knows what other sicknesses the Quebecois’ amazing immune system stanched, as Beaumont freely placed objects of questionable sterility, including thermometers and spoons, into the hole. We know, too, that St. Martin was ridiculed by his peers over his freakish stomach, as his brother, Etienne, also a voyageur, once stabbed another voyageur for taunting St. Martin.

To accommodate his experiments, Beaumont schemed various ways to keep St. Martin close at hand. On Mackinac Island he took the recovering voyageur into his home as a chore boy to prevent the Mackinac authorities, who’d branded St. Martin a pauper, from transporting him back to Quebec—a journey that Beaumont, to his credit, feared St. Martin couldn’t survive. Later, when he was healed, St. Martin became a hired hand in the home while Beaumont began experimenting on him.

In Prairie du Chien, Beaumont housed St. Martin, as well as his wife, Marie, and children. The family was treated as hired hands, and St. Martin was paid as such. Later, Beaumont arranged to have St. Martin enlisted in the army so he could receive a stipend to live on—although St. Martin’s only duty was to present his stomach to Beaumont.

Probably the oddest period the doctor and the voyageur spent together was during a stay in Washington D.C. The illiterate French Canadian and the proper doctor who spoke no French were alone together for long periods at a time—even on Christmas Day. From Beaumont’s records, we can surmise the relationship didn’t flourish. St. Martin was drinking heavily and angry and impatient, moods that showed up in his digestion.

Beaumont’s insensitivity toward St. Martin, says Horsman, “was typical of the age.” In an article entitled “Alexis St. Martin (1794-1880): The Intrepid Guinea Pig of the Great Lakes,” author Robert Helms agrees with Horsman. He quotes an 1843 letter from St. Martin to Beaumont that explains his unwillingness to travel and reveals, perhaps, the patient’s attempt to remind the doctor of his human condition. “I have not forgot you. I have had some sickness in my family, and lost two of my children, and was unwell myself for the best part of a year.”

Given all the discomforts of the experiments, why did St. Martin offer his stomach to Beaumont? St. Martin was wretchedly poor and the money helped—although his time with Beaumont kept him from pursuing his career as a voyageur or planting crops. But more fundamentally, St. Martin must have felt a duty to the doctor for saving his life.

The two never saw each other again after 1834, although over the course of the next two decades, Beaumont tried unsuccessfully to lure St. Martin to his home in St. Louis (where he eventually settled) for more experiments. Once, Beaumont sent his son, Israel, to Quebec as an envoy. But Beaumont and St. Martin could never come to terms. St. Martin wouldn’t visit without his family. Beaumont didn’t want the family, and even when he or St. Martin relented on that point, the doctor wouldn’t advance enough money to make the visit happen, for fear the “irresponsible” St. Martin would squander the funds.

Although a world apart, the men’s odd relationship haunted both to the end of their days. In 1840, Beaumont was called in as one of several physicians to assist the publisher of a St. Louis newspaper who’d been struck on the head with an iron cane by a politician who his newspaper had maligned. Beaumont performed a trepanning operation—cutting a hole in the patient’s skull to remove the pressure. The publisher died, and the politician went on trial for murder. In their defense, his lawyers accused Beaumont of drilling the hole in the man’s head just to see what was inside, just as he’d left the hole in St. Martin’s side. It worked. The politician got off with a $500 fine. (While Beaumont then and at other times has been accused of not closing the hole after the wound healed so he could exploit it, Horsman for one, believes the doctor didn’t possess the means or the knowledge to do so.)

But generally Beaumont’s later life in St. Louis was comfortable. He was happily married and had three children he adored. While Beaumont’s book never made him much money, it brought him prominence, which translated into a busy physician’s practice. Beaumont died in 1853, about a month after he hit his head on an icy step after visiting a patient.

St. Martin outlived his doctor by 27 years. In 1856, a charlatan, going by the name of Bunting and masquerading as a doctor, toured St. Martin around 10 cities, treating him like a circus freak. While in St. Louis, the pair visited Beaumont’s widow and son, Israel. Presumably, St. Martin made some money from the tour, but it wasn’t enough to lift him out of poverty in his old age.

Israel and St. Martin corresponded for the rest of St. Martin’s life. St. Martin probably would have appreciated some charity. But perhaps, too, both men sensed the importance they’d had in each other’s lives—a significance that had been lost within the social order of the early 19th century.

When St. Martin died in 1880, his family purposely left his body out to decompose in the sun before burying him in an unmarked grave—eight feet deep with rocks on the casket—all to keep the curious from exhuming it.

In 1962, St. Martin finally got his due when the Canadian Physiological Society decided it was time to mark his grave. The society’s sleuthing turned up the fact that St. Martin was 28 at the time of the accident, not 18 as had been believed for 140 years—largely because Beaumont recorded it that way. Beaumont, who knew every nuance of St. Martin’s stomach, apparently never bothered to check his subject’s age.

The American Fur Company store on Mackinac Island’s Market Street looks as it did the day of the famous accident—thanks to Mackinac State Historic Parks. From the store, wander into a Beaumont Museum, complete with a St. Martin mannequin. Yes, he’s outfitted with a hole so you can dip a string loaded with (faux) meat into the stomach. For more information, visit www.mackinacparks.com.

To read more on Dr. William Beaumont and St. Martin, check out the sources used for this article: