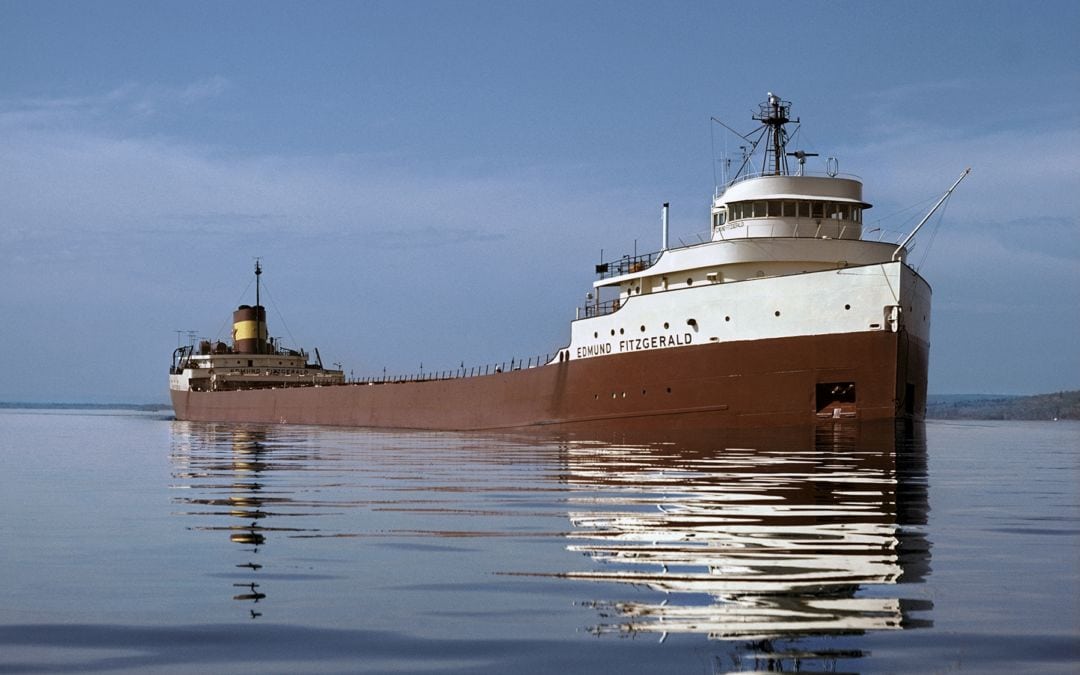 Around 7:30 p.m. on Monday, November 10, 1975, the Edmund Fitzgerald and her 29-member crew vanished beneath 25-foot waves in Lake Superior. At 729 feet, the ship was once the largest ore-carrier on Lake Superior.

That night, winds reached hurricane force at 75 miles per hour and the temperature dropped to 42 degrees. The storm had been brewing since November 8 as it moved northward from the plains toward the Great Lakes. The National Weather Service issued a gale warning for Lake Superior on November 9; the same day the Fitzgerald departed from Superior, Wisconsin bound for Detoit. Around 2:00 a.m. on November 10, the NWS upgraded the gale warning to a storm warning.

About 12 hours later, the Fitzgerald contacted a nearby ship, the Anderson, and reported, “a fence rail down, two vents lost or damaged, and a list.” Later in the afternoon, Captain McSorely of the Fitzgerald contacted the Avafor and reported they had a bad list, had lost both radars, and were taking heavy seas over the deck in one of the worst seas he had ever been in.

There are several theories as to why the ship sank, which are cited in a report by the U.S. Coast Guard Marine Board of Investigation. According to the report, the Fitzgerald was taking on water due to damage from the storm and around 7:15 p.m. it plunged headfirst into a wave and sank abruptly.

Two factors may have contributed to the ship’s sinking:

Information gathered from the Cooperative Institute for Meteorological Satellite Studies: “Sinking of the Fitzgerald,” Dr. Steve Ackerman and John Knox.