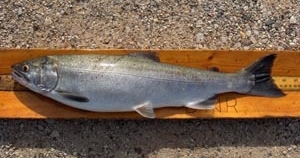 The Platte River is the birthplace of coho salmon in the Great Lakes, following the species’ experimental introduction there in 1966 to control the alewife population and to create a sport fishery. Today, nearly 50 years later, the Platte River State Fish Hatchery is the only hatchery in Michigan that rears coho salmon. The hatchery also serves as the primary egg source for the Great Lakes.

Each year more than 1.5 million coho salmon are reared at the Platte River State Fish Hatchery. Approximately half of those fish are stocked each spring directly into the Platte River, which flows through the hatchery’s grounds. For eight days over the course of the first two weeks in April, 100,000 fish are stocked each day. Prior to that, the coho salmon are intensively cared for at the hatchery for 18 months, the most critical life stage for the fish. When stocked, these fish are typically between 5 and 7 inches long and are just beginning to smolt.

The smolting process causes physiological changes in juvenile salmon, resulting in imprinting to their home stream. Following the smolting process, the juvenile coho salmon will migrate to Lake Michigan to spend the next 18 months growing and maturing. Once mature, usually by the fall of the following year, they will migrate back to their home stream, spawn and complete the life cycle.

To learn more about coho salmon – and the other fish species reared at the Platte River State Fish Hatchery, Atlantic and Chinook salmon – consider planning a visit. The hatchery grounds, located at 15210 U.S. Highway 31 in Beulah, are open to the public from dawn to dusk. The hatchery itself is open to the public from 8 a.m. to 4 p.m., Monday through Friday. Visitors will see what’s new and learn about the history of Michigan’s first and largest salmon hatchery.

The Michigan Department of Natural Resources is committed to the conservation, protection, management, use and enjoyment of the state’s natural and cultural resources for current and future generations. For more information, go to www.michigan.gov/dnr.