Last week I enjoyed an amazing Sicilian meal at Pepenero in Traverse City. Before I divulge any decadent details… full disclosure, I am not a food critic and I worked part time at Pepenero this summer, so I know the staff and the restaurant well. This, however, was a brand new experience for me because a.) I wasn’t working and b.) it’s the first wine dinner that they have done so far.

For those who aren’t familiar with Pepenero it means black pepper in Italian and it’s owned by Sicilian born and raised Giorgio Lo Greco and his wife, Monica. This authentic Italian restaurant is an intimate place (only seats 40 maximum!) snuggled into the Mercato at the Grand Traverse Commons.

The Sicilian Wine Dinner was sold out, meaning 40 people were at the event on a chilly November evening. It didn’t feel crowded though. A group of people sat outside in the hallway seating and the rest were inside. Tables of six meant that if you didn’t know your neighbors, by the end of the night you would be well acquainted. I sat at the bar with my mom and the wine expert for the evening, Rick Westgate and his wife. Personally I think the bar seating is the best place to sit at Pepenero because it allows for interaction with the staff and usually Giorgio, cooking away.

The evening began with some bubbly Italian Prosecco and Giorgio slamming pot lids together in the middle of the dining room to get everyone’s attention. This led into a speech where he told everyone that there were “so many nice and good looking faces” and that he was “very pleased” about the turnout. Then Rick gave a brief introduction about some of the wines we would be sampling. He went over some of the places in Sicily that the wines were from and even passed around special soil samples from the different regions of Sicily in small plastic globes. While this was going on the staff was unobtrusively setting down two person share plates of Sicilian anchovies, crostini and Sicilian olives. After the course of Sicilian anchovies, the staff poured a new wine, La Segreta Bianca to pair with the “Antipasto” or starter dish. Before the food was served, Rick talked briefly about the wine, its origin, flavor and process and welcomed anyone to ask questions throughout the course of the evening. Then we were served the Antipasto, which I was semi-concerned I wouldn’t like because arugula isn’t my favorite but it was fresh and delicious with the pomegranate seeds giving it a really satisfying little crunch.

The evening continued with four more courses at this measured, yet leisurely pace. With each new pour, Rick would explain it to the group inside the dining room and then go make his speech in the hall for the people sitting there. The pours were more than sample size but less than a really large pour so it was a perfect amount to last throughout the dish it was paired with. The service was really great and they were attentive but not overbearing. The portions were a good size too, I wasn’t so full that I couldn’t move, even after the amazing dessert course! Overall, the evening lasted a little more than 3 hours, but with such good company and great food, time truly slipped away unnoticed. One of the biggest goals Giorgio had in opening this place was to have it feel like a neighborhood gathering point, where everyone knows everyone and new people are welcomed into the fold. That night it seemed safe to say that he and Monica have achieved that goal. I saw a good mix of regulars as well as newcomers enjoying themselves and mingling at the shared tables.

As we emerged from Building 50 into a frosty November night with the first flakes of the season flying through the air, I reflected on a truly special evening.

See below for each course, its description and the full menu.

Click the arrows in the upper-right corner of the gallery to enlarge images; hit “Escape” on keyboard to exit full-screen: 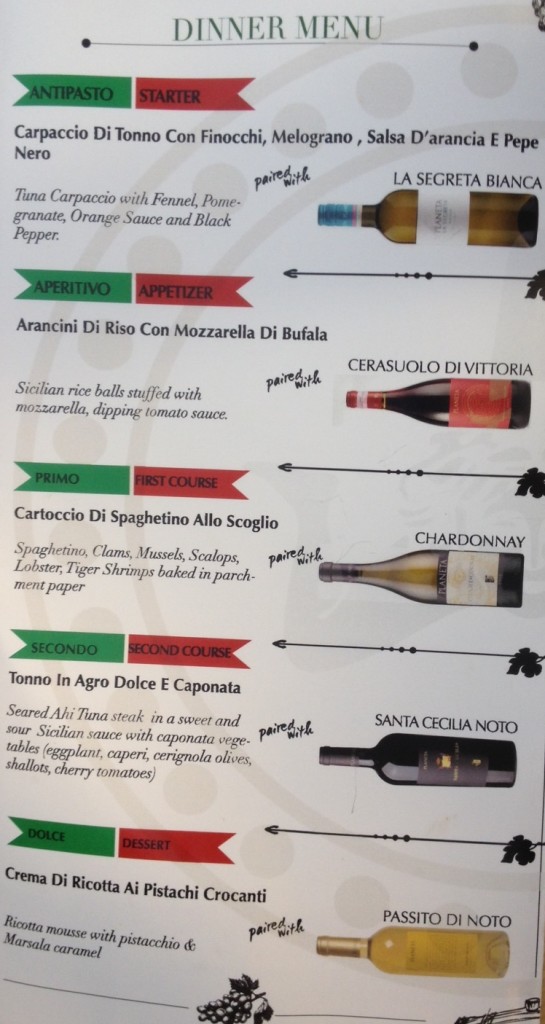 The next wine dinner will be on Tuesday, December 9 at 6:30 pm, featuring Lombardy and Piedmont. For more information check out the Pepenero Facebook page or call: 231.929.1960.

Pepenero is open for lunch and dinner Monday–Saturday.

Behind the Scenes at Pepenero

A Look Inside Cordia

The Shops at The Village at Grand Traverse Commons