The ninth stop on the 2014 Ultimate Up North Kitchen Tour is located in Traverse City at 2345 Montmorency Lane. After years of living near trees, the owners wanted to play up the colors of the coast in this Old Mission Peninsula kitchen.

The colors of the shore—aqua, sand, creams and soft greens—define this light-filled kitchen on Old Mission Peninsula. It wasn’t always that way. When Mike and Amy Petersen purchased their dream Northern Michigan home after years of vacationing here, the only substantial change they wanted to make was to lighten up the dark-wood palette to better reflect their view of West Grand Traverse Bay. “We’d almost always lived in tree-filled locations, and we really wanted to play up the coastal feeling,” Amy explains. 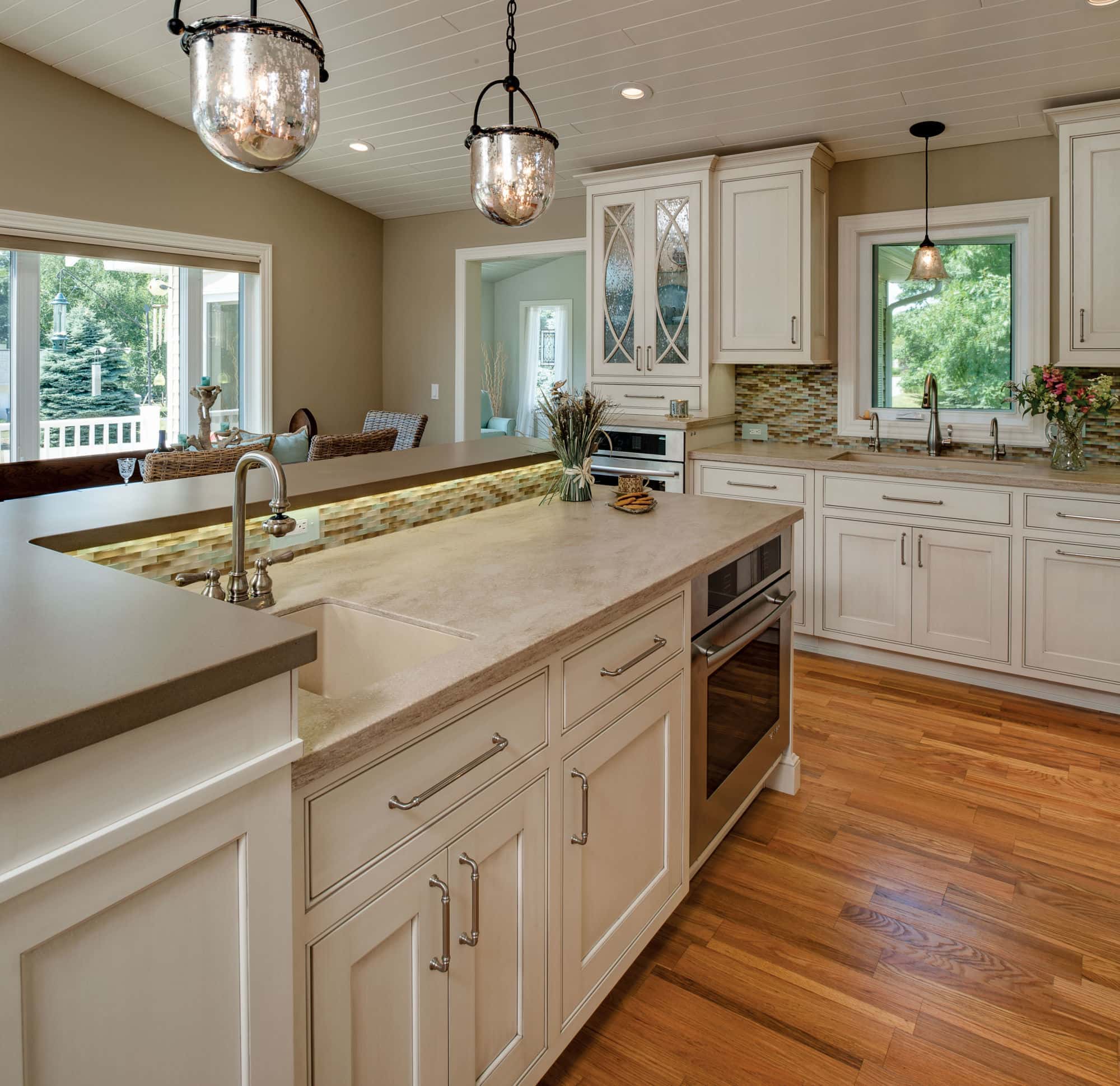 To make their vision into reality, the couple worked with builder Rex Schleem (a childhood friend of Mike’s) and designer Sandra Bargiel.  One of Amy’s first choices, a glass tile backsplash, carries all of the colors of the new palette, and sets the stage for creamy white contemporary cabinetry and new Corian Sagebrush countertops.  The new bi-level island makes it easy to conceal the mess of cooking from guests visiting the cook. It is also, says Amy, packed with storage. As is the rest of the cabinetry that is outfitted with hidden drawers where toe-kicks are traditionally installed.

The striking aqua cooktop backsplash evolved through discussions with Sandra. While the Petersens loved the look of glass, they didn’t want to continue the glass-tile backsplash to the stove area because the mosaic has an irregular surface they worried would make cleaning difficult. Instead, Sandra urged the couple to pick one color out of the tile and order it in a frosted, solid, sheet of heat-tempered glass. Now, mounted on the wall coated with heat resistant paint, the breezy aqua backsplash evokes a pool of water and is a major focal point in the kitchen.

New French doors topped with transoms replaced the old sliders and allow daylight to pour in—helping make this the room that Amy describes as the heart of the home. A church pew from Amy’s childhood and an antique table the couple purchased from nearby Brys Estate Vineyard round out this warm and inviting kitchen.