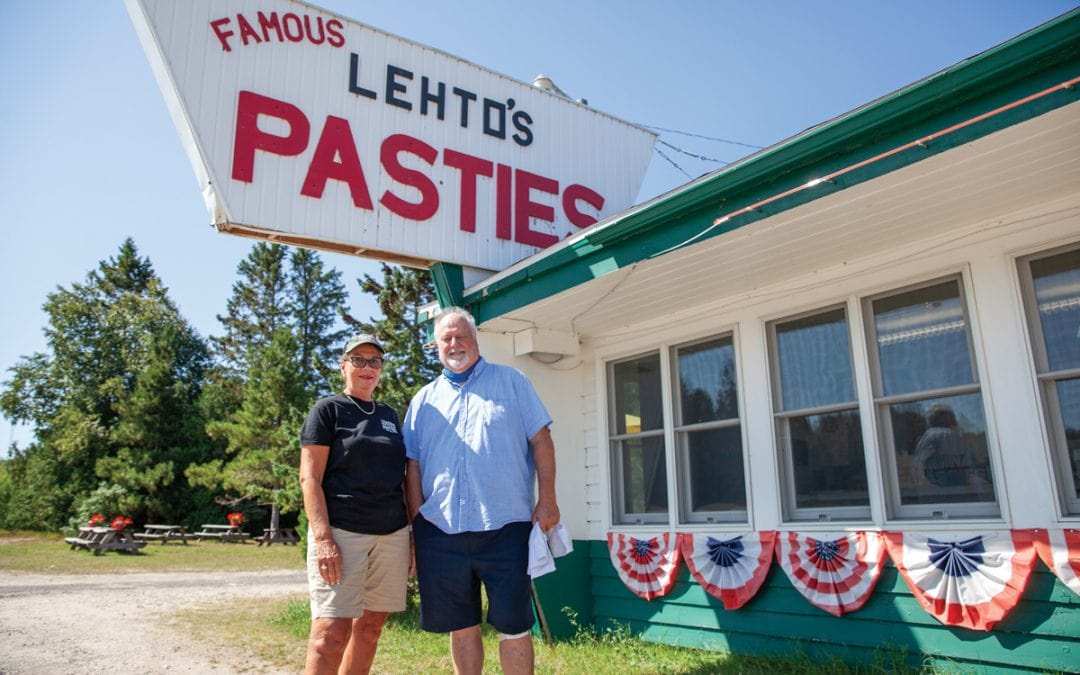 Driving west from St. Ignace along U.S. Route 2 in Michigan’s Upper Peninsula, the promise of that above-the-bridge vibe hits in true form as I pass by the first round of chain restaurants. I’m hungry, but no commercial fast food for me.

I’m in search of a pasty: the U.P.’s most famous food and, as they say up here, the world’s original fast food. That’s why I am headed to Lehto’s Pasties. Pasty shops have been coming and going all over the U.P. for decades, with some popping up below the bridge in the mitten, but few have stayed true for as long as Lehto’s. 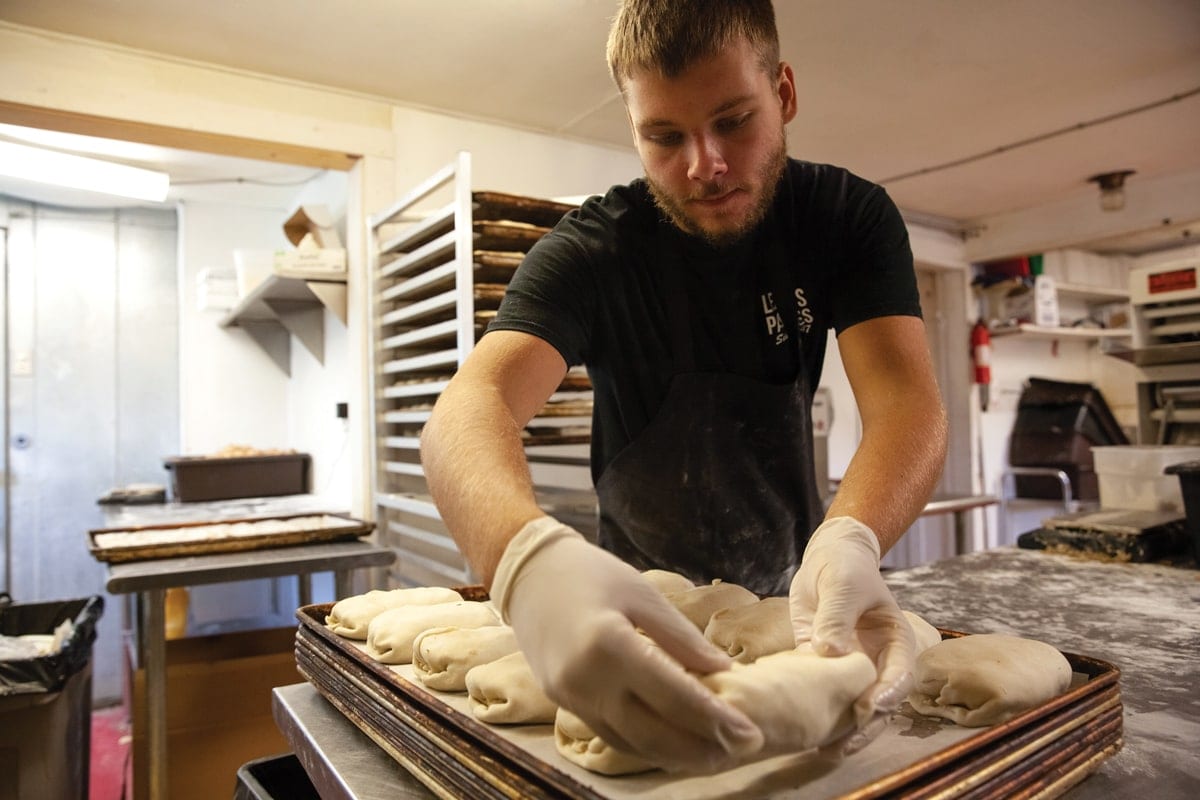 For those who don’t know, a true pasty is a hearty handheld pastry packed with comforting ingredients like beef, potatoes and other root vegetables and is built to match those that the earliest miners in the U.P. carried in their lunch pails or even their pockets. There is agreement that true pasties include rutabaga, the ingredient that most consider to be the deal-breaker on whether it’s a real pasty or something else entirely. After that main ingredient, the debate over what makes a true pasty continues to rage. The way Lehto’s makes their pasties, inside and out, has a lot to do with why they’re often recognized as one of the purest, true-to-form pasty shops you can find. Lehto’s Pasties has two locations now, with a new spot in downtown St. Ignace, and the original located about eight miles west of the Mackinac Bridge on Route 2. I decide to visit the original location first.

As soon as you see the jutting sign at the original Lehto’s, you know this is the real deal. The building itself has barely changed since it opened more than 70 years ago. The long history and regional fame dwarf the actual size of the operation. Quickly, the aroma and textures place you at your grandma’s vinyl-topped kitchen table. It’s a simple, cozy takeout counter, backdropped with black and white photos of family and newspaper clippings. Owners Bill and Laurie Walker also have some proud displays of their son, Max, a graduate of the U.S. Coast Guard Academy. This is a family business, there’s no mistaking that. 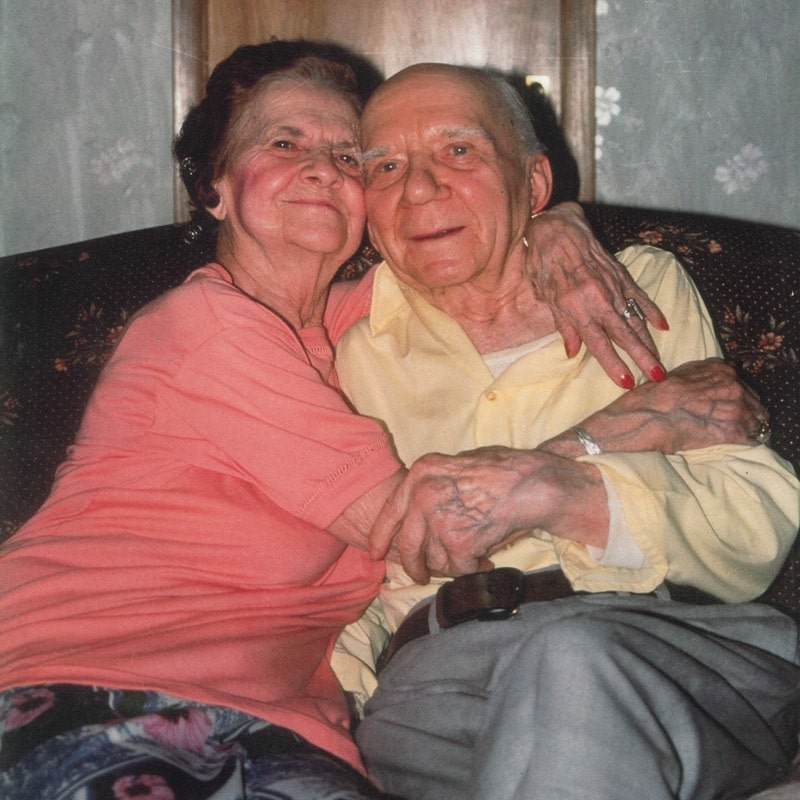 “My wife’s aunt and uncle, Johnny and Cassie, opened the shop up in 1947,” remembers Bill. “Then their daughter and granddaughter worked alongside them here for a long time, and then when they passed away, Dee, my wife’s cousin, took it over. Then, when she passed away, her brother ran it for a year. He approached us, and then we bought it and took it over about five or six years ago.” Lehto’s has been a family-owned business for more than seven decades.

Read Next: Where to Pull Over for Pasties in Northern Michigan

Once inside the shop, Bill gets right to why his pasties are king. “One thing we do is we slice our potatoes and we shred our rutabaga, and it layers easily,” Bill says. “Our pasty, you can eat it out of your hand. It’s not going to fall apart. People that cube or dice their vegetables, you have to really eat that on a plate with a fork. Ours holds together.”

The handheld aspect is more important to its origin than you might think. “That’s what they did in the mines,” Bill says. “That’s the original food. They’d take it down, carrying it in their pocket, and they’d eat it out of their hand down in the mines. It’s supposed to be handheld.”

The pasty, a derivative of a broader family of medieval meat pies, originated in Cornwall on England’s rugged southwestern peninsula. Cornish men and boys going to work underground would grab their pasty as they left home, labeled with their initials written in the dough with a toothpick. That personalized pasty was a comfort down in the dark and dangerous tin and copper mines. In the 1840s, when prospectors began seeking out Michigan’s Upper Peninsula, experienced miners from Cornwall immigrated to help develop the mines. They brought the pasty with them and, despite larger waves of immigrants from Italy and Finland, the Cornish pasty stuck as the preferred miners’ food. 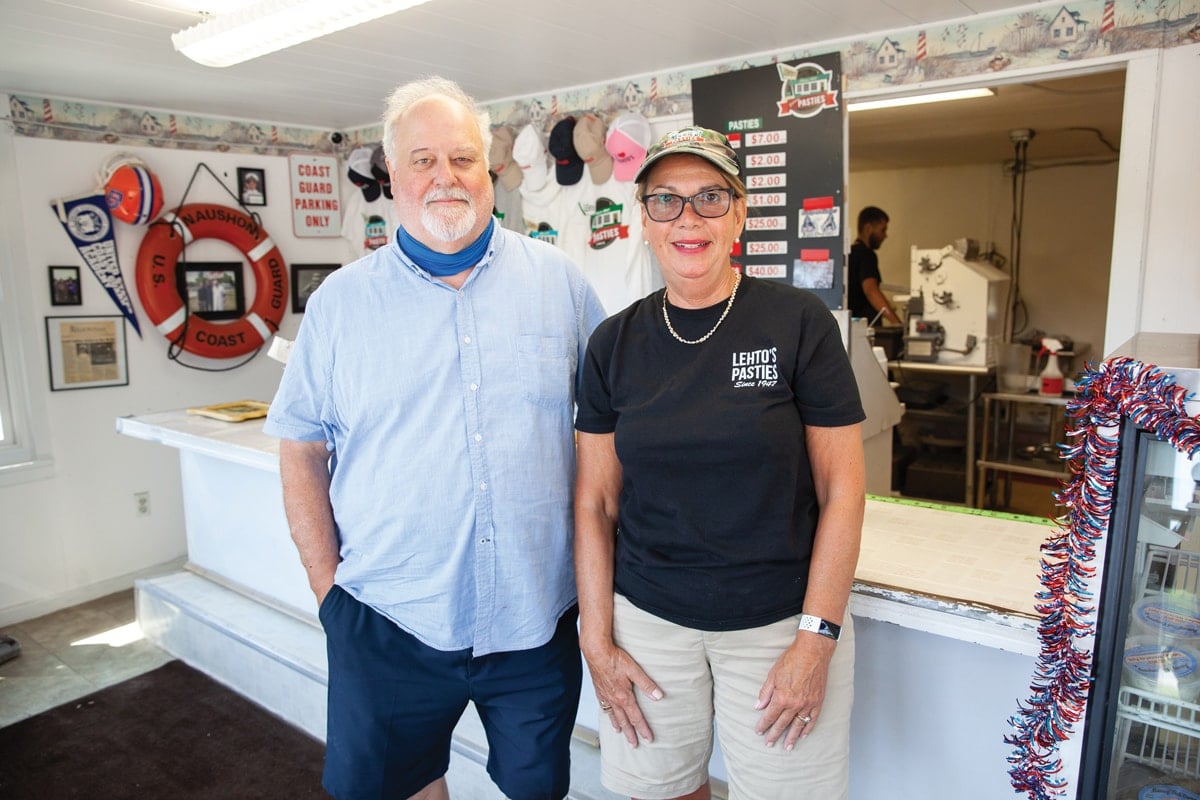 Lehto’s tries to stick to the original form as much as possible, while still offering a very select assortment of other options for people who may want to try the concept of a pasty, but aren’t interested in its purest form. For starters, the beef pasty is the original and remains the most popular at Lehto’s. At the new location in downtown St. Ignace, they also offer a chicken and vegetable version in addition to the beef, accommodating dietary restrictions and letting visitors enjoy the closest thing to an original pasty as possible. If you want the true experience, menu limitations and all, the original location offers only the beef pasty.

While there is ongoing debate about the structural integrity and the internal ingredients, the real controversy comes when folks want to introduce a condiment into the formula. Like most proud, regional cuisines, there’s a right way and a wrong way, according to the locals. For instance, in Chicago, you just don’t put ketchup on your Chicago-style hot dog. Or, depending on what region you get your ribs, if there’s a dry rub, it might be insulting to ask for sauce. For Lehto’s, and most of the Upper Peninsula, the condiment choice is ketchup, or you eat the pasty plain—no gravy. It’s a lot about the intended taste, and the gratuitous addition of sauce is not needed to make it taste good, so it’s also very much a pride thing.

“The theory behind the gravy is that bad pasties need gravy,” Bill says, with a slight grin. “They’re not moist, they need the extra flavor. If somebody asked for gravy, Aunt Cass would say, ‘My pasties don’t need gravy.’”

Today, one of the things Lehto’s Pasties does to bridge the gap between staunch purist and pleasing the customer is to make intentional decisions on what to offer, what to suggest and what to just not make available. Bill and Laurie want people to enjoy the experience, and in their eyes, the enjoyment comes from not just the taste and service but also from understanding the roots and the original concept. The philosophy behind the pasty from the very beginning was to provide a bit of comfort while away from home, and Bill wants to offer that. Since pasty shops below the bridge offer gravy, Lehto’s customers from downstate prefer what they are used to. “We added gravy,” Bill admits. “We see a lot of gravy in the summer and then when summer’s over, the gravy sales go down quite a bit. So, it’s the down-staters that come up who want the gravy.”

At the original location, I set my eyes on the comically small menu. A beef pasty, optional gravy side (yes, they charge for this, and you know why) and a pop or water. That’s the entire menu. So, after much deliberation, I ordered the beef pasty, no gravy. It was deeply comforting, and truly handheld, just what I was expecting after my chat with Bill. What was surprising was how flavorful it was, just as is. Going no gravy is not for the sake of being true to form—Lehto’s beef pasty really doesn’t need gravy. If you want to try other options, the menu does suggest going to the downtown St. Ignace location. 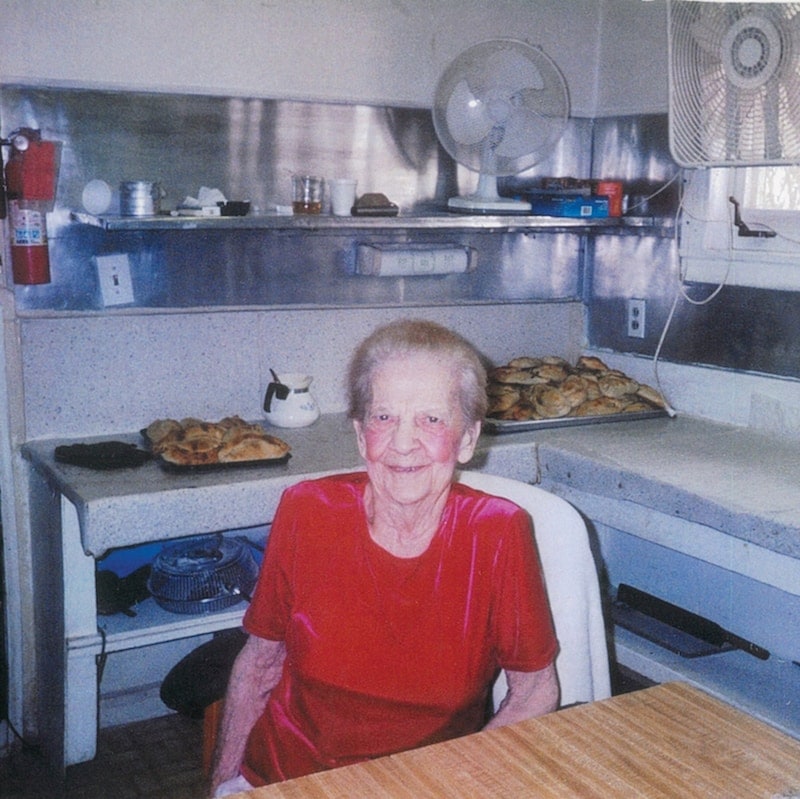 They haven’t steered me wrong yet, so I figure I might as well follow this final suggestion and check out their new digs.

The St. Ignace location is bright, modern and inviting, but for the most part, structured the exact same way as the original location. A simple takeout counter, and a brief menu. For the sake of this article, I ordered all three options—chicken, veggie and another beef. I also got a side of ketchup this time, just to test the waters. However, I did NOT get gravy. I will only do so below the bridge, and only if suggested by the specific pasty chef I patronize.

I enjoyed the chicken and veggie options. They were surprisingly quite a bit different from the original beef. I took that as a sign that Lehto’s is not in the business to recreate the original pasty. If they’re going to make new versions, they’re going to be brand new, stand-alone pasties. Despite how tasty the chicken and veggie pasties were, I have to admit the original beef is my favorite. There’s just something about it, beyond the taste, that brings it all together. They also offered a cookie, which again, I had to try for the sake of the story, and it was actually one of the best chocolate chip cookies I’ve had in a while. It fit perfectly with the rest of the menu—simple, comforting, extremely tasty, and, of course … handheld.

Chris Loud is the co-founder of The Boardman Review and writes from Traverse City. Follow him @cfloud on Instagram // Allison Jarrell is associate editor of Traverse Magazine. allison@mynorth.com 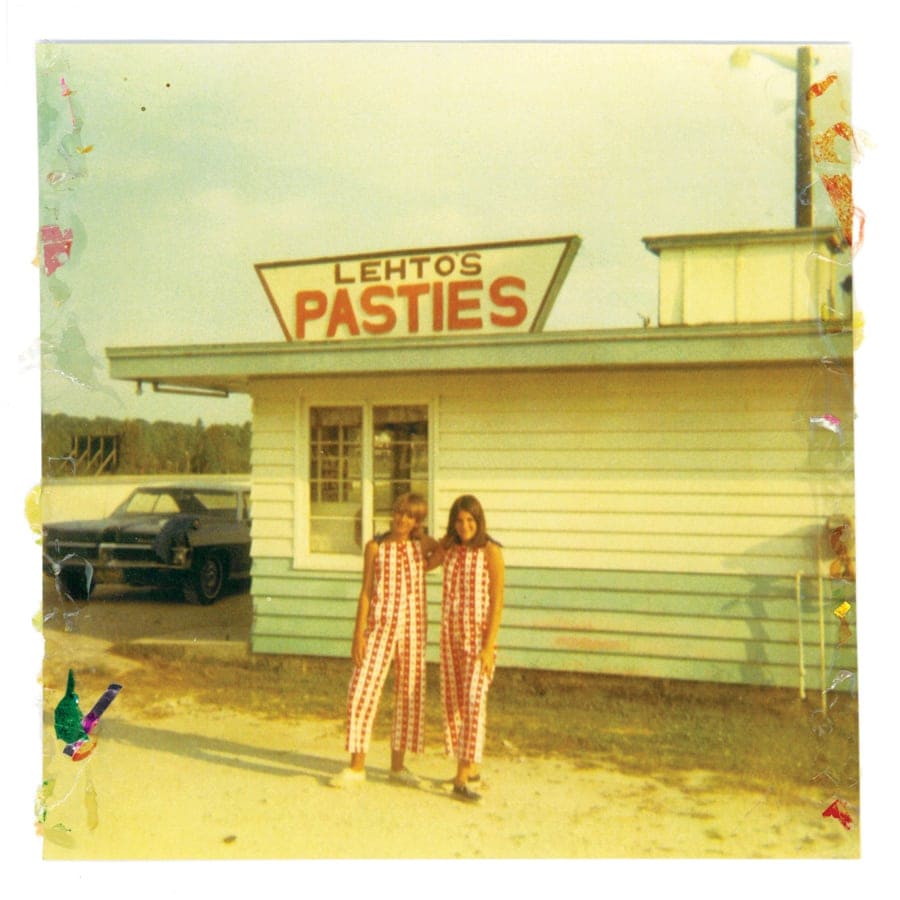 Find this and more articles celebrating Northern Michigan life, food & drink in the October 2020 issue of Traverse, Northern Michigan’s Magazine; or subscribe and get Traverse delivered to your door each month.