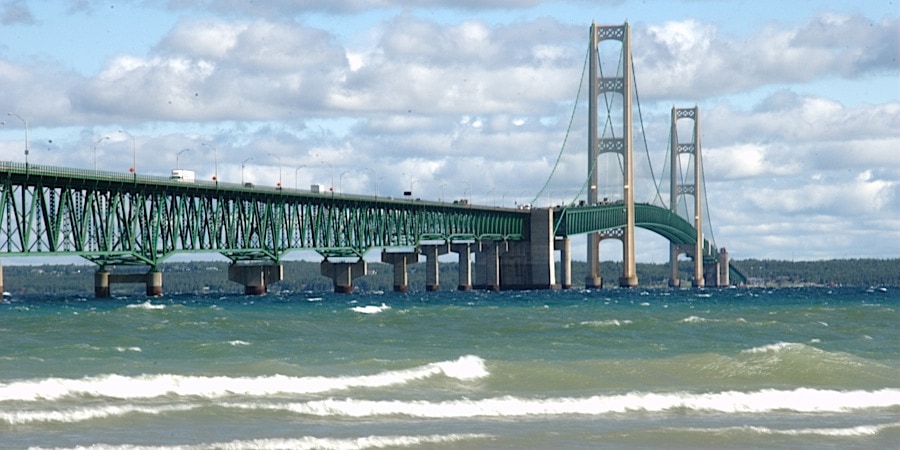 $56,295.  That’s the amount of money that two Northern Michigan conservation groups raised by participating in “The $10,000 Charity Thing”—a fundraiser/competition co-sponsored by the outdoor companies Moosejaw Mountaineering and Patagonia.

The Leelanau Conservancy and the Michigan Land Use Institute placed in second and third respectively in total funds raised, with the Leelanau Conservancy being edged out by the organization “Keep Tahoe Blue” for the first place spot within hours of the competition’s conclusion.  As such, both groups will receive bonuses for placing in the top three, and with Cherry Republic’s adventurous owner Bob Sutherland vowing to match the bonuses, the money raised on top of the funds collected during the competition add up to $10,000 alone.

The Michigan Land Use Institute raised a total of $21,728, with a $2,000 bonus from Moosejaw and Patagonia, and a $2,000 match from Cherry Republic.  MyNorth’s Evan Perry caught up with the Leelanau Conservancy’s Larry Mawby, Susan Price, and Carolyn Faught, and also the Michigan Land Use Institute’s Jim Lively after their blood-pressures had lowered enough post-fundraiser to conduct a proper interview.

How did all this—”The $10,000 Charity Thing”—start for the Leelanau Conservancy?

Faught: Molly Connolly—who lives near Glen Arbor and works from home with her two kids—sent us an e-mail saying that she had nominated us for this fundraiser.  She wasn’t on any of our mailing lists, nor is she a member of the conservancy, but before we knew what was happening we’d already raised $500 dollars in donations, which was so exciting.

We consulted with people in the office about how to approach the fundraiser, and ended up sending two mass e-mails about it, and we put it up all over Facebook … it was very grassroots.

What were you expecting when you first learned that you were now participating in the fundraiser?  It seems like it really took off—sort of a slug-fest between you and the Lake Tahoe group.

Price: The big bonus was great.  And then Cherry Republic offered to match the prize money, which I think motivated people to donate, because it effectively doubled the bonus.

Did you recognize the names of people who donated?

Faught: Yes, but we’re thrilled because a lot of brand new donors contributed.  We haven’t yet had a chance to sit down and look through the list to confirm who is new.  We’re elated with the response from social media; we asked people to forward our e-mails to friends, and we asked people to use Facebook and to Tweet it out, and we were actively Tweeting, and Cherry Republic was Tweeting…we would never have raised that much money without social media.

Do you have any idea how you’ll allocate the money you raised?

Mawby: We’re going to have a big party!

Yeah, you gotta have a barbecue!

Price: No, we’re not having a party!  We’re working on that; this fundraiser was huge for us.

Faught: It’s all about building awareness of the Leelanau Conservancy, and harnessing that love for Leelanau County that’s out there.  There are so many people who are friend’s of our Facebook page, and to have them step up and donate—to be actively engaged in helping us get the prize money—really shows that people care about Leelanau County, and also how widespread that love for Leelanau is.  I’m really excited to look through the names and see where people are from—probably all over the country.

Any plans on contacting the Lake Tahoe Group?

Faught: We were just thinking about that!  We figured it would be good to call them up and congratulate them.

And the Michigan Land Use Institute’s Jim Lively:

Did the fundraiser exceed you expectations?

It certainly exceeded our expectations.  We’re not even sure who nominated us, to be honest.  We participated in this same event three years ago, but the response this year was much stronger than it was previously.  A lot of media outlets picked up the story and helped to spread the word.

Can you describe what objectives this money will help accomplish?

A main goal of our organization—and the one we wanted to highlight for the fundraiser—is to bring awareness to the oil pipelines that run under the Straits of Mackinac, and also the pipelines that eventually run to the St. Claire River.  The pipelines under the Straits pose a very real risk to the ecology of the Great Lakes—the same company that operates these lines also runs those that ruptured and spilled oil into the Kalamazoo River.  So this money will be spent to develop a comprehensive plan to raise public awareness of this issue.  We held a rally at the Mackinac Bridge last year with TC350, which went really well, so we’re excited to see what these funds can accomplish.

As an organization, we aim to promote sustainable energy practices in the state, and while we know that an economy that doesn’t use pipelines to transport fuel is very far away, we can still make progress through advocacy and raising public awareness.  This fundraising effort was great because it not only raised money for us, it also advertised our goals to a broader audience.

Any taunting between the two groups?

No, no, no…there was no communication between us.  We know those guys; they do great work.  We were just excited to see our region so well represented in this fundraiser.  It shows that people in Northern Michigan really care about conservation.