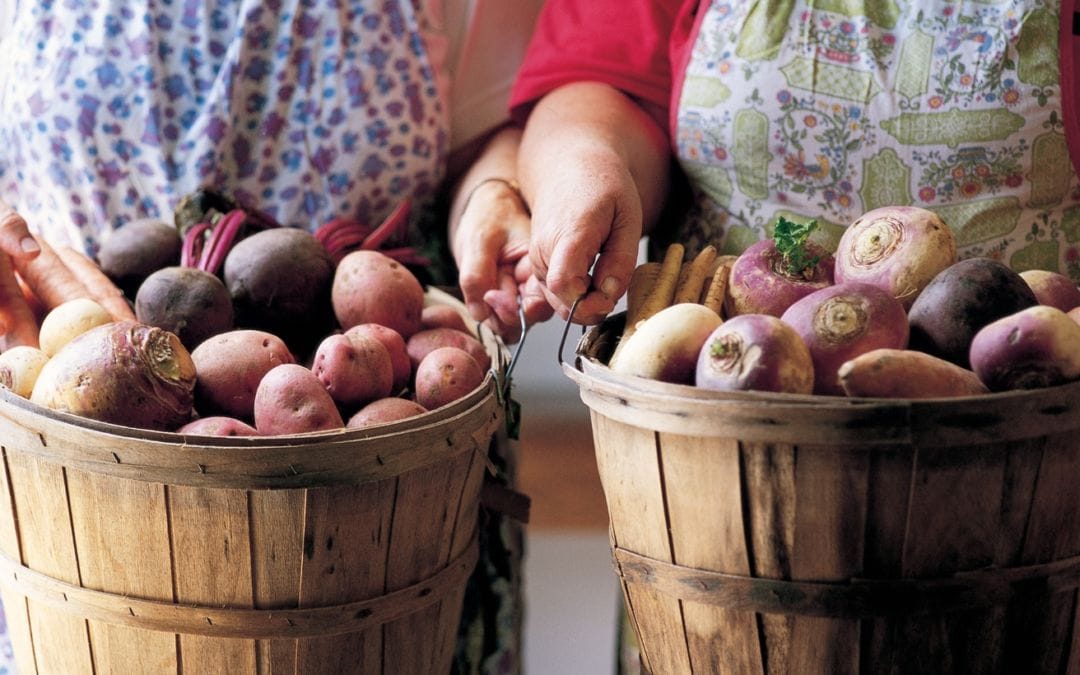 Grandma said to eat your root vegetables. And if she’d had these delightful recipes, you would have followed her advice.

This classic was featured in the October 2005 issue of Traverse, Northern Michigan’s Magazine. Subscribe to life Up North.

Autumn for Northwoods pioneers meant bringing in the root veggies: carrots, onions, turnips, rutabagas, beets, sweet potatoes and potatoes. Bits of soil still clinging to their skins, the hand-sized parcels of nourishment were stored in the family root cellar—a room named for the root vegetables it kept from freezing during the long Northern winters.

Beets and carrots were laid in a special pit in the corner of the earthen-floored room, then covered in clean sand to help prevent rot. Families hung strands of braided onions from the rafters, and heaped sweet potatoes, turnips and rutabagas in baskets and bins. Potatoes were packed in until not so much as an eye more would fit in the cellar. The overflow was buried in pits in the field and covered with straw or potato vines to prevent them from freezing. 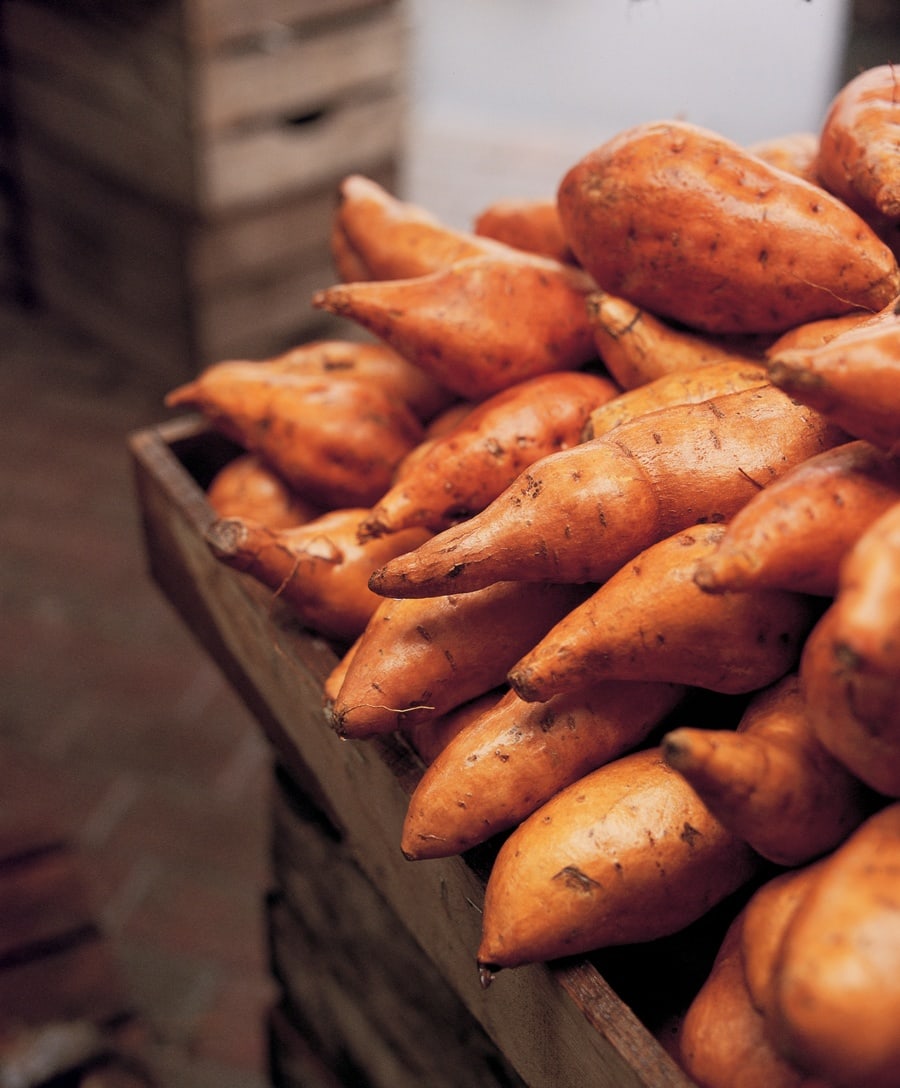 Potatoes were a cash crop on many Northern Michigan farms—so important that school was closed at the end of September and into October so kids could help with the back-tiring, hand-chafing harvest. The recess, known euphemistically as potato vacation, did have at least one memorable reward: freshly dug potatoes—sweet potatoes or regular white potatoes—roasted and eaten over a bonfire, right there in the field when the work was done. That treat aside, even children could appreciate a cellar full of insurance against a hungry winter. As the icy wind blew off lakes, through forests and over frozen fields, families sat down to bowls of steaming borscht, stews thick with parsnips and turnips, platters of pickled beets and the omnipresent tureen of mashed potatoes with dollops of fresh-churned butter melting in the middle.

“Our potatoes are splendid what we have dug of them. If it were not for them I guess we would starve.” Glen Arbor, 1869 (from The Boizard Letters, 1993) 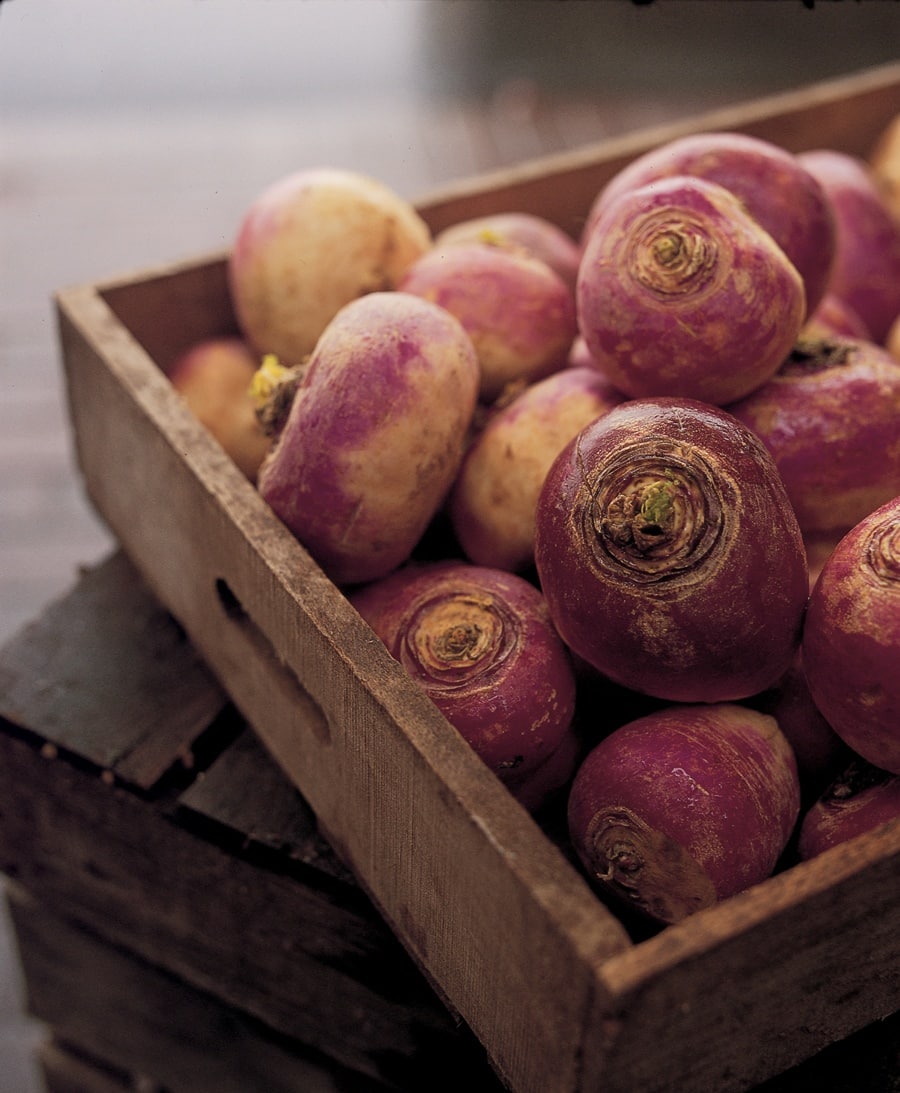 Truly, root veggies are the essence of comfort food. And perhaps that’s why we have grown too casual with them—relegated many of them to bland, secondary roles in our cuisine—if we remember to eat them at all. What a shame. Under the skin of every root vegetable lurks an exotic ingredient. The very fiber of civilization, root veggies hail from the furthest reaches of history and the world—the Middle East, the Roman Empire, pre-Columbian South America. Root veggies lend kick (think ginger, garlic and horseradish), color (beet-red and carrot-orange) and nutrition (they’re loaded with Vitamin A and potassium) to Grandma’s classics and inspired modern dishes. So head to the cellar or market and pull out your paring knife. These four recipes will send you back to your roots. 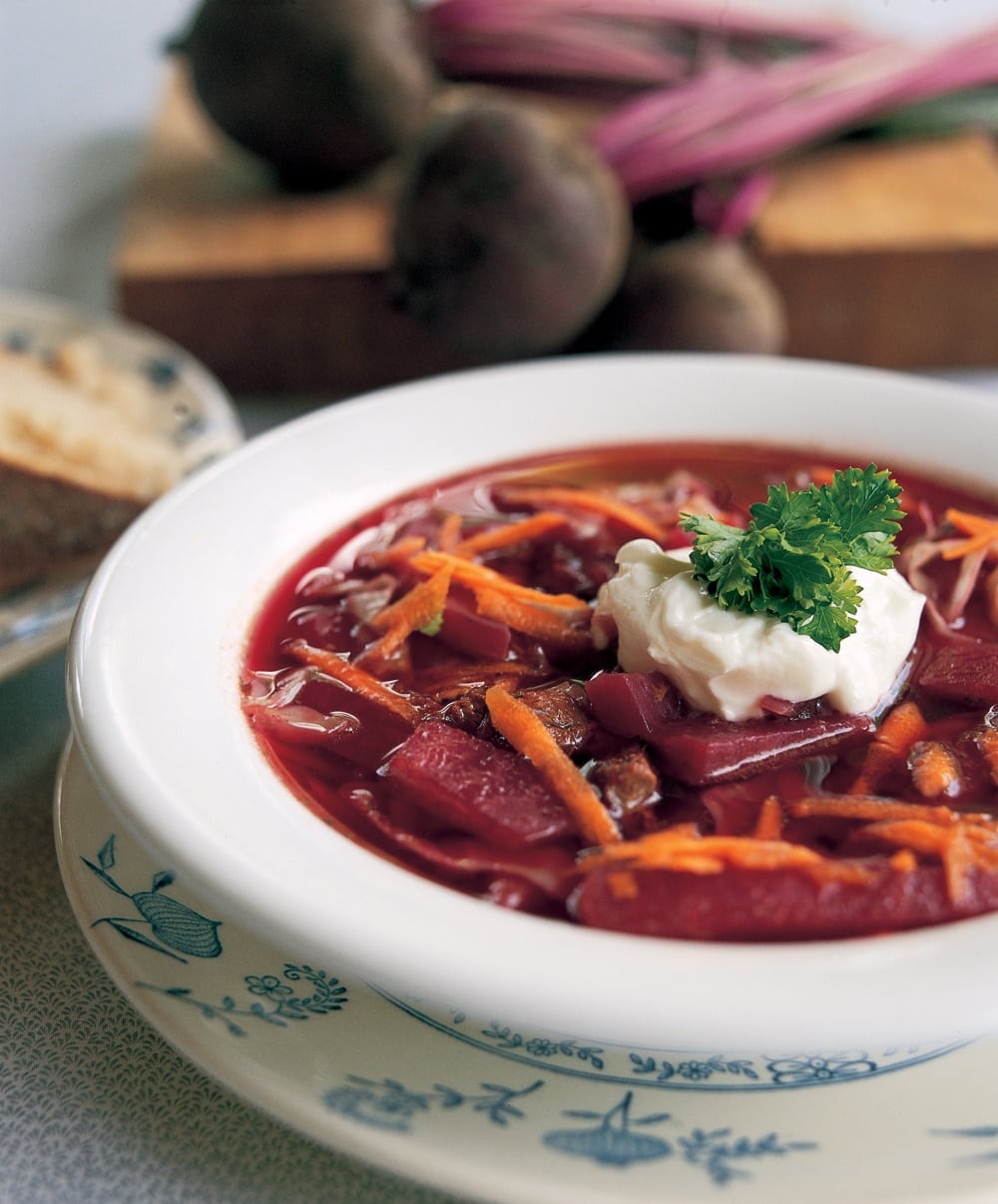 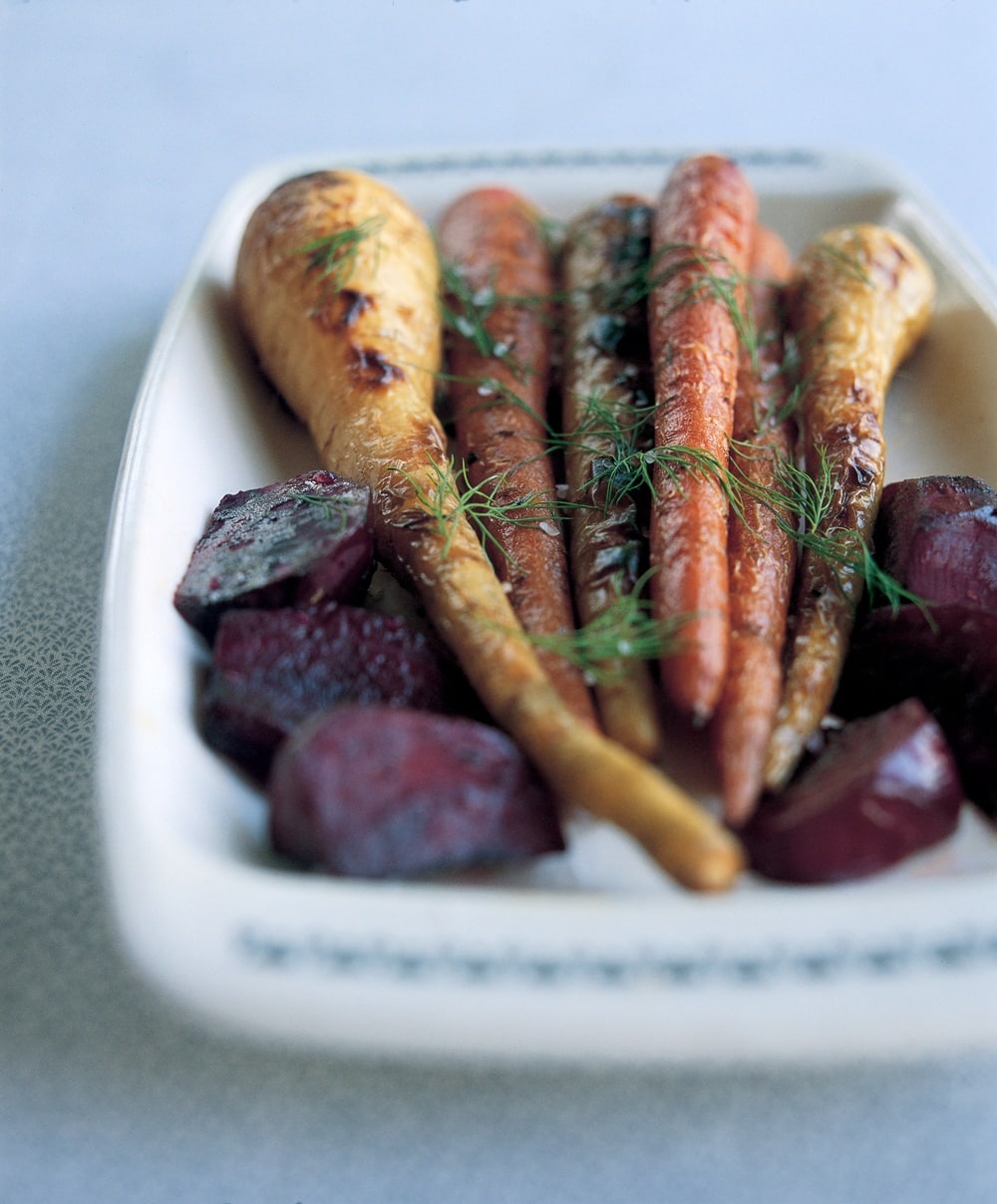 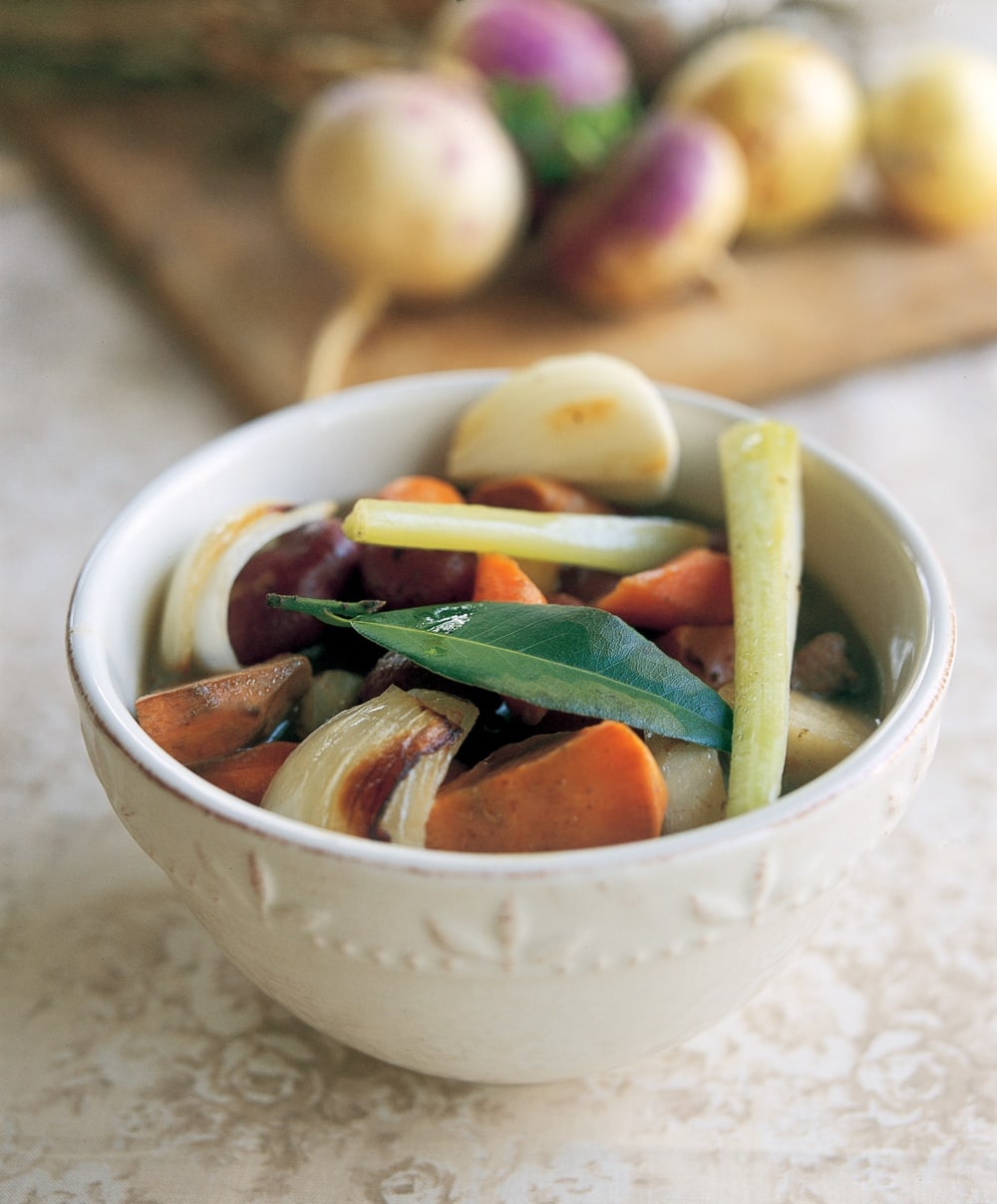 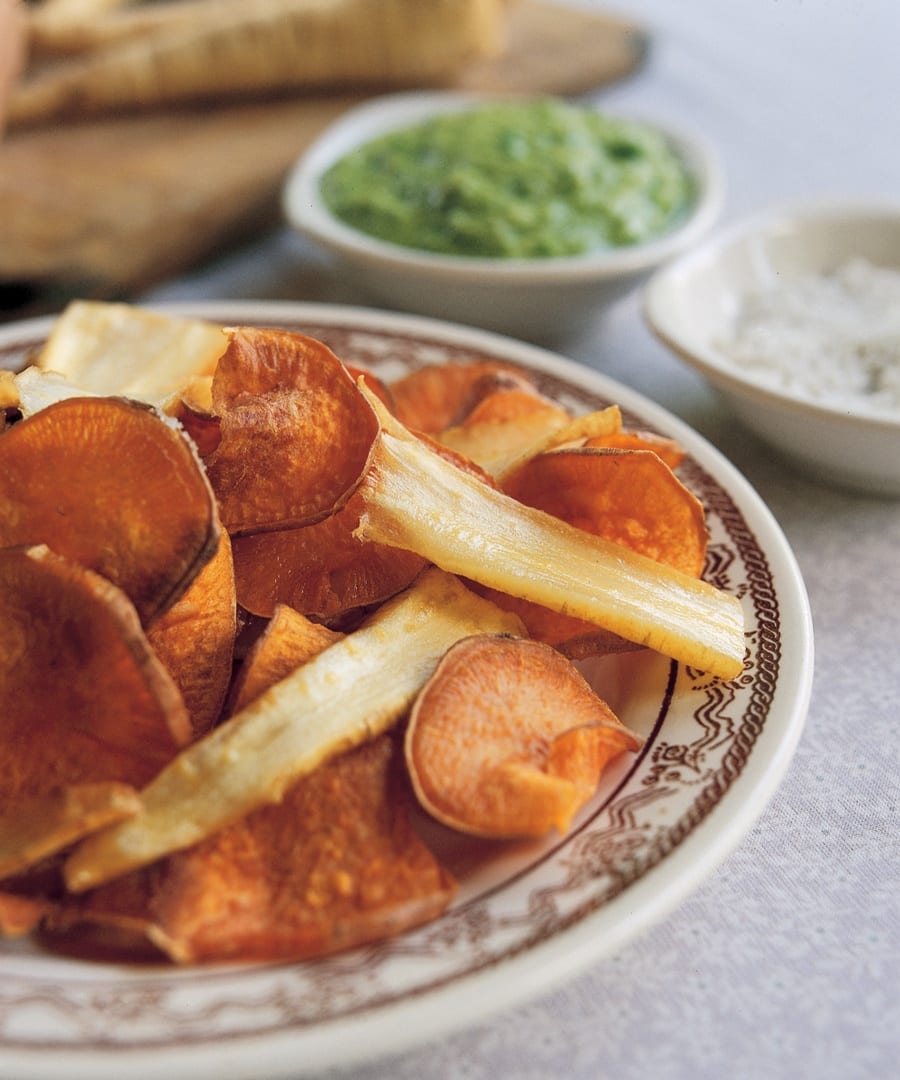 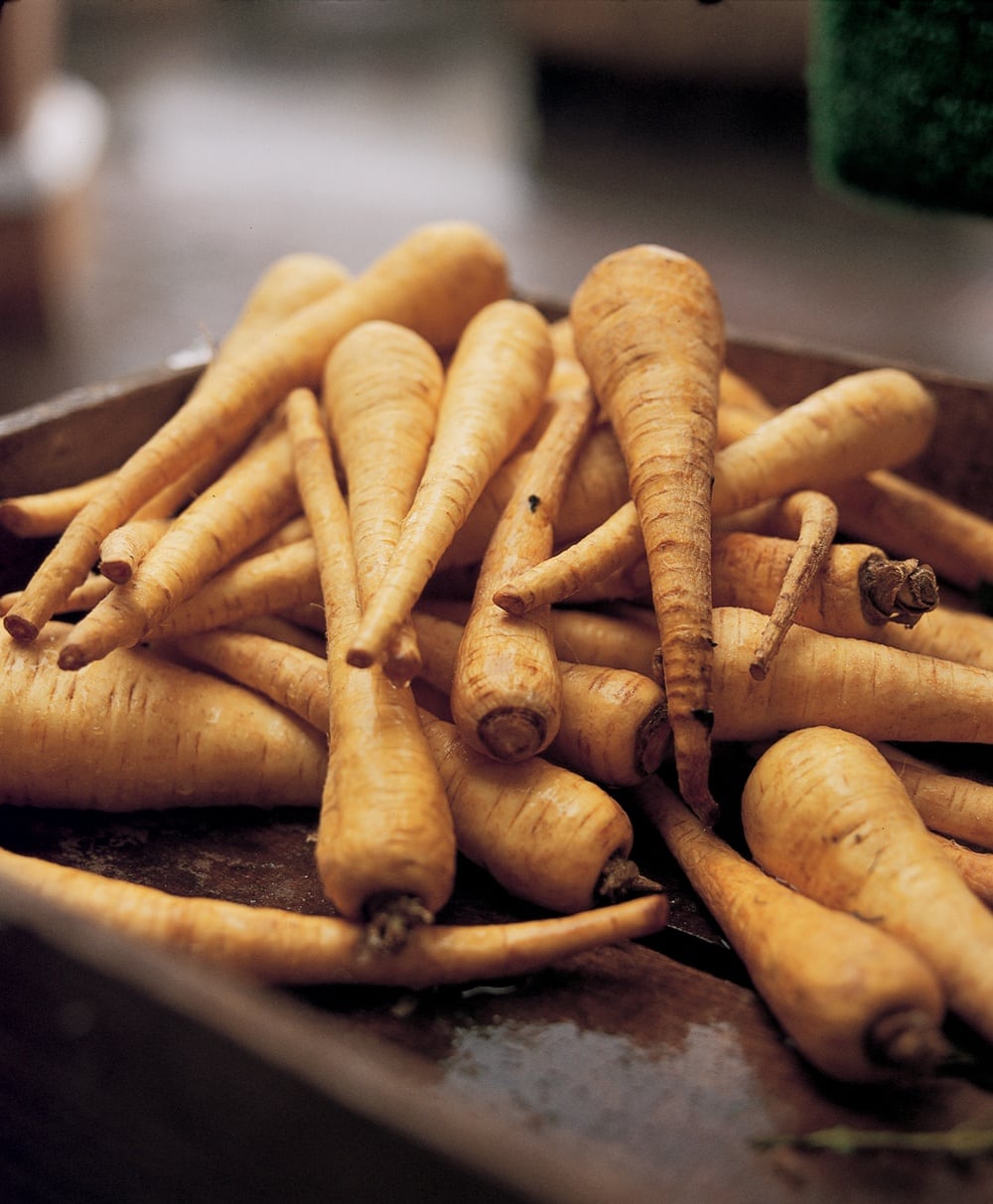 This pedestrian veggie began its history purple (check out seed catalogs or good produce sections to find carrots in their native skins). Cultivation turned carrots orange, but not before they’d enjoyed wild times used as agents of seduction.

This most luscious of the root veggies has floated around the great civilizations of the Mediterranean since 300 years or so B.C. But it wasn’t until the first Russian babushka got a hold of it that anyone was smart enough to turn it into borscht.

Because the potato grows underground, it is traditionally grouped with root vegetables—though technically potatoes are tubers, meaning that what we eat is the stem, not the root. Spanish conquistadors brought potatoes from Peru to Europe in about 1570.

Ah, the misunderstood sweet potato. No, it’s not a cousin to the potato. And it’s not even related to a yam. Though all three veggies originated in South America, sweet potatoes are the root of a member of the morning glory family.

These underrated vegetables lend the fresh taste of their cousin, parsley, to soups, stews and roasts. The Romans ate them, as did kings and queens in the Middle Ages. The potato forced the parsnip out of the limelight around the 17th century.

Across the pond in Europe, this most bulbous, fibrous of the root veggie clan is known somewhat over-glamorously as a Swede. While rutabagas have fans devoted to their acquired taste, others, starving pioneers among them, grew the veggie mostly as livestock feed.

Mankind has been eating this purple-skinned, peppery root vegetable since before learning to write. For both delicate flavor and texture, select turnips that are smaller than a tennis ball.