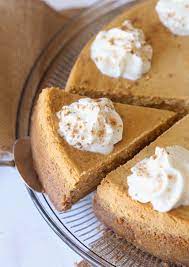 This pumpkin cheesecake offers a variation on the traditional pumpkin pie. Even those fiercely loyal to their pumpkin pie will veer from tradition with this silky, spicy cheesecake. It comes from Pauline Marmion, who gathers with her family in Kewadin. She says it’s a hybrid of two Gourmet magazine recipes with a few tweaks of her own, and that the flavors are even better after several days—so go ahead and cross this one off your holiday baking list first.

Preheat oven to 350°F. To make the crust, combine the crust ingredients in a bowl, and then press the mixture onto the bottom of a 10-inch spring-form pan. Freeze the crust for 15 minutes. To make the filling, whisk the pumpkin, eggs, cinnamon, nutmeg, ginger, salt and the brown sugar together well. In another bowl, with an electric mixer cream together the granulated sugar and the cream cheese. Beat in the cream, thecornstarch, and the vanilla. Beat in the pumpkin mixture. Pour the filling into the crust, and bake the cheesecake in the middle of the preheated oven for 45 to 60 minutes, or until the center is set. If it is not quite set after an hour, turn the oven off, crack the door open and leave the cheesecake to set for another several minutes. Let the cheesecake cool on a rack then chill it, covered loosely, overnight. Run a knife around the edge of the pan then remove the side of the pan. Serve at room temperature with the whipped cream and the toffee candy. (You can also sprinkle a little cinnamon sugar over the whipped cream.)