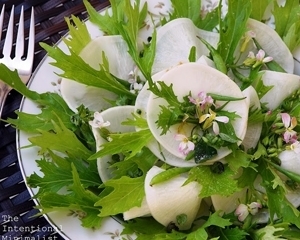 Learn more about cooking and eating locally at Kristin's blog The Intentional Minimalist.

Preheat oven to 350 degrees. Separate eight eggs to a large glass mixing bowl and mix with one eighth teaspoon sea salt and one eighth teaspoon pepper. Thinly slice one half cup fingerling potatoes. Thinly slice one half cup red onion. Chop one half cup cooked ham. Chop one half cup cheddar cheese. Remove one teaspoon thyme leaves from stems. Remove one cup mizuna leaves from stems. Warm one tablespoons olive oil in a large metal skillet over medium heat. Lay the potato slices on the bottom of the skillet with half of the thyme leaves and cook covered for three minutes. Flip potatoes and cook covered for one two minutes, then remove potatoes from skillet. Add half the onion slices in the skillet with one teaspoon olive oil and cook for one minute. Gently pour in egg whites and cook on medium heat uncovered for three minutes until the eggs begin to set. Layer on one half of the mizuna leaves, one half of the potatoes, one half the of the ham, one half of the cheese and cook covered in the oven for eight minutes. Remove frittata from oven and layer on the remaining mizuna leaves, red onion slices, potatoes, ham, cheese, thyme leaves and cook uncovered in the over for an additional five minutes. Remove frittata from oven and let rest for five minutes before serving with a sprinkle of sea salt.