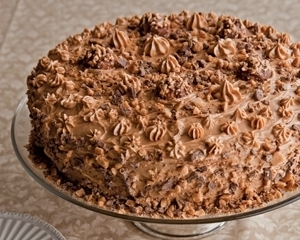 For cake: For meringue: For cream:

Cake: Separate eggs, retaining whites and yolks. With electric mixer, whip whites for 15 minutes then slowly add ¾ cup sugar while continuing to mix. Set aside. Add ¼ cup sugar to egg yolks and whip with electric mixer for 3 minutes. Continuing to mix yolks, add Y cup flour for approximately 3 minutes. Slowly add egg yolk mixture to egg whites, and beat with electric mixer medium speed for 2 minutes. Fold the batter into a parchment-covered standard round cake pan; bake at 370 degrees for 15-20 minutes. Remove from baking pan and cool on a clean dry towel, covering with a second clean towel helps to keep the moisture after cooling. Use long thin knife and cut in half horizontally to make two layers. Do this by cutting from the side of the cake and turning after each small cut. Keep the knife positioned in the middle of the cake as you continue to cut, turn, cut, turn, until you have two circular halves. Meringue: Beat egg whites for 10–15 minutes on medium-high speed. Beat until teaspoon can stand on its own in mixture. After the egg whites are stiff, add the 1 cup sugar very slowly, 1 tablespoon per 30 seconds of mixing. Add 1 cup chopped hazelnuts and sift the corn starch on top of the mixture. With a spatula or butter knife, use an up and down motion to mix the ingredients. It’s important to not break down the egg whites. Do not stir in a circular motion! Line a baking sheet with parchment paper. Carefully put meringue mixture on baking sheet so it is about 1 inch thick and the diameter of a standard dinner plate. Smooth with knife or spatula and bake at 325 degrees for 20 minutes on the lower level of the oven. After 20 minutes, lower the temperature to 300 degrees for 1 hour 40 minutes. Do not open the oven during baking! Remove from the oven and let cool on baking sheet. Cream: Combine egg yolks, sugar and milk in a double boiler over simmering water, whisking constantly until mixture thickens. Set aside to cool. With electric mixer on slow setting, begin to beat the softened butter while slowly adding the cooled cream mixture. Continuing to mix, add the cocoa powder and the Amaretto. To assemble the torte, the layer sequence from bottom to top is as follows: pastry, cream, meringue, cream, pastry, outer cream. Spread 25 percent of the cream on what will be the top of the lower pastry layer. Set meringue layer on top of the cream. Trim the meringue to match the shape of the pastry. Sprinkle meringue with toffee chips or chopped, roasted hazelnuts. On the bottom of what will be the top layer, spread 25 percent of the cream and set the layer, cream side down, atop the meringue layer. Spread the remaining cream over the outside of the torte. Sprinkle torte with either toffee chips or chopped toasted hazelnuts and finish decorating with Ferraro Rocher chocolates.