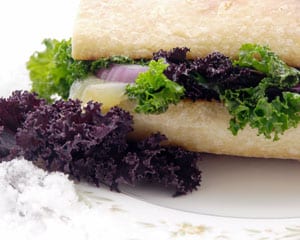 Learn more about eating and cooking locally on Kristin's blog, The Intentional Minimalist.

Remove one cup green bor kale and one cup red bor kale from stems and add to warm pan with one teaspoon green onion infused olive oil, sea salt and a pinch of smoked pepper. Cook kale for one minute, flip and cook for another minute then remove kale. Slice baguette into two sandwiches, cut in half and toast in pan with one teaspoon green onion infused olive oil. Slice one quarter cup onion, one half cup cheese and chop one quarter cup chives. Per sandwich, add one half cup kale to bottom bread, top with half the onions, half the cheese, half the chives, and another half cup kale. Spread one teaspoon horseradish (more if desired) on top baguette slice and place sandwich in warm pan with a plate of top for a few minutes until cheese is melted.