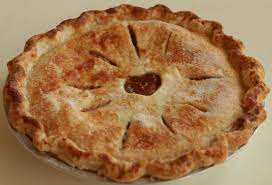 My grandparents Bert and Eva Haywood had a farm in Benzie County. When I was in 7th grade at Boardman School in Traverse City, I would often walk to the train depot after school on Friday and take the train to Bendon to spend the weekend with them. My grandfather would meet the train, picking up the mailbag for the post office. He would carry a lighted lantern, which was always comforting to me, as it would be dark outside by the time I arrived.

Mix the first three ingredients well, reserving the L cup of flour, until mixture looks like peas. Then add the milk. Mix again, and roll out on a floured surface to the size of your pie pan. Divide the mixture into two parts, one for the bottom crust and one for the top. Peel and slice the apples into fairly thick chunks, as it will bake up easily. Place in bottom piecrust. Cover with O cup of sugar and cinnamon, nutmeg and cloves. Sprinkle with L cup flour and butter. Place top crust. Seal the edges with dampened fingertips. Paint top with egg wash and sprinkle with sugar. Cut slits in top crust. Bake at 375 degrees for about 40 minutes.