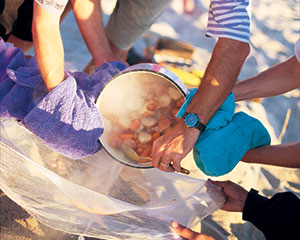 Northern Michigan Recipes: Have a fish boil on the beach and enjoy cooking over an open fire Northern Michigan recipes: Jack Cross, owner of Charlevoix’s John Cross Fisheries, faced plenty of tough times on Lake Michigan in the days when he fished for a living—storms, long hours, back-breaking work. But one thing was for sure, Cross never went hungry. When the men followed fish far from home port, they’d take a whitefish from the day’s catch and boil it up with potatoes, onions and salt—a simple, hearty meal known as a fish boil. “It sure tasted good when you were hungry,” he told Traverse Magazine in 2001.

Like everything else about fishing, Cross learned the art of the fish boil from his father, Johnnie Cross. But Johnnie would have been the first to tell you the humble recipe wasn’t his: It was just what fishermen did—the Great Lakes equivalent of a clambake.

If you’ve got a crowd of friends and family, a beach and a summer evening, you have most of what you need to host a traditional Great Lakes fish boil. June Cross, Jack’s wife, offers up the rest of the recipe below.

Fill a large pot with 2 gallons of water and 2 cups of kosher salt. Bring the water to a rolling boil, add the onion and carrots and cook until tender. Add the ginger, pepper, potatoes and garlic. Cook until the potatoes are tender. Add the whitefish and cook till done, about 8 minutes. Skim off the oil with a spoon or, if cooking outside over an open fire, build the flames to cause the scum to boil over. Plate with melted butter and lemon wedges; suggested sides are coleslaw, grilled corn on the cob and cherry pie. Serves one dozen people.