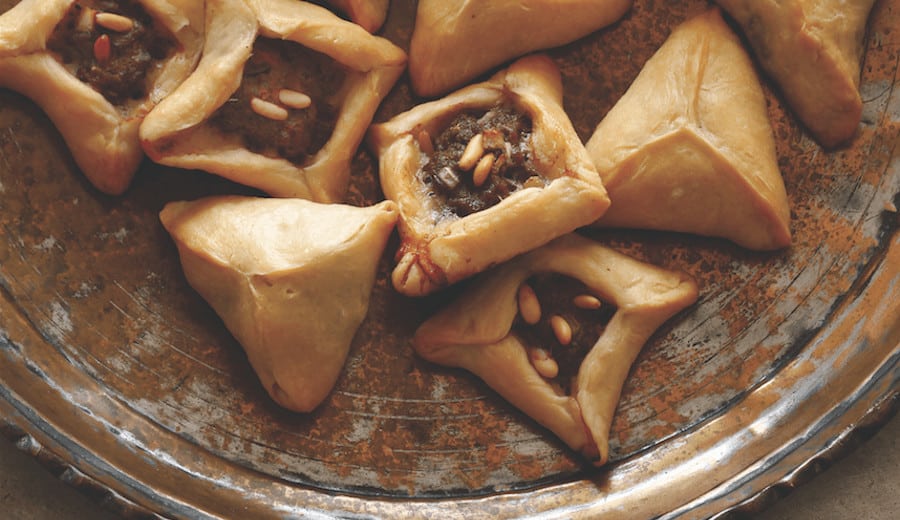 These succulent pies are similar to fatayar and made with the same dough, but these are open-faced squares. The sfeha meat can also be used to make fatayar-style triangles. Sfeha are best made with a little fat in the meat, so that the juices cook into the dough, flavoring it wonderfully. –Maureen Abood, author of Rose Water & Orange Blossoms: Fresh and Classic Recipes from my Lebanese Kitchen

Makes about 30 sfeha For the dough ...  Makes dough for about 30 hand pies

For the pie dough ... Proof the yeast by dissolving it in 1/4 cup of the warm water with the sugar. After about 10 minutes, the yeast will activate, becoming creamy and foamy. Whisk the flour with the salt in the bowl of an electric mixer or other medium bowl if you’re mixing by hand. Moisten the flour with the yeast mixture, 1/3 cup of the oil, and 1/2 cup of the warm water using the unattached dough hook from the mixer, or your hands. Attach the dough hook and mix the dough on medium speed, or by hand, slowly working in the remaining water, adding just enough to create a wet, sticky dough. Add more water a tablespoon at a time if needed. Knead the dough in the mixer for 3 minutes or by hand for 5 minutes, or until it is very soft and smooth. The dough should still be quite sticky at this point, but not so much that it leaves dough on your fingers when touched. Kneading by hand can be awkward at first because the dough is so wet, but as you knead, the dough will firm up and absorb much of the moisture. Sprinkle the dough with a little flour if that’s helpful as you knead it. Pour the remaining teaspoon of oil into a medium bowl. Shape the dough into a ball, and flip the dough around the bowl to coat it and the sides of the bowl with the oil. Cover the bowl with plastic wrap (without letting the wrap touch the dough), then with a clean kitchen towel, and place the bowl in a warm spot to rise; I like to use the oven. Turned off. Let the dough rise until doubled, about 60 to 90 minutes—avoid a rise much longer than this, or the dough becomes too spongy for the thin crust we’re after for the pies. Roll half of the dough on an unfloured work surface, rotating often, to about 15 inches across and 1/8-inch thick, keeping the remaining half covered in the bowl. Gently lift the center of the rolled dough, so the dough can contract before you cut out the rounds. Roll again and lift again. Cut the dough into 3 1⁄2-inch rounds, cutting the circles as close together as possible so that most of the dough is used up (a second roll-out is possible but the dough does not roll or bake up as nicely the second time around). Knead together the scraps, place them back in the bowl next to the remaining dough, and cover the bowl with plastic. At this point, you can use the dough circles as directed for any of the pie recipes, and you’ll roll out the remaining dough (roll the scrap dough separately from the unused dough) while the first batch is baking. For the filling ... Make the filling while the pie dough rises. In a medium mixing bowl, combine the meat, salt, yogurt, pomegranate molasses, cinnamon, allspice, onion, and pine nuts. Use your hands to combine the meat mixture gently without overworking it, which can make the meat tough. When the dough is ready, heat the oven to 400 degrees. Line two heavy rimmed sheet pans with foil and brush them each with 2 tablespoons of the olive oil. Using your fingers or a small spoon, place about a tablespoon of the meat filling in the center of each 3 1⁄2-inch circle that has been cut from the dough. Shape the meat pies by using your first finger and thumb of both hands to tightly pinch the dough together on opposite sides of the meat, and then again on the two opposing sides, to form a square around the meat. The sfeha look something like a hamentaschen cookie, but with four sides instead of three. Press the meat down a little bit to tuck it into the pastry, and continue to pinch the four corners and shape the squares to strengthen the corners for baking, bringing the dough right up next to and slightly over the meat. Continue shaping each of the pies, placing them on the lined sheet pans as you finish each one. Once a pan is filled with pies spaced about an inch apart, brush or dab each one, dough and meat, with more of the olive oil. Bake the sfeha for 12 to 15 minutes, or until they are light golden brown and the meat is cooked through. Make the second pan of pies while the first one bakes; repeat the process of rolling and cutting the dough with the other half, not including the scraps from the first roll out, as directed in the savory pie dough recipe. Knead the dough scraps and let them rest, covered, for a few minutes before rolling them all out together for a final batch. Fill and form the pies, coat them with oil, and bake as directed above. When the pies are done baking, sprinkle a few pomegranate seeds on each one and serve them immediately, or hold off on the pomegranate seeds until serving time if you’ll be reheating them. Store the pies in an airtight container in the refrigerator for three days, or freeze for several months. Reheat the sfeha directly from the refrigerator or freezer in a 350-degree oven.

All I Want for Christmas is a Chocolate Martini