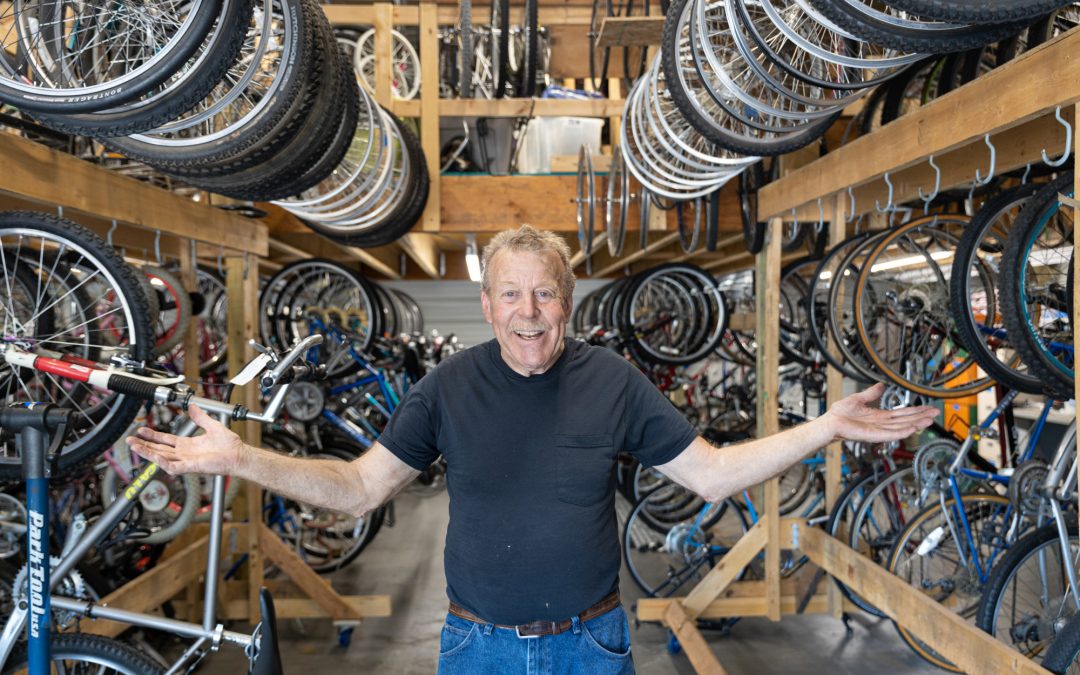 Don Cunkle has spent the last 16 years fixing bikes and changing lives, one gear at a time through the Recycle-a-Bicycle Program in partnership with TART Trails and Goodwill of Northern Michigan.

It was the idea that almost didn’t last.

In 2006, Don Cunkle, an avid mountain biker, had the idea of fixing up older bikes to donate to the Goodwill Inn in Traverse City. He asked the Cherry Capital Cycling Club to fund the idea, and they granted him $300. At the same time, a friend in Lansing who owned a bike shop wanted to get rid of some abandoned bikes. Cunkle took those in—13 in all—and repaired those, too. He started spending Saturdays going to garage sales and asking people to donate their bikes to his program.

His idea was taking shape—but there was a problem.

“I really didn’t feel like the program was making a difference,” he says. “It was time consuming, and I wasn’t getting much feedback. I actually dropped the idea for a while.”

“I asked, ‘Are you alright? Is there anything I can help you with?’ and she said, ‘I’m fine but I have a class today and I have to be back at the Transition House where I live at a certain time, and anyplace else I need to go seems too far away to walk to.’”

“I asked her if a bicycle would be helpful, and she excitedly told me it would be very helpful.”

Cunkle promised her he would fix one up and deliver it to the Women’s Resource Center (WRC).

It wasn’t until later, when he got a call from the WRC, that he realized the impact one bike could make.

“They told me she was in awe and in tears,” Cunkle says. “This lady said it changed her life, because she could get around and it boosted her morale. That affected me quite a bit—I knew I was helping people then.”

The WRC also told him that they had about 20 bikes in storage, all in disrepair.

“I spent a couple weekends in their parking lot getting those ready to go next,” he says.

In that first year, Cunkle repaired or donated 100 bikes in all, working out of his home shop.

“My second year, I repeated with another 100 bikes, and my backyard was looking like a bicycle scrapyard with two sheds filled with bike parts. My fence was lined with used bikes, and my garage was almost impassable,” Cunkle says. “I realized I needed to raise more funding as I needed special tools and real work stands, plus transportation funding.” 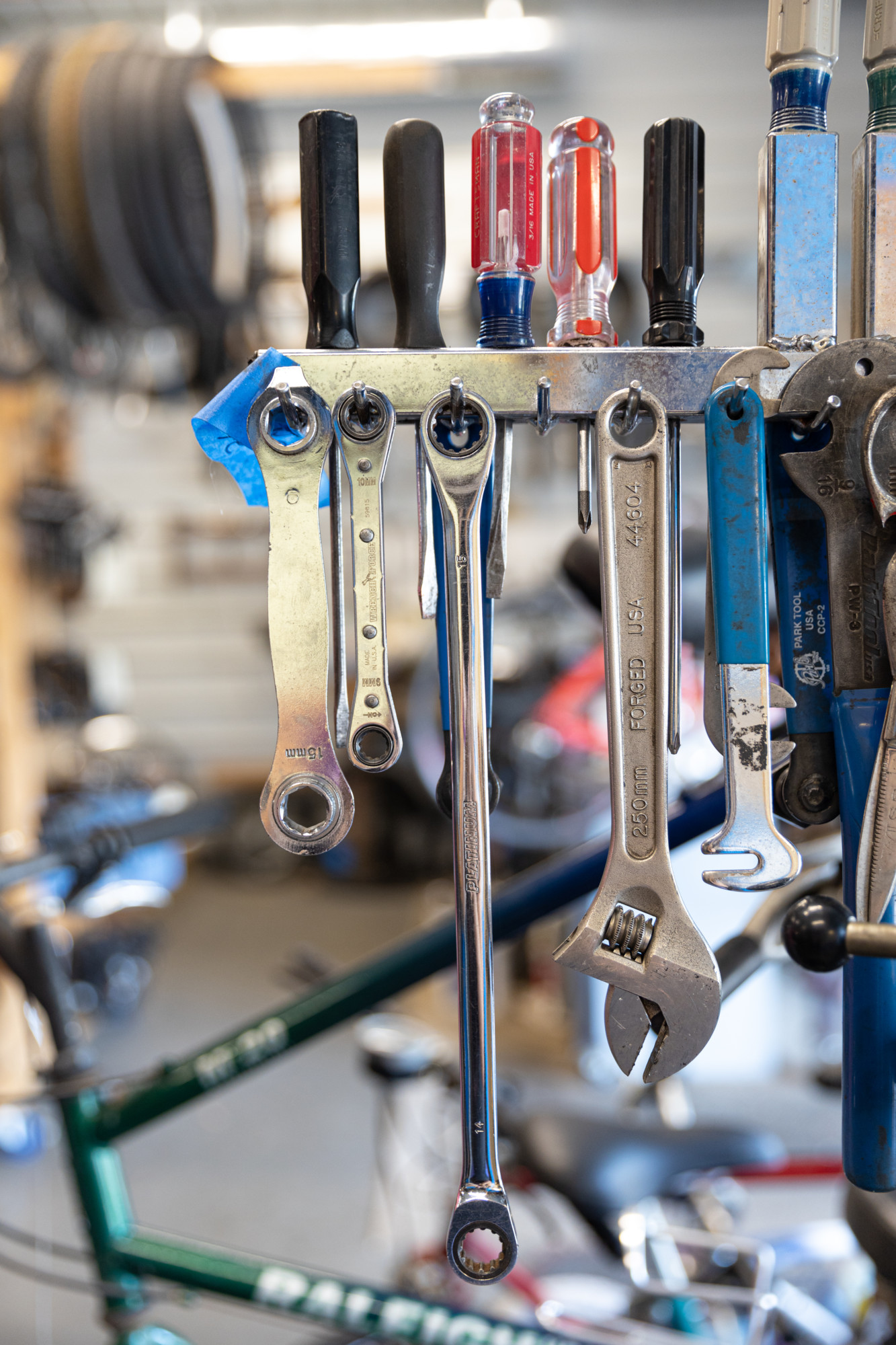 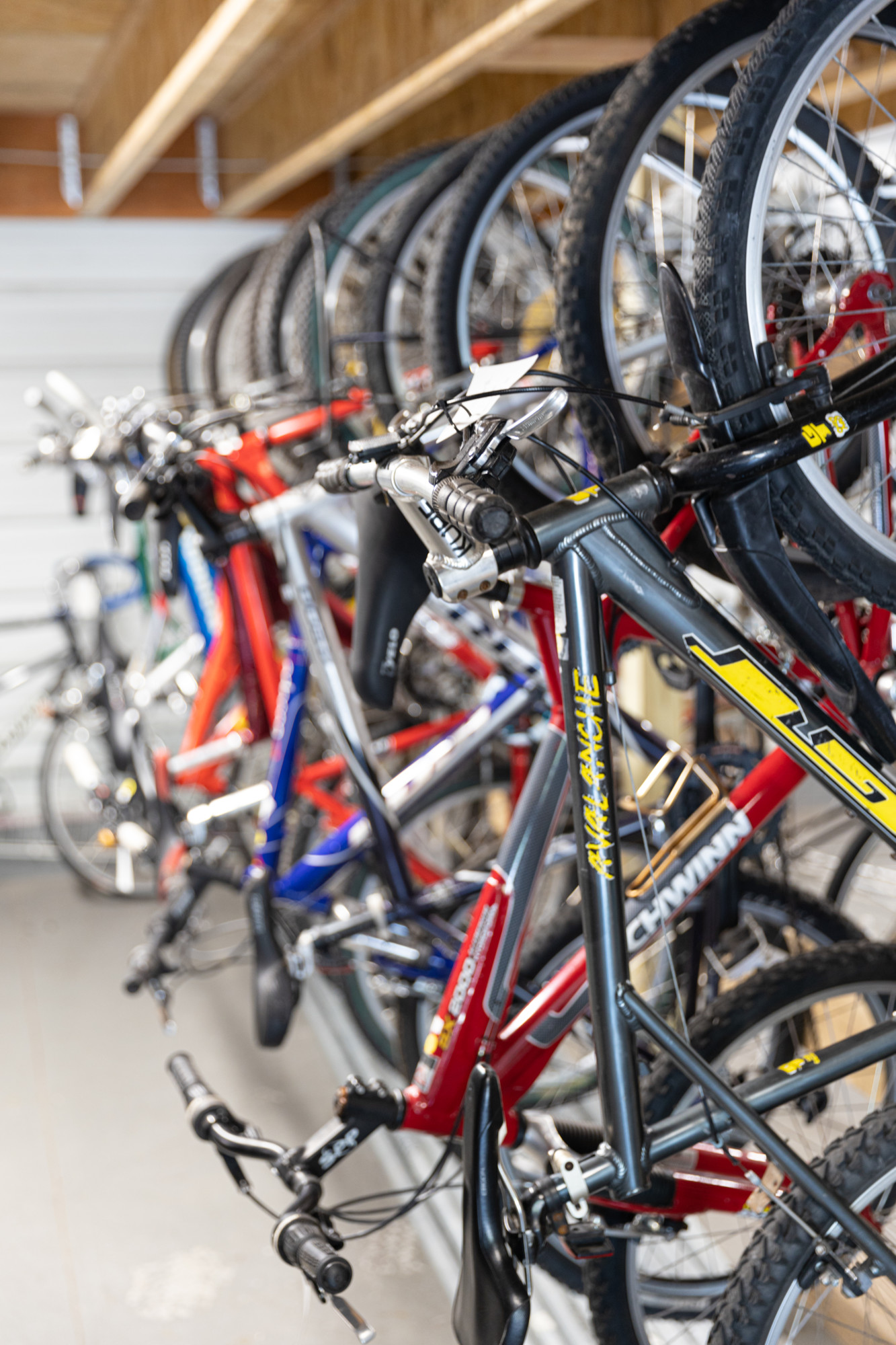 In 2010, Goodwill helped Cunkle write his first grant to help fund the program. Then, in 2011, he connected with the people at TART Trails.

“They told me they had been talking about my program, and invited me to come under TART, a nonprofit, so I would be able to write grants to keep it going.” It was an instant yes.

The Recycle-a-Bicycle Program (R-A-B) now gives away about 150 bikes and does approximately 50 free repairs a year. Bikes are donated to those in need based on a referral process.

“Any agency, organization, school, church, case manager or social agency can fill out a referral form for them,” Cunkle says. “If we have a bike available that works for them, they can come and pick it up.”

One client was referred because her car needed too many repairs. “We fitted her with a nice road bike that she really liked,” Cunkle says.

When she called several weeks later to say her bike had a flat tire, Cunkle drove out to retrieve it and bring it in for repair. She told him that she was more upset to be without her bike than her car.

“She said her car was a money pit with repairs and oil and gas costs, but the bicycle was pure joy and freedom and fun to ride.” Stories like this often start with old bikes just hanging in a
garage collecting dust.

“Most bikes we get donated to us are because people no longer ride them or their children have outgrown them,” he says. “People like to know that their bikes are going to do some good, rather than going to a dumpster or rotting in the garage.”

R-A-B, after starting in Cunkle’s workshop, is now on Woodmere Avenue in Traverse City, where volunteers do repairs. They also sell 60 to 80 used bikes a year, and the money is used to fund the program and the overhead of the building. R-A-B hosts a Bike Swap every June, where anyone can sell their bikes, and R-A-B receives 25 percent of the profits. The 2022 swap was a huge success: 50 volunteers logged 270-plus hours, selling more than 150 bikes and raising $12,000 for the program.

“It’s our biggest fundraiser and a great way to find a good used bike,” he says.

While the program itself has gone smoothly, Cunkle had to overcome a severe accident on a mountain bike three years ago. He broke his neck and suffered a traumatic brain injury.

“I was in a ‘halo’ for three months and then a neck brace for the rest of the year, and I was really glad to get back on my bike after such a long recuperation,” he says. “I’m 71 and my fitness isn’t what it used to be, but I still ride in the woods, always with friends for safety reasons. My wife Yvonne and I also enjoy riding bikes together.”

Cunkle says he continues to work on bikes both at home and at the Woodmere shop most days, but he hopes to pass on the program to someone else eventually.

“I’m going to be aging out in a couple of years,” he says. “I hope somebody picks this up and continues with it. It’s a good program and worthwhile.” 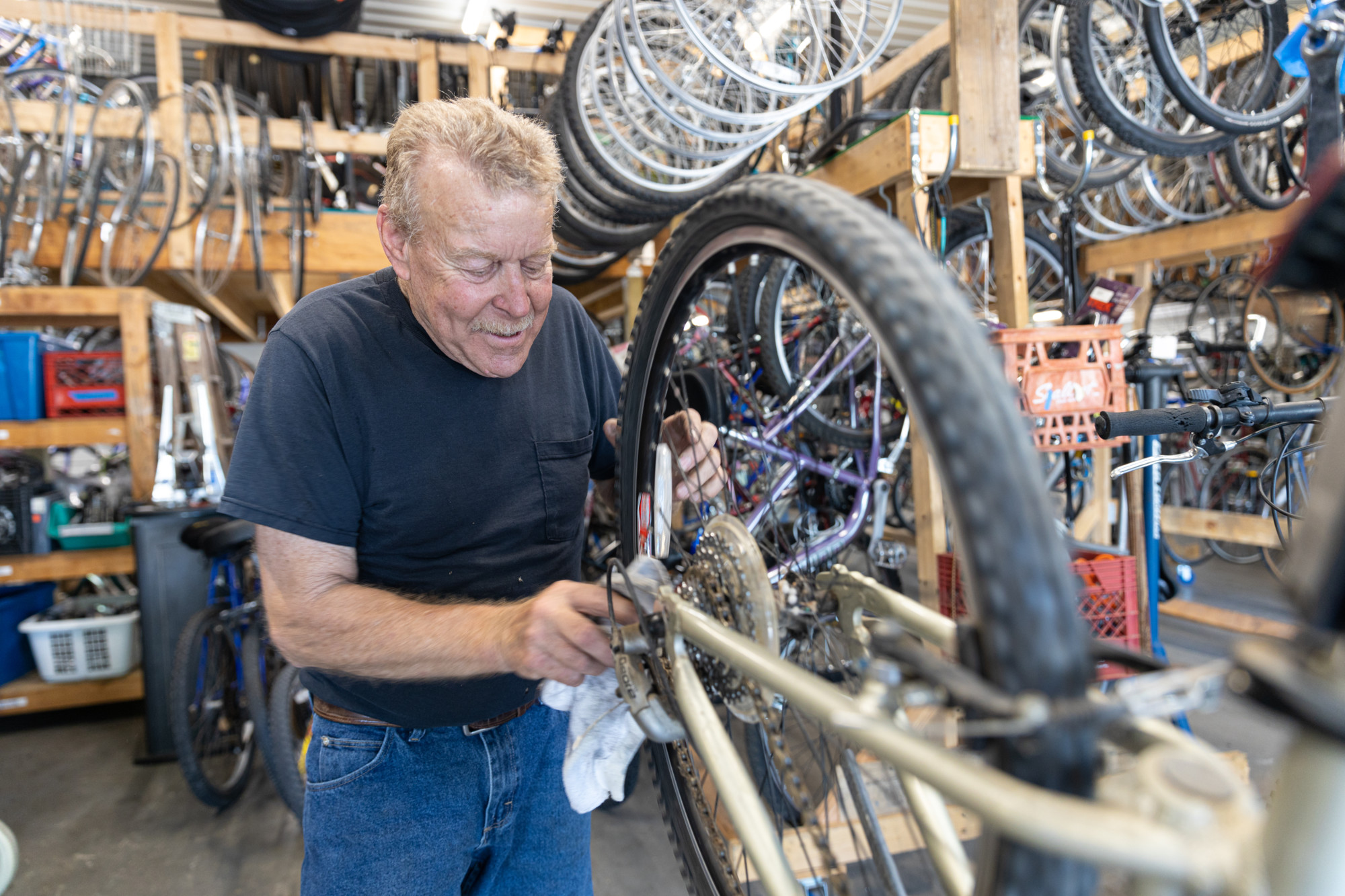 How to Get Involved

DONATE: Have a bike collecting dust in your garage? Bring it in to the Woodmere shop and donate it. Bikes are repaired or parted out to fix other bikes. 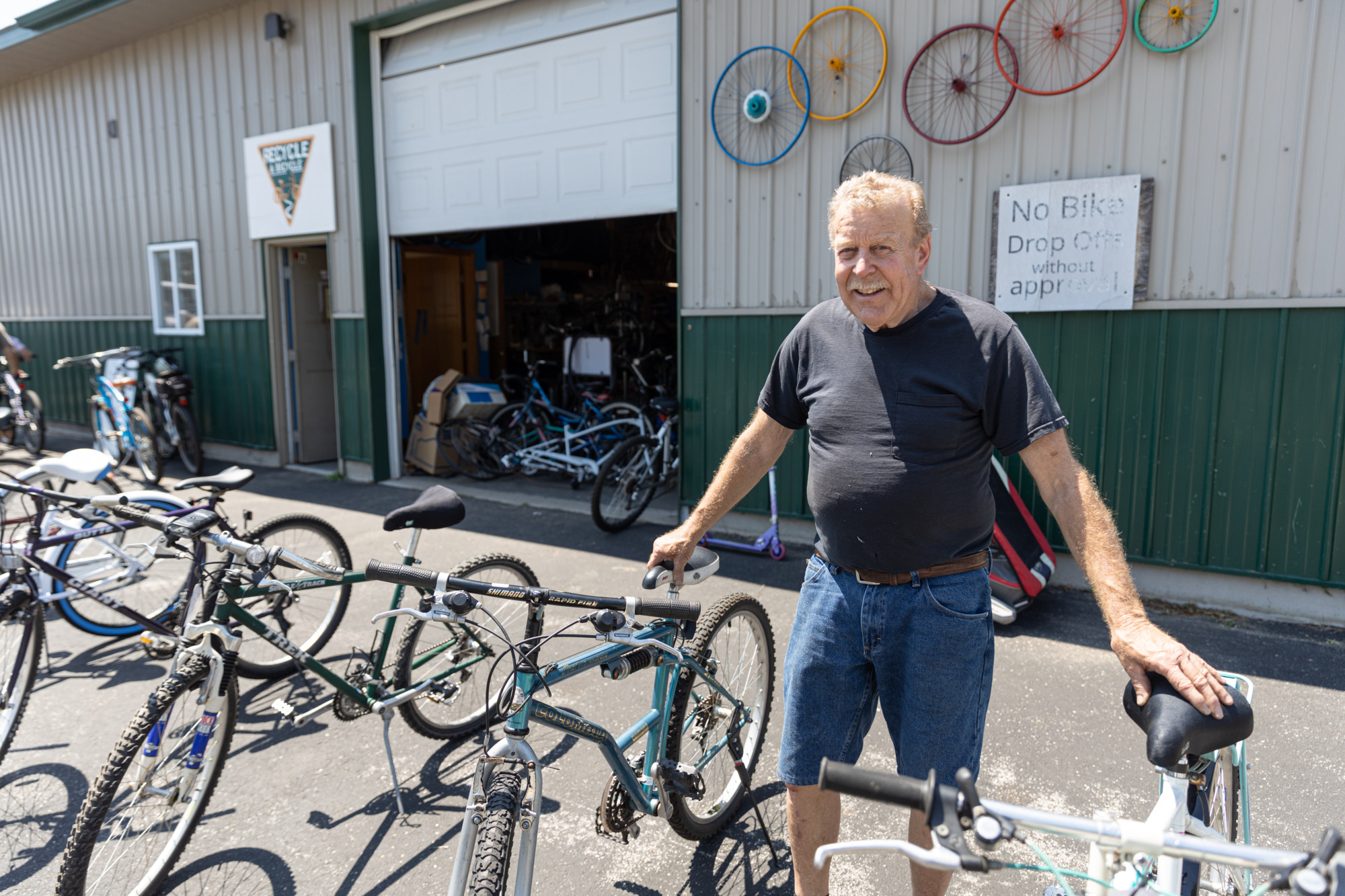 More from Biking in Northern Michigan