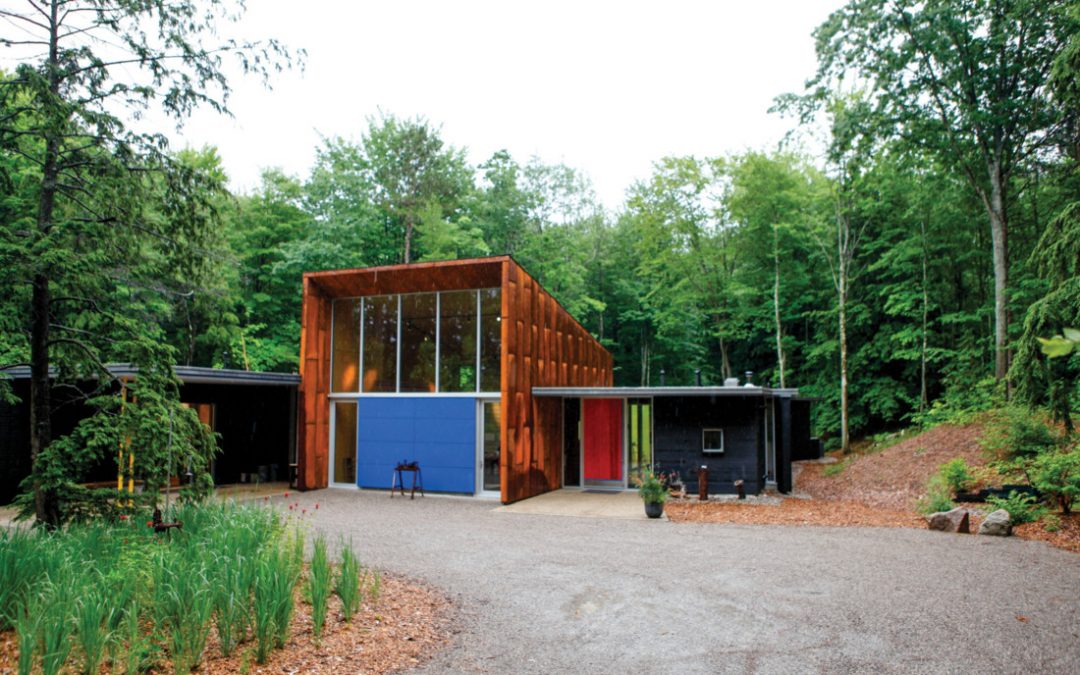 A Making Place | Artists around the world are talking about Tusen Takk Foundation’s Leland guest house and studios. Take a look inside of this rarefied place to create and see for yourself how artists are finding inspiration from the surrounding Leelanau County landscape.

Nestled among the forested sand dunes of Leelanau County and just out space as magical as the landscape that surrounds it. North of Leland and west of M-22, a series of dirt roads weave through the woods, enchanting in any season, leading to a place that altogether stands out among the landscape yet also feels right at home, in rhythm, with the woods that surround it.

Pops of yellow, blue and orange perform a playful beat on the exterior of a modern building that is otherwise cloaked in more natural tones. Marked on the front side by large windows, metal and wooden features, a rich-blue wall and a burnt-orange door, Tusen Takk’s guesthouse and studios offer a chance to exhale for artists from around the world.

Husband-and-wife duo Geoffrey Peckham and Patricia Melzer own Tusen Takk (which means “a thousand thanks” in Norwegian), the name they’ve given to their six acres of land. Today, the property is home to Tusen Takk’s main house, where Peckham and Melzer reside, as well as the guesthouse and studios that, through an artist- in-residence program, provide artists time to slow down and reflect in a place that is regenerative by nature.

Peckham and Melzer chose to call Leelanau County home due to these qualities. Roughly 35 years ago, the couple was living in Alpena, Michigan. Often, they would spend their weekends in Leelanau. “After all our travels—after three decades thinking about where we would like to settle—it was this side of the state of Michigan,” Peckham says. 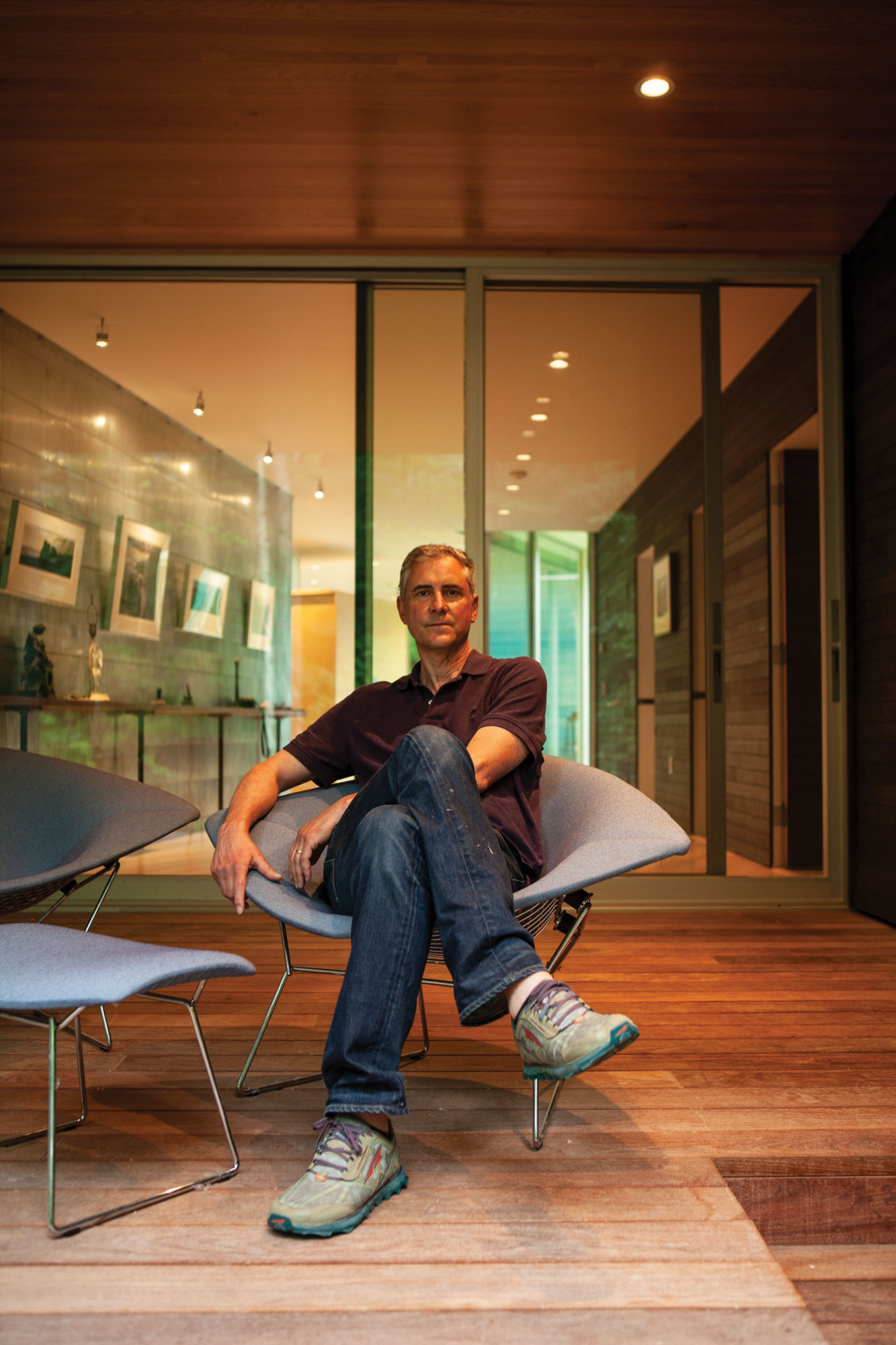 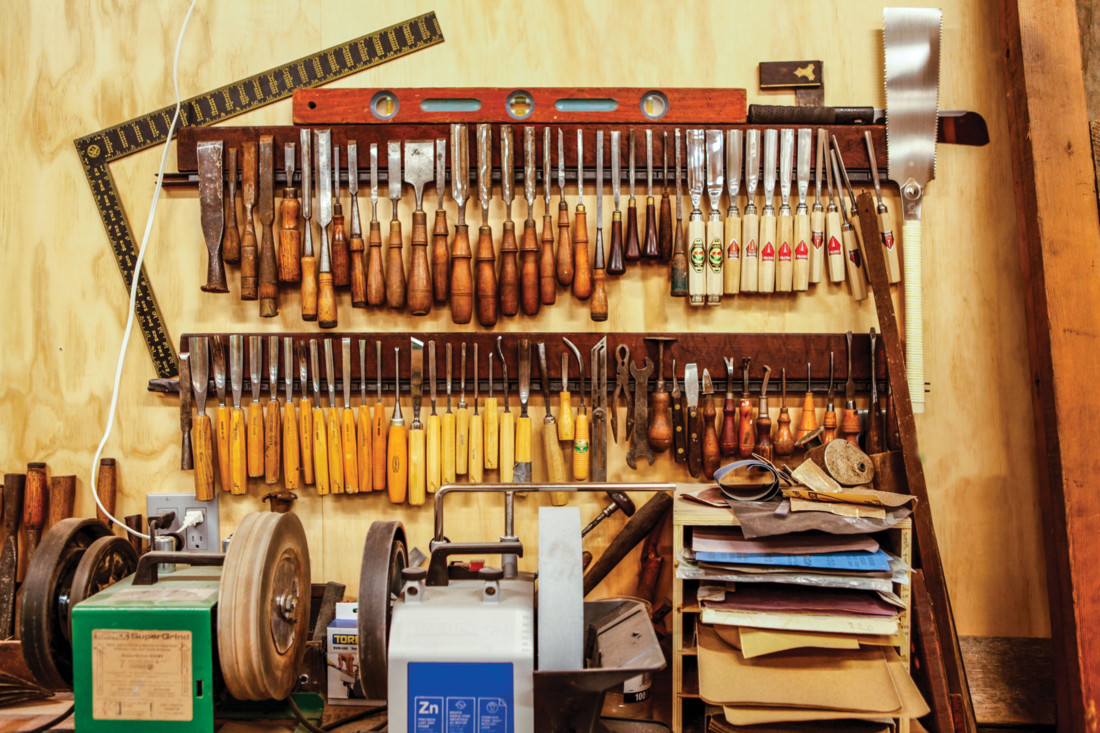 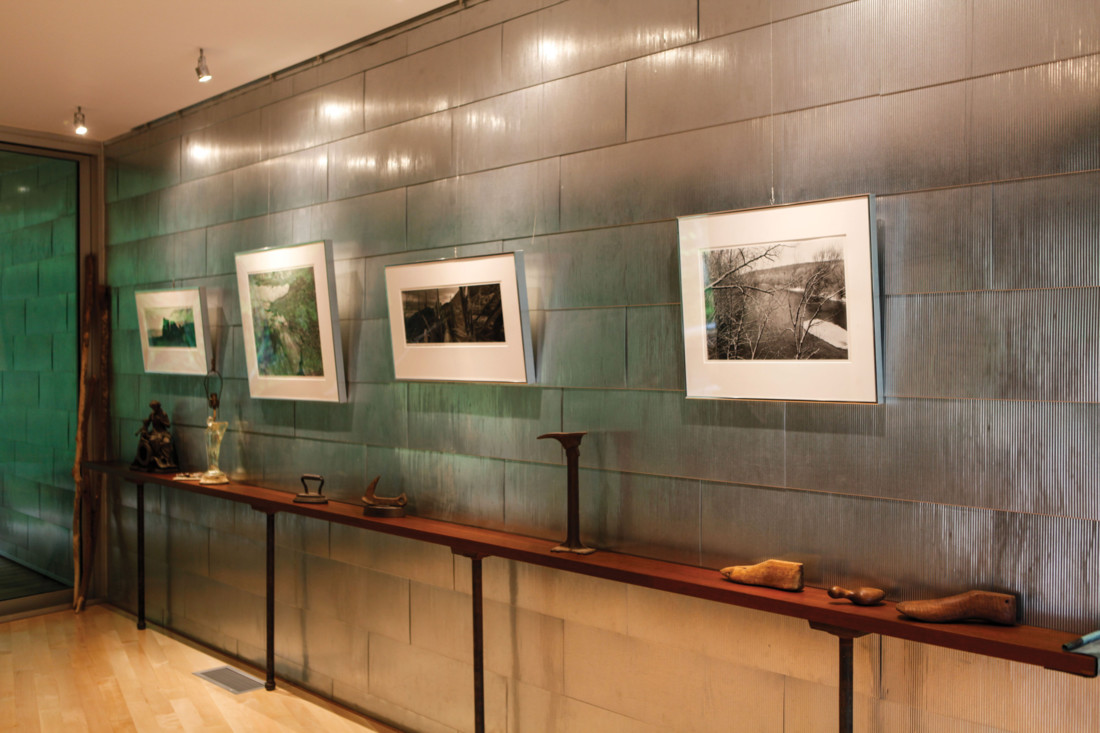 In 2013, once the couple had completed their home here, Peckham and Tom, one of their four children, began brainstorming what else might be possible on the land along Lake Michigan.

Both Peckham and Tom are artists. Peckham is a photographer, and Tom attended Parsons School of Design in New York and is a practicing artist in painting, photography, sculpture and jewelry design.

The family felt a calling to share their space with other people beyond their immediate circle. “It ties in with our belief that God is gracious and has given us this landscape that’s just so incredibly beautiful. To not share it seemed wrong, so here we are,” Peckham says.

Inspiration to create a retreat came in varied forms. The first was an open letter, titled “Toward Culture Care: Why the ArtPrize Helps Artists … and Why It Does Not,” by painter Makoto Fujimura in which he describes how artists need both the time and a place to create. Art-Prize, an independent international art competition in Grand Rapids, Michigan, is renowned for its $500,000 in cash prizes, but money, Fujimura writes, is only part of the equation: “The goal … should be to take care of artists so that they can grow and create better art, toward the flourishing of culture, rather than the bottom line of entrepreneurial economic success.” 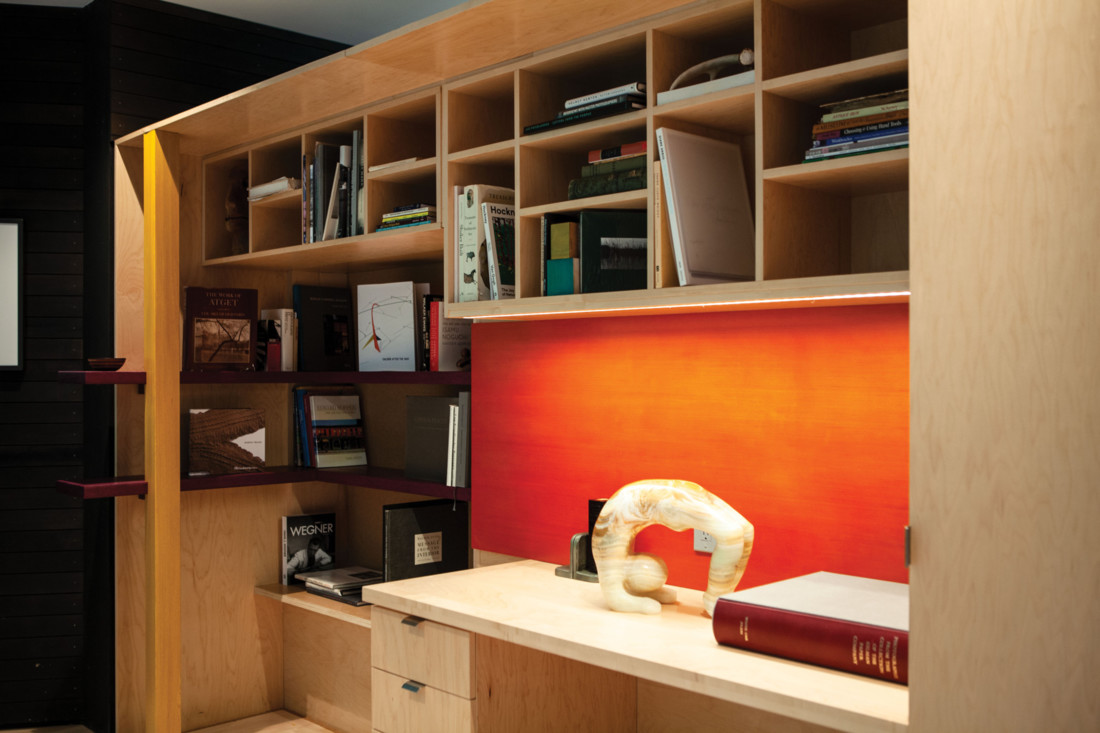 Intrigued, Peckham arranged a call with Fujimura. “He was gracious enough to talk to me about what he meant and about this idea that Tom and I had of creating an artist studio,” he recalls.

Peckham was also struck by Philip Graham Ryken’s book “Art for God’s Sake,” which makes a case for both the calling of Christian artists as a ministry and for Christians as supporters of the arts. “That answered a longing in my heart for combining my resources and my talents with my desire to serve God,” Peckham says. (The program does not require participating artists to share Christian beliefs.)

Peckham and Tom ultimately decided to build a guest-house and studios for artists in Leelanau County. Their hopes for the space were that it would be inspiring and functional; meet artists’ needs and serve them well; and that being at Tusen Takk would “help artists on their way.”

“Giving artists a time and a place to create seemed like the right calling for us in terms of giving a sense of worth and value to what it is that they bring to the world,” Peckham says. “That in itself is an incredible gift, so that’s why this whole place is named Tusen Takk. It’s a sense of gratitude.”

It’s this same sense of grace and gratitude that Peckham and Melzer wanted to express to artists, writers and composers for the transcendent truth and intangible joy they give back to the world through their work. The result of that desire is the Tusen Takk Foundation. Its mission: To nourish artists by giving them a place to work, engagement opportunities to enrich the culture of Northwest Michigan, and a platform through which they can share their work internationally. 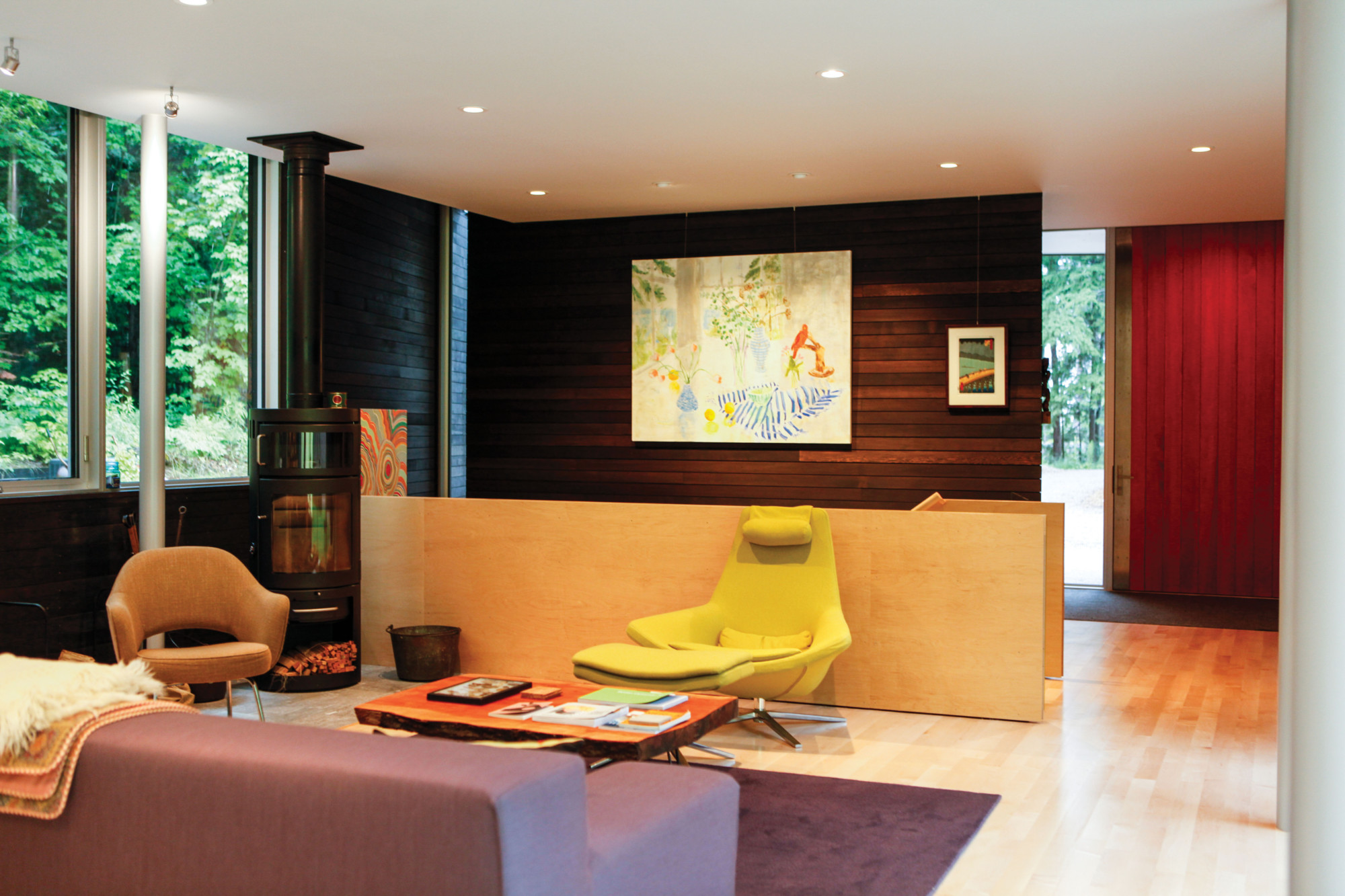 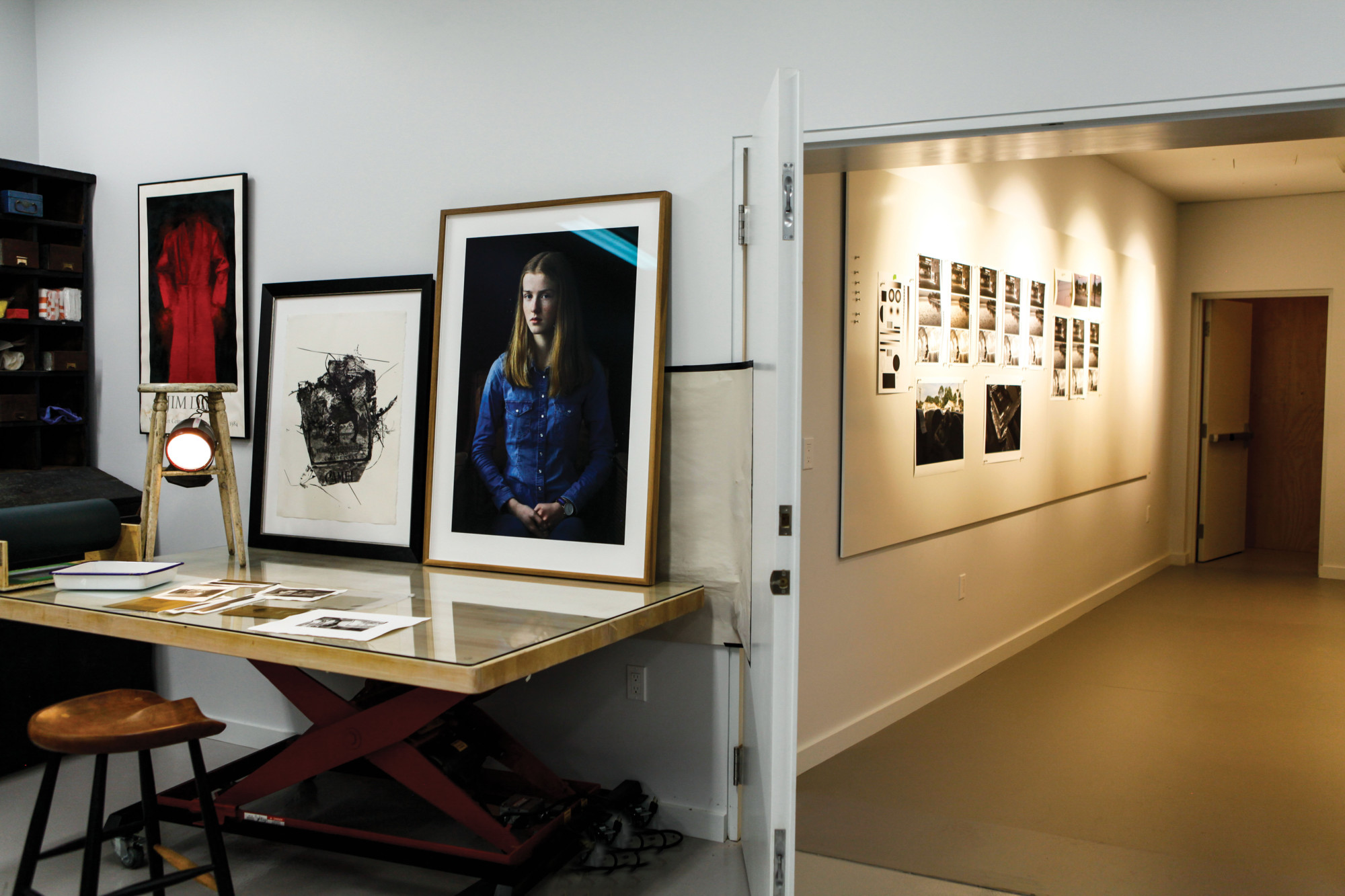 Peckham and Melzer’s home, Tusen Takk’s main house, was a collaborative creation between the couple and world-famous architect Peter Bohlin, whom Peckham first met and befriended in 2008. When Peckham and Tom decided to construct Tusen Takk’s guesthouse and studios for an artist-in-residence program, it only made sense that Bohlin was the first (and only) architect Peckham contacted.

“Peter’s architecture is friendly,” Peckham says. “There are obviously hard materials here and hard edges, but it’s soft. Peter is unique in the field of architecture. He’s recognized for designing buildings that people love to be in, see and explore. It is such a privilege to work with someone who has that caliber of friendliness in his character and [who] embeds that character … into places that he makes.”

The Peckham family and Bohlin’s goal was to craft a “making place” for Tusen Takk. The space they created is an experience, itself a piece of art with intentionality woven into every element, however seemingly big or small.

The modern aesthetic of the guesthouse is simple yet warm, with the living room and kitchen flowing in one large space full of windows and art. In contrast, the studios are a bit brighter, cooler, more utilitarian. The guest-house and studios celebrate the creation of human artists as well as that of Mother Nature. This space, which welcomed its first pilot artists-in-residence in 2020, coexists beautifully with the land around it. 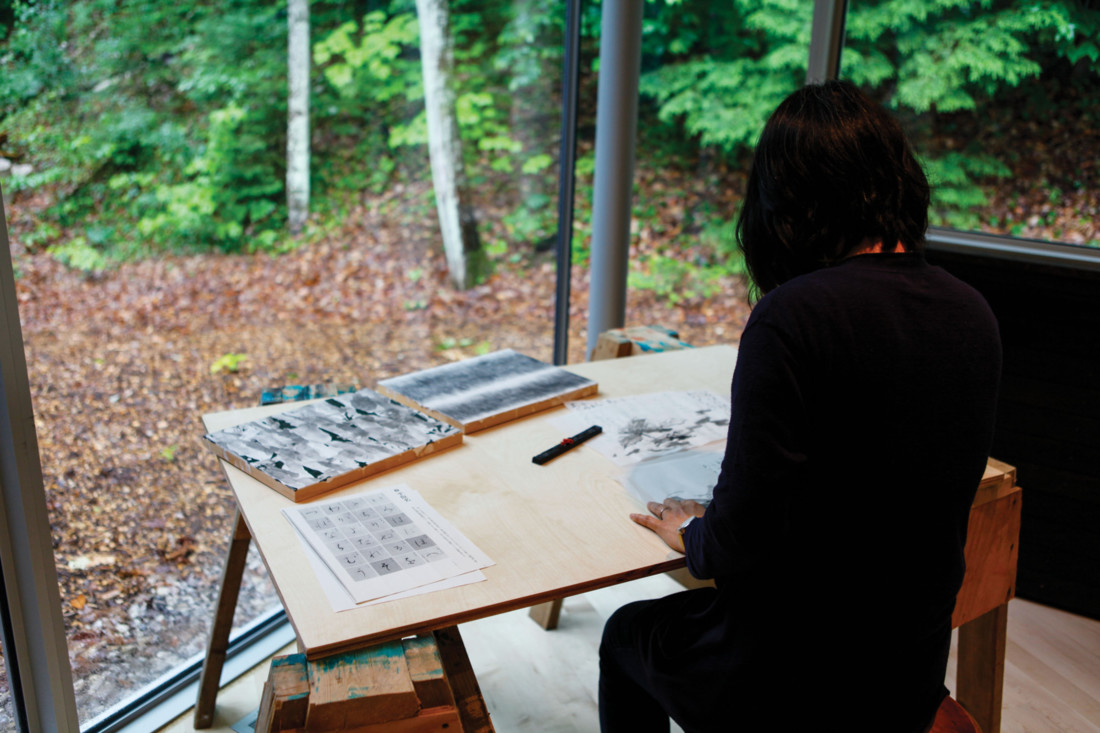 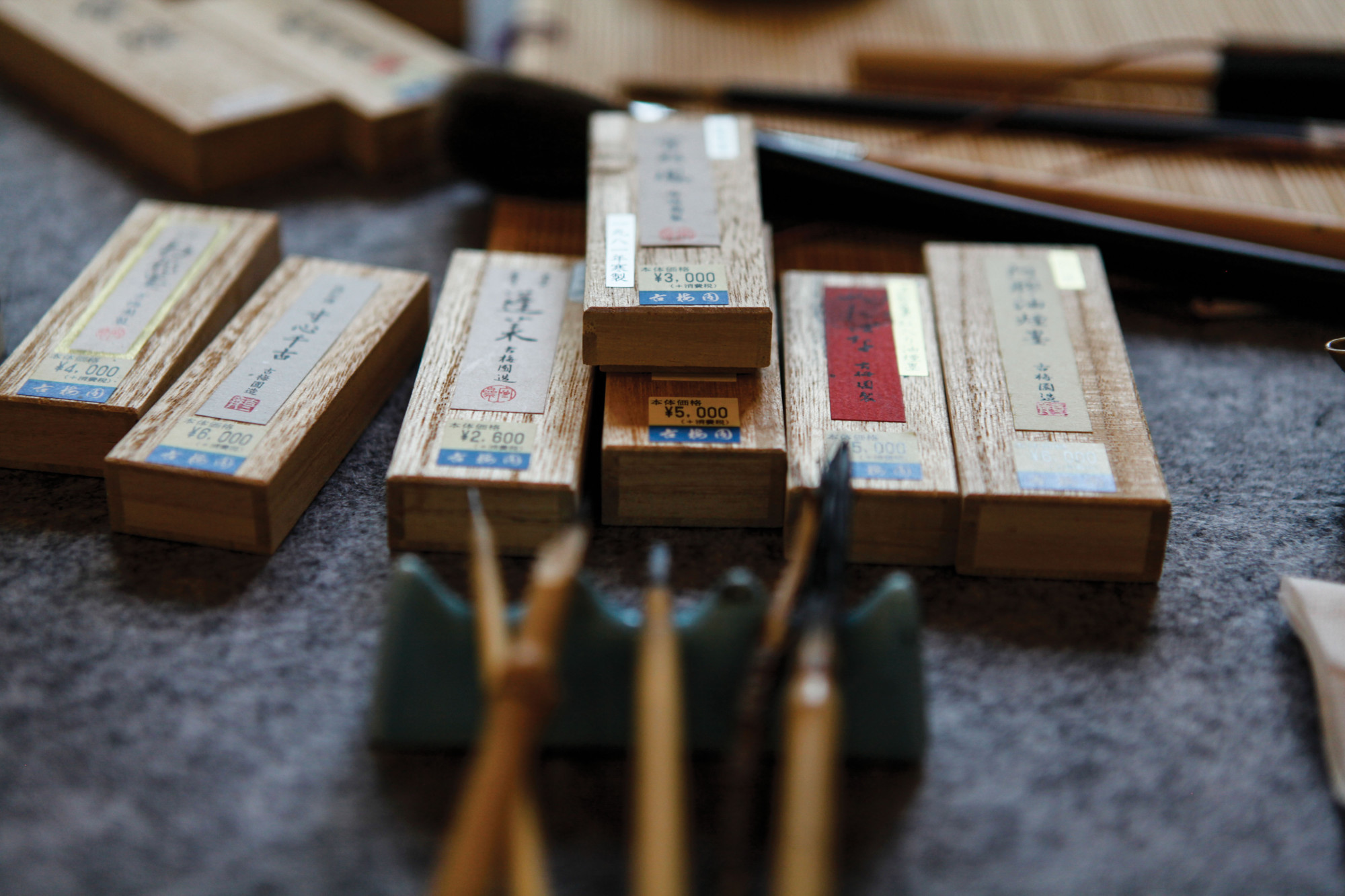 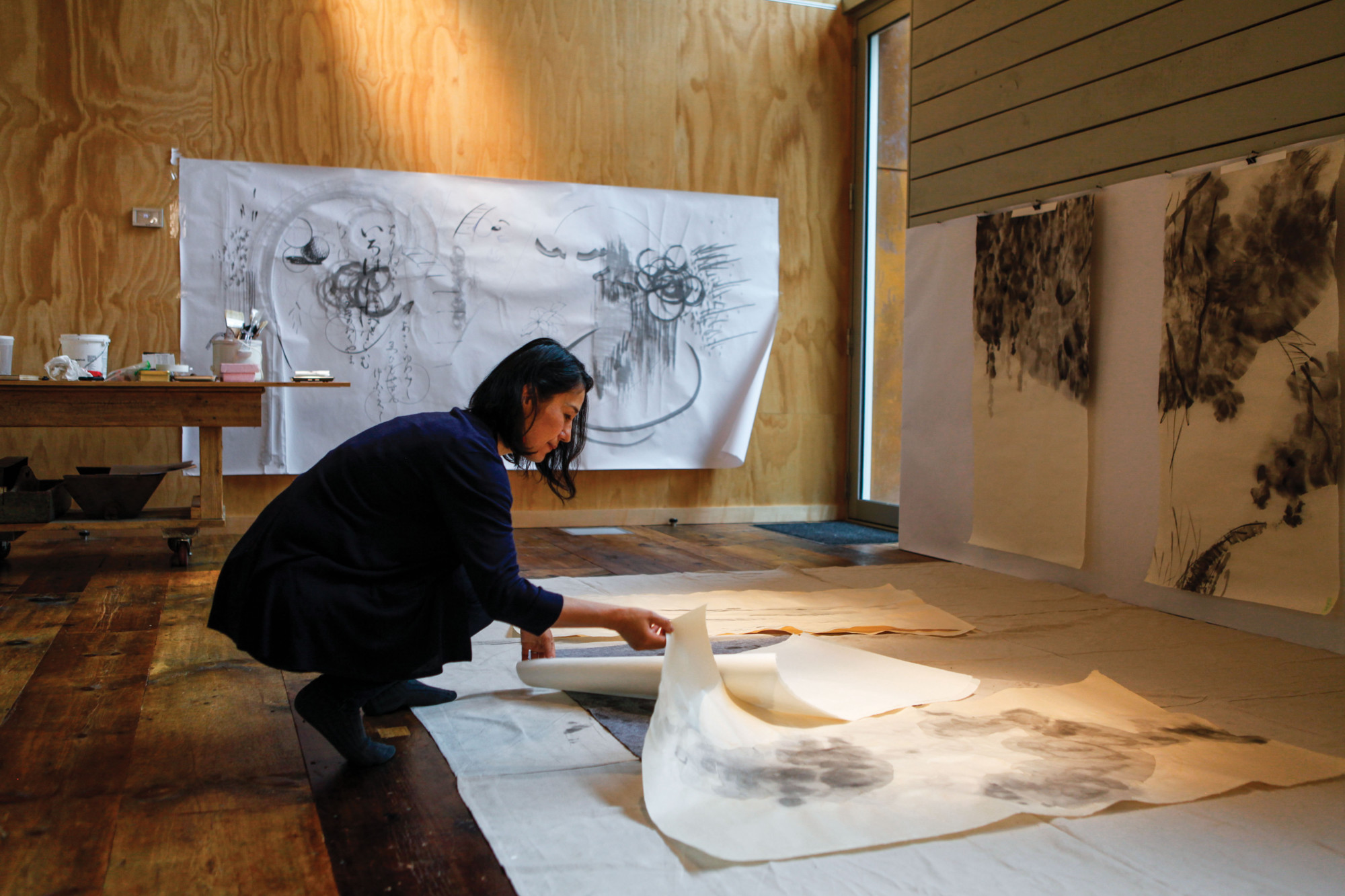 The black exterior of the guesthouse and studios draws inspiration from Scandinavian homes, allowing the space to “rest quietly” in the landscape. Two pieces of Corten steel line the garden and woods on the north side of the house. Their rusty appearance blends with the landscape in a soft, seemingly natural way. Floor-to-ceiling windows throughout the house pull the surrounding landscape into the living room, kitchen, library and bedrooms.

Within Tusen Takk’s various rooms, you are often floating in an infinite space with infinite possibilities. The guesthouse and studios provide a sacred space from which to escape everyday life and draw a breath of fresh air—and artistic inspiration.

But perhaps one of the most important aspects of the environment is the setting on the shore of Lake Michigan, which is within earshot of the guesthouse and studios and a two-minute walk away for the artists in residence.

“It’s this huge body of fresh water that seems infinite in its dimension and that changes every hour of every day,” Peckham says. “It can be incredibly powerful, and the artists get to experience that. I think it gives you this sense of awe and creation.” 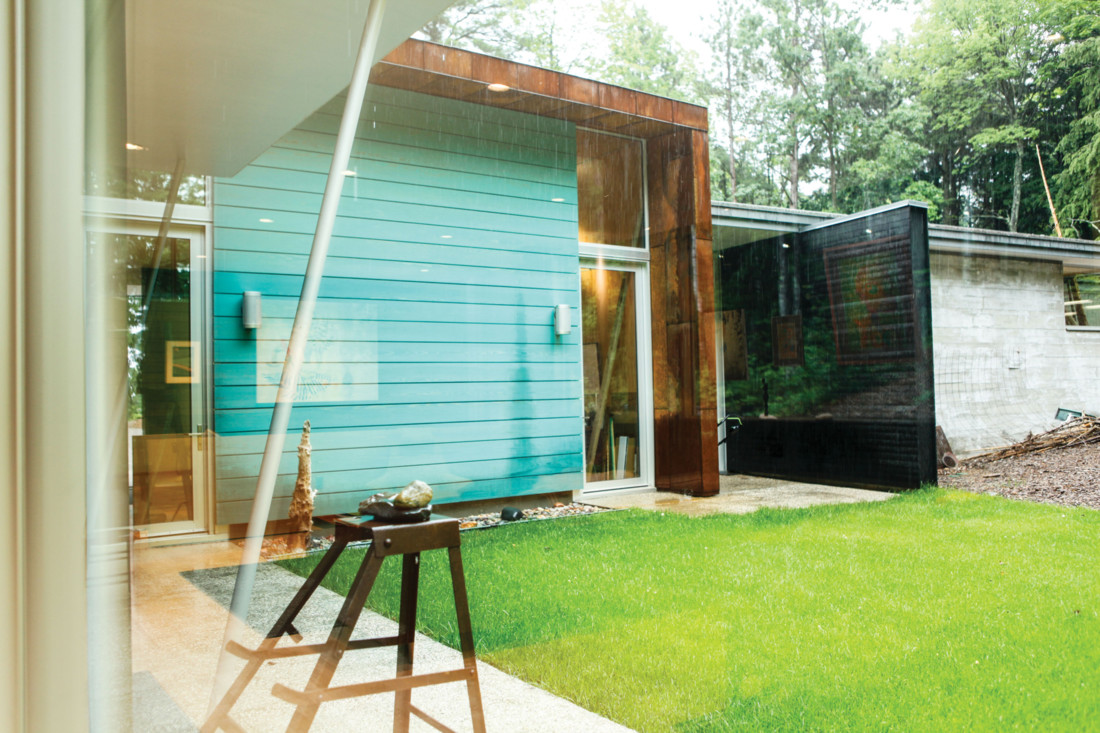 The landscape surrounding Tusen Takk has the power to inspire—and, at times, even provides the raw materials for the artists to create.

Nishiki Sugawara-Beda, a Japanese American visual artist based in abstract painting, was Tusen Takk Foundation’s artist-in-residence in July and August 2021. During that time, she experimented in her process of producing sumi ink, the traditional East Asian medium she often works with.

Sugawara-Beda travels to various places to burn organic materials to produce soot that she then uses to form abstract landscape paintings. She says, “Both the act of producing soot and the very materials allow me to be in touch with a specific land, which then allows me to have narratives in my painting.”

She tested several sumi-making processes and techniques at Tusen Takk, using materials from the environment around her. To create the ink, she harvested creosote from Tusen Takk’s chimney and also burned local red pine, white pine and cedar to collect the soot. She then used the ink in her series KuroKuro-Shiro (“black-black-white”), in which she seeks to capture and interpret the essence of the land around Tusen Takk.

Sugawara-Beda immersed herself in the landscape of Northern Michigan and says her favorite part of Tusen Takk’s property varied depending on the time of day. 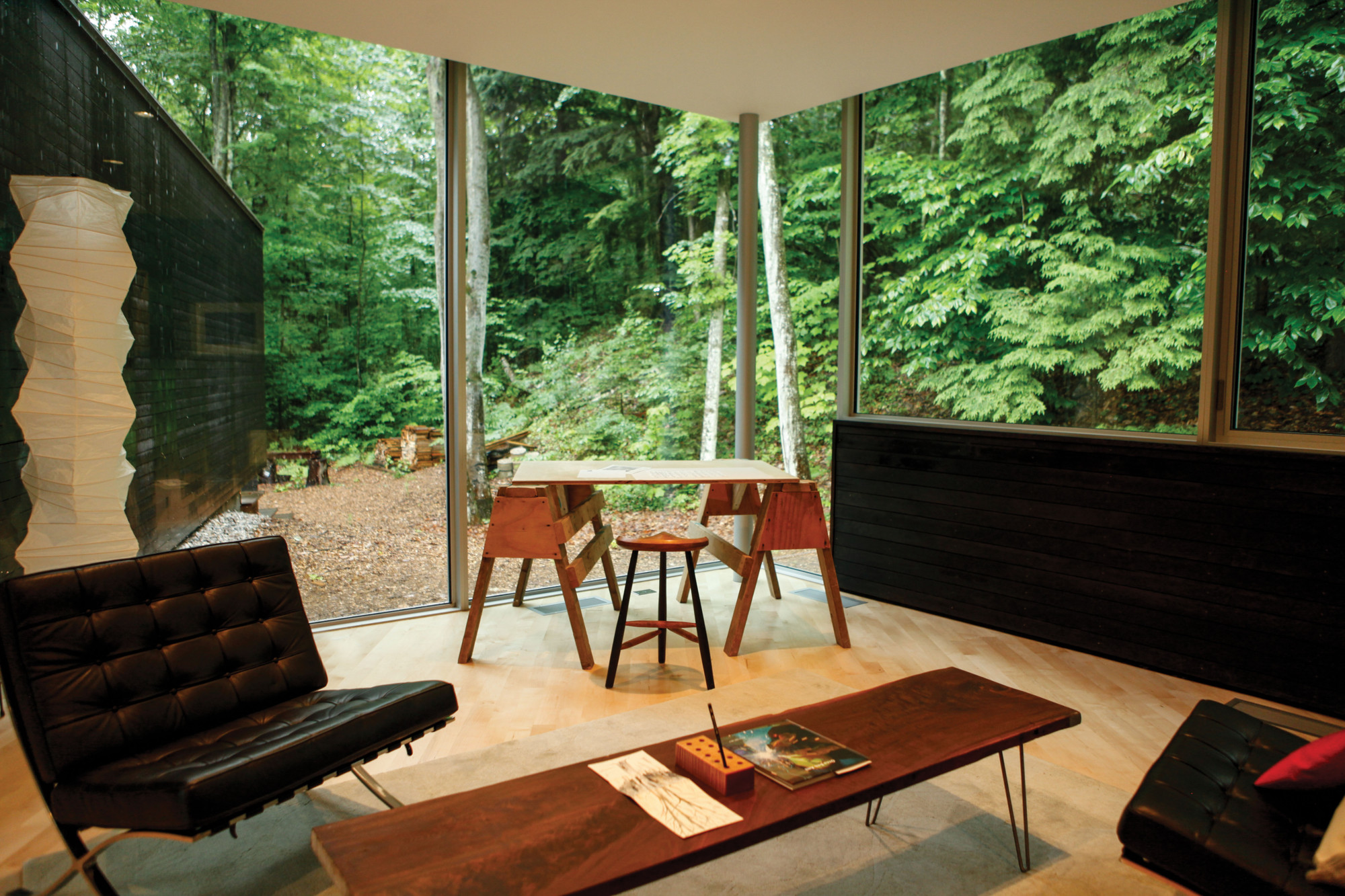 “In the morning, in the bedroom, the light comes in through the leaves, so it’s a soft light here and there,” she says. “I brought books from the library to the table [in the bedroom] in the morning, spread them out and read in bed.”

Sugawara-Beda also notes the firepit behind the guest-house as a favorite space. “That’s where I made my soot,” she says. “And each time I had a meal, I went to that spot.”

“Tusen Takk is definitely a place for solitude, especially three out of four seasons in the year,” Peckham says. “That solitude is something artists don’t get a lot of. There’s something about a solitary residency like this that resonates with people. There’s something to be said for just being in your own head.”

Artists, through their agreement with the foundation, don’t have social obligations during their time at Tusen Takk. They can be as social—sharing meals and conversations with the Peckhams, for example—or non-social as they like.

Tusen Takk’s guesthouse and studios first welcomed four artists—artist, teacher and pioneer in art production Alan Eaker; interdisciplinary artist and educator Johnny Coleman; author and illustrator Brianne Farley; and wood carver, tinkerer and sculptor Dan Webb—in 2020 and early 2021 as part of a pilot program. Since then, Tusen Takk Foundation has welcomed artists, including Sugawara-Beda, from throughout the country and around the world. 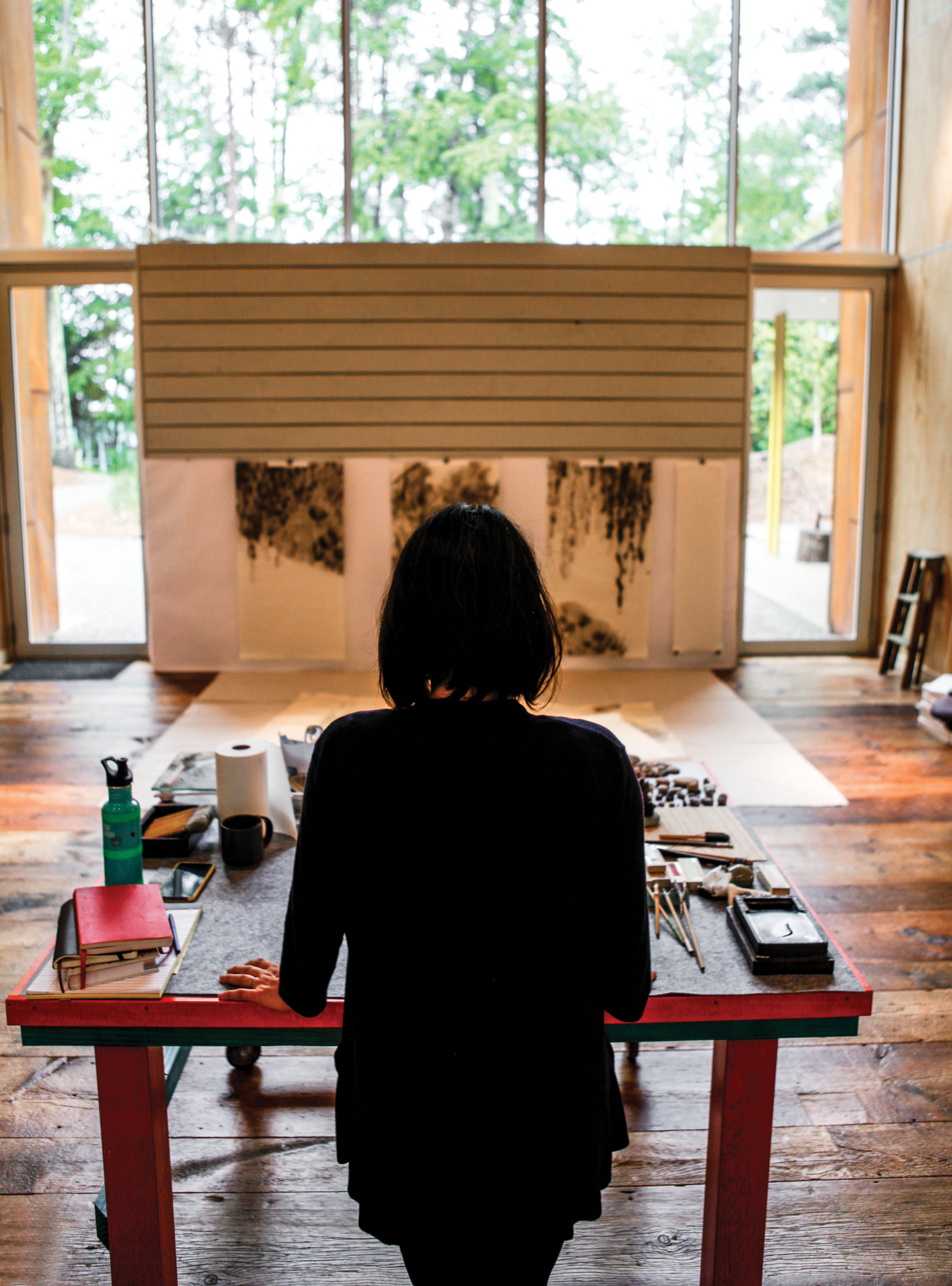 Often, these artists have left their own mark on the guesthouse in the form of their art. A favorite is a carved wooden sculpture by Dan Webb, titled “Precarious Yes,” that hangs in the guesthouse just outside the door to the studios.

“Tom had the idea of hanging it here, so that when you come out of the studios, even though you might have failed in there, you come back out and say, ‘Yes, I learned something,’” Peckham says. “We need this affirmative statement, and this was the perfect place.”

If the guesthouse and studios could talk, perhaps they would recount entertaining and humbling stories of the artists who have encountered that “Precarious Yes” every single day among Leelanau County’s ever-changing, life-giving landscape.

Emily Hopcian is a writer, editor and content producer with a focus on character-driven stories of outdoor adventure and social and environmental impact. emilyhopcian.com

Tim Hussey is the art director of Traverse, Northern Michigan’s Magazine. He is also a fine artist and photographer who enjoys shooting stories that speak to him. husseyart.com