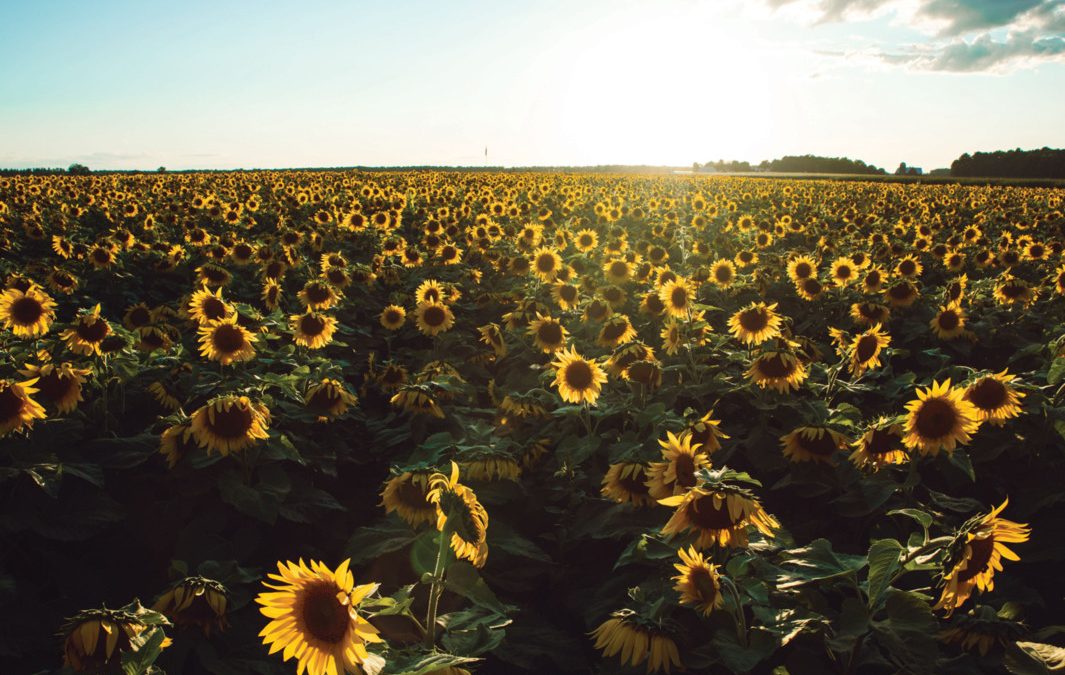 Here comes the sun! From Suttons Bay to Michigan’s Upper Peninsula, here are five sunflower fields to explore in Northern Michigan + when to go, what to bring and a little about each owner’s journey.

Witnessing a field of sunflowers all standing together, turning their faces to follow the sun, is a sight to behold—one that’s inspired artists like Van Gogh, Monet, Klimt and more. Cultivated by Native Americans, glorified by the Aztecs and the subject of Greek myths, sunflowers have a long and varied history that’s fascinated people across the world.

Despite public adoration, farmers agree that sunflowers are a persnickety crop, with their gangly stems and sensitivity to weeds and weather. They are worth the hard work, though, because they have something special beyond their harvesting purpose. Sunflowers bring people together.

In Northern Michigan, this means a communion of hard-working farmers, small-business owners and a host of visiting Michiganders seeking a good photo, a laugh or a day outdoors.

But it can be difficult to find sunflower fields, especially because the farms and nature conservancies that host them are not solely dedicated to these blooms (they also grow other crops). You can’t simply Google sunflower fields and find a robust list. Good thing you’ve got this guide!

When to See Sunflowers in Northern Michigan

Exploring Northern Michigan’s sunflower fields at peak bloom, when each one is a fabulous burst of color, will take some advance planning.

Sunflowers are impressive. In just a couple months, a small seed transforms into a plant often taller than a grown adult. However, they have a relatively short window of life at full bloom. Additionally, due to their long stems, sunflowers can easily succumb to the elements, like a heavy rainstorm or early frost.

In the North, sunflowers tend to bloom from late July through early September, but that sweet spot of peak bloom may last for only a week during that period.

This window of peak bloom differs significantly between farms, even those located nearby, because it depends on when the farmers planted their seeds. Some farms plant in succession, which can spread the flowers out over two to three months, whereas others have one fast and glorious bloom.

If you are driving a long distance or hoping for a full day in the fields, plan ahead by contacting the farmers and asking about their estimated bloom window. Many share updates on social media. As August approaches, it’s easier to estimate when the sunflowers will be most magnificent. 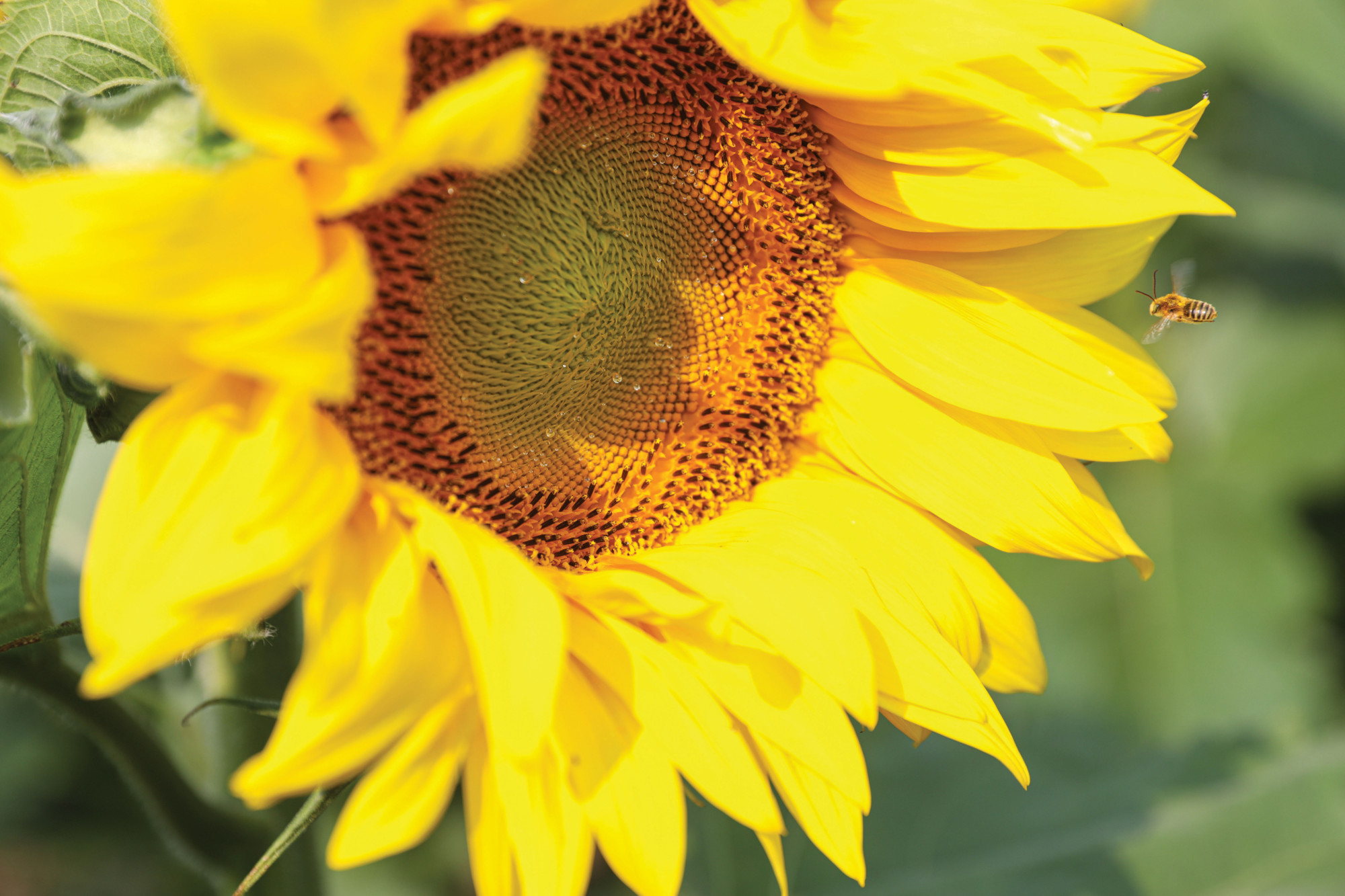 What to Bring to the Sunflower Fields

Each of Northern Michigan’s sunflower fields is unique. Some involve pulling off to the side of the road and respectfully appreciating a farmer’s hard work. Others have responded to the public’s growing interest and have more established parking areas and amenities.

Either way, here’s what you’ll need to make the most of your visit:
• Camera
• Sunscreen
• Bug spray
• Sun hat
• Water
• Sturdy shoes
• Cash for donation

Some farms provide scissors and pruning shears for you to pick sunflowers to take home. If these aren’t provided, then it’s best to assume U-Pick is not allowed, and enjoy the field with your eyes and camera only.

Location: 2623 St. Nicholas 31st Rd., Rock, U.P.
Owners: Dan and Teressa Hall
Best time to visit: Early to mid-August, with peak bloom lasting seven to 10 days. Watch their Instagram and Facebook pages for bloom and weather updates.
U-Pick? Yes
––
Located in the Upper Peninsula, half an hour north of Escanaba, is one of the most impressive sunflower farms in the state. Dan and Teressa Hall began farming 40 years ago, growing sunflowers to harvest for bird seed. A few years later, some people asked to take graduation and engagement photos among the flowers. “[When they] posted their photos online, the requests to see and photograph our field exploded,”Teressa says.

Now, their roughly 20-acre field of hardy black oil sunflowers is open to the public each summer. It seems to stretch endlessly toward the sun, and visitors can immerse themselves in the flowers with walking paths, elevated viewing decks and photo opportunities (such as a giant painted minion) that Dan and Teressa have created over the years. It is a photographer’s playground. “Our sunflower field has grown every year beyond our wildest imagination,” Teressa says.
––
Favorite thing about growing sunflowers: “Meeting and talking with visitors; hearing their stories about why they like to come here and seeing their beautiful photos.” –Teressa Hall 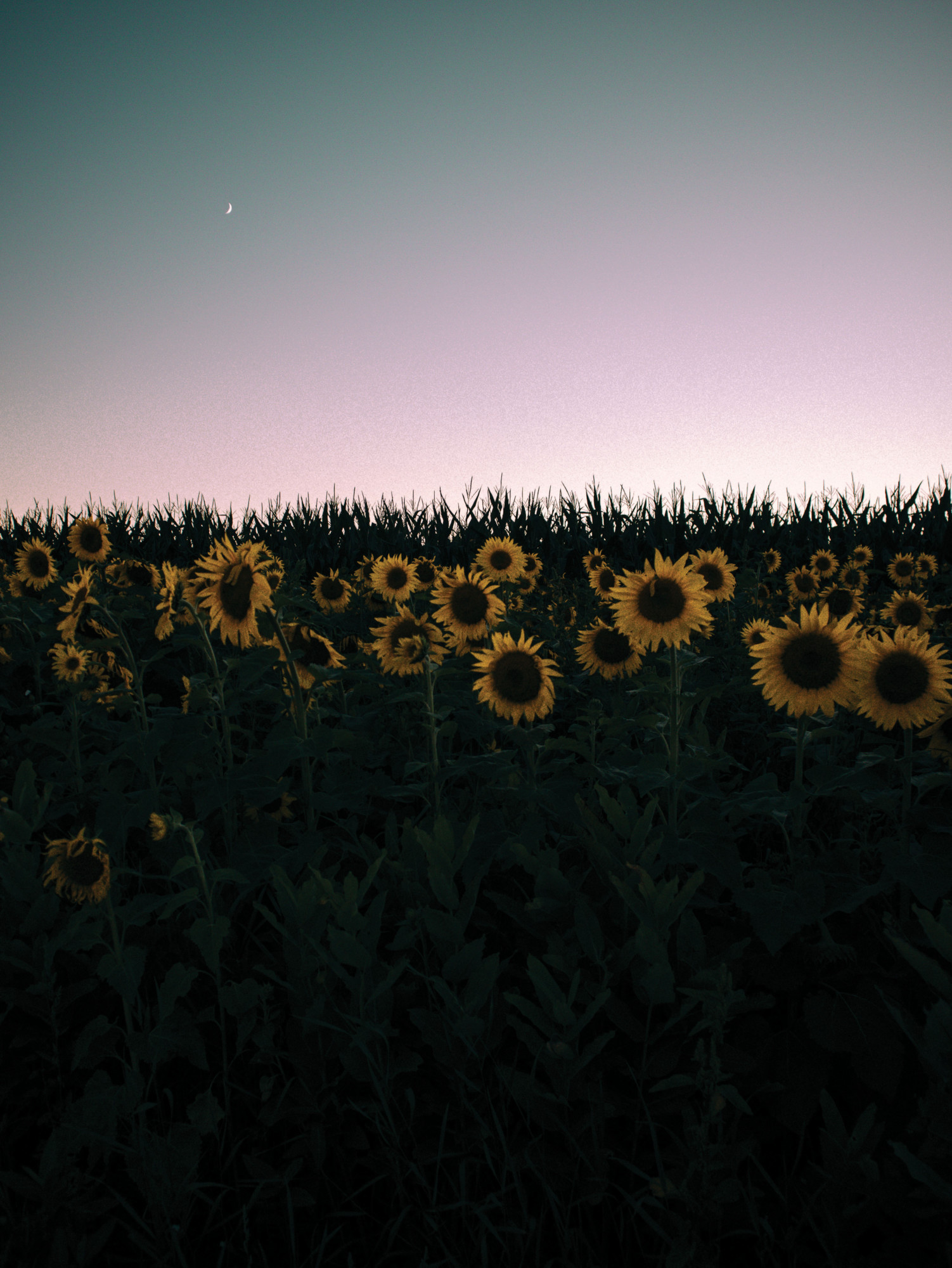 Location: 8670 Bates Rd., Williamsburg (at Bates and Hawley roads)
Owners: Mark, Eric and Marty Send
Best time to visit: Mid-August, but check for updates on their Facebook page.
U-Pick? No
––
With more than 350 acres, you’d think the Send brothers’ sunflower fields would be hard to miss. But you’ll need an old-fashioned map to the intersection of Bates and Hawley roads in Williamsburg. The Send brother’s impressive fields won’t show up on any GPS because they’re just that: fields in a working farm.

Despite being a working farm, visitors are welcomed each summer to pull off to the side of the road and view the flowers. “Please don’t pick the sunflowers, just admire their beauty,” says Mark, who partners with his brothers Eric and Marty to run their farm and feed business. This will be a particularly poignant year for the Send brothers’ sunflowers. Last year, their fields were destroyed in a matter of hours just days before peak bloom by a terrible wind and rain storm. However, the Send brothers have been farming for their entire lives, says Mark, and that will continue this year.
––
Favorite thing about growing sunflowers: “To see the beautiful artwork that you and God have created and to see people enjoy them.” – Mark Send 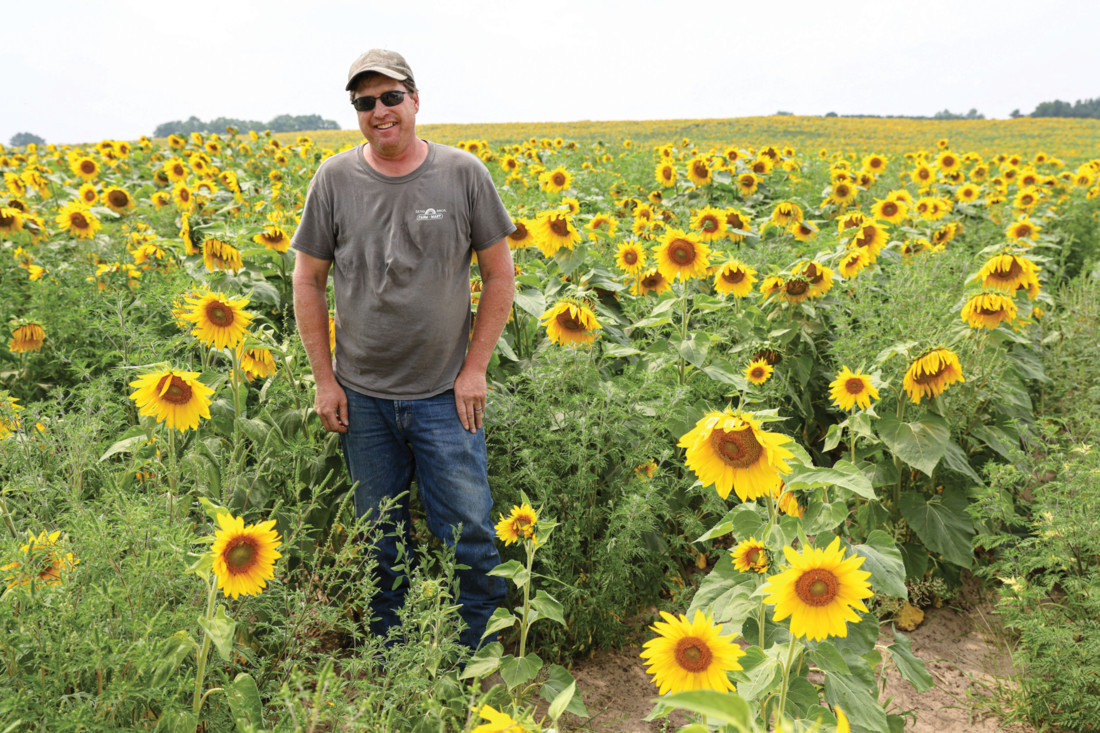 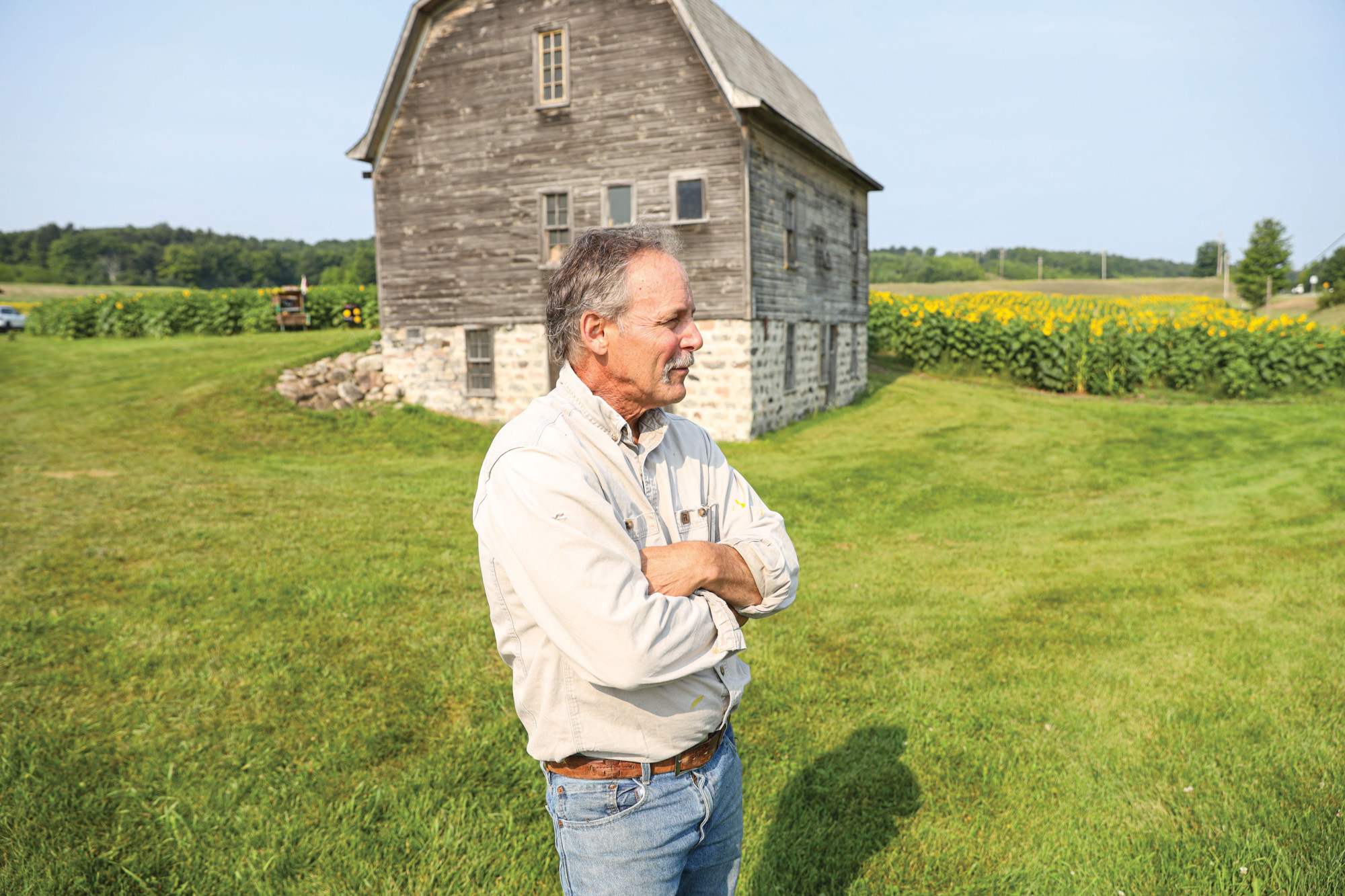 ––
If you’ve ever driven across the Leelanau Peninsula on a late summer day, you may have been lucky enough to have seen the blooming sunflowers off M-204. This is Leabo Farm, which has been operating for more than 60 years since it was started by Peter and Josephine Leabo in 1962. Now, it’s run jointly by their children. Twelve of the farm’s 150 acres are devoted to sunflowers which, set against a weathered barn and green woods, are a beautiful sight to see.

“We’re open to having people stop by and take photographs,” says Peter Leabo, one of the co-owners of the farm—and who has been playfully dubbed “Sunflower Pete” on social media by one of his siblings. There are parking spots off M-204, and U-pick is available on an honor system. During your visit, you’ll likely run into one of the Leabos. You’ll also find a few ladders and platforms throughout the rolling field, which are perfect for photo opportunities.

“We have a lot of people who come back year after year,” Peter says. “It helps the farm stay viable in a new age. We like to have the community.”
––
Favorite thing about growing sunflowers: “Sharing them with other people.” – Peter Leabo 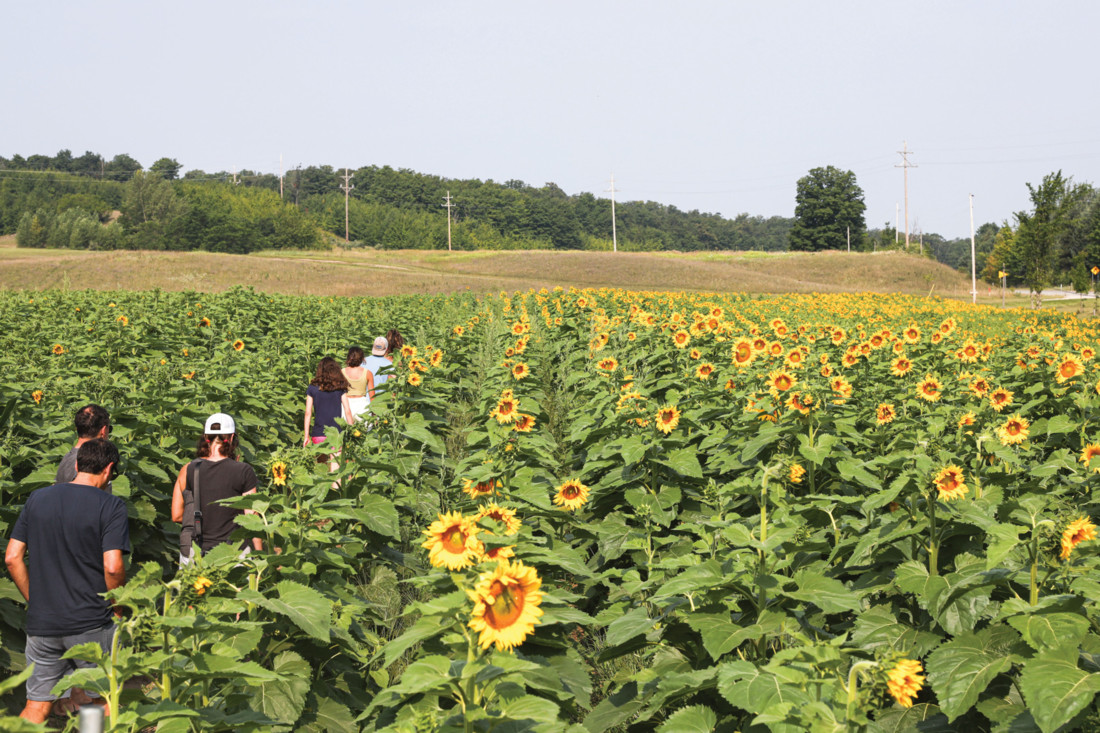 Location: 16550 Center Rd., Traverse City
Owner: Virginia Coulter
Best time to visit: Open daily from dawn to dusk during the summer months. Due to succession planting, sunflower blooms can last two to three months.
U-Pick? Yes
––
“My vision was quite small: I wanted to quit my job and grow flowers,” says Virginia Coulter who, at the age of 60, started a small cut flower farm near the northern tip of Old Mission Peninsula. At just over an acre and with more than 100 varieties of densely planted flowers, this isn’t a typical sunflower field. What you will find, however, is one of the best views in Northern Michigan: a few rows of tall sunflowers high on a hill, directly overlooking Grand Traverse Bay.

Old Mission Flowers is an ideal destination for gardeners and photographers alike. Unlike many of the larger farms, there are fewer sunflowers here but more diversity: orange, pale yellow, chocolate, multicolor; and in 2022, Virginia plans to plant a pink variety.This is a self-serve pick-a-bouquet business, so you can drop by anytime and cut your own flowers.
––
Favorite thing about growing sunflowers: “Sunflowers are miraculous! It never ceases to amaze me that I can plant a seed and a couple of months later have a plant taller than I am with a flower bigger than my head.”– Virginia Coulter 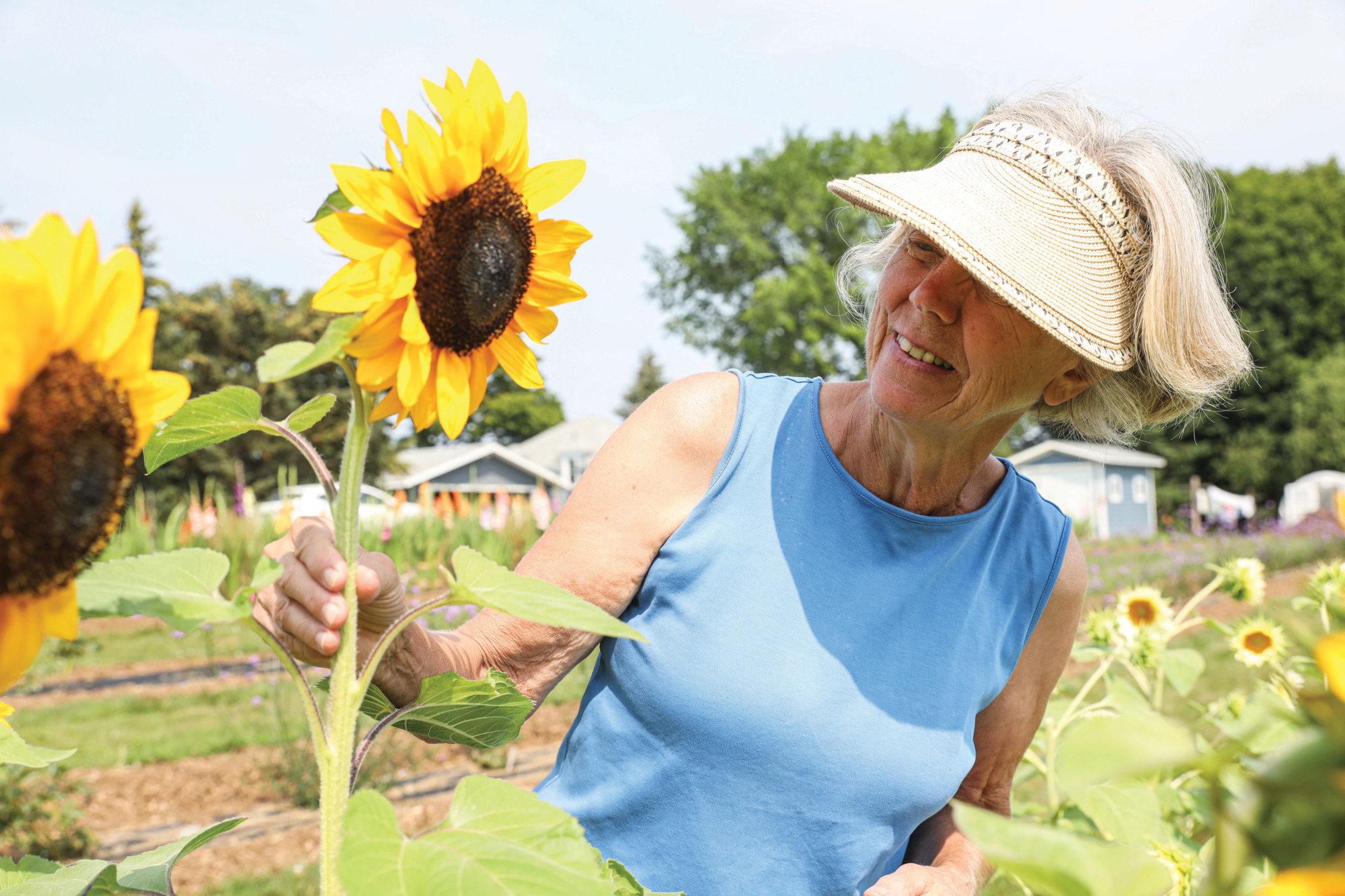 Location: On either side of US-31 in Williamsburg, near Maple Bay Farm
Owners: Grand Traverse County owns the property but leases it to local farmers.
Best time to visit: Early to mid-August, but be aware these fields aren’t planted every year.
U-Pick? No
––
The fields here are a part of Maple Bay Natural Area but are leased to a local farmer by the county. You should know there isn’t a guarantee you’ll find sunflowers here—the crops are often rotated every other year. That said, last year was meant to be the “off ” year, but row after row of sunflowers popped up.

It’s worth taking the chance to drive by. For the best parking spot to view these fields, drive south of Maple Bay Natural Area, parking off US-31. On the west side of the road, right after you pass the Maple Bay Farmhouse, there should be a small gravel lot with space for about five cars. Here, you can walk along the field and there is even a platform set up for better viewing. Last year, there was a small wooden sign reading simply: #outerrimfarm. It may be worth checking this hashtag on social media before your visit, to see if the sunflowers are in bloom. 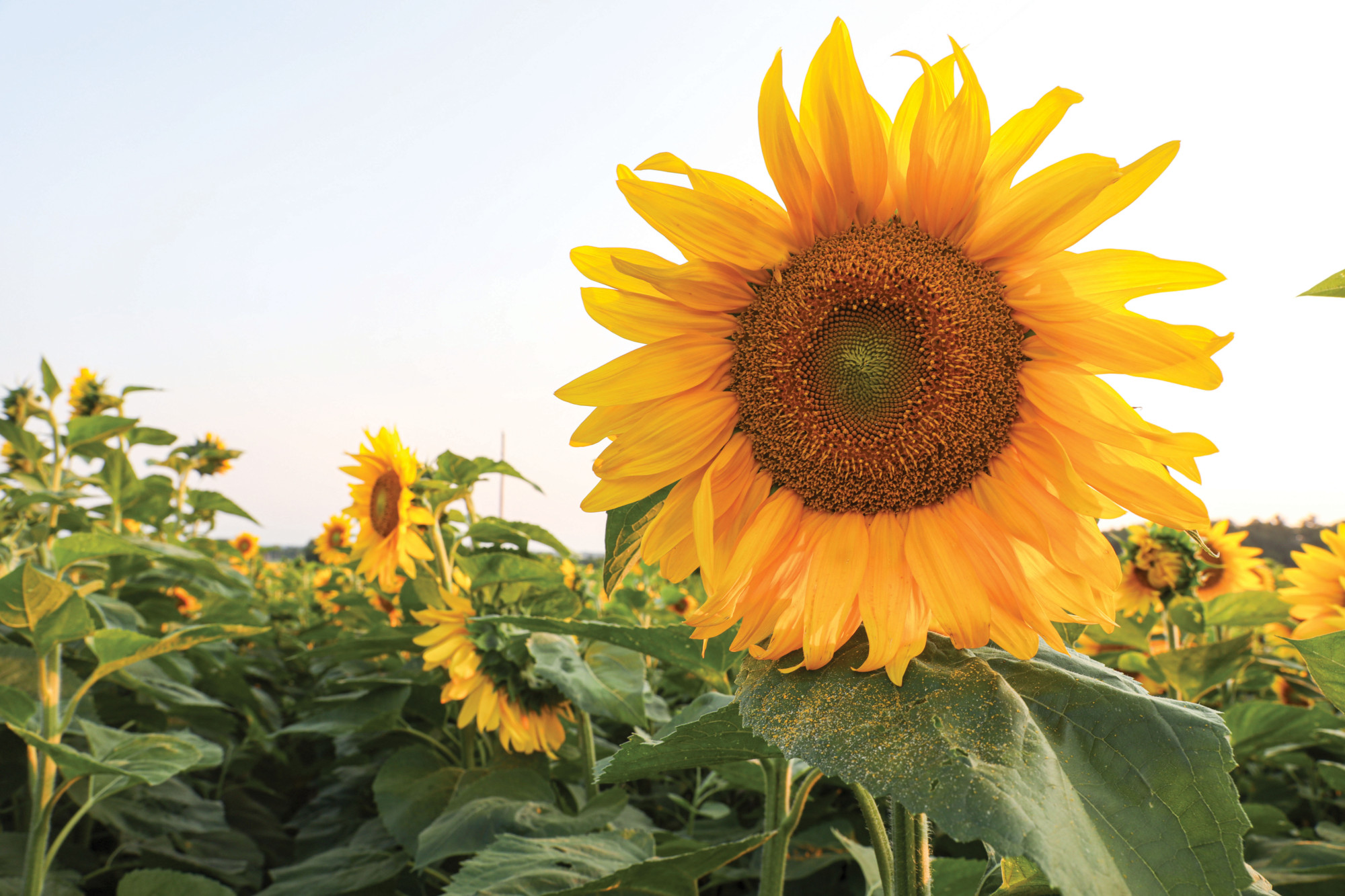 Sarah Bence is a freelance writer and occupational therapist based in Michigan. Follow her travel blog @endlessdistances on Instagram.

Allison Jarrell is the managing editor of Traverse, Northern Michigan’s Magazine. Reach her at allison@mynorth.com.