Tour the Mackinac Bridge by Kayak with this St. Ignace Guide 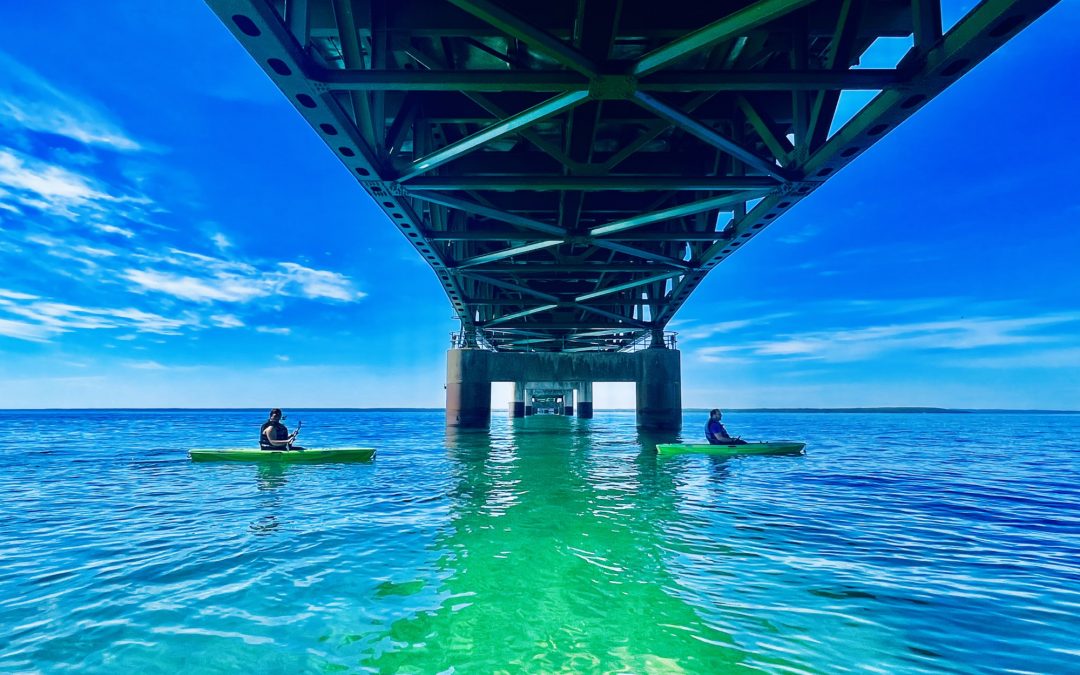 Paddling underneath the Mackinac Bridge—and crossing from Lake Michigan to Lake Huron—deserves a spot at the top of your Michigan summer bucket list. Head to Michigan’s Upper Peninsula for the start of this one-of-a-kind adventure with help from St. Ignace Visitors Bureau.

It’s one of those crystal clear, blue sky mornings you dream of in June—not a single speck of haze on the horizon. My fiancé and I are standing along the shoreline at St. Ignace’s Bridge View Park, in complete awe of the glassy, turquoise water rippling out as far as the eye can see. It’s as calm as I’ve ever seen Lake Michigan, and a sure sign that today’s trip will be one for the books.

We take in the park’s namesake bridge views—fresh blooms framing the Mighty Mac—before heading down Boulevard Drive to Captain Andy Stempki’s family home, which doubles as home base for his business, Tamlyn’s Tours and Kayaks. Jovial and eager to get us out on the water, Andy bounds across his lawn and preps the kayaks while we don our life jackets. 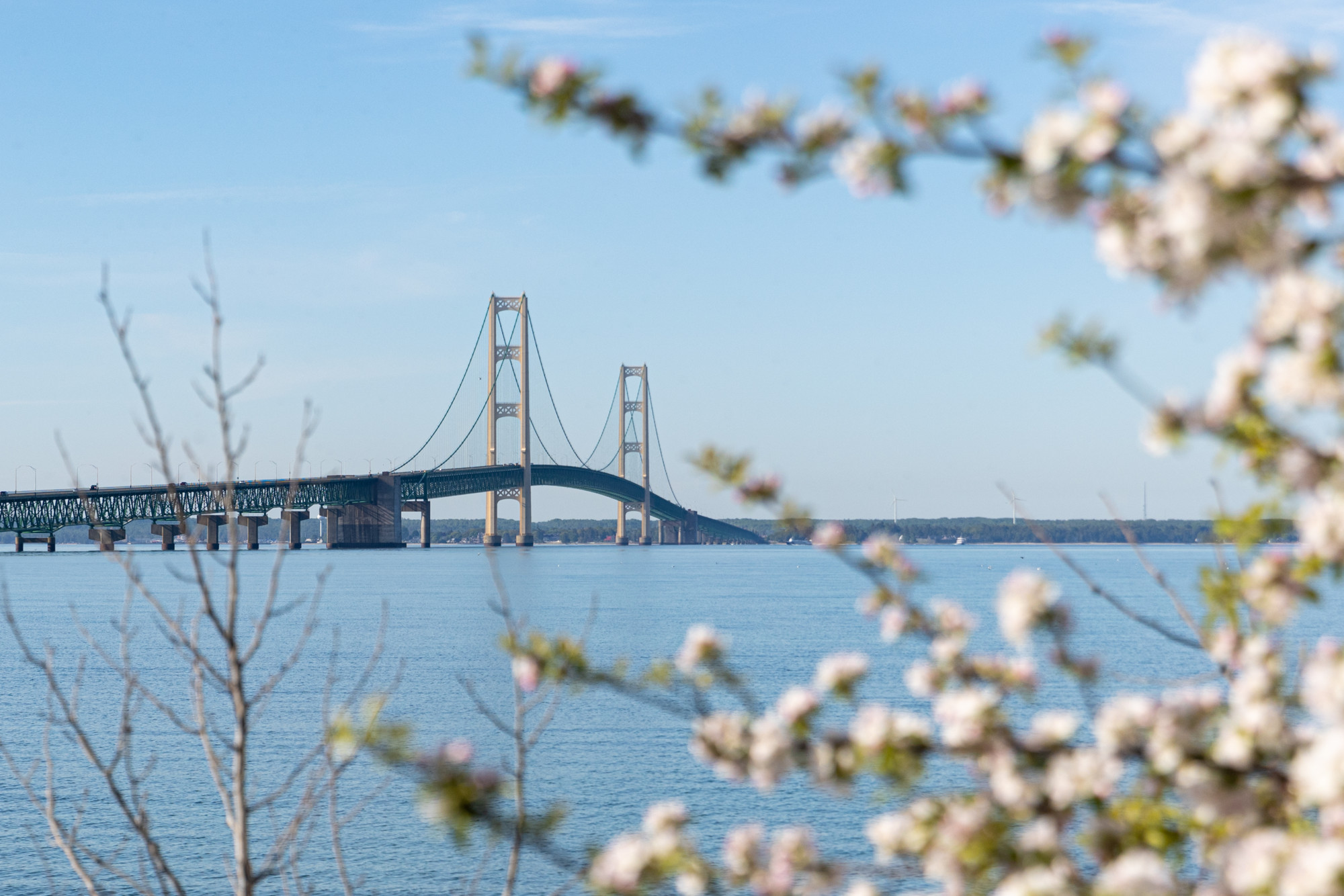 As we shove off and dip our paddles into the shallow bay, it quickly becomes apparent that we couldn’t have asked for a better guide. Andy points to neighboring houses (all with their own intricate histories) and shares colorful stories about the locals past and present who have called this slice of paradise home. We find out that Andy was born and raised in St. Ignace, and his father, Allen, spent his career working on the bridge—first, as a painter out of high school in the mid-‘70s, and primarily as a foreman up until he retired in 2002. “He ran the summer crews, the paint crews and maintenance on the bridge,” Andy says.

As we paddle nearer to the causeway—not a soul on the water but us—Andy recounts stories from his dad’s time working on the bridge, as well as his own background: Eventually, he left St. Ignace to spend time down in Florida, where he became a schooner captain. Then at 37, he joined the Coast Guard and became a reservist, working as a medic. About five years ago, he found a property along W. US-2 (where he now offers camping and lodging) and realized that everything he was pursuing in Florida he could find right at home, in St. Ignace.

In 2018, Andy started offering guided tours with just two kayaks. “It was kind of one of those stories where you fake it ‘til you make it,” he says, “and now we have brand new kayaks, enough to pretty much handle every crowd that’s ever called me.”

Andy points along the horizon and we spot a small, jagged plank rising up from the depths. I’m thrilled to hear that we’re headed to what he calls the “Ghost Dock” before we cross the bridge. We glide toward the plank to find ourselves floating above a massive submerged dock, like the tip of an iceberg, which Andy says has been sitting there in ruin for 60-plus years. 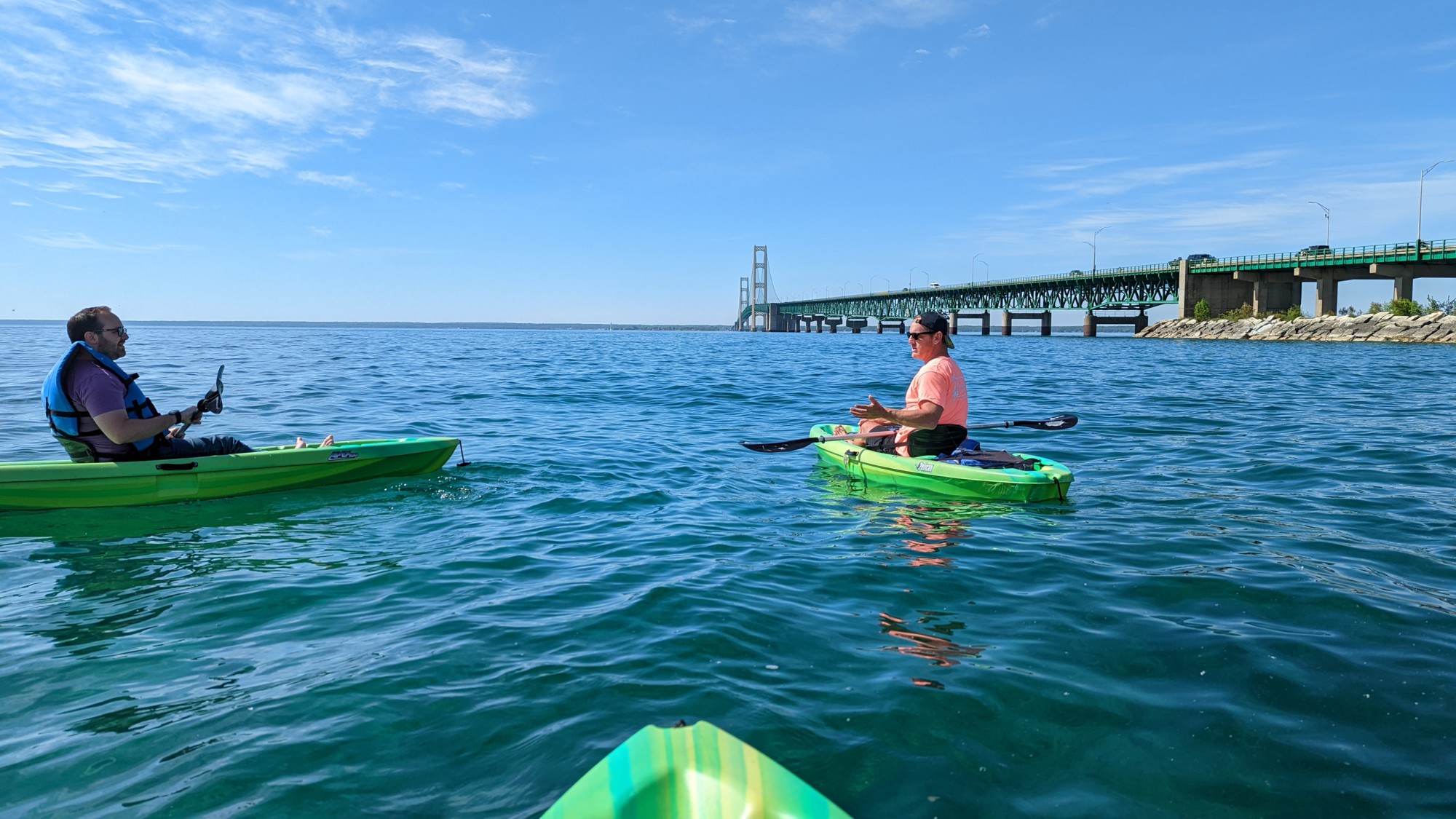 He tells us that once construction on the bridge resumed post-WWII, this ferry dock was built and paved for workers to park on, and they’d walk down to the end and board their respective ferry boat, headed to whatever pier at which they were stationed. After the bridge was completed, a new dock was constructed on the other side, which was better protected from the Straits winds. Thus, the ferry dock slowly faded into a ghost dock. When he was a kid, Andy recalls being able to see the wood on top—you could almost still walk out there. Now, a tiny plank remains the only marker.

We paddle under the causeway, greeted on the other side by the glistening, rolling waves of Lake Huron. Andy glances at the bridge traffic above. It’s odd, he says, that we haven’t received a single honk yet. “Usually we get at least two or three per trip,” he notes with a grin.

As we head toward Pier 34—the last pier of the bridge—we learn another connection between Andy’s family and the bridge: his house. The original owner, Charles “Ed” Haltenhoff, was an engineer for Merritt-Chapman & Scott, the company that laid all of the piers. Ed stayed on as the engineer of the Mackinac Bridge, and at some point, bought the property. Rumor has it that nearly all of the material used to construct his house was brought down from the bridge and adjacent office structures. One of the folks who helped Ed build his home jokingly carved in the rafters, “Pier 35.”

As the story goes, Pier 35 became the unofficial headquarters for officials like bridge engineer David B. Steinman to meet and work through project logistics. 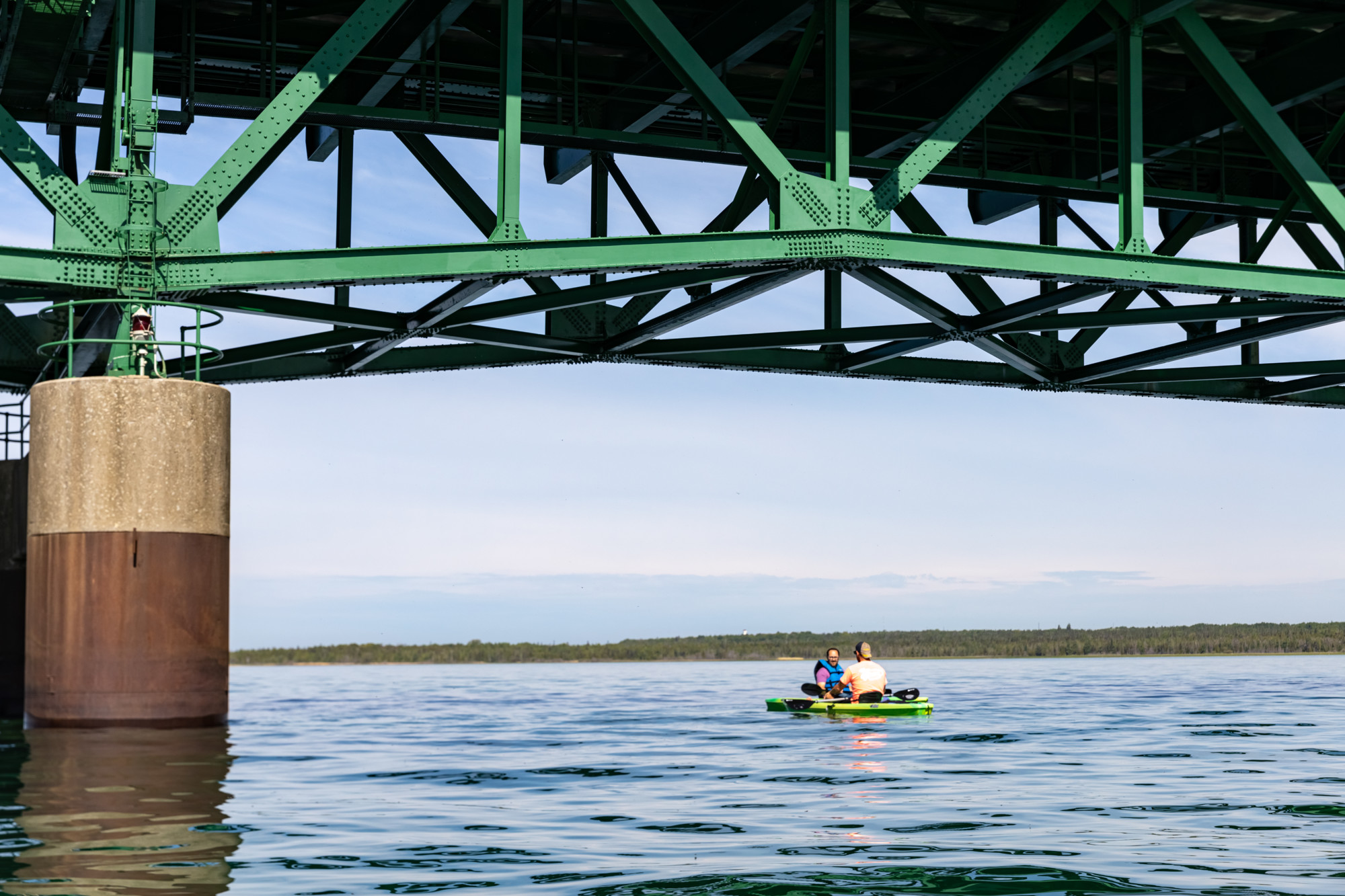 They would come down there and Ed’s wife would cook for them all, and they would be drinking and carrying on,” Andy says. “This generation had just won the war, and now they were tasked with building this sort of impossible bridge. They were these engineers-slash-cowboys who were quite the characters. Ed’s son has jokingly told me, ‘as much as those guys drank and hosted parties, I can’t believe that bridge is even straight!’”

(Ed, by the way, ended up selling the house to Walter North, the executive secretary of the Mackinac Bridge, who went on to become a state senator. And Walter sold it to Andy’s dad. “That house has been in the hands of bridge workers since day one,” Andy says. “It’s pretty cool.”)

Floating under the bridge, I watch the water reflections sparkle and dance along the bright green rafters above, admiring just how remarkably straight it is. Well done, guys.

We slowly pass back to the Lake Michigan side, and as we paddle toward the shore, I can’t help but smile as we hear a couple faint beeps in the distance—we finally got our honks.

Andy tells us to take our time and paddles ahead, giving us some moments to ourselves. My fiancé and I lock eyes and smile. We’ve both done our fair share of kayaking Michigan’s lakes and rivers, but paddling under the bridge was an experience we’ll never forget. We’re already planning next summer’s trip. 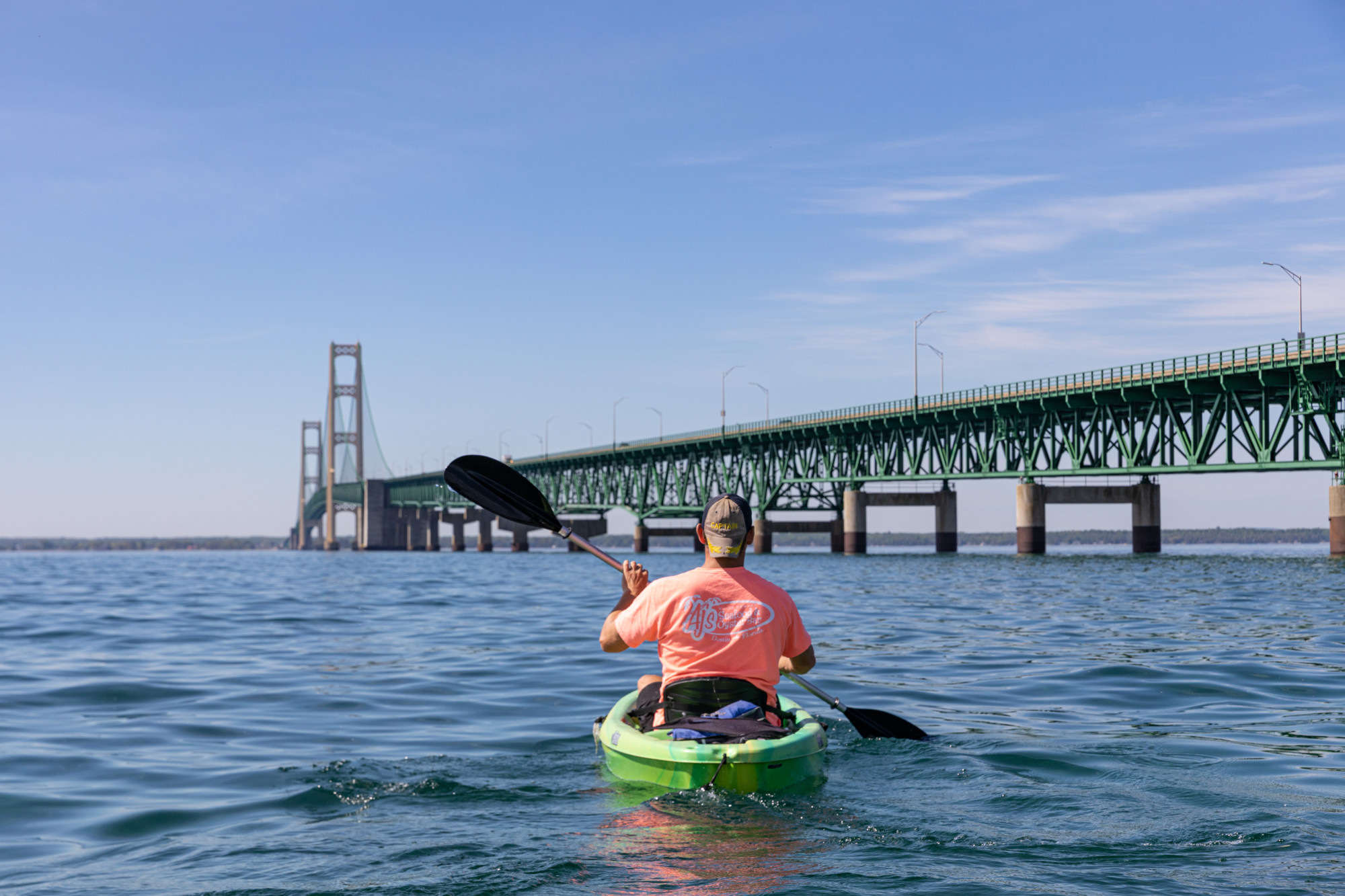 How to Book Your Mackinac Bridge Kayak Trip

To schedule a guided kayak tour with Andy, give him a call at 906.430.0123. He offers tours seven days a week, generally from about 8:30 a.m. to 7 p.m., and recommends getting out on the water when it’s calmest—in the morning and later in the day. He can accommodate groups of up to 15 people, and trips are about two hours long and cover 3.5 miles.
(Pro tip: Extend your trip and stay on one of Andy’s five rental yachts in St. Ignace and on Mackinac Island that sleep 4-6 people. Give him a call for details.)

For more information on guided kayak excursions and rentals, visit poupardbaypaddlesports.com. View more photos from this kayaking adventure below. 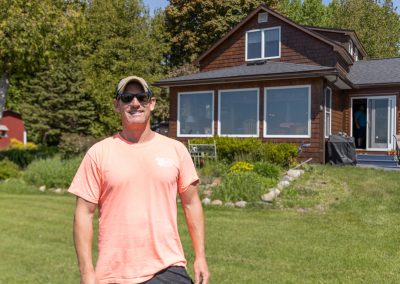 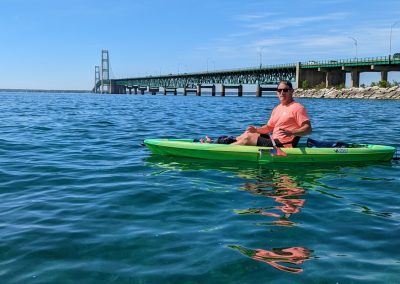 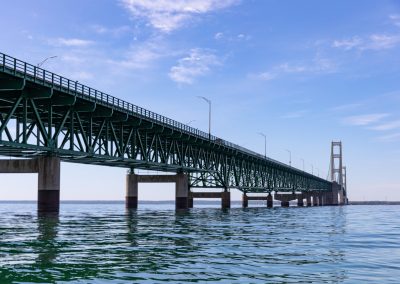 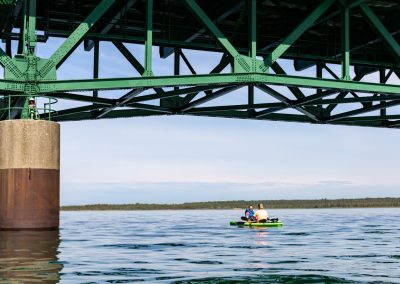 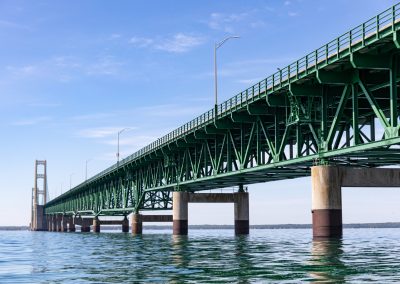 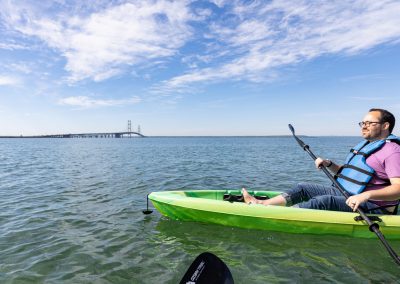 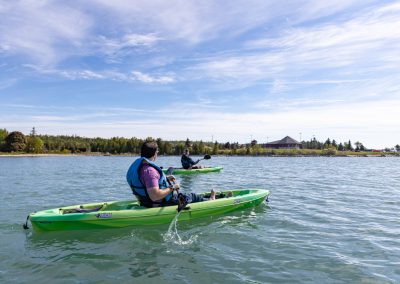 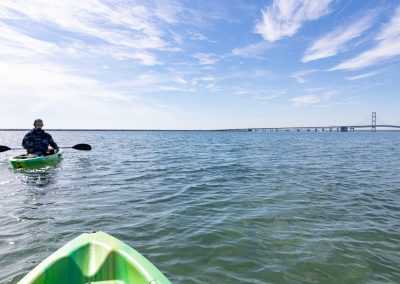 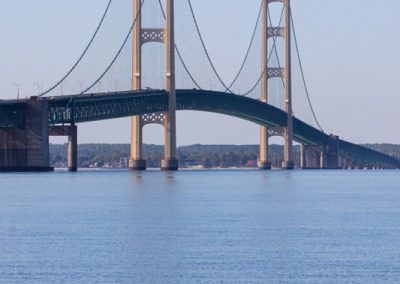