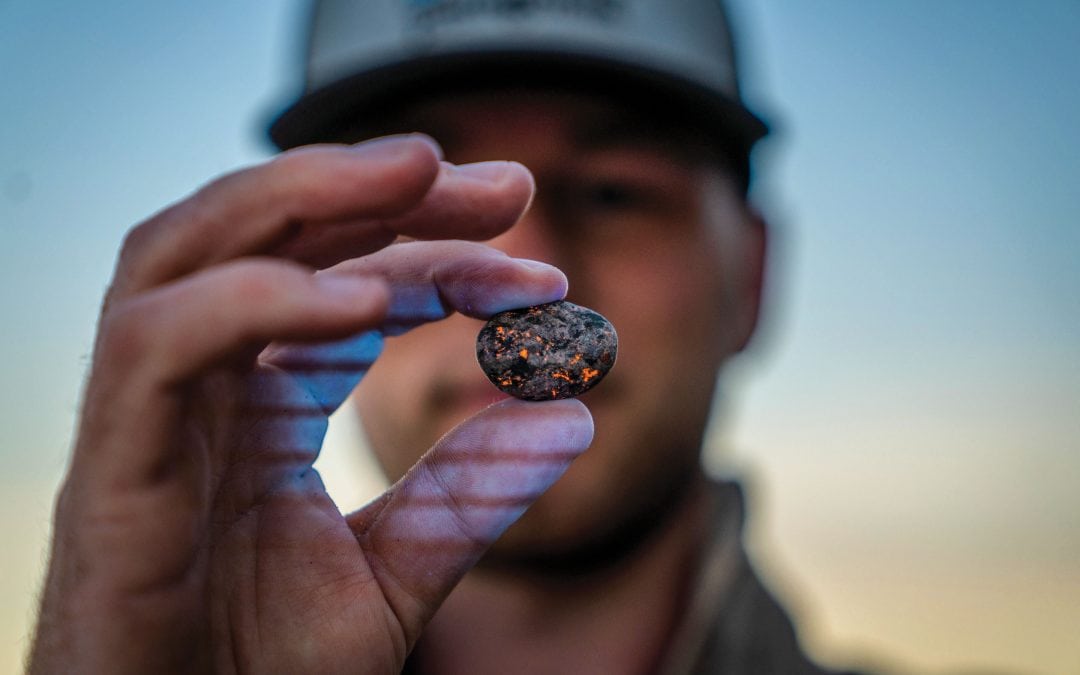 How one rock hunter found The Golden Egg and made his dreams come true. Head to Michigan’s Upper Peninsula to find Yooperlies! From hunting tips to paranormal sightings, head into the dark of night to find these elusive rocks this summer in Northern Michigan.

Our night starts at the Pine Stump. We settle into a pine-slab table at the local watering hole a few hours north of the Mackinac Bridge, and tuck into bowls of chili and grilled cheese sandwiches.

We’re dressed in winter coats and hats because it’s September and we’re in the U.P. And because we’re on the shores of Lake Superior, waiting for a guy sporting a long, gray beard and some UV lights. We’re waiting to go Yooperlite hunting at dark.

That bearded guy is Erik Rintamaki, founder and discoverer of the now world-famous “Yooperlite.” Yooperlites are nondescript gray rocks that have a type of mineral—sodalite—in them that glows like neon under UV light. And they are the first sodalite to be found in Michigan. 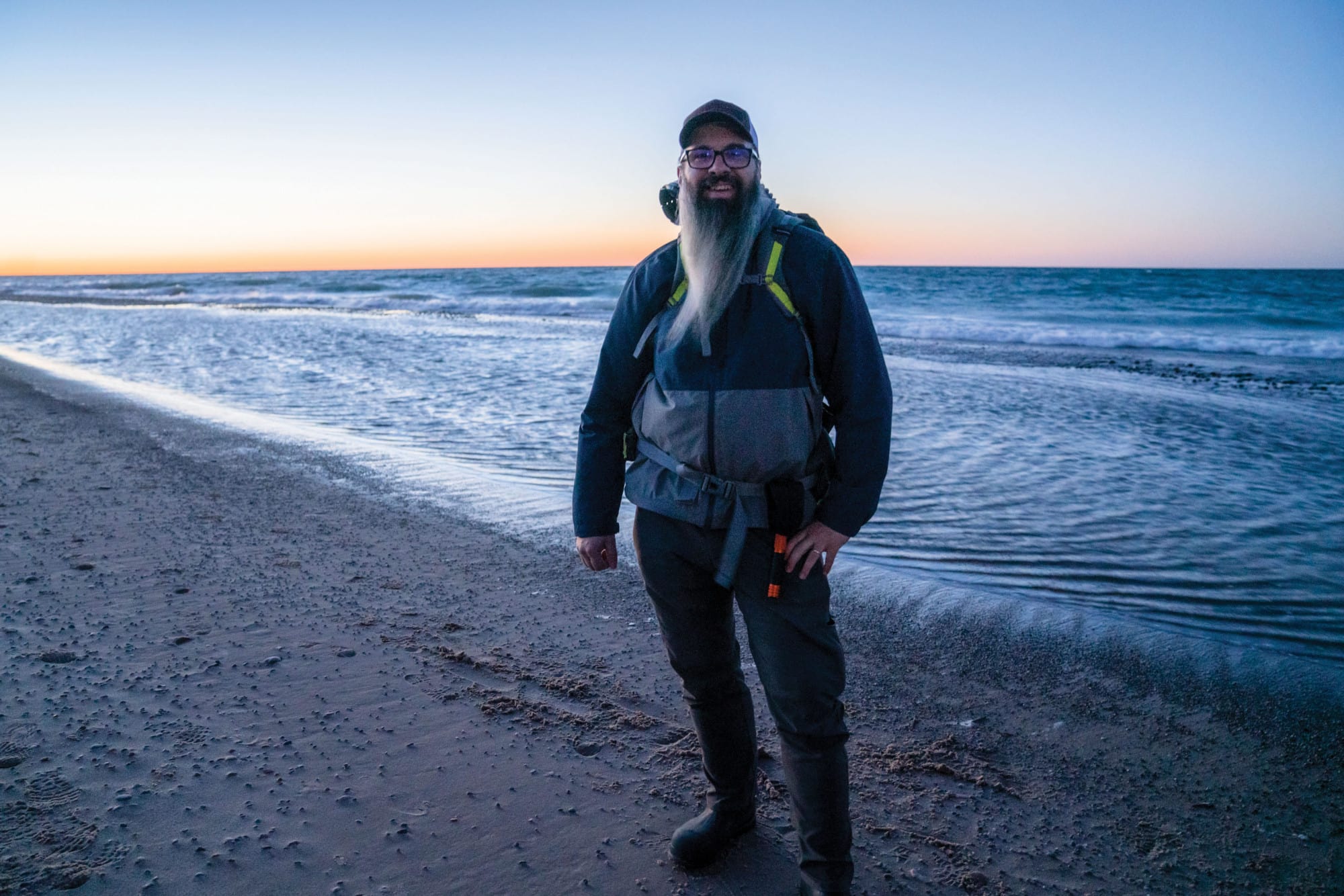 “I’m just an avid rock hound who found the golden egg, as they say,” Erik says with a laugh. “I can’t believe everything that has happened since finding the first Yooperlite.”

To put it mildly, the discovery changed Erik’s life.

It started in 2017 when Erik, who grew up in Newberry, was out hunting for rocks. As an ardent agate collector, he sells Lake Superior gems at rock shows all over the United States. At the time, he was also working as a manager at a casino in Brimley.

On that June night, he took a UV light out on his hunt to see if agate might “fluoresce” in the dark. It was just another normal night of rock hunting, he says, with his wife wondering when he might get home and why he’d spent money on a UV light.

To his shock, Erik came upon a speckled rock, glowing orange in the night.

Eventually, the Michigan Mineralogy Project analyzed the rocks and confirmed that they were a unique discovery in Michigan. Erik had the rights to the discovery, so he could name the rock. He chose “Yooper” for his native U.P. and “lite” because of the glowing sodalite in the stones.

There are sodalite rocks found elsewhere in the world, but this unique rock glows orange and is found most prevalently along the shores of Lake Superior, though there have since been finds on all five Great Lakes.

“Right away, I decided I would take Yooperlites to a rock show here in Michigan and see what others thought,” he says. “They were a hit!”

Shortly thereafter, Erik took Yooperlites and the must-have UV lights to a rock show in Tucson, Arizona. He sold $14,000 worth in one day. The next day, he did even better. It was more than he made from a whole year of working at the casino. 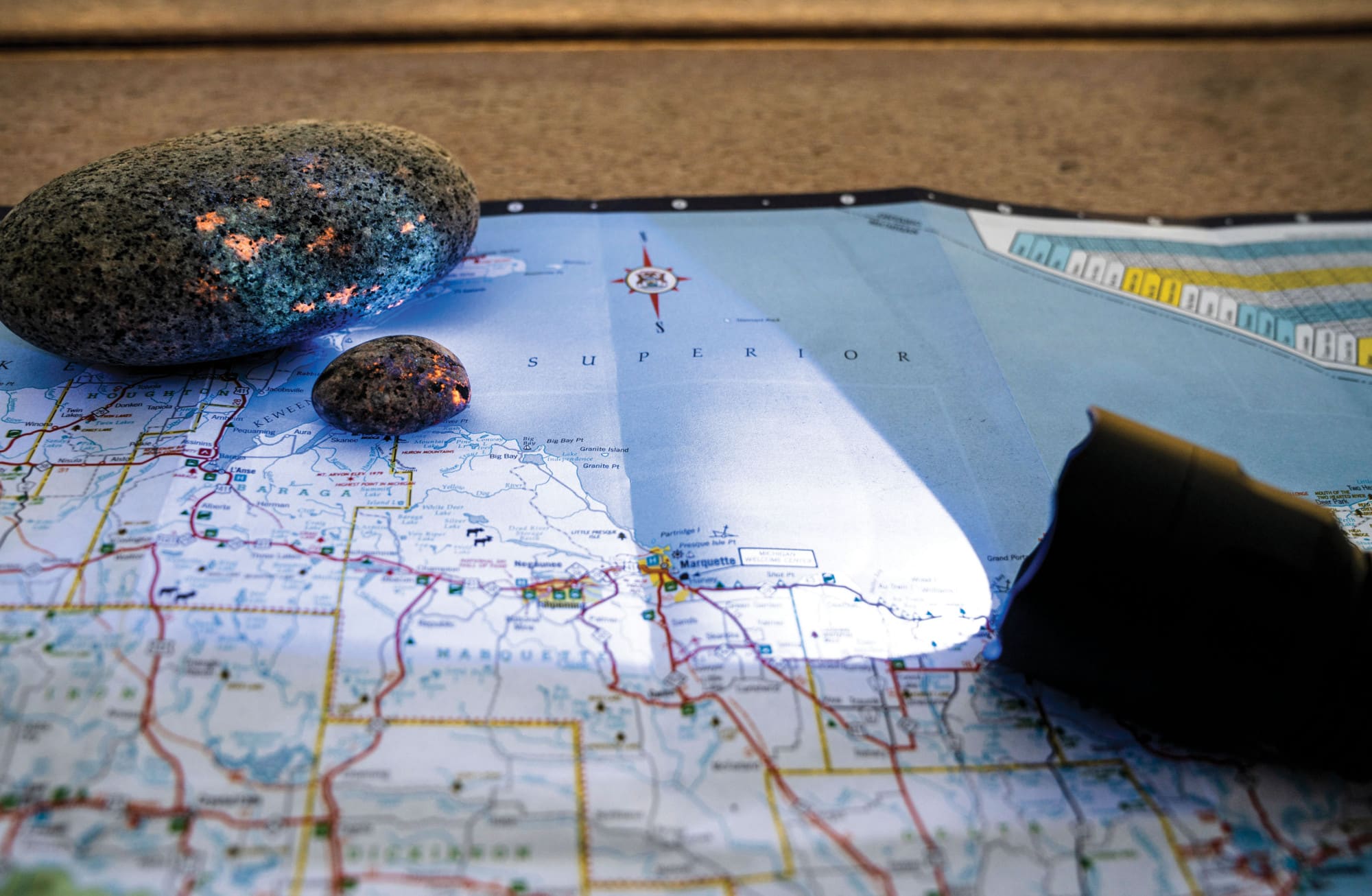 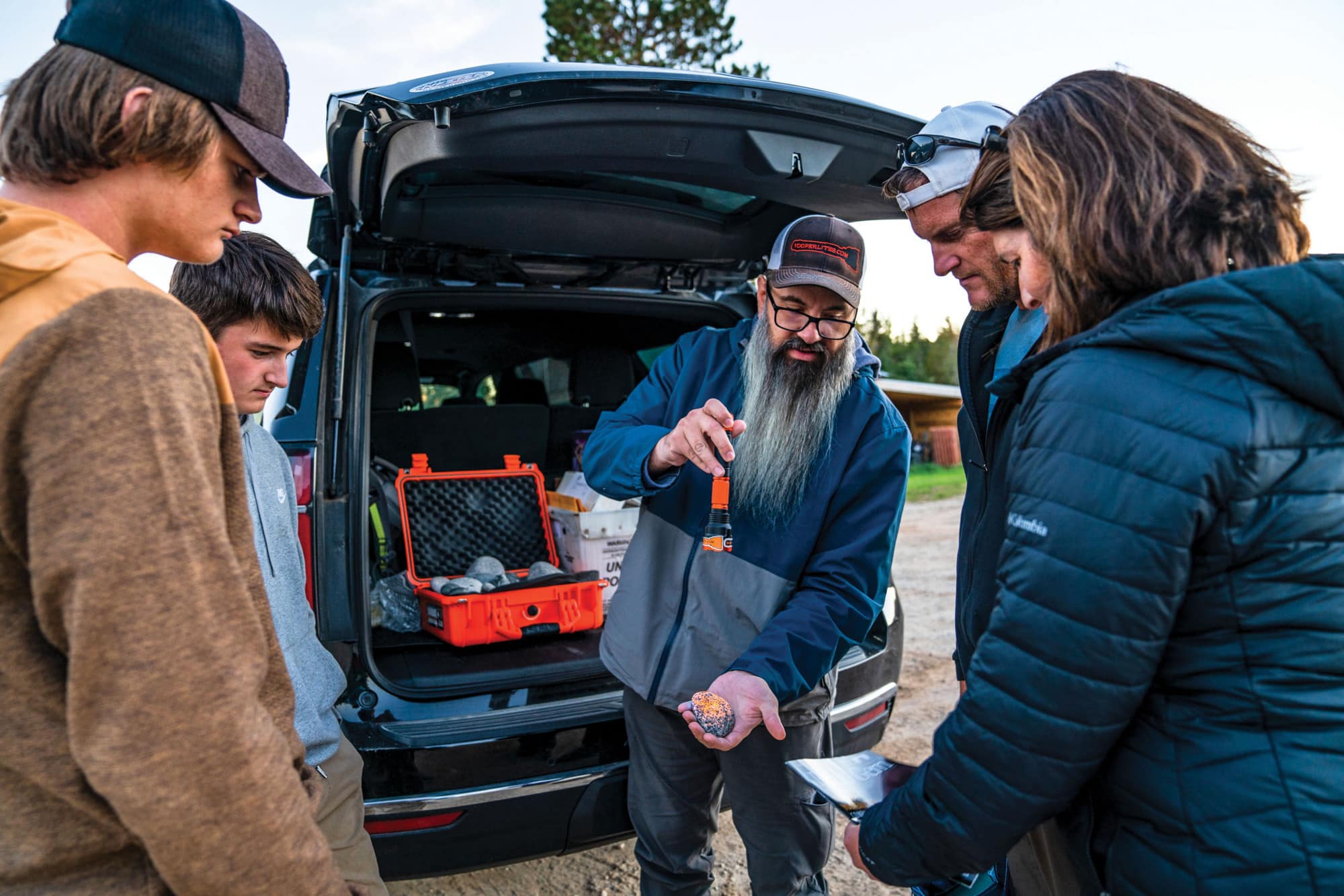 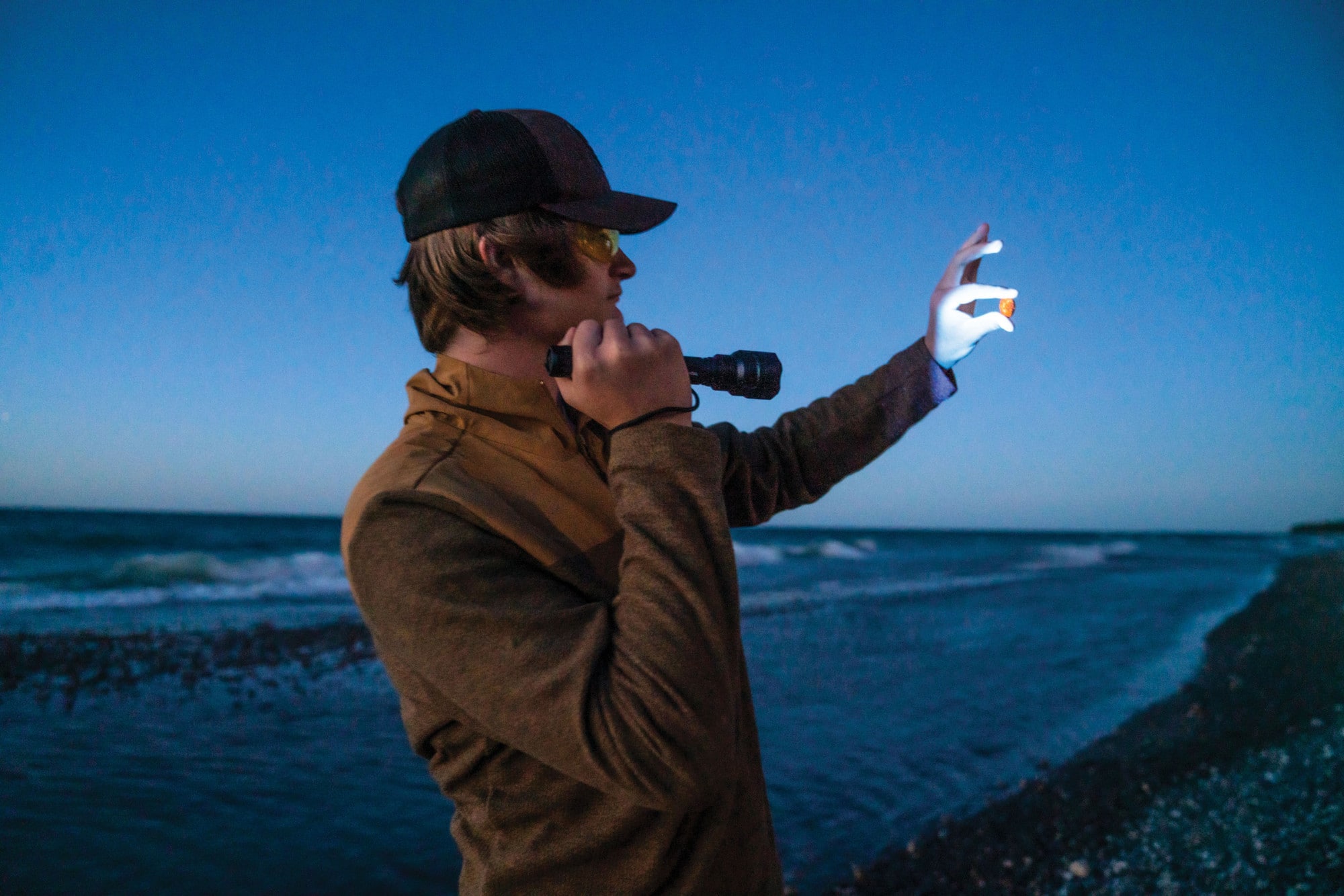 When Erik got home, he told his wife he was quitting his job and going full-time into Yooperlites. “She wasn’t as sure as me,” he says, laughing. “She still has her job at the casino, but I went all in on Yooperlites.”

Today, Erik has fans all over the world, as he has been documenting his discovery from the start on his YouTube channel, which has more than 15,000 subscribers. He’s one of the biggest sellers of UV lights in the United States, and he does several night tours a week on the shores of Lake Superior from July to October. Erik also continues to go to rock shows—he’s even been to Japan, where Yooperlites became a sensation and he was treated like a celebrity. Erik now has a store in Brimley, too, where folks can buy Yooperlites and UV flashlights.

Erik has been featured on PBS, CBS, NBC, The Travel Channel, The History Channel and more, as well as published three times in the rock hound’s most-revered publication: Rock & Gem Magazine.

“I had three goals when I started: to get a new Suburban, to get in Rock & Gem Magazine and to make a million dollars,” he says. “I got the first two, and I’m almost to the third.”

On the night of our tour, Erik picks us up at the Pine Stump, loads my family and the Traverse photographer into his vehicle and takes us down winding dirt roads, maples towering above, headed for Lake Superior. We pass several spots where there are cars parked in pullouts.

“See those cars? All Yooperlite hunters!” Erik says, smiling. “We’ll keep going until we find a spot farther out where no one is.”

Yooperlites are numerous on the shore between Muskallonge Lake State Park (north of Newberry) and Whitefish Point (near Paradise). There seems to be no end to them: Each day, the waves of Lake Superior turn the countless rocks over and over, revealing more each night.

We finally go up over a steep incline in the two-track, a deterrent for anyone not in a truck, and find a spot where no one else is parked. It’s dusk. Erik outfits us each with a C8 Convoy UV Light and two spare batteries. He compares the C8 glow to a “cat pee” light. The difference is striking. “The pee lights don’t work for this,” he says. “They aren’t strong enough. Once you have one of these, though, you don’t want to check your house or you’ll see everything!” 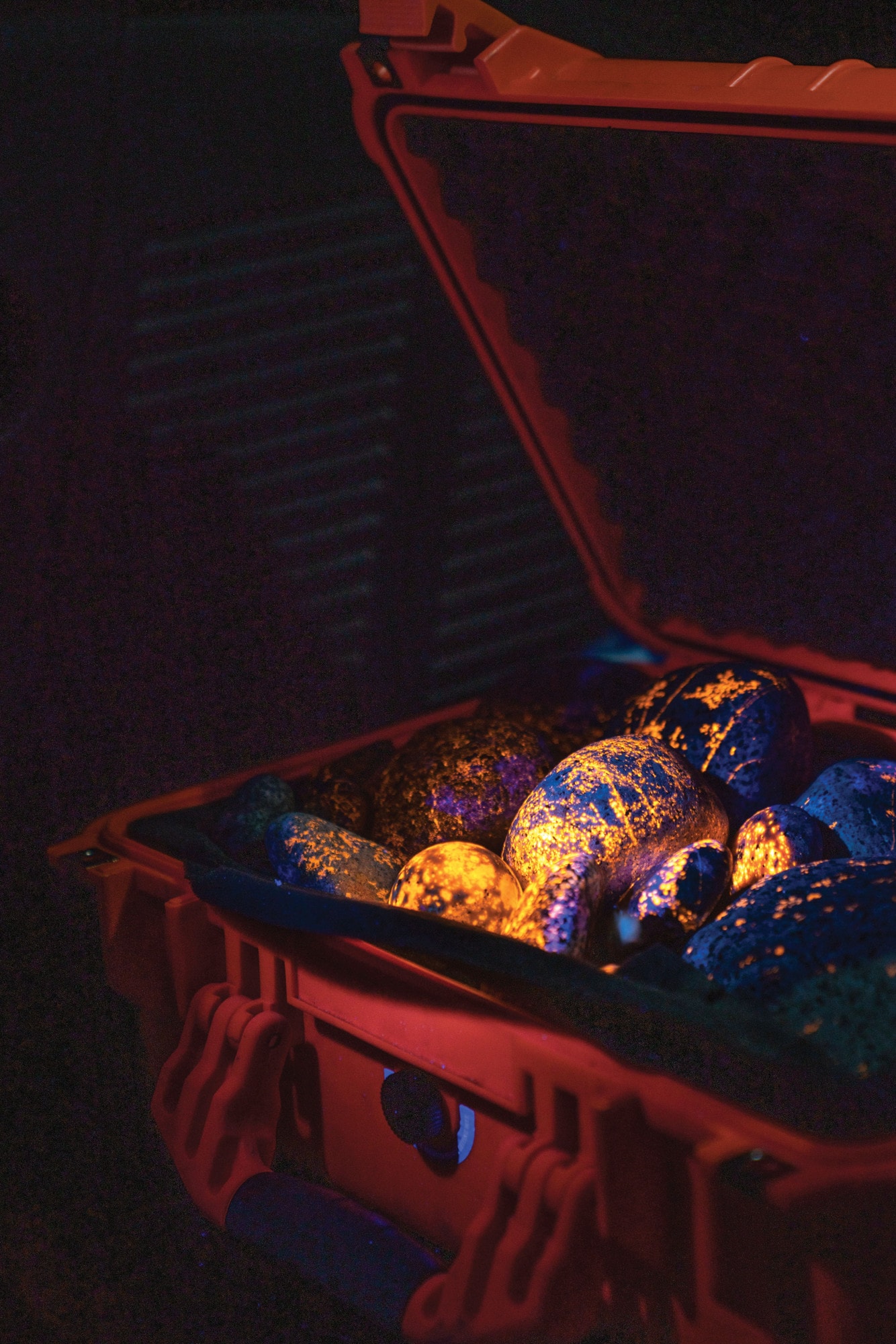 Next, he gives us yellow UV-blocking eye glasses to wear. “You might get dizzy or sick if you don’t wear these,” he says. (Later, we try it without the glasses and he’s right—your eyes start to freak out a bit without the yellow filter.)

Finally, he pulls out several Yooperlites so we know what we are looking for. There are all kinds of patterns and Erik has named them with each new discovery: Snowflake, Flower, Galaxy, Nebula, Gemmy, Saturn, Spray Paint and—he says with a laugh—Jackson Pollock, after the American painter famous for his “splash” technique of pouring paint onto a horizontal surface. The various patterns of Yooperlites all have the tell-tale color: neon orange.

We set off on a foot trail down to the beach. There, we are greeted with the absolute enormity of Lake Superior and the sunset glowing pink to the west. Before we even start looking for Yooperlites, we are struck still. The four-hour trip from Traverse City is already worth it: Grilled cheese, dirt road, sunset.

Erik spikes a glow stick in the sand to mark the trail’s entrance, and places another one down near the beach.

“That way we won’t forget where we walked down,” he says. “Believe me, it gets dark out here!”

This night, however, there is nearly a full moon— much to my delight, and Erik’s dismay.

“The moon is making it too bright,” he says. “It will be harder to see them.”

But his worries turn out to be unfounded.

Within moments, my son, Nelson, has found one. Then another. Then another. We are all finding them—from tiny specs of neon to quarter-sized or- ange-speckled rocks, to Yooperlites as big as an orange.

To say it’s thrilling doesn’t do it justice. We spend the next hour or so walking, laughing, shouting out our discoveries and eventually calming down and spreading out to look in silence. Soon, it’s 10 p.m. I have my family with me, and I marvel that we are walking the shores of Lake Superior at night. It’s unlike anything we’ve ever done.

I grab my husband’s hand and tell him: “Forget looking down for a minute; look up.”

The night is stunning. We can see the Milky Way Galaxy. We can see driftwood casting shadows in the moonlight. We can see freighters’ lights miles and miles out into the Great Lake. 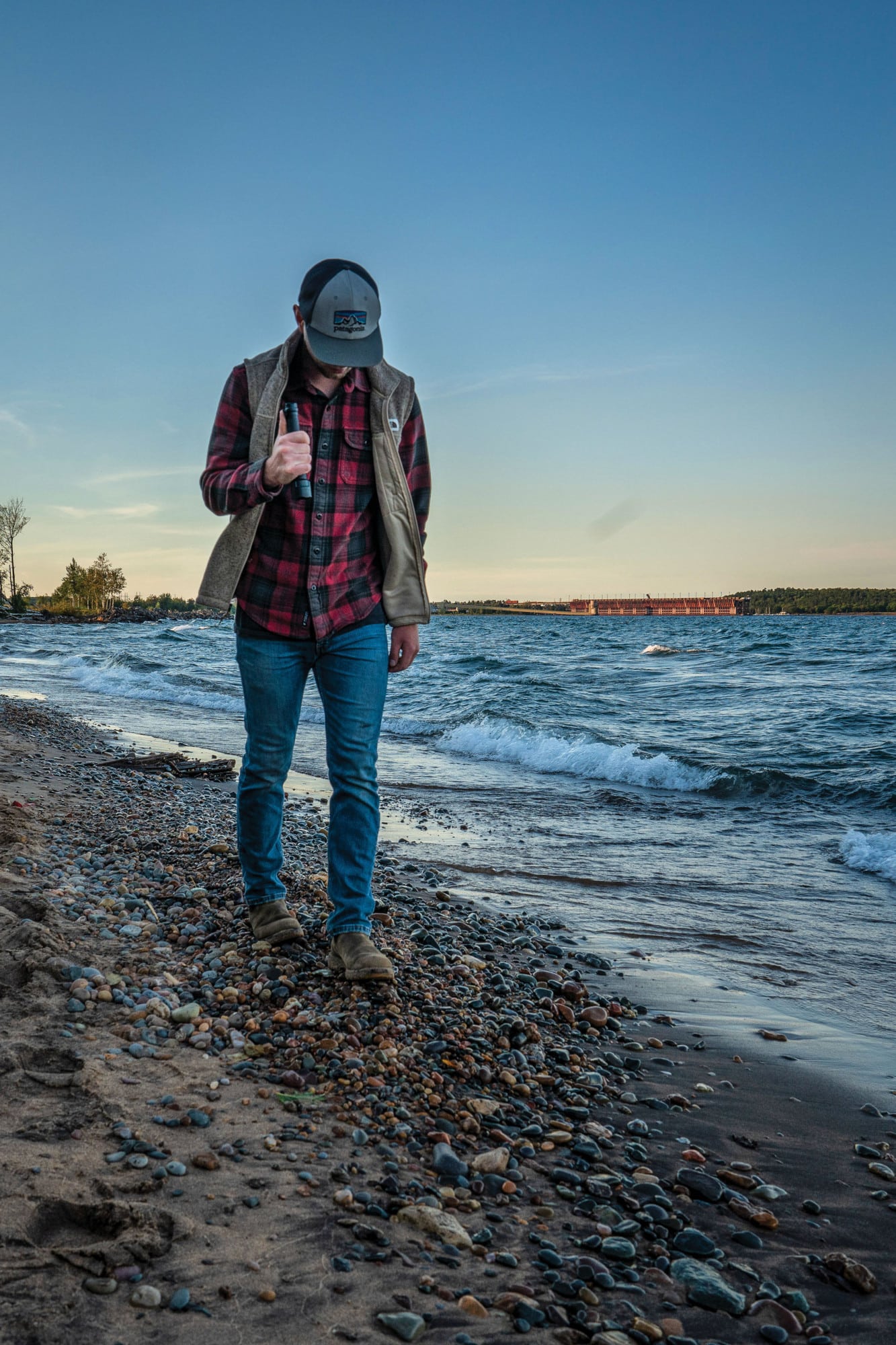 Erik means we will head back when everyone finds just one more. He suggests checking out a rock-laden sand bar just offshore. The water is down 6 inches this year, so we can get to the sand bar with a good leap or the filling of one’s shoes.

“Come on, Mom! Over here!” It’s my other son, Kendall. He has located the narrowest bit of water to leap over and is holding out his hand, coaching me. It’s a stretch, but I go for it, with a yelp. (I add “starry skies and leaps in the night” to my worth-it list.)

Once we are all on the sand bar, some of us wetter than others, we each find “one more.” Erik is happy, too. I can see it in how he enjoys what turns out to be one more hour of hunting. I can feel it when he talks about his story. Last, I can hear it when he stops me short, pointing down, “There!”

I have just stepped over the tiniest Yooperlite ever seen.

“You almost missed it!” he says, pleased to help me, his long, gray beard standing straight out in the Lake Superior wind.

And that’s just it. For Erik, it’s not about the biggest or brightest or prettiest rock. Every rock is a gem. 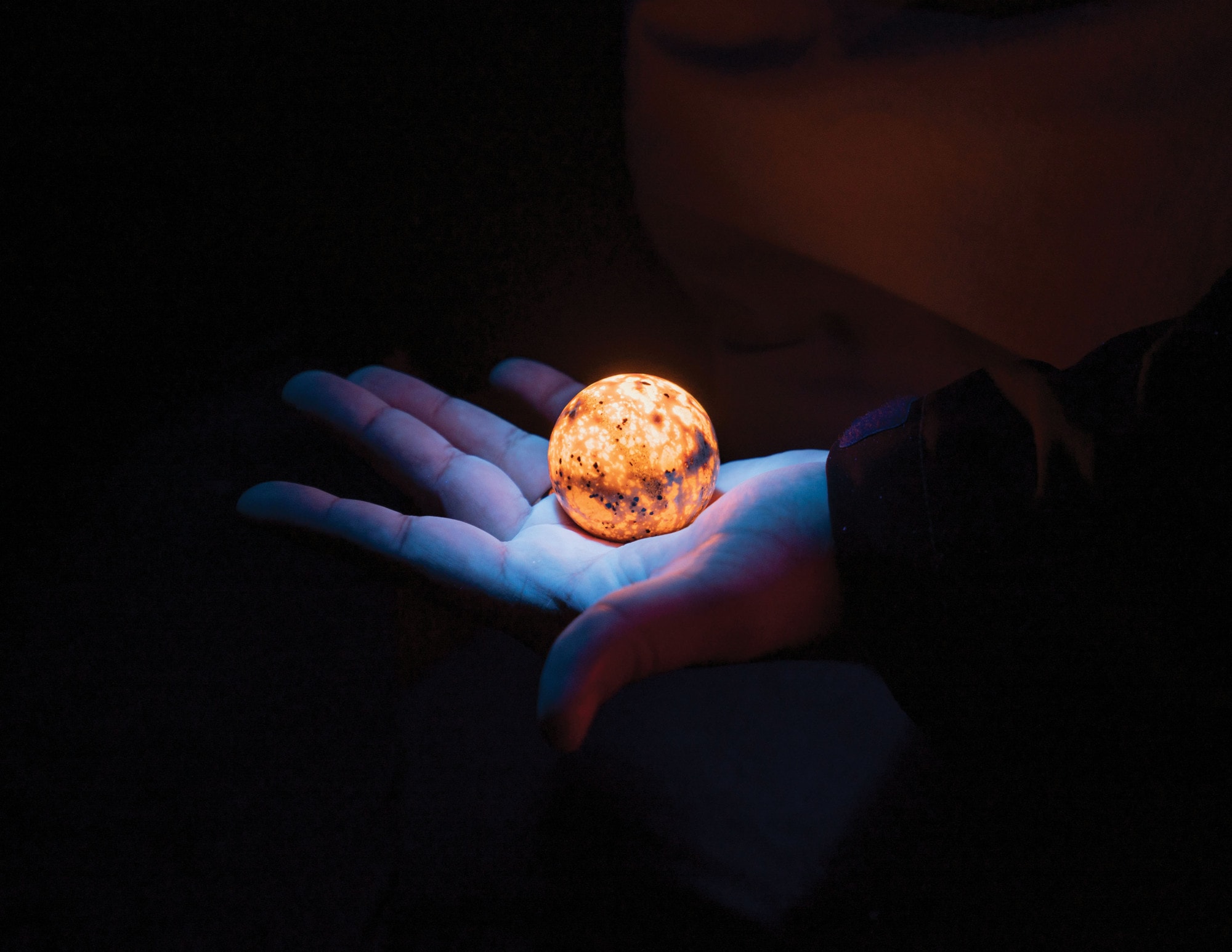 Kandace Chapple is a freelance writer and founder of the Michigan Girl Bike Club. She can be reached at kandacechapple.com.

Ruffa Villota resides in Marquette and focuses mainly on drone landscape and astrophotography. See her work on Instagram: @ruffa_violet 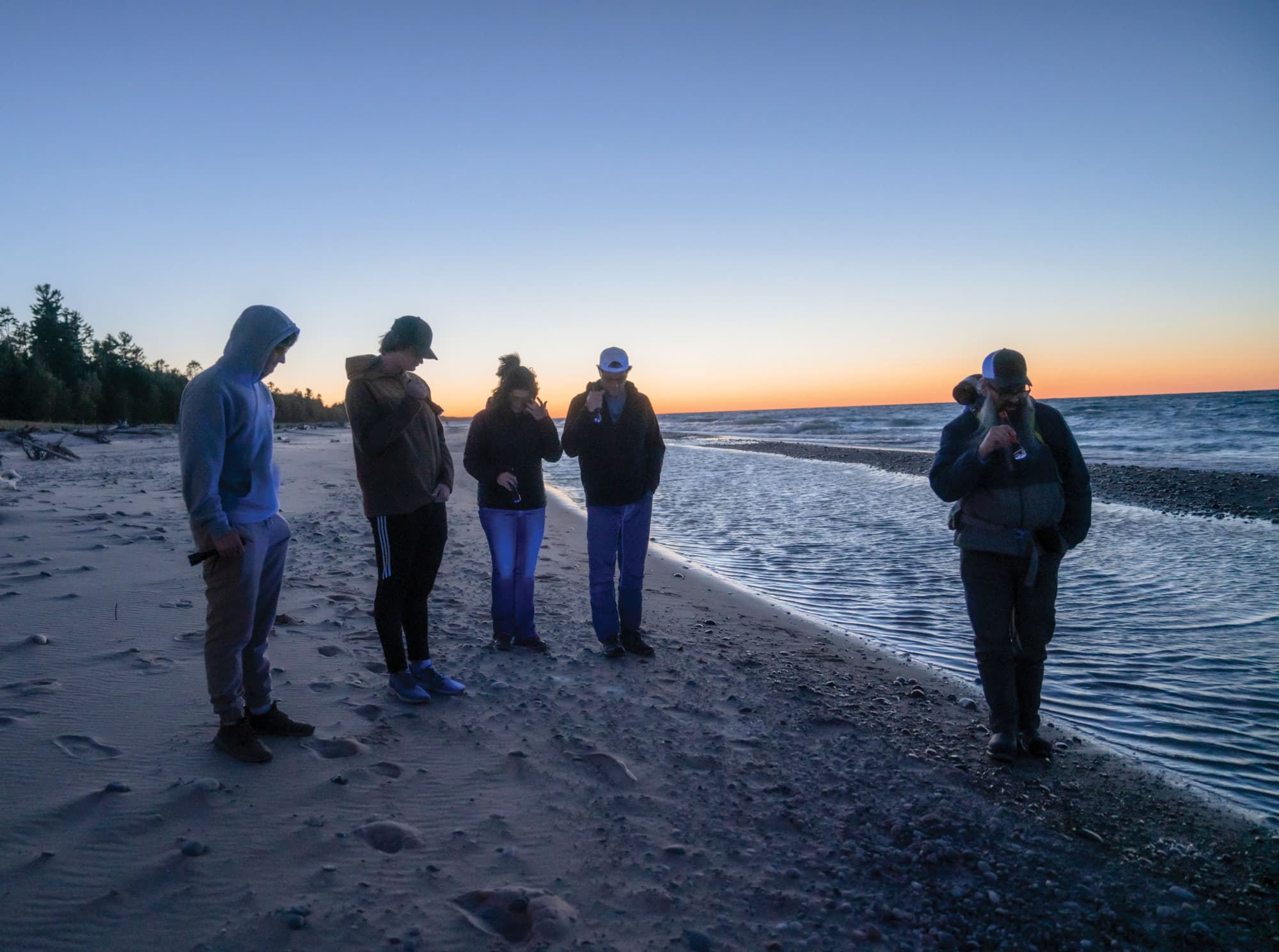 Erik has another claim to fame these days. He was recently featured on the discovery channel after recording mysterious lights over Lake Superior while out Yooperlite hunting.

“There were two or three glowing lights in the sky, and the people on the tour said, ‘let’s get out of here!’” Erik says. “I have to admit it was spooky.”

Erik posted his 12-minute “paranormal” video to his YouTube channel and was soon contacted by several tv shows wanting to investigate the sighting. He was even asked to reenact it for a show in 2021. His sighting recently landed as no. 16 in the top 100 list of the travel channel’s “paranormal caught on camera.”

Since then, Erik has also been invited to several paranormal conferences to speak.

“It’s strange, yes, but I saw it with my own eyes,” he says. “It’s been fun learning more about paranormal sightings now, too.” Though Erik, of course, says he always mentions his first love, Yooperlites, when interviewed about the sighting.