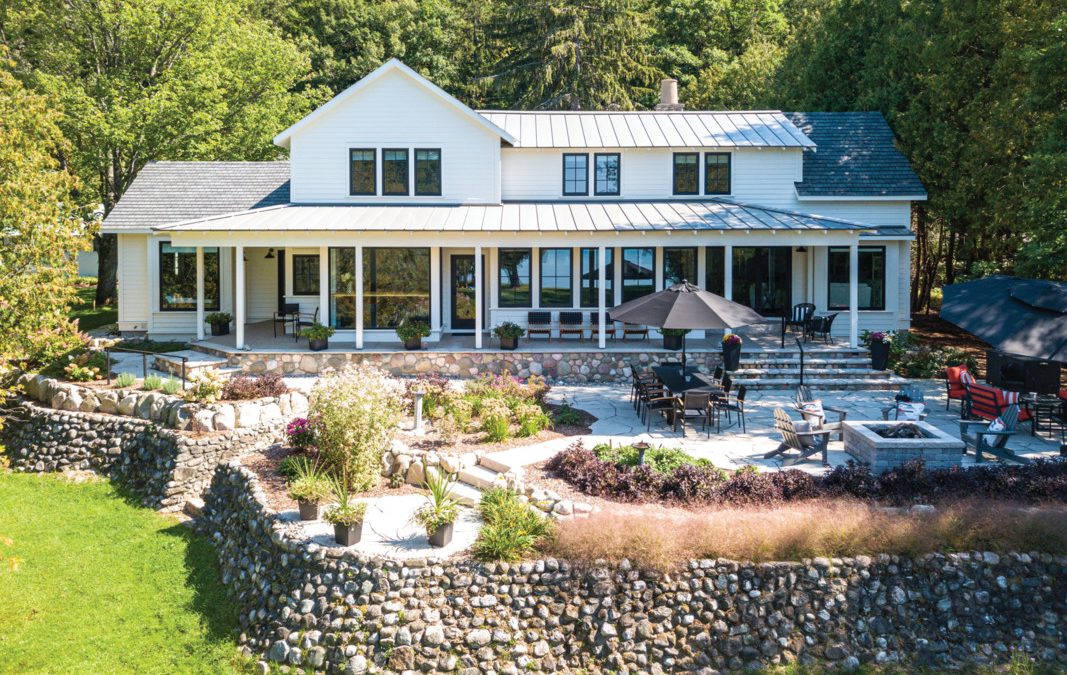 Finding the farmhouse within! A visionary architect and a talented building crew turn this century-old Glen Arbor family cottage on Glen Lake in into a modern, Northern Michigan farmhouse.

With its white clapboard siding and fieldstone chimney, this Glen Lake cottage has always possessed its own quaint charm. Built some hundred years ago by the current homeowner’s great aunt and uncle, the cottage wasn’t winterized until the 1980s—an amenity added by those homeowners who also rehabbed the entire interior and added a two-story addition to make room for their four young children. But as the couple grew into grandparents, there just wasn’t enough room for everyone to be together at the lake. It was time to make more room in the beloved family cottage.

Enter architect Ken Richmond, who was referred to the couple by a friend. On his first visit to the cottage, Richmond was struck by two salient points. The first: The cottage, he says, could have been anywhere. “It had nothing to do with Glen Lake—those old cottages were built for keeping out the elements, not for their views.”

The other point? The kitchen was located on the road side of the house—and not only did it lack a view of the lake, it was also small. “Everyone gathered elbow-to-elbow along a cooking and eating island that ran the length of the kitchen,” says the homeowner. 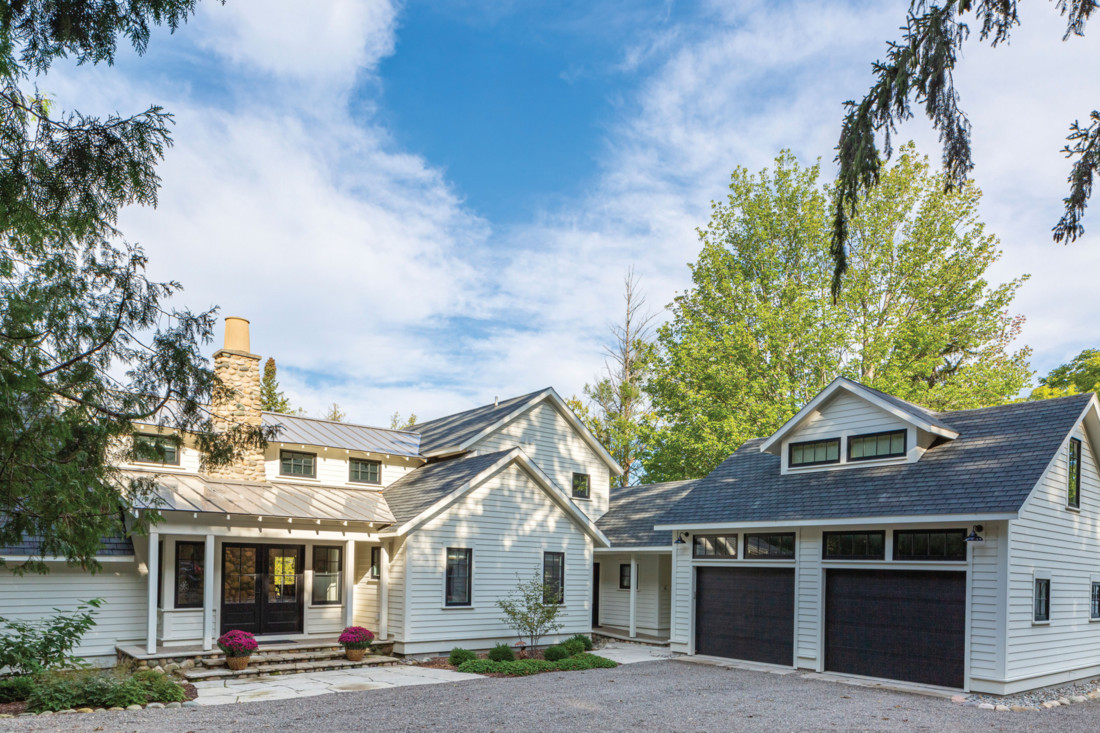 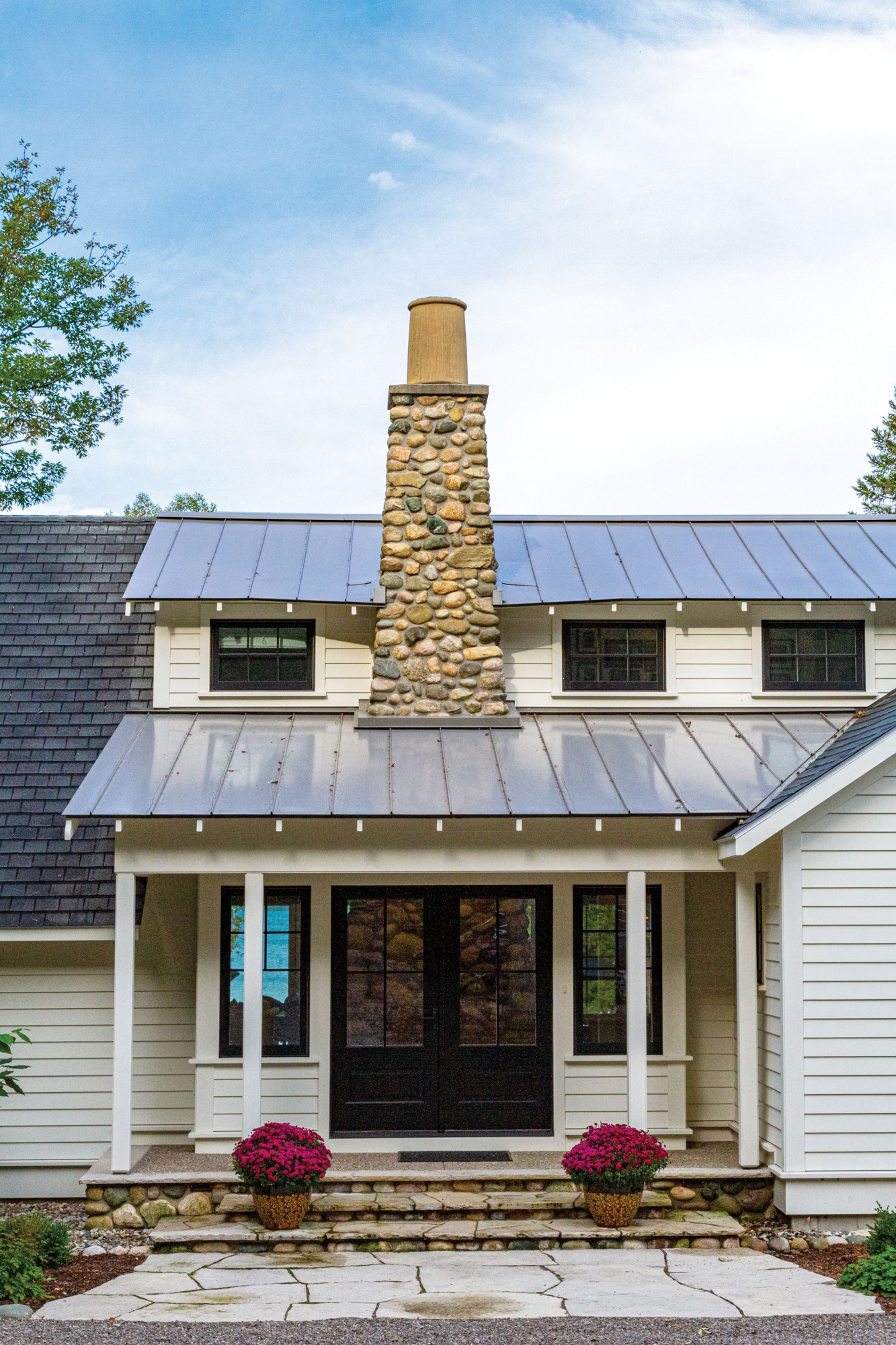 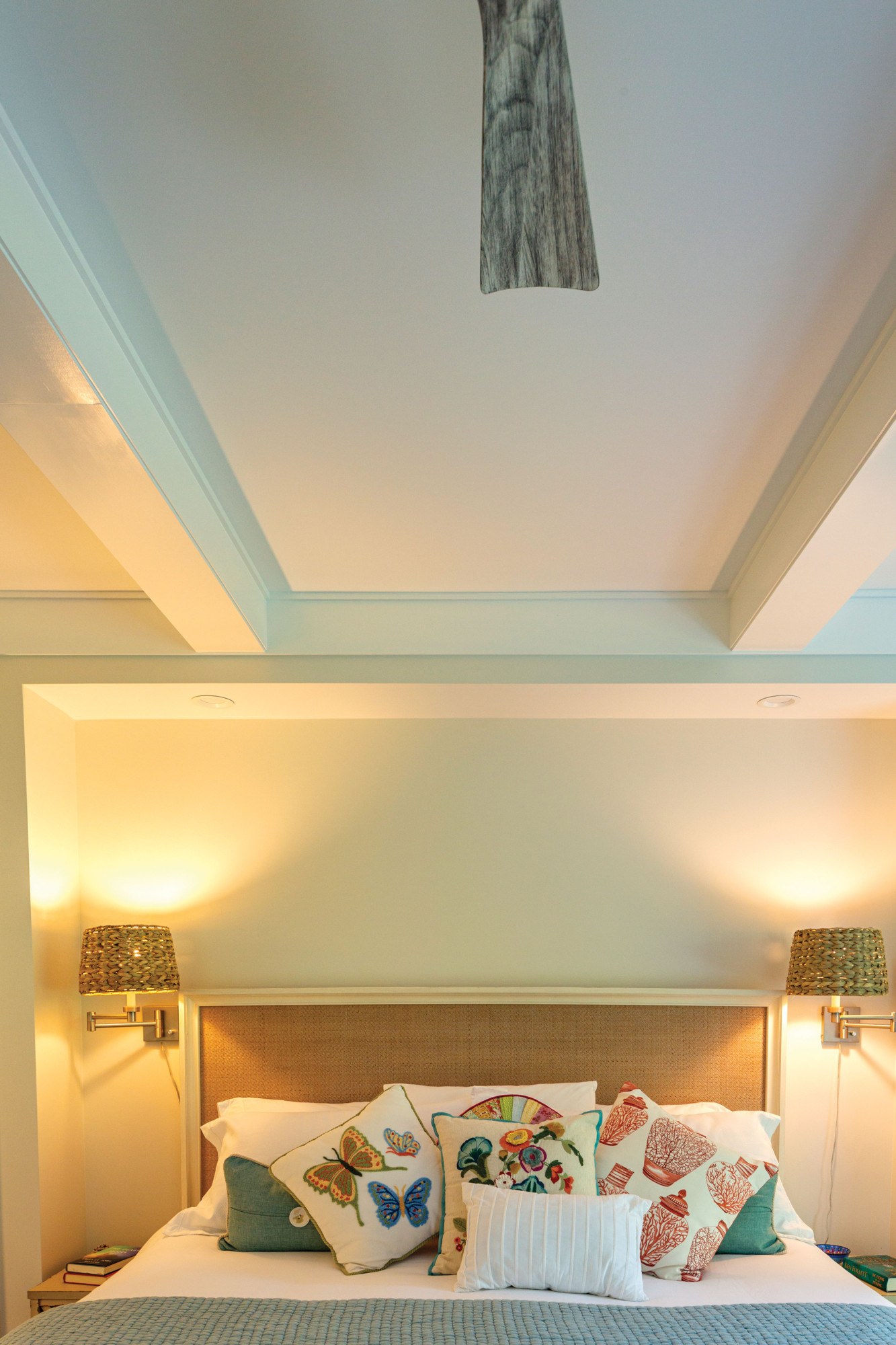 Richmond set to work on a plan that would accommodate the homeowners’ desire for a modern farmhouse aesthetic, give the family more room and re-orient the floor plan to the lake view—which stretches across Big and Little Glen Lakes to take in the Sleeping Bear Dunes on the horizon.

His solutions were ingenious. The obvious thing would have been to add on to the lake side of the home where there is a bounty of lawn. But that would mean destroying two century-old fieldstone retaining walls that encircled the lakeside deck and lower garden terrace. Instead of wasting that authentic asset, Richmond designed an entirely new roadside addition that included an extended front porch, entryway, pantry and two new bedrooms downstairs and two upstairs. With both the old section of the home and the new clad in creamy white clapboard and inset with period-style black framed windows, the exterior is a perfect execution of the modern farmhouse style. 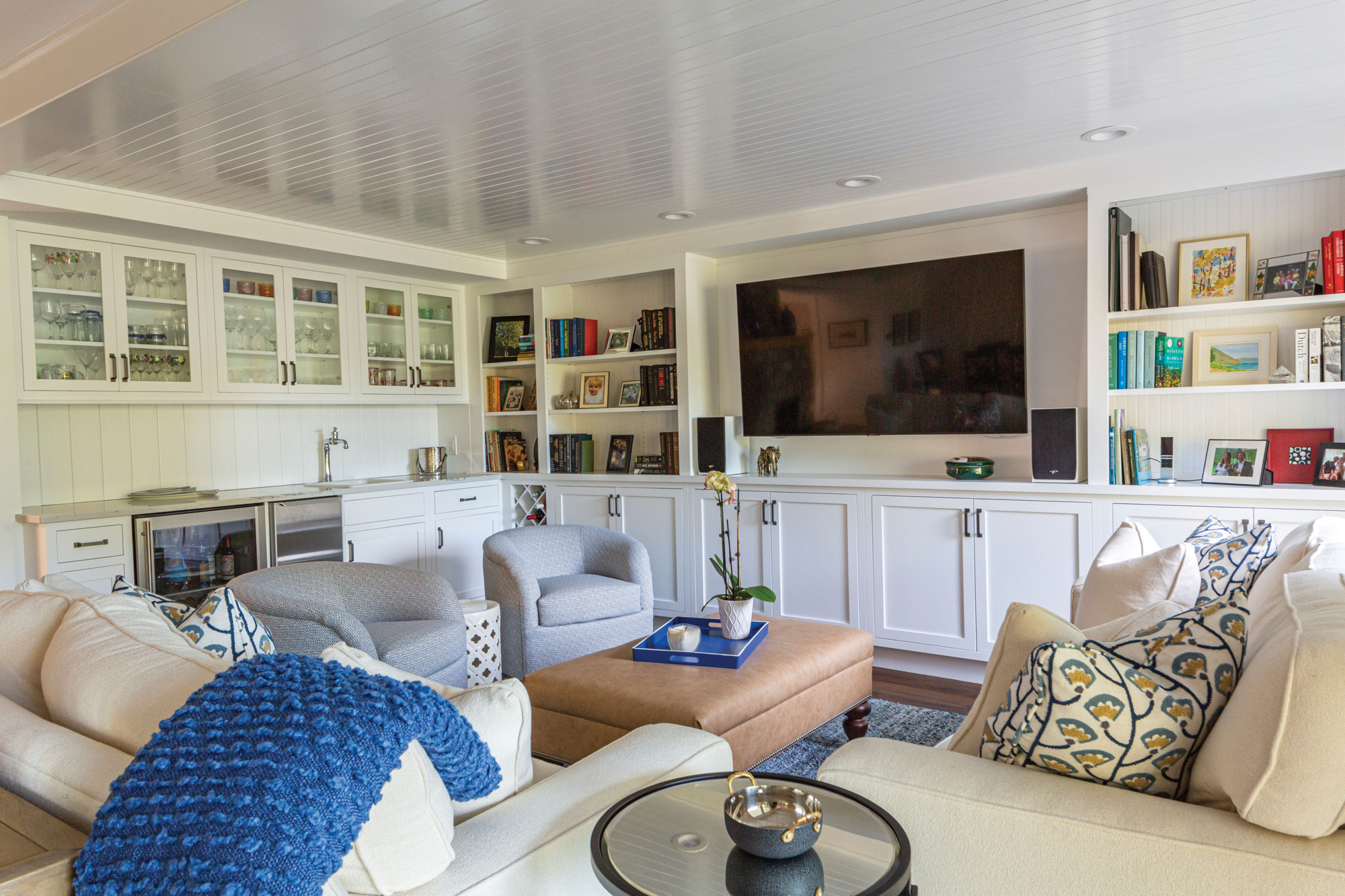 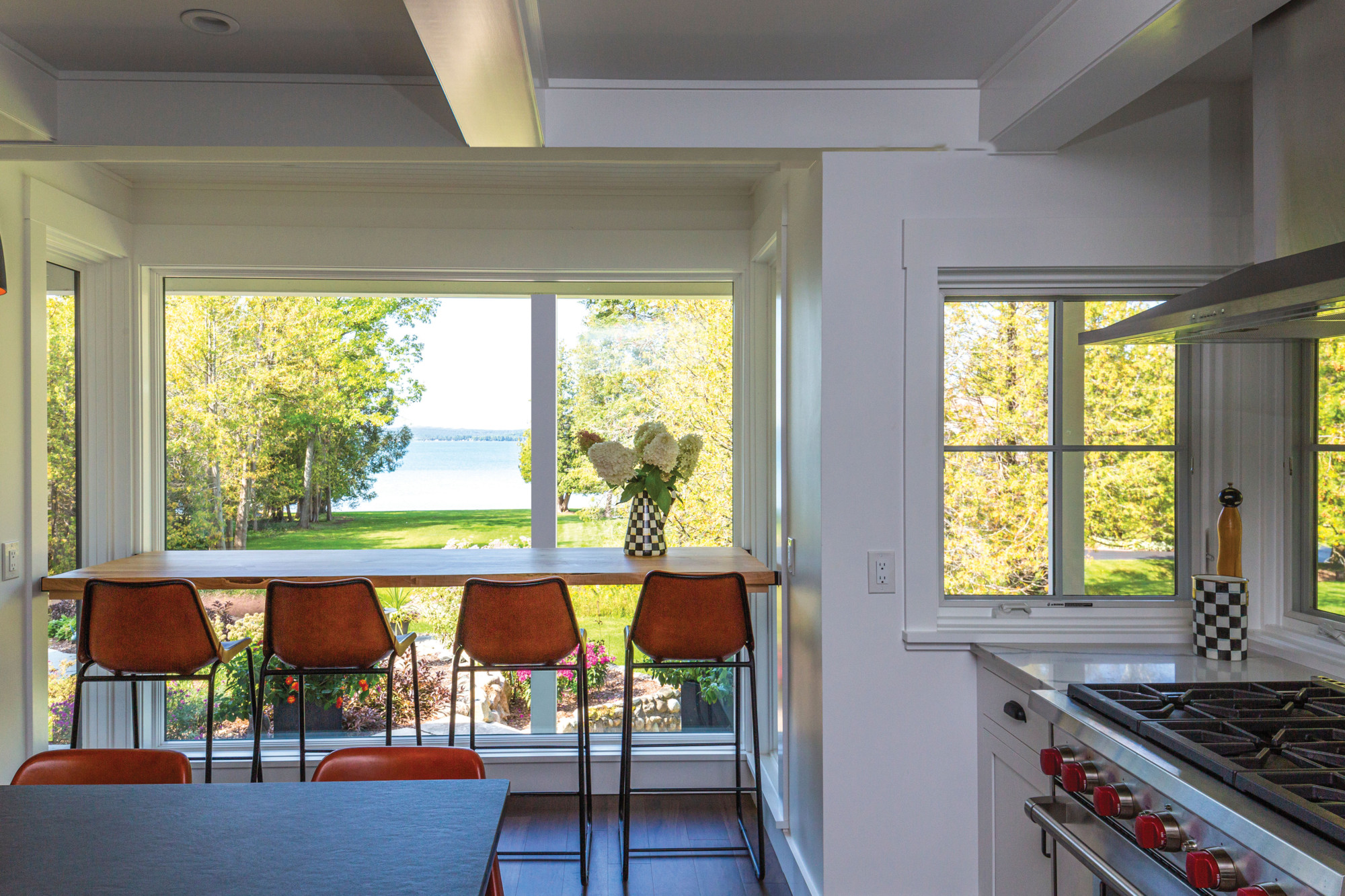 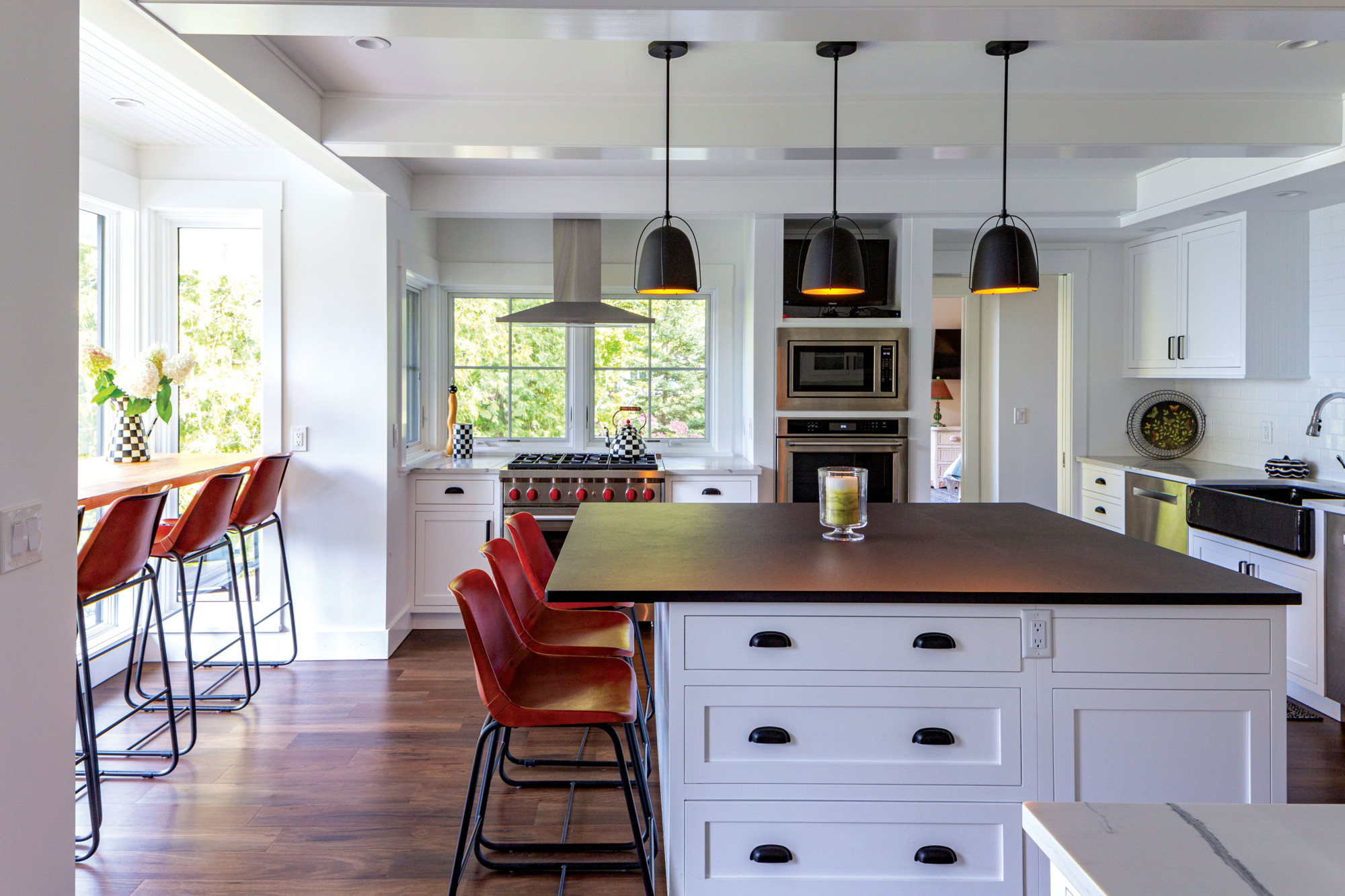 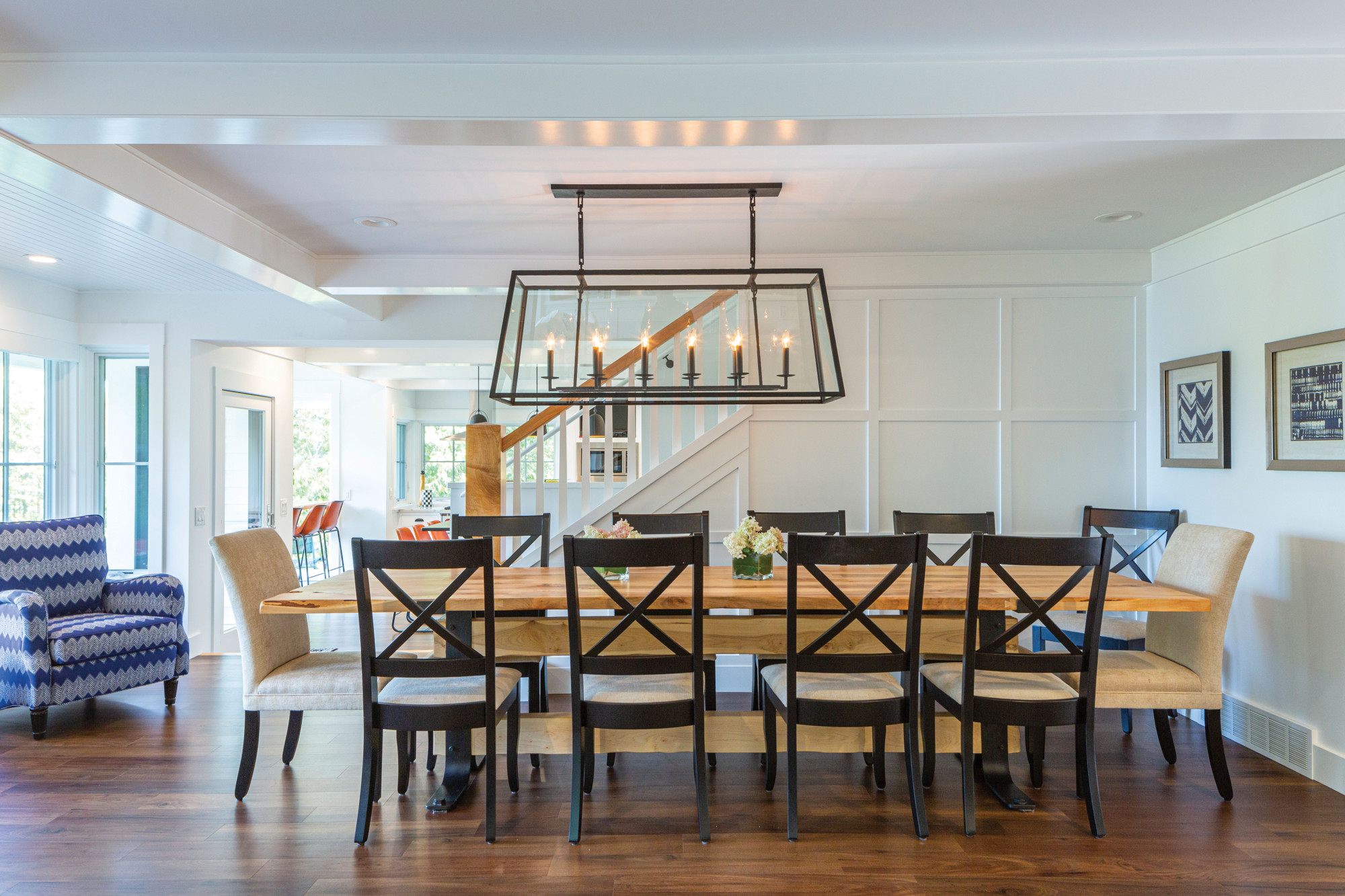 What’s more, instead of destroying the century-old fieldstone chimney, which once ran on the outside of the home from the ground up, Richmond gave the chimney its own place in the new interior plan. Situated about 10 feet inside the new entry, the old chimney is both visually interesting and also a barrier between the entry and the hubbub of the main living area on the other side of it. Peek around either side of the chimney, however, and the sight line leads through the living area, out generous new windows to the lake. The original fieldstone fireplace (where the homeowner’s great aunt and uncle actually used to cook!) tucked into the old chimney sits opposite that view.

The great room that unfolds between those two anchor points is open and airy, with a generous living area and a new kitchen (where the master bedroom once was located).

With the new pantry accessible but hidden, the uncluttered kitchen centers around a large black soapstone-topped island—at last more room for the family to gather! But morning coffee is at the counter set into a new bay window that stretches from floor to ceiling. This bay window counter is topped with a live-edge slab from a maple tree that was taken down to make room for a new driveway. Still more of that maple tree became the staircase newel, the fireplace mantel and a stunning live-edge dining table that seats 12. 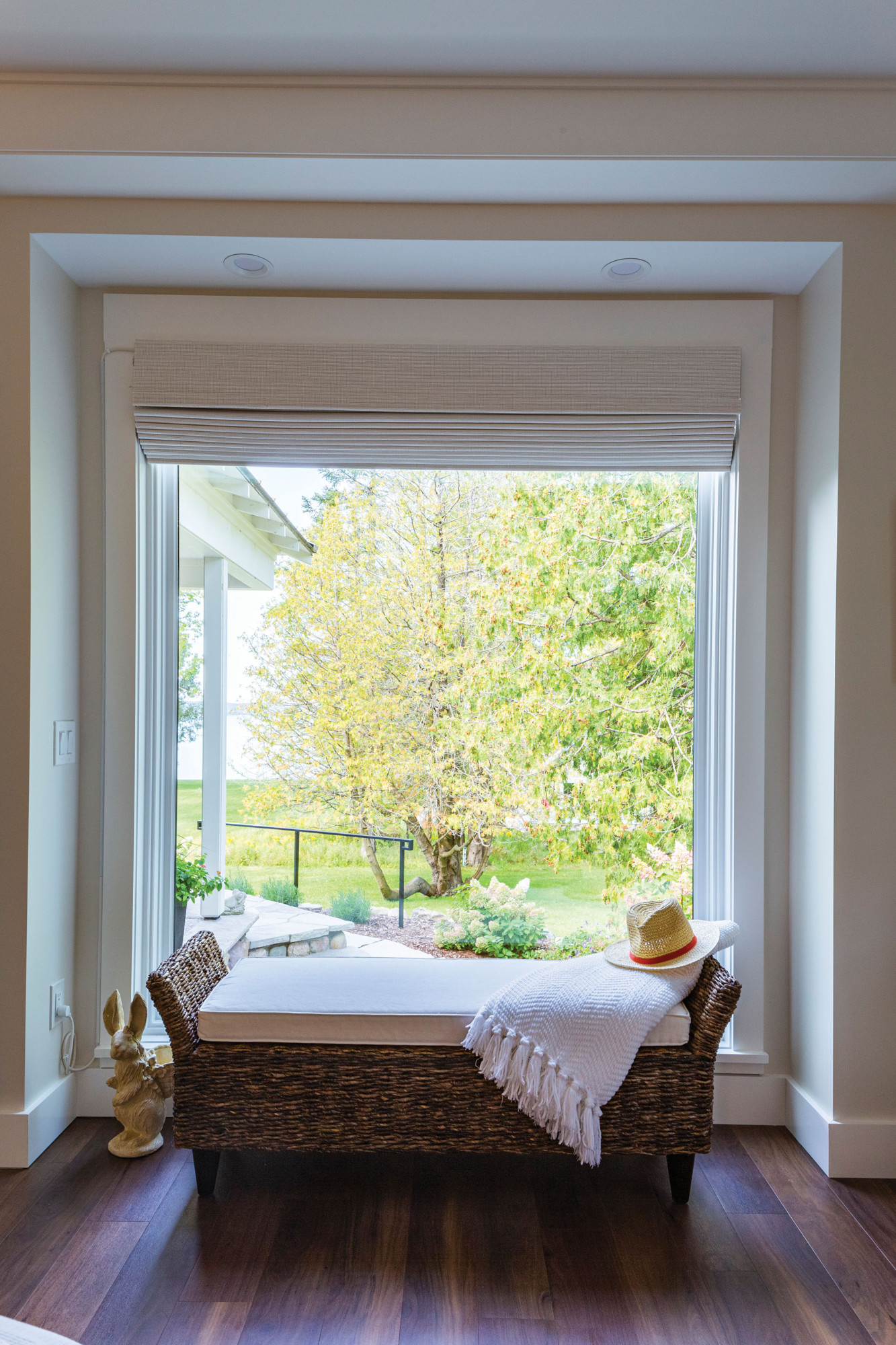 The talented craftsmen of Midlake Builders stepped in with special touches including custom cabinetry, coffered and beadboard ceilings and a square-paneled staircase wall, which adds dimension and interest. Milk-white walls, ceiling and cabinetry and walnut floors harmonize to create this on-point rendition of a modern farmhouse.

Outside, mason Mark Finstad laid a handsome flagstone porch on the terrace between the home and the old upper fieldstone wall, and landscaper Brian Zimmerman went on to create stunning gardens and walkways. The homeowners had the trees trimmed up to amplify the shotgun view that leads across the rolling lawn and lakes to the tawny strip on the horizon that is the Sleeping Bear. With the renovation complete, the best seats for watching the sunset over the Bear on summer evenings are on that porch—a show this family intends to revel in for generations to come. 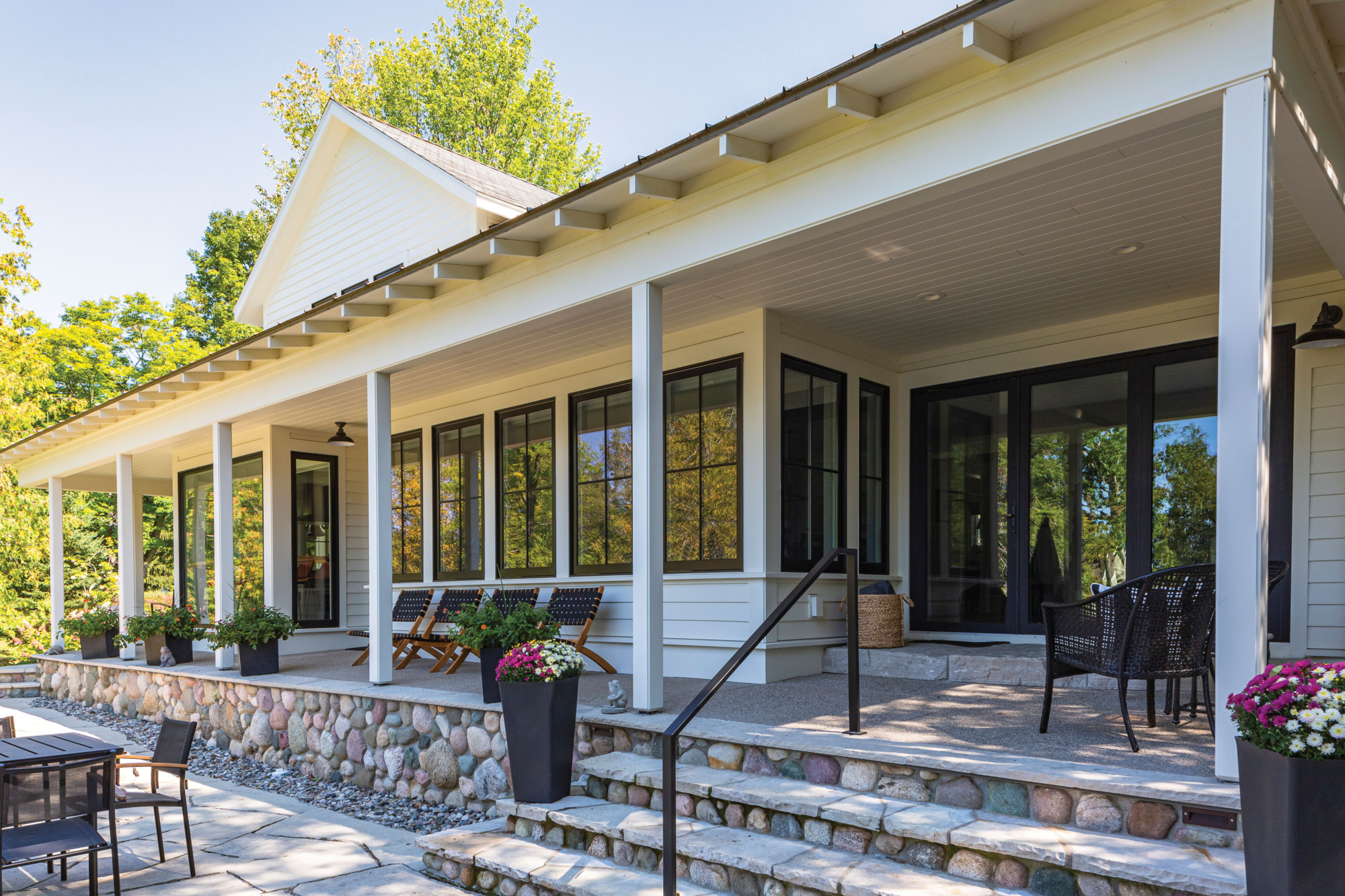 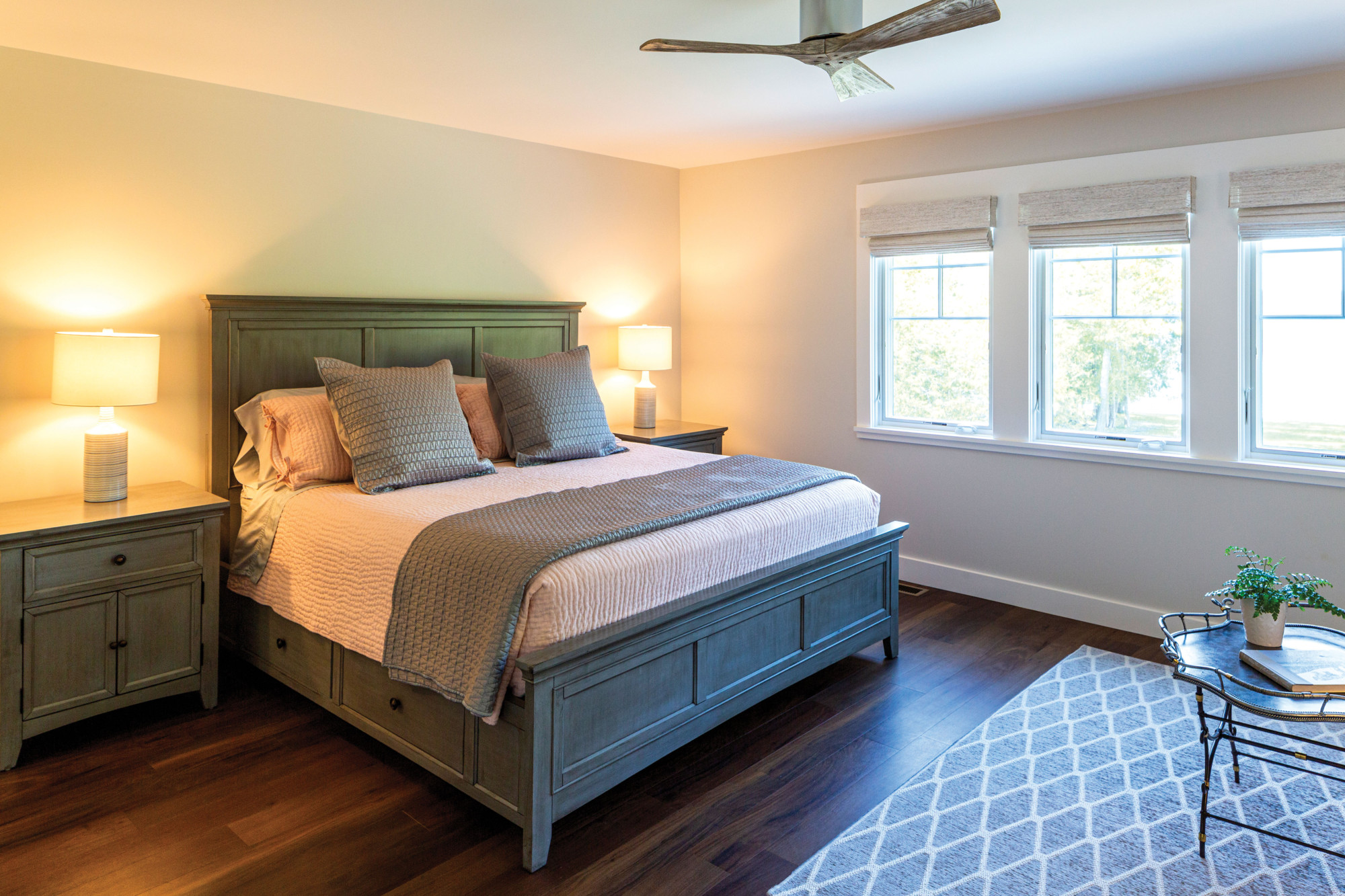 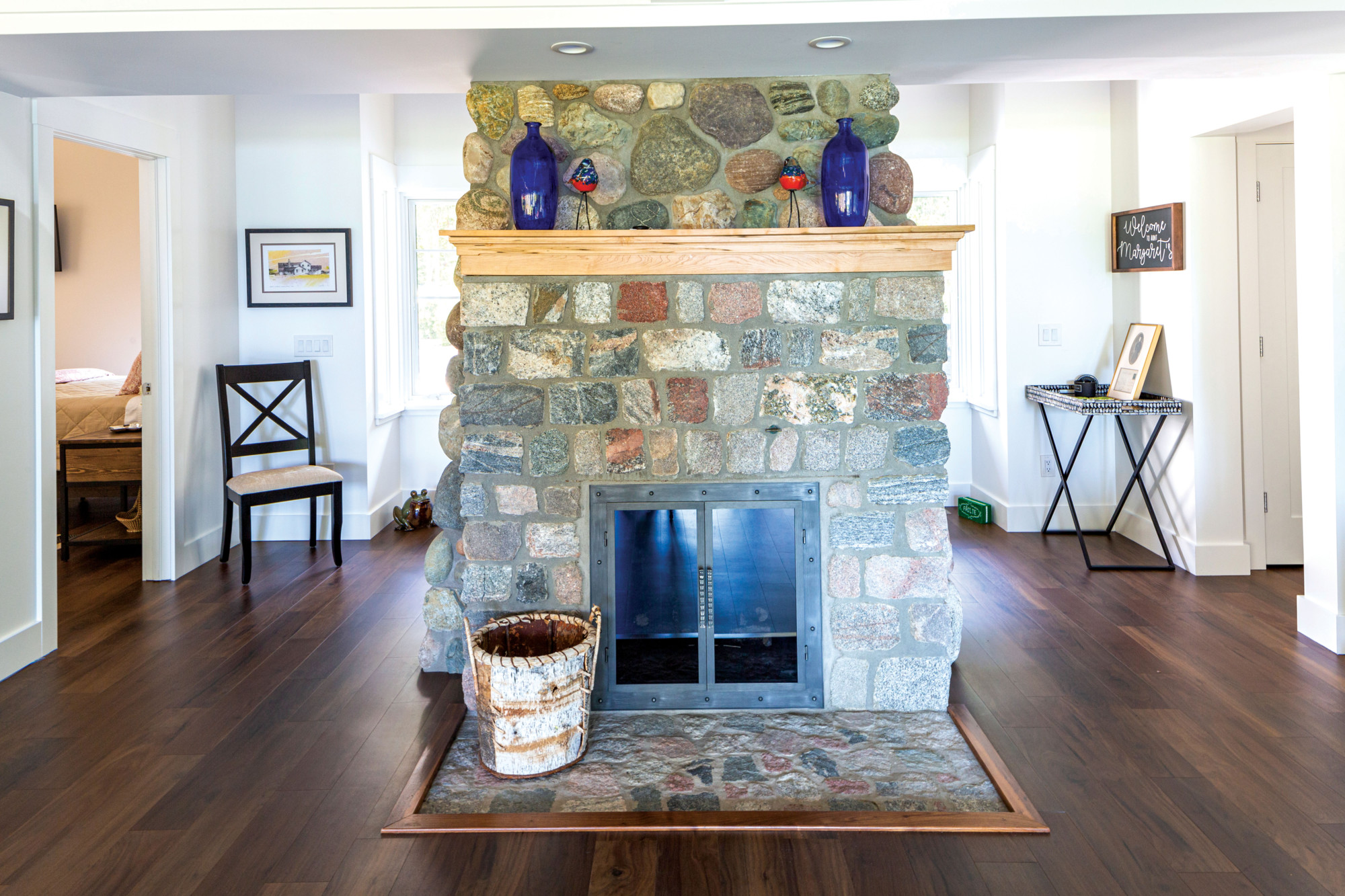