The Empire Asparagus Festival is Returning on June 4 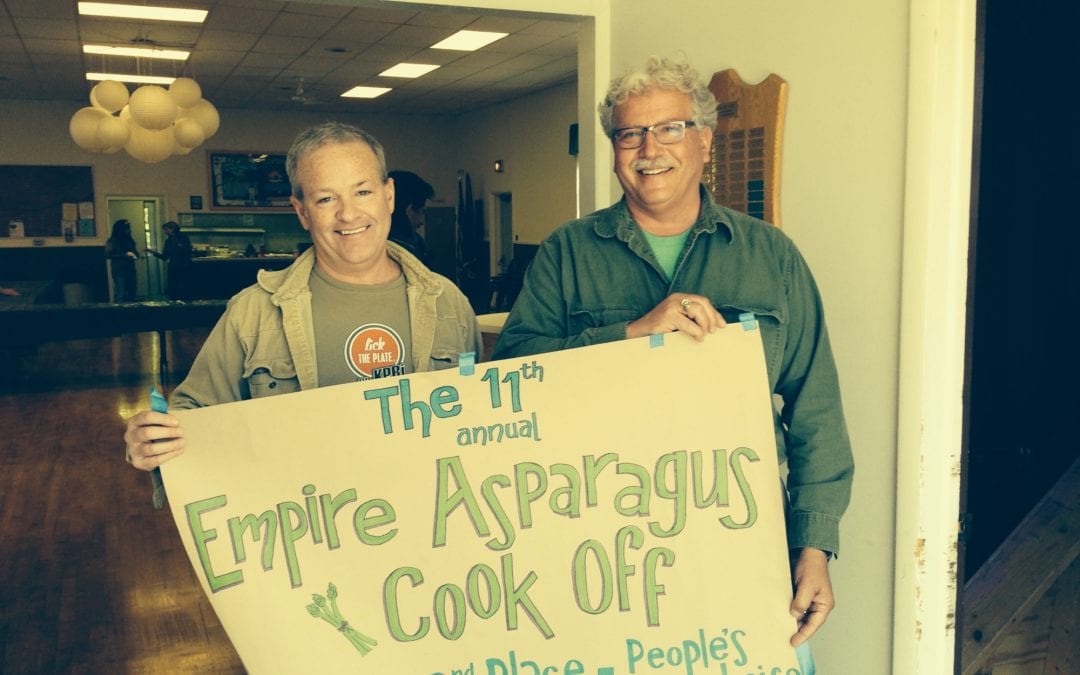 Spring in Northern Michigan brings fresh asparagus. Don’t miss a celebration of the beloved local spear on June 4 at this Empire festival.

Simply put, the Empire Asparagus Festival is my favorite celebration of food, music and community anywhere. Its combination of small-town charm, eclectic entertainment and epic location is hard to top—and one that evokes the fondest of memories.

My history with Empire began with visits years ago to the Empire home and nearby cherry orchard of my brother, Gerry Boylan. When my show “Lick the Plate” was picked up by a Detroit radio station, the Asparagus Festival became the first destination. That experience led to my immersion in the festival as a judge in the recipe contest.

Event producer Paul Skinner co-founded the festival in 2004 with Ashlea Walter, and he became my go-to guest fixer for the show and an invaluable resource over the years. Paul also owns The Misers’ Hoard in the heart of Empire, which is a must-stop when visiting. As Paul explains: “The festival started as a way to raise awareness of the local farming industry and the profile of Empire. The first year we had a modest crowd of around 50 people, sold five gallons of asparagus soup and had a car show with four entries … one of which didn’t run.” 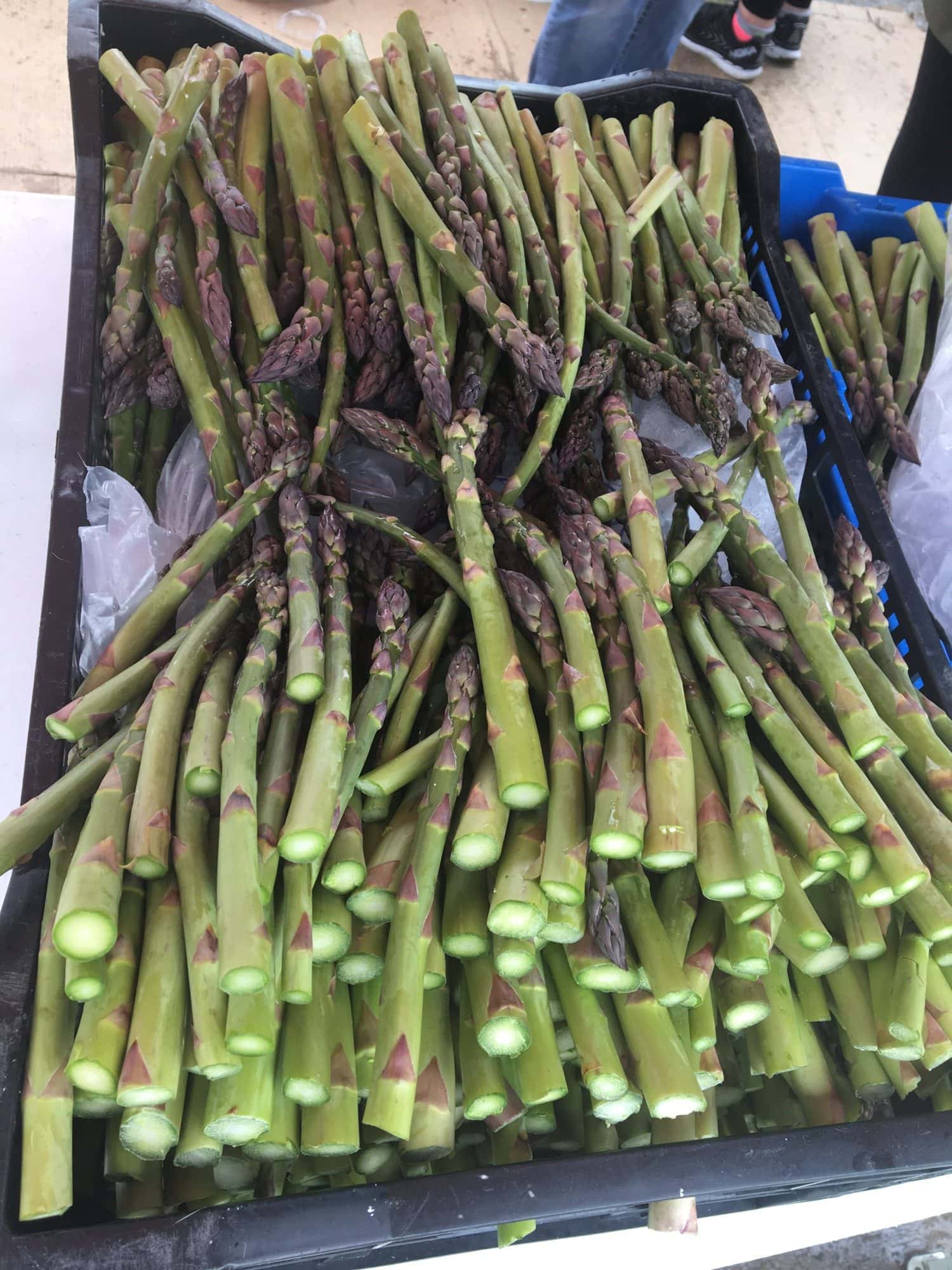 Related Read: On The Table May 2022: Freshly Foraged Asparagus Tart.

When I started attending in 2014, those numbers had increased dramatically with 20-plus vendors, multiple bands over two nights and the famous Kick Yer Ass-para-gus 5K. The amazing fresh asparagus is provided by local growers, including Norconk and Harris farms. In my opinion, Michigan grows the best asparagus in the country, and it’s the number two producer, only behind California.

Michigan’s world-class asparagus was the star of the festival recipe contest I’ve had the honor of judging on several occasions. Held in the community center, it had the feel of something straight out of Prairie Home Companion. Dozens of recipes were submitted, all tasted by the lucky judges who joined me including Cre Woodard, a local landscaper, and Dave Early, who taught at Interlochen. Besides the recipe contest, most vendors incorporated the beautiful spear in their offerings, some quite creatively, like Right Brain Brewery, who infused it in their craft beer. My all-time favorite came from Phil Deering, owner of the since-closed Deering’s Market in Empire. His asparagus bratwurst is one of the best things I’ve ever eaten, in any category. And while Deering’s is no longer open in Empire, Phil is now working at Oryana West, and last year made his amazing brats available there during asparagus season. Of course, Art’s Tavern always has a significant presence at the festival, and their deep-fried asparagus is a crowd-pleaser. I also experienced my first fish boil at the festival, which included Lake Michigan whitefish, potatoes, carrots and cabbage—it was a delight. 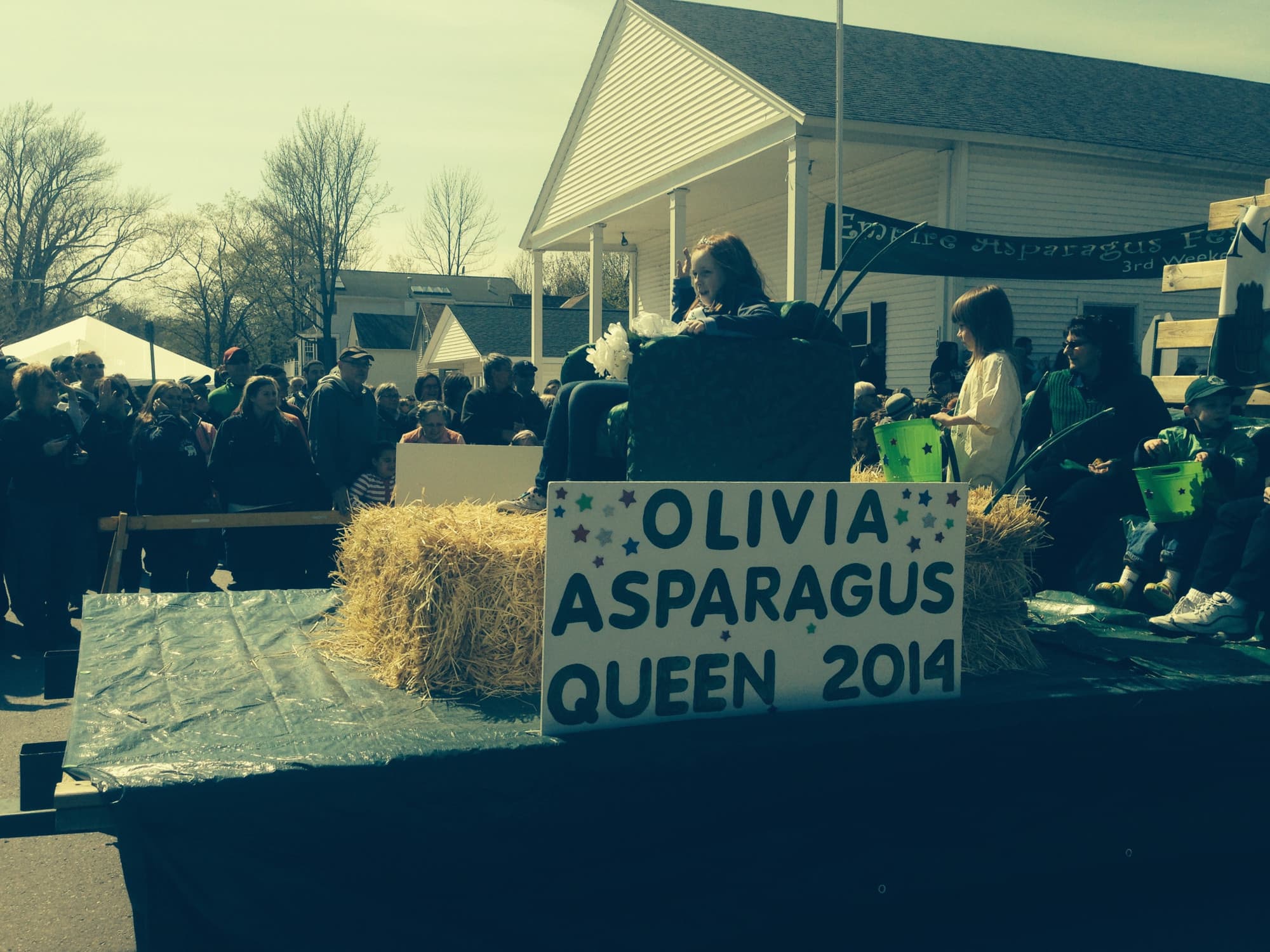 The music memories generated from the festival are equally special and have included then up-and-coming Accidentals, future Grammy Award-winning Billy Strings, Jack Pine, and the crowd-pleasing, dance floor-filling Zydeco sounds of the Benzie Playboys, to name a few.

The Kick Yer Ass-paragus 5K is also a yearly highlight, including the very steep climb up Wilco Road and an incredibly scenic course starting and finishing at Empire Beach Village Park. It’s a relatively low-tech race with an emphasis on having fun. Past events have also included a literary twist, with the “Ode to the Asparagus” poetry reading, and a parade that, while over in a blink of an eye, is part of the joy of this special festival. And while I’m not quite yet an Empire local, my home in Suttons Bay gives me much easier access to this glorious event; I can’t wait to partake again this year.

After a two-year hiatus, the festival is back in a modified, one-day format on June 4. For all the details, check out empirechamber.com/event/asparagus-festival.

David Boylan has hosted and written Lick the Plate, a culinary, culture and music-focused radio show, podcast and column for the past 15 years in San Diego, Detroit and Traverse City. He divides his time between Suttons Bay and Encinitas, California, where he spends as much time as possible surfing, fishing and storytelling.