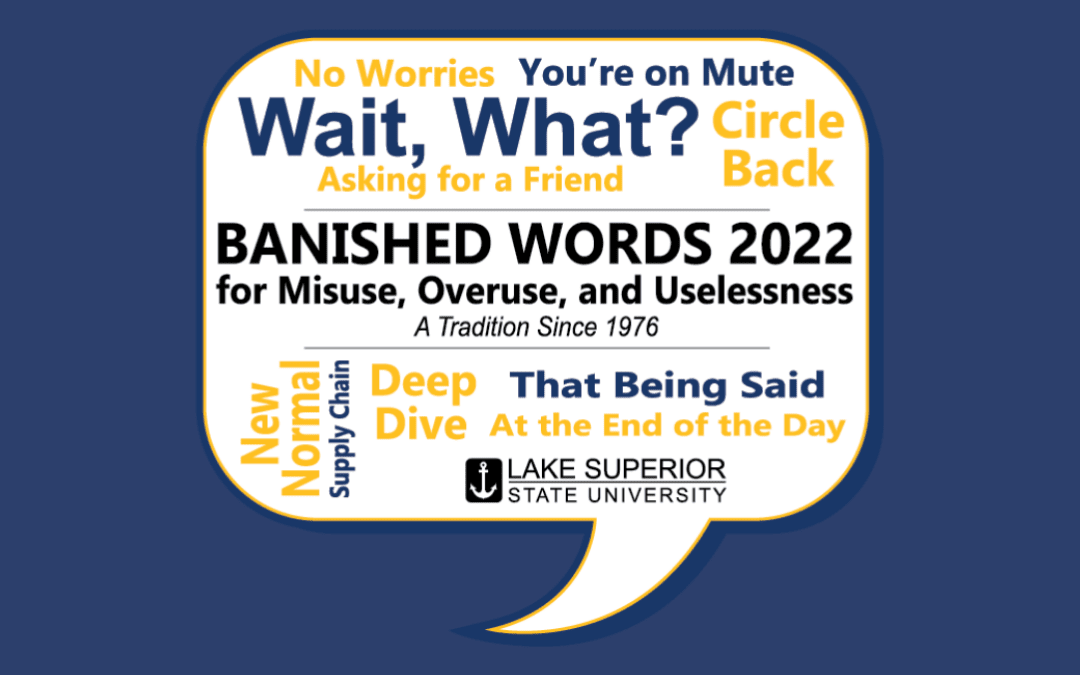 Wait, What? No Worries. Northern Michigan’s Lake Superior State University is banishing these 10 familiar words and terms for 2022.
Mass communication? Miscommunication! If you’re going to turn to the vernacular to make yourself known, be sure you’re accurate and concise. Avoid error in and exploitation of everyday language. In short, do the opposite of what the public and the media did this year.

The irked and the amused from around the country and across the world sent that mock-serious message in their entries for Lake Superior State University’s annual tongue-in-cheek Banished Words List. LSSU announces the results of the yearly compendium on Dec. 31 to start the New Year on the right foot, er, tongue.

Common parlance dominated submissions for the past 12 months. More than 1,000 of the 1,250-plus nominations of words and terms for banishment for misuse, overuse, and uselessness for 2022 were colloquial.

The No. 1 offender: “Wait, what?” These two four-letter words should not go together under any circumstances, according to many nominators and the contest judges from the LSSU English Department, because the two-part halting interrogative is disingenuous, divergent, deflective, and other damning words that begin with the letter d.

“Also, seven of the 10 words and terms that LSSU banished last year reflected real-world concerns about COVID-19, while three could be categorized as quotidian. This year, as the global pandemic persists along with adaptations to it, the inverse occurred. Seven of the 10 words and terms to be banished are more conversational-based, with the other three applying to the coronavirus,” he added. “One possible takeaway from all this about the act and art and science of disclosing something is the more things change, the more things stay the same. At the very least, it’s complicated.”

LSSU has compiled an annual Banished Words List since 1976 to uphold, protect, and support excellence in language by encouraging avoidance of words and terms that are overworked, redundant, oxymoronic, clichéd, illogical, nonsensical—and otherwise ineffective, baffling, or irritating. Over the decades, LSSU has received tens of thousands of nominations for the list, which now totals more than 1,000 entries. Examples of the winners (or should that be losers?) to make the yearly compilation: “detente,” “surely,” “classic,” “bromance,” and “COVID-19,” plus “wrap my head around,” “user friendly,” “at this point in time,” “not so much,” and “viable alternative.” The Banished Words List has become such a cultural phenomenon that comedian George Carlin submitted an entry that made the annals in 1994: “baddaboom, baddabing.”

This year, nominations came from most major U.S. cities and many U.S. states, on top of Norway, Belgium, England, Scotland, Australia, and numerous provinces in Canada. Here are the list of the banished words and terms for 2022 and the reasons for their banishment:

Related Read: 12 Northern Michigan Events this January to Kick-Off Your 2022.

1. Wait, what?
Most frequently found in text or on social media, this ubiquitous imperative question is a failed “response to a statement to express astonishment, misunderstanding, or disbelief,” explained a wordsmith. “I hate it,” added another, because the command query is an inexact method to convey the utterer’s uncertainty or surprise. “I don’t want to wait,” either, continued the second impassioned nominator. Misuse and overuse.

2. No worries
Nominated by writers nationwide for misuse and overuse, this phrase incorrectly substitutes for “You’re welcome” when someone says “Thank you.” A further bungling relates to insensitivity. “If I’m not worried, I don’t want anyone telling me not to worry,” a contributor explicated. “If I am upset, I want to discuss being upset.” Despite its meaninglessness, the term is recommended to emailers by Google Assistant.

3. At the end of the day
Twenty-plus years after original banishment of this phrase in 1999, the day still isn’t over for this misused, overused, and useless expression. “Many times things don’t end at the end of the day—or even the ramifications of whatever is happening,” observed a sage. Others consider “day” an imprecise measure. Today? Present times? Banishment in 1999: overused synopsis of a conversation or debate, often by politicians and pundits.

4. That being said
Nominators cited this phrase as verbal filler, redundant justification, and pompous posturing. For instance, “however” or “but—even “that said”—does the job as a transition instead of the wordiness. “Go ahead and say what you want already!” demanded one entrant. That being said, its usefulness is certainly in doubt. As a commentator philosophized, “At the end of the day, if you will, it already has been.”

5. Asking for a friend
Misuse and overuse through deceit—because the friend is a ruse. This cutesy phrase, often deployed in social media posts in a coy attempt to deter self-identification, isn’t fooling anyone. Paraphrasing one sage, “Once used to avoid embarrassment, as in, ‘Do you know a good proctologist? I’m asking for a friend.’ Sometimes an occasional sitcom joke. Now an overused tag with absolutely no relationship to its antecedent.”

6. Circle back
Treats colloquy like an ice skating rink, as if we must circle back to our previous location to return to a prior subject. Let’s circle back about why to banish this jargon. It’s a conversation, not the Winter Olympics. Opined a grammarian, “The most overused phrase in business, government, or other organization since ‘synergy’”—which we banished in 2002 as evasive blanket terminology and smarty-pants puffery.

7. Deep dive
“The only time to dive into something is when entering a body of water, not going more in-depth into a particular subject or book,” admonished a petitioner. Another stipulated that people who float the phrase aren’t near pool, lake, ocean, or sea; thus, rather than dive deeply, they flounder shallowly. An editing whiz wondered, “Do we need ‘deep’? I mean, does anyone dive into the shallow end?”

8. New normal
Overused catchall for ways COVID-19 affects humankind—and banishment finalist last year for similar reasons. “Those clamoring for the days of old, circa 2019, use this to signal unintentionally that they haven’t come to terms with what ‘normal’ means,” a monitor elucidated. “After a couple of years, is any of this really ‘new’?” another speculated. Banished in 2012 for imprudence, defeatism, and apathy stemming from societal missteps.

9. You’re on mute
People switched from in-person exchanges to virtual meetings to follow the social distancing protocol of COVID-19, and the unwitting deafening silence happens on both sides of the camera. Overuse and uselessness, then, due to ineptitude. A discerning submitter encapsulated the issue: “We’re two years into remote working and visiting. It’s time for everyone to figure out where the mute button is.” Or as a quipster summarized, “Hello? Hello?”

10. Supply chain
Word-watchers noticed the frequent, unfortunate appearance of this phrase toward the end of this year as the coronavirus persisted. “It’s become automatically included in reporting of consumer goods shortages or perceived shortages. In other words, a buzzword,” concluded one analyst. “Supply chain issues have become the scapegoat of everything that doesn’t happen or arrive on time and of every shortage,” noticed another. The adverse result: overuse ad nauseam.

“Say what you mean and mean what you say. Can’t get any easier, or harder, than that,” said LSSU President Dr. Rodney S. Hanley. “Every year submitters play hard at suggesting what words and terms to banish by paying close attention to what humanity utters and writes. Taking a deep dive at the end of the day and then circling back make perfect sense. Wait, what?”

For more about the Banished Words List and to nominate a word or term for banishment for 2023, go online to lssu.edu/banishedwords.

Lake Superior State University is one of Michigan’s most affordable public universities with One-Rate at Lake State tuition for all. Surrounded by three Great Lakes, LSSU is an unsurpassed location for research, innovation, and real-world experiences. Signature programs include fisheries and wildlife management, engineering, nursing, criminal justice, business, robotics engineering, fire science, and kinesiology. In 2019, Lake State launched the first cannabis chemistry program in the nation. LSSU also was the first campus nationwide to offer an accredited four-year fire science program; it is one of three in the U.S. LSSU was the first campus nationwide to offer an accredited four-year robotics engineering technology program and is the only university nationwide to offer undergraduate education in industrial robotics. LSSU also offers several certificate programs, including a one-year culinary arts chef certificate at its 5,000 square-foot, state-of-the-art Les Cheneaux Culinary School in Hessel. Regional centers are in Escanaba, Iron Mountain, and Petoskey. LSSU opened its newest location in St. Helen in 2020. Additional LSSU hallmarks include the annual Banished Words List that receives worldwide media coverage and a student-run Atlantic salmon hatchery at its renowned Center for Freshwater Research and Education. LSSU’s NCAA Division I hockey team has won five national championships; men compete in five other sports and women in six at the Division II level. Lake State was founded in 1946 in Sault Ste. Marie, the oldest city in Michigan (1668), on the site of the former U.S. Army’s Fort Brady. Lake State has approximately 2,000 undergraduate students, with 88 percent coming from Michigan, and with every county represented. Ninety percent of full-time students receive financial aid.