A Year of Gorgeous Sunrises from Michigan’s Upper Peninsula 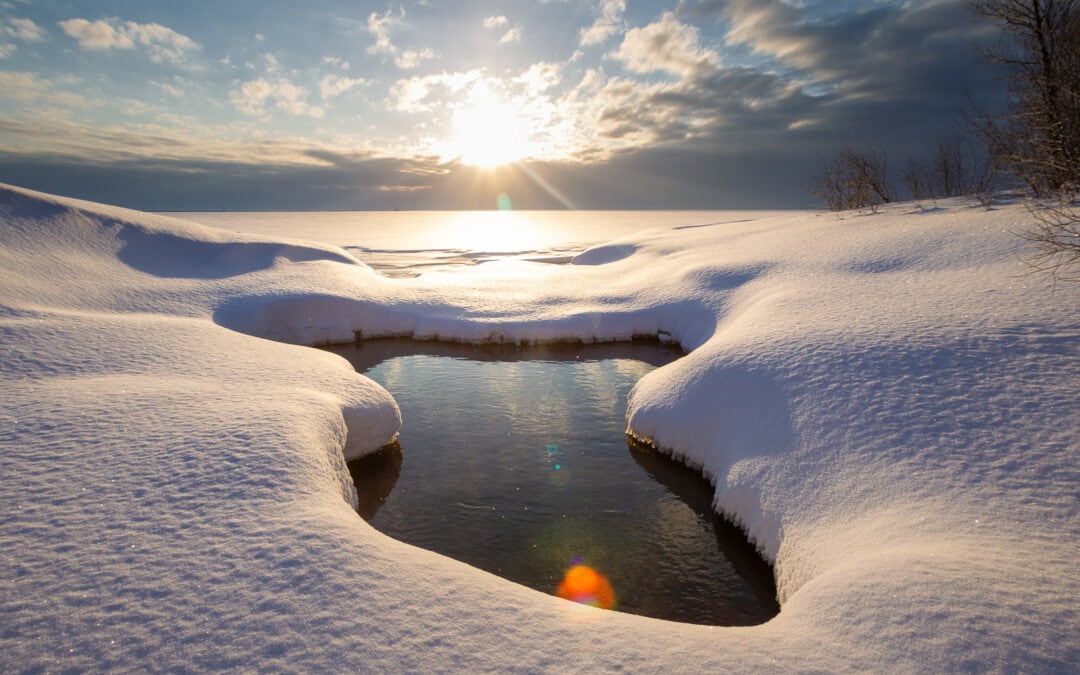 Watch every sunrise for a year. That was Bugsy Sailor’s resolution in 2019. Three years and more than 1,000 sunrises later, he’s still greeting every day.

Before we talk sunrises, you should get to know Bugsy: Baraga born, Michigan State graduate, entrepreneur and eternal optimist. Bugsy owns the Upper Peninsula Supply Co. in downtown Marquette, a tiny shop that he affectionately calls a micro-business, selling U.P. goods and merchandise designed by him, his friends and area artists. “It’s all very locally driven, and we’ve always had a mission of celebrating the Upper Peninsula and finding unique ways to do so,” Bugsy says.

Unique indeed. For starters, Bugsy invented Plaidurday. The international holiday for plaid began in 2011 and is held each year on the first Friday of October. He also created 906 Day, in honor of the U.P.’s area code, celebrated annually on Sept. 6. (Get it? 9/06.)

“There’s always been a piece of this that’s literal in some sense of putting the Upper Peninsula on the map,” he explains. “Making sure we’re not forgotten as part of the state, which frequently happens.” (Remember when Mountain Dew thought the U.P. was a part of Wisconsin in 2019? Yeah, seriously. After the oopsie, Mountain Dew contacted the U.P. Supply Co. to create an exclusive Upper Peninsula label, which became the 51st in their national Dewnited campaign.)

“I ended up studying sociology as one of my degrees and the Upper Peninsula has always had such a distinct identity that is unique across the country,” Bugsy adds. “There’s no real rat race in Marquette or the U.P. It’s got its own pace of life. Its own lifestyle. It’s low-key and authentic. I choose sunrises to embrace the outdoors, but everybody has their method of embracing this place. Whether it be skiing or fishing and the list goes on.” 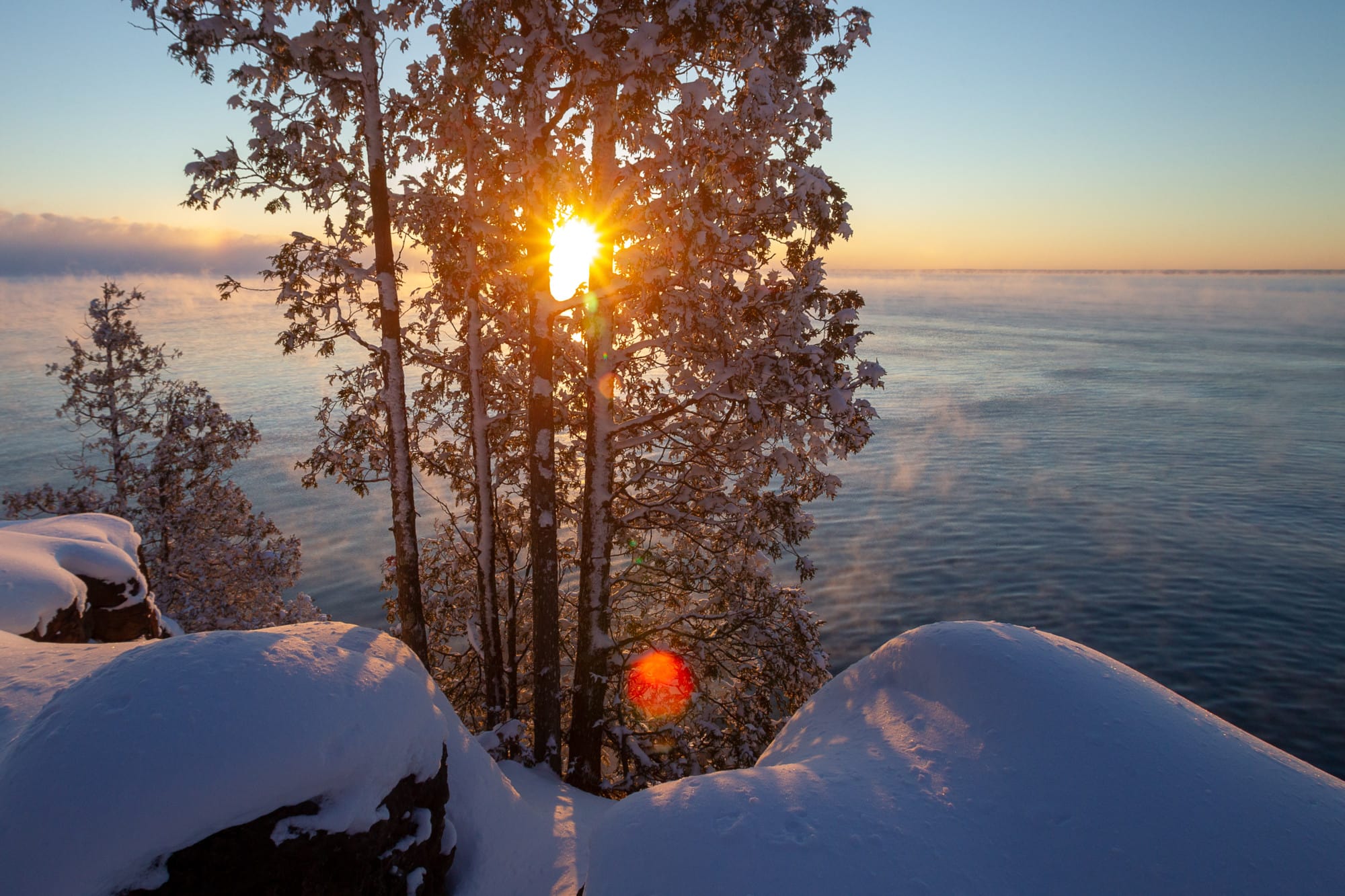 Related Read: Searching for your next outdoor adventure? Visit our Northern Michigan Outdoors page to get planning!

So, about those sunrises. Bugsy has experienced and photographed every single one in 2019, 2020 and 2021, sharing his photos on social media—and he’s not stopping yet. Follow him on Facebook or Instagram @bugsysailor. 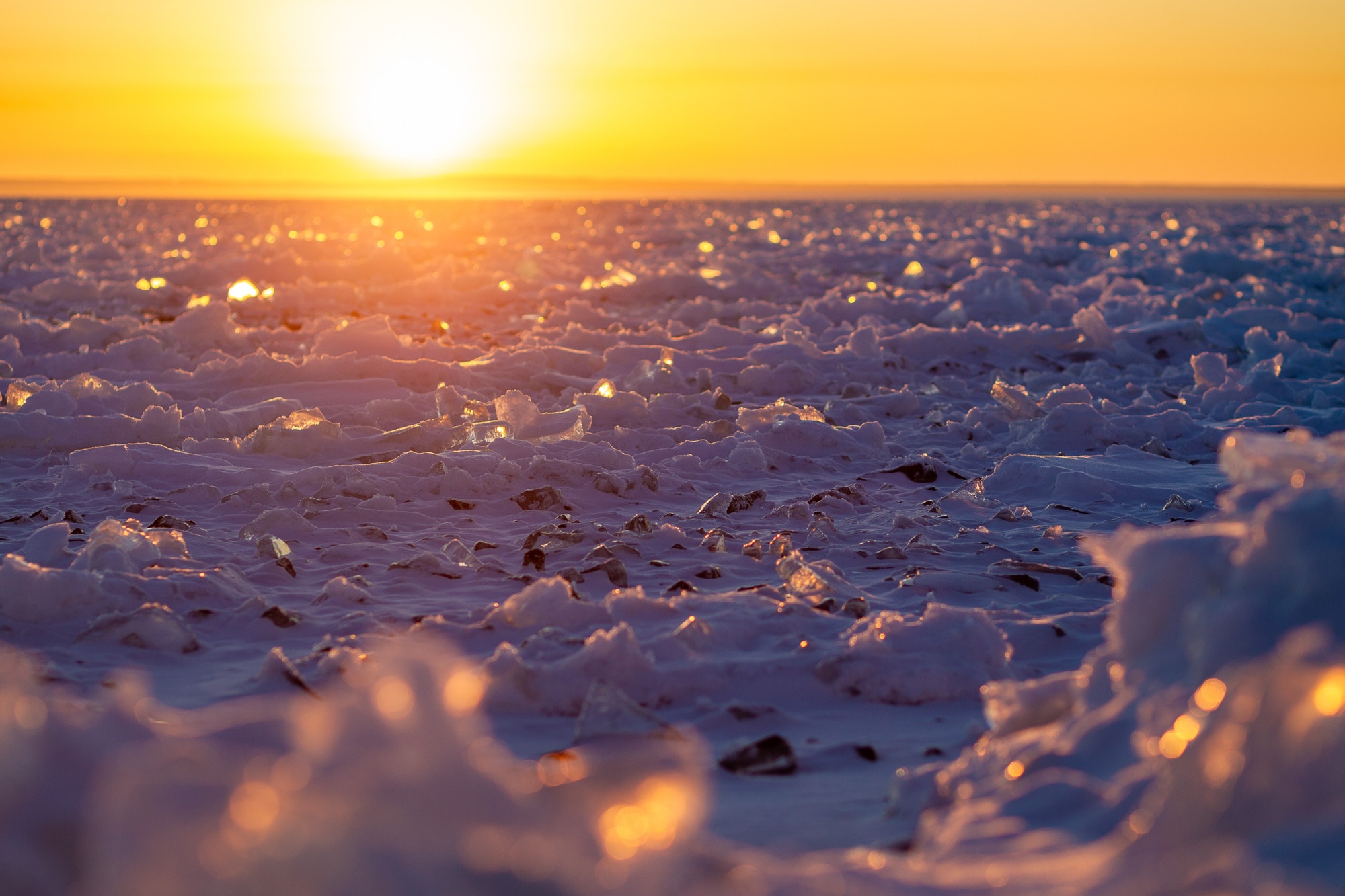 Related Read: Go Dog Sledding Through the Wilds of The Upper Peninsula.

Q. Tell us how the project got started.
A. About six or seven years prior [to 2019], I would do a little road trip and photograph the first sunrise of the new year every Jan. 1 and loved it. Then I realized from one Jan. 1 to the next, I hadn’t seen many sunrises during the year, so it inspired the resolution of watching every sunrise of 2019.

Q. In an interview with Marquette Today, you said, “The sun still rises, even when it’s not visible.”
A. ‘The sun still rises’ has definitely become a motto, but I didn’t really lean into it until 2020. I was enjoying the project and said let’s keep going into 2020 without a formal plan or objective. Then the pandemic hit and it just gave me something good to focus on. With the state of the world, having this motto of ‘the sun still rises’ is a pretty nice mindset to have. 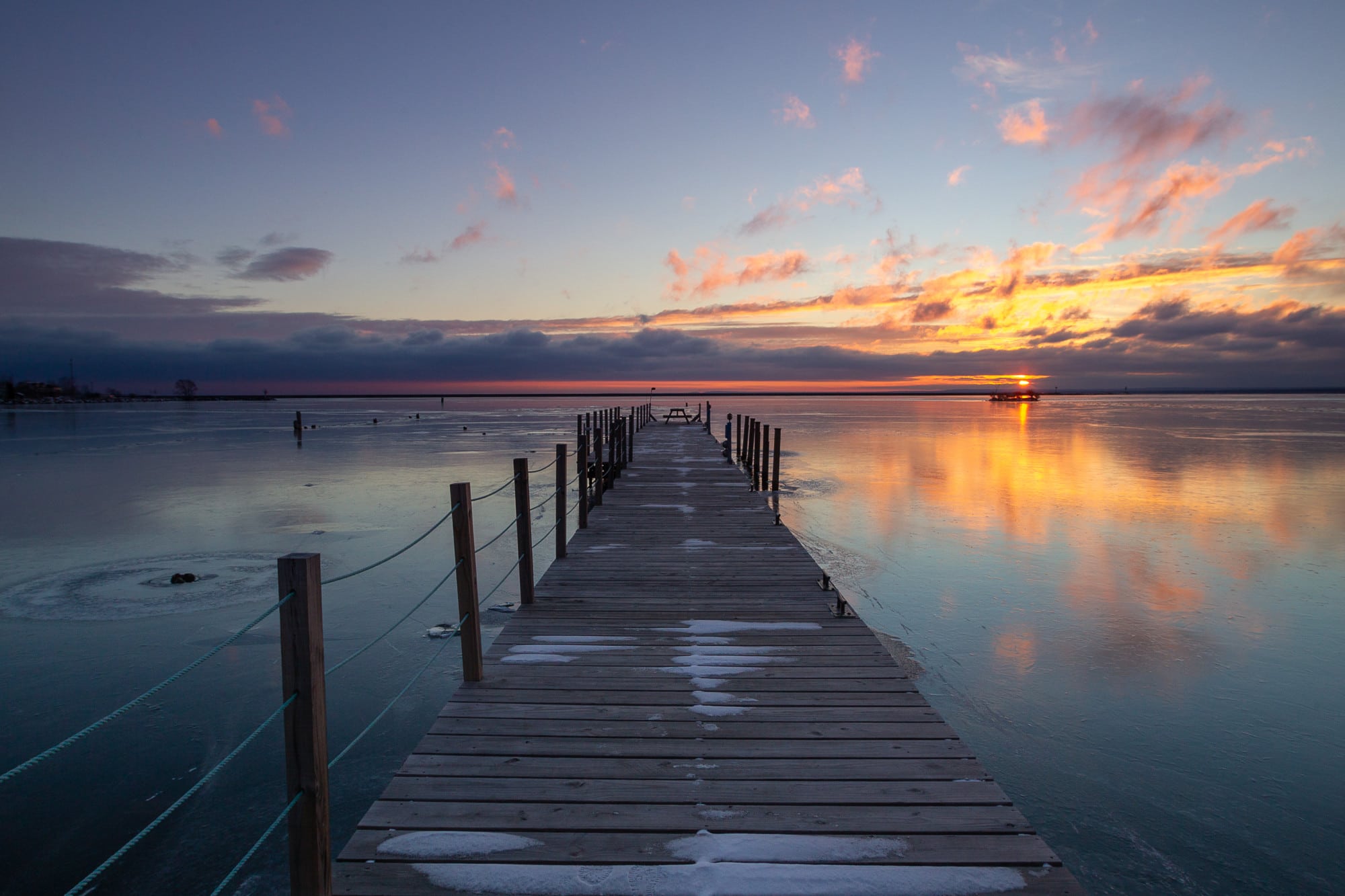 Q. What reactions do you get from people who follow the project?
A. The project’s been received very well and there are a lot of people who now look forward to the mostly daily social media posts, saying it brightens their day to see my perspective of the sunrise, and it’s nice to bring that to people. It’s definitely about trying to bring a little bit of beauty into the world.

Q. Some sunrises are just epic. Others kick your butt. Which one was coldest?
A. The coldest one I think I’ve had was close to -35 wind chill. I’ve done that on top of Sugarloaf in those conditions, and that wind is like a slap across the face. It stings. But I always say it wakes up the soul and lives in you for the day. Some of the soft sunrises of July when the lake is calm and the skies are clear—it’s very beautiful, but a big part of this project is the resilience of doing it every day, and there is more reward in the ones that are the hardest to do.

Inspired to watch more sunrises? Take the pledge at watchmoresunrises.com. 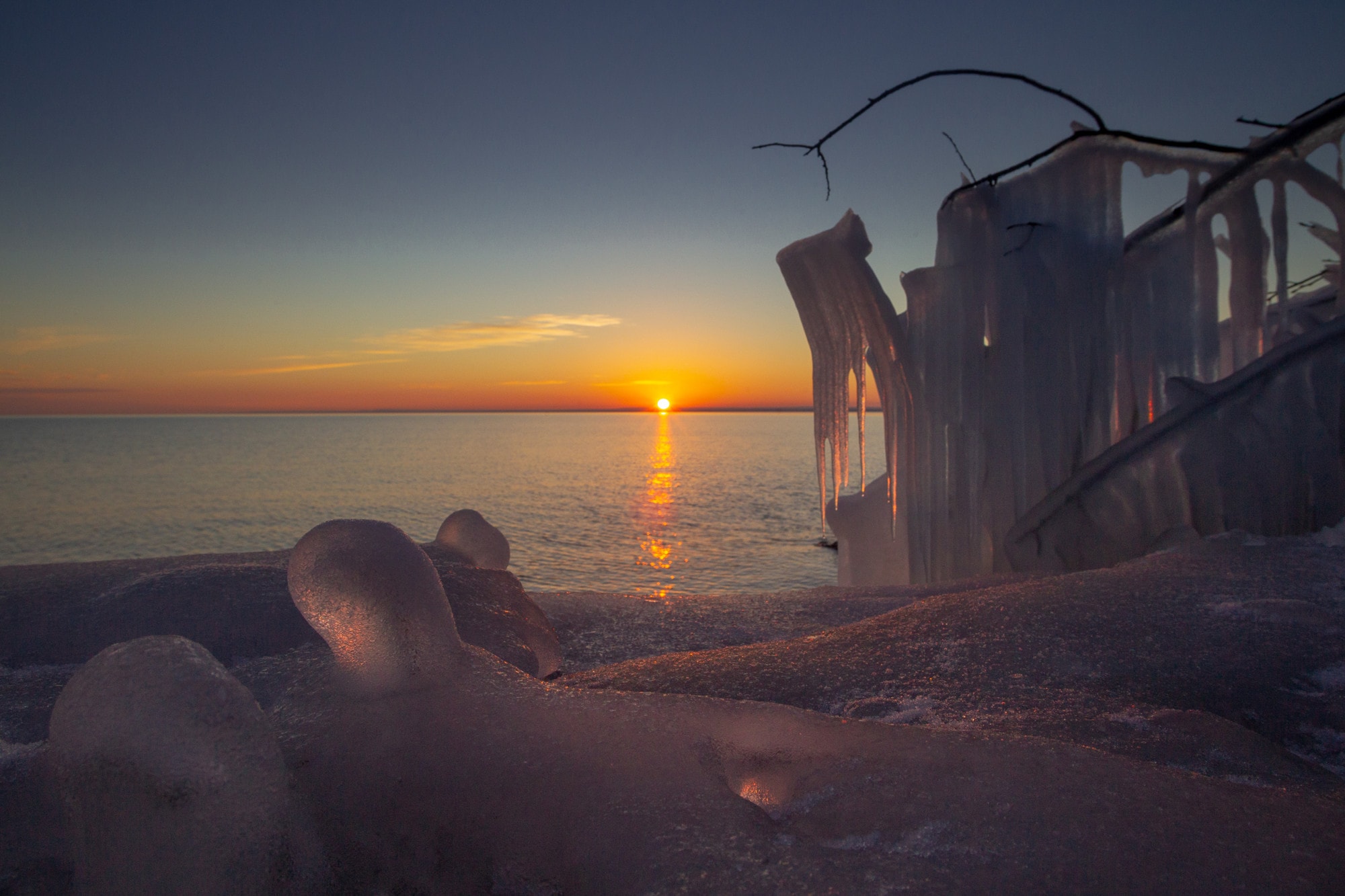