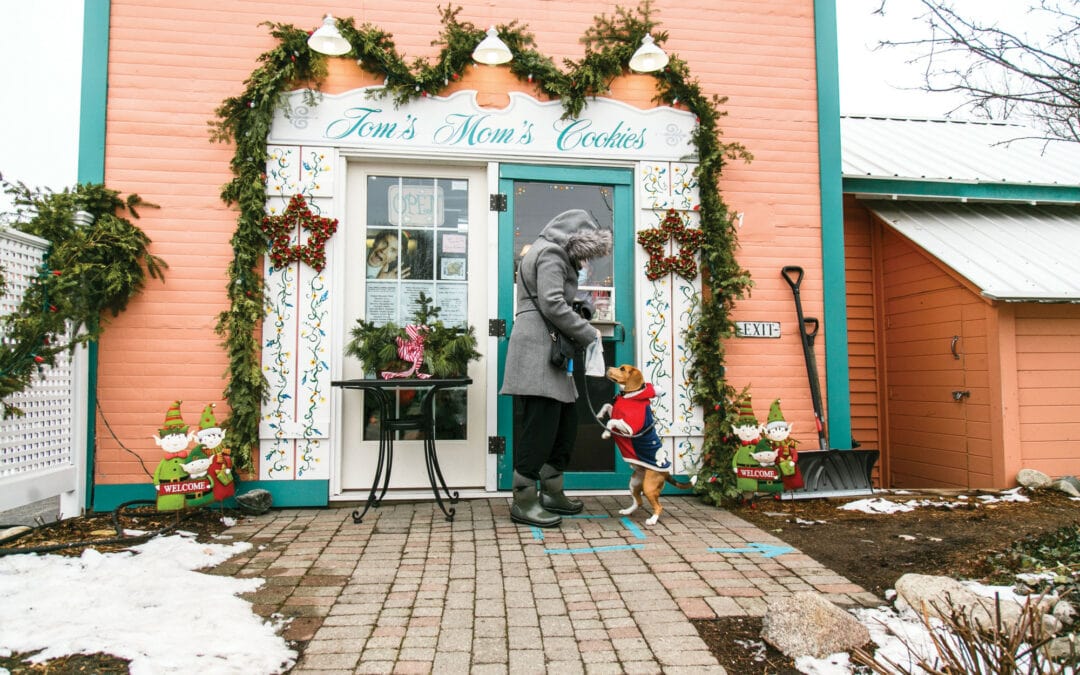 With delicious homemade cookies and tasty traditions, Tom’s Mom’s Cookies keeps the magic of the holiday season alive in Harbor Springs, Northern Michigan and beyond.

The sky is a cloudless robin’s egg blue and the weather unseasonably warm, as a woman in a white polar bear sweater strolls the path to a pastel-painted brick building with gingerbread trim.

There’s a garland-draped picket fence around the courtyard, snowmen made of wire dressed in tiny hand-knitted hats and scarves and cardboard candy canes dangling from a tree. As church bells clang in the distance, someone hands the woman a bag of chocolate chunk cookies, hot from the oven, through the shop’s walk-up window.

And if you think this is as Hallmark-perfect a holiday scene as you might get, you haven’t yet stepped inside Tom’s Mom’s Cookies on one of the year’s last mailing days before Christmas. 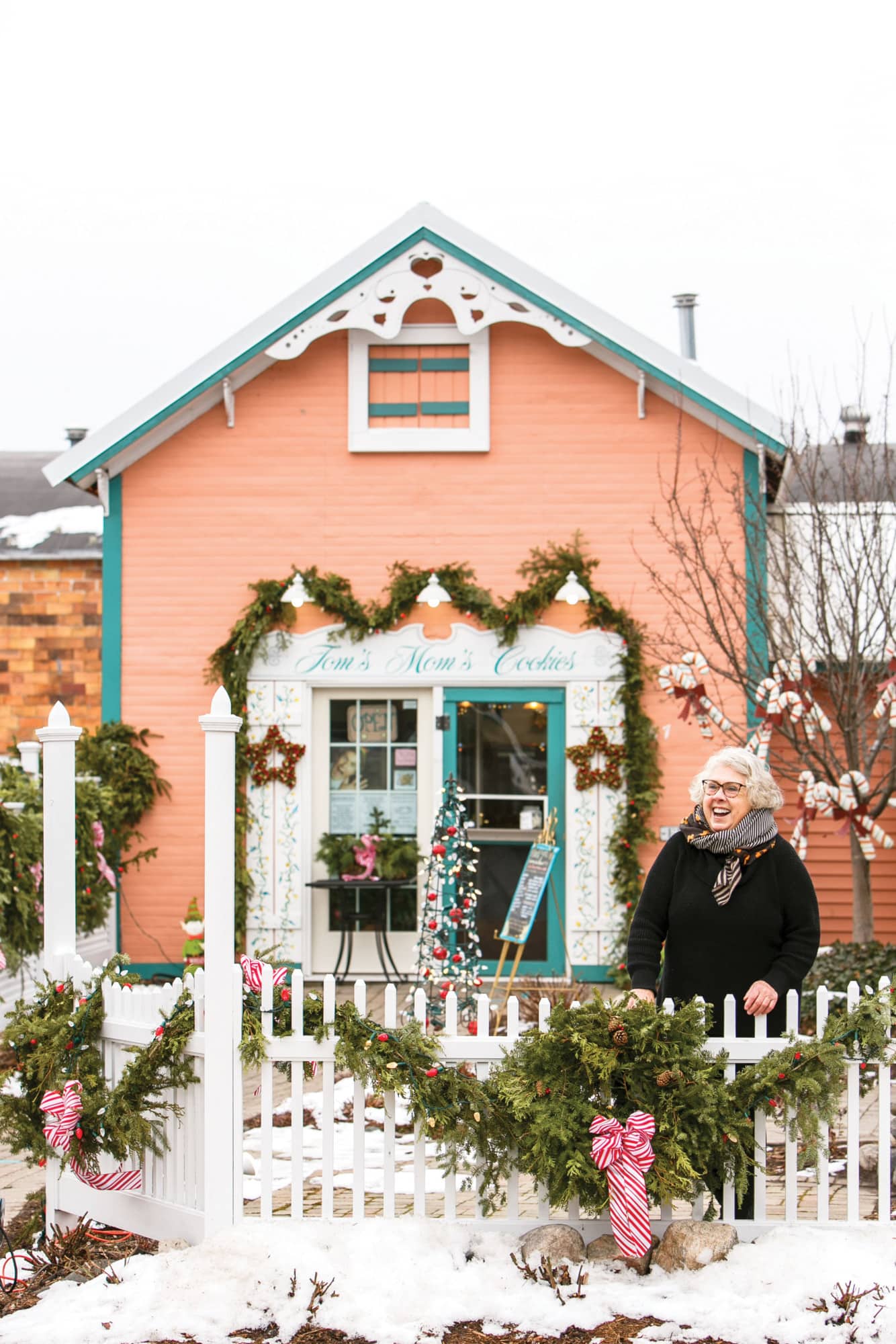 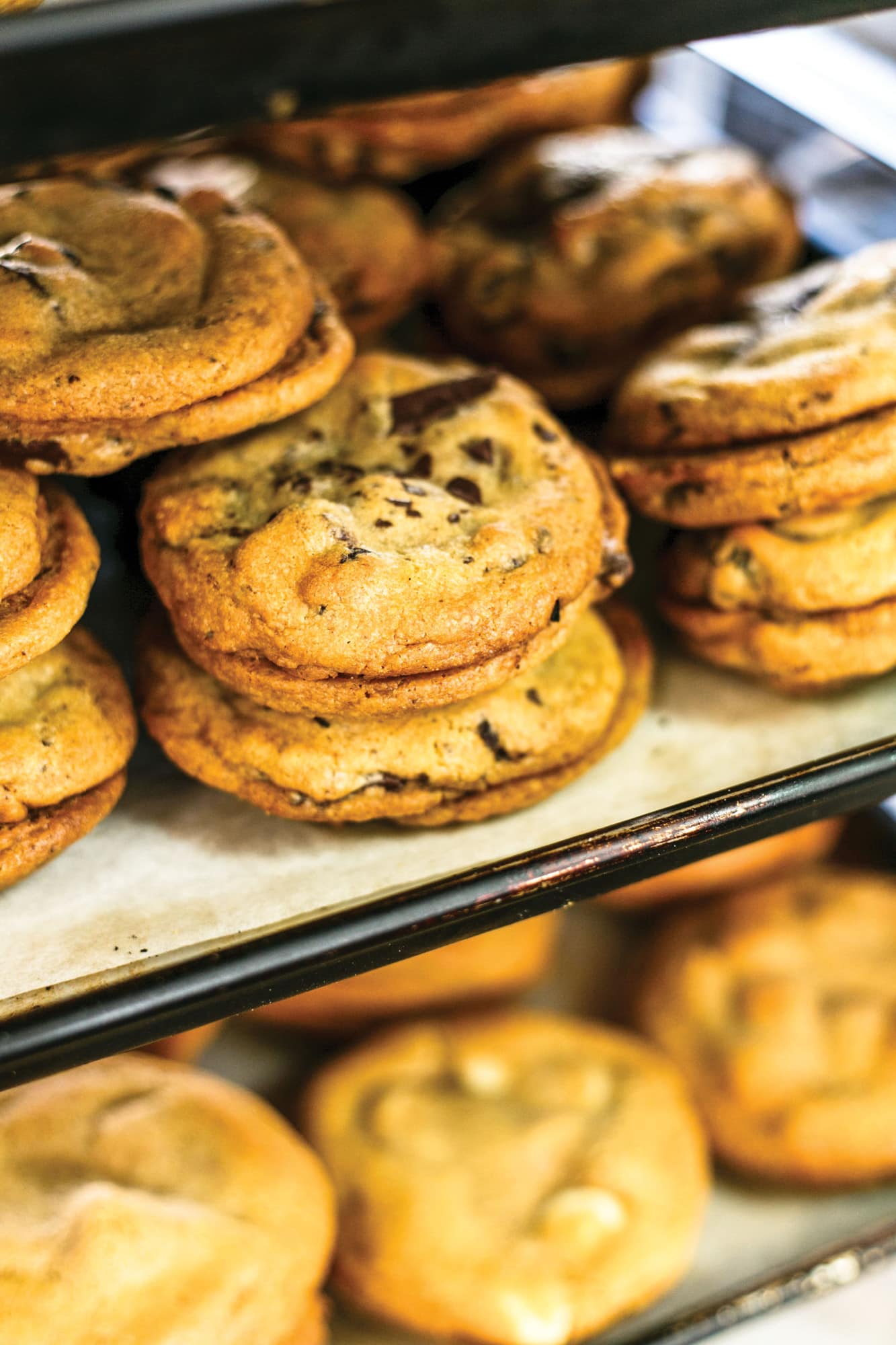 Tom’s Mom’s has been a Harbor Springs institution for more than 35 years and counting. It’s been open year-round for 25 of those years under the ownership of Sheryl McCleery, who now hands over much of the day-to-day operations to her baking, mailing and serving crew of five. Her team is supported by the assorted high schoolers who come in after school for the enviable job of “chunking the chocolate” the same way it’s been done at Tom’s Mom’s for decades.

One advantage of visiting the store in late fall and winter, rather than the summer, is that lines are far shorter for picking up a classic chocolate chunk cookie, a chocolate caramel pecan, an old-fashioned molasses or maybe a white chocolate macadamia nut. But that doesn’t mean the intensity level has slowed. The cookies are just going out the door by a different means— getting sent out the back by way of boxes and colorful cookie tins, heading into delivery trucks and filling holiday gift orders.

For three-plus weeks, the baking team comes in when it’s dark and leaves when it’s dark. That is the commitment needed to bake just one holiday season’s some 3,500 dozen cookies—or 42,000 individual beauties. In those 270 batches are 5,400 eggs, more than 1,100 pounds of chocolate (Belgian, Denver dark), 270 pounds of butter and 1,000- plus pounds of flour.

What’s the secret to the continual demand for the same basic cookie base, changed up with the addition of different nuts and chocolate varieties?

“I have to hand it to Tom and those who first developed the recipe,” says McCleery. “The cookies stay soft and don’t get hard. We started with three varieties, and now we have 23. I can take the same method and make whatever I want out of it. It ends up being the same soft, chewy cookie.”

Visit the kitchen as the sun streams through the windows into what resembles a cozy farmhouse, and you may suspect the secret might be about more than proportions. Maybe, you think, it has a lot to do with the precision and passion that goes into the baking of these cookies. 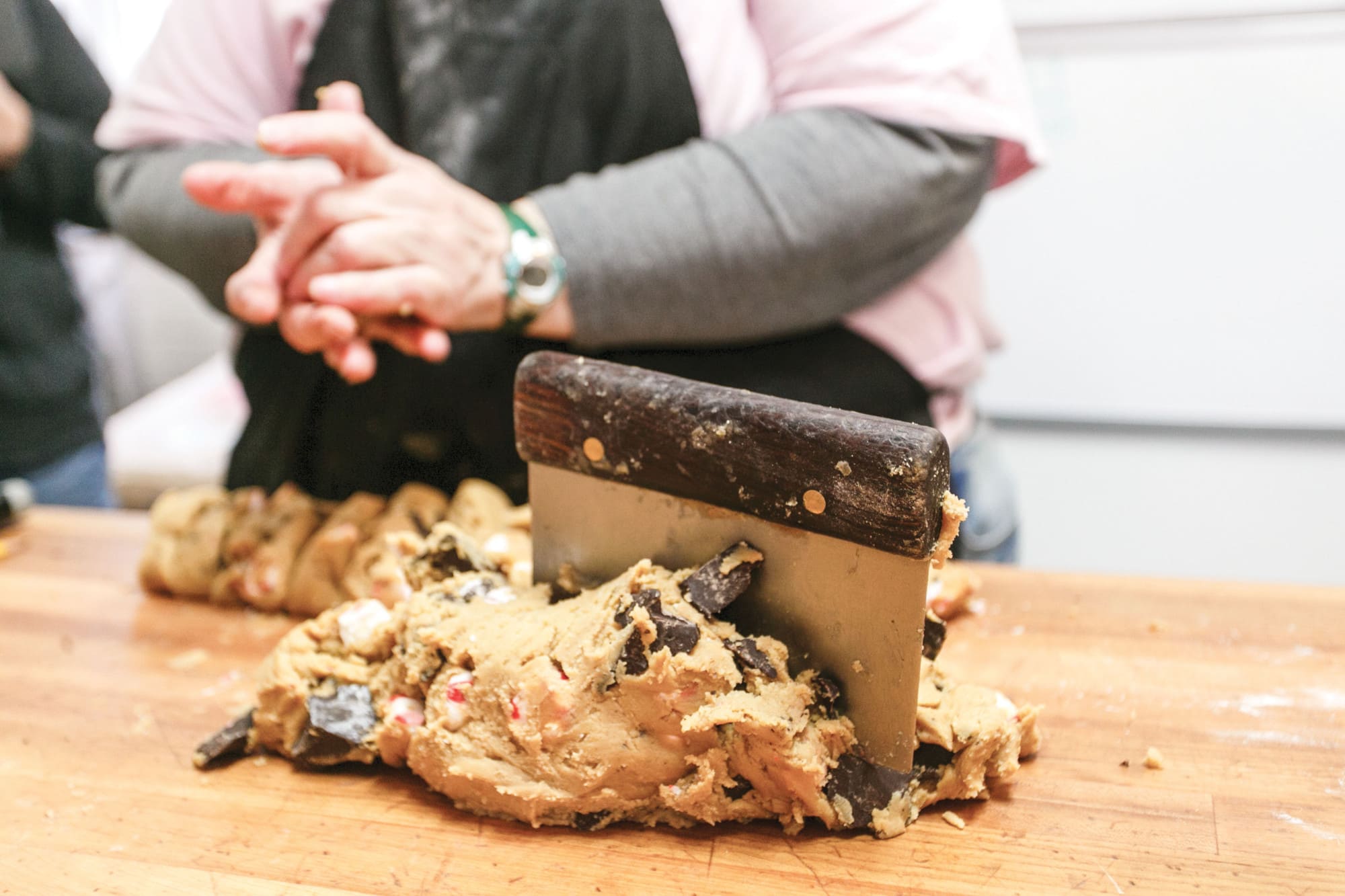 Related Read: Make it a White Christmas with this Holiday Hummer Recipe.

Behind a floor-to-ceiling stack of mailing boxes, seasonal employee Sue Standish is rolling out a batch of dough, dividing it roughly into cookie-sized bits then placing a single ball on a kitchen scale. “So close!” she says as she takes away a centimeter or so of dough, weighs it again, finds she’s short and adds a touch more. “I’m trying to get exactly 3 ounces on that scale. I gave that a little roll because I had to add to it.”

Only when at optimal weight does the cookie dough go onto the tray for baking. Directly across the wood-topped island prep space, colleague Robin Baldwin is following the same process with a peanut butter base. She’s apparently put too much effort into her mixing, at least according to Manager Jill Vansloten, who is mixing huge batches of dough while also working the ovens and carefully watching the old-fashioned timer attached to the wall. She is always vigilant when it comes to achieving perfection. A few of the peanut butter cookies flattened out a bit like a pancake when baked, so Vansloten instructs Baldwin not to work the dough quite so much.

Perfection is key, and not just because the cookies have to be the perfect circumference to fit into the packaging tin. The team knows that customers come seeking more than a cookie; they’re buying a memory in a bite. Some customers have been coming for years (just like Vansloten did as a child), sometimes for generations now, returning for a vacation cookie then ordering or sending some to family and friends at Christmas as a reminder of a Harbor Springs visit or cottage-time magic.

“We have a commitment to make the best cookie we can every single day,” McCleery says. “We’re really fussy about it. You know how it is. You go into a restaurant where you had a great meal one time, and the next time it’s not so good. You may give it one more try, but you don’t go back. Worse than that, you tell other people. If you make it good every time, that’s how your business grows.”

The whole team knows there is no room for mistakes. It is a tricky dance to work together, making so many cookies in the small space, but it is an especially sweet one, says Standish, who admits to taste testing at least one cookie a day.“ I like to think of all the people getting cookies for Christmas,” she says, “like we’re the little elves.” 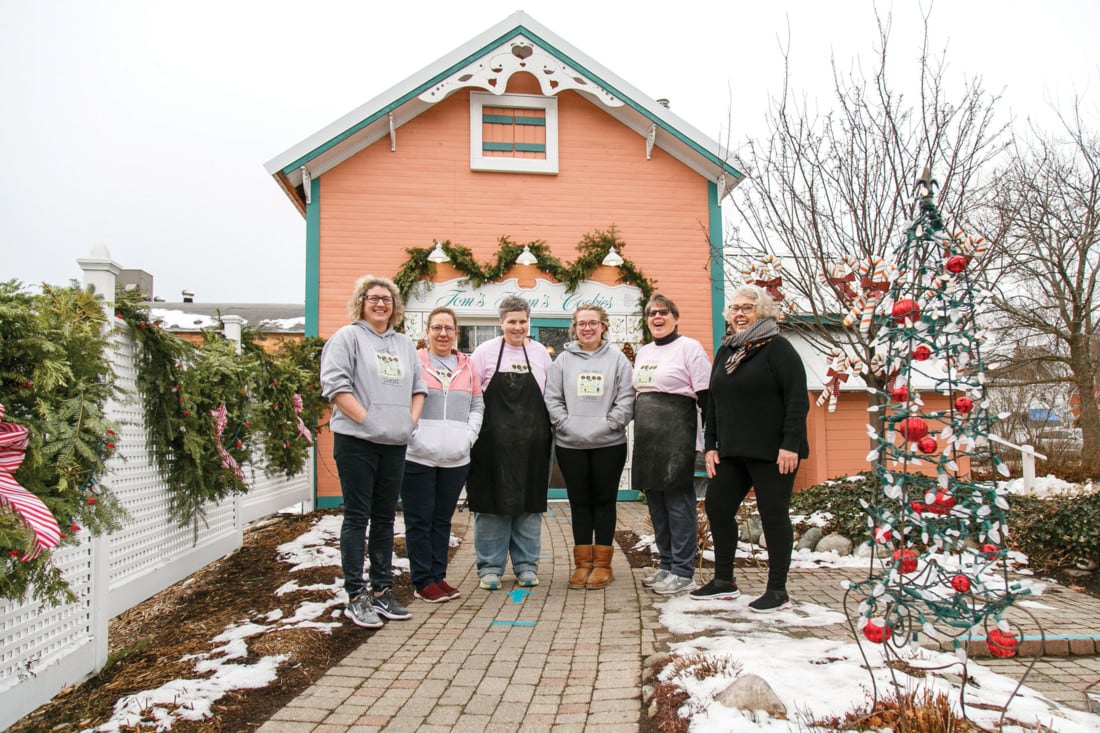 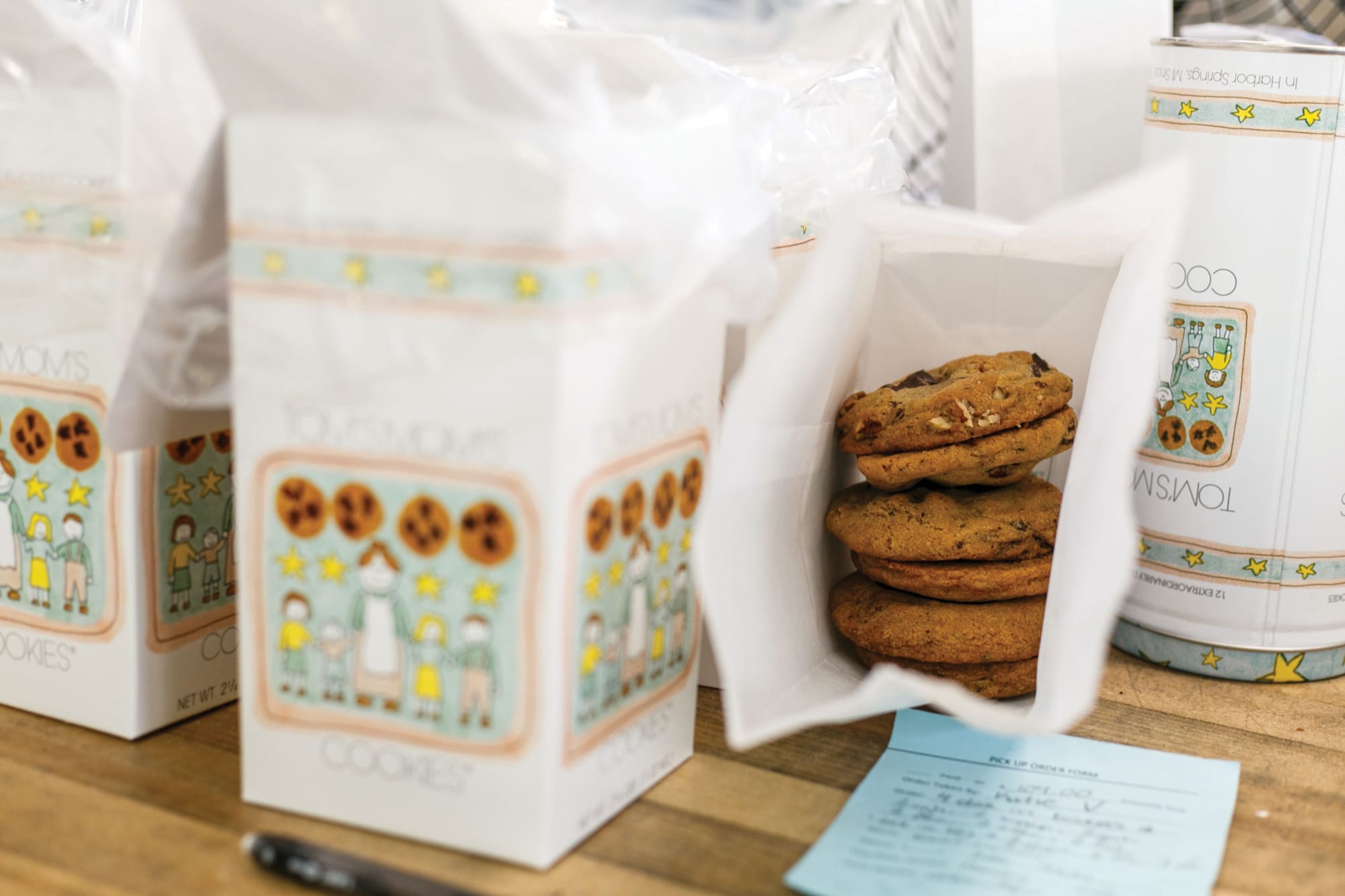 Related Read: December’s On The Table: Black Walnut Biscotti for the Holidays.

The original elf was, not surprisingly, named Tom. Tom Kneeland opened his store in Charlevoix with the nearly identical recipe of today, but he made a just slightly smaller cookie. As the story goes, the recipe came not from his mom, but from someone like a mom—the mother of a close friend. He later offered franchises. A friend of McCleery’s started one in Harbor Springs in 1985 and hired McCleery to work for her in the summer. Ten years later, McCleery bought out her friend and left her career as a social services supervisor, turning a career dealing with crises into one with the continual aroma of baking chocolate.

“What a difference,” she says. “Everybody’s happy all the time. And cookies are such a part of Christmas. Think about it. You put them out for Santa with a glass of milk.”

While the cookies have found success since Tom’s early days, the store’s fortunes took an even better turn for McCleery when she moved to the Spring Street location in 2000, where it still sits. That year, a producer with the “Food Network” passed by this more visible location on the way to interview an area chef and was intrigued by the cookie shop with the storybook vibe.

“After that, I would get these intermittent phone calls saying, ‘I want to do a spot on you guys,’” McCleery recalls. “They finally came in 2001, and it took them another year to put it on the air.”

The impact of that exposure was huge. “That was life-changing, literally life-changing,” McCleery says. “I had called people who’d gotten exposure on the network who said, ‘You need to in- stall an 800 line. You’re going to get nothing but phone calls.’ And I did. The phone would ring, I’d pick it up, put the receiver down and get another. It was like that all day for weeks. I finally had to say, ‘We can’t even process your order for a month, we’re that far behind.’”

And it didn’t end there. The store would get a new boost whenever the network would replay the episode. Rachel Ray went on to feature the cookies as ‘snack of the day,’ and there’s a photo of McCleery alongside the “Today” show’s Matt Lauer on yet another national appearance.

The store also grew organically, through word of mouth in the region, McCleery says, and she keeps evidence of that on the same publicity wall. Next to the “Today” show shot is a photo of a customer sitting cross-legged outside the store as if levitating. “My first cookie left me hallucinating about the second one, which I would buy the next day,” the accompanying letter says.

“You get a tradition. That’s what it is,” McCleery says. “That’s a beautiful thing for everybody—customers, me, the bank account. Now, after all these years, people are saying, ‘We come to Harbor just to eat cookies,’ or ‘It’s the first place we stop when we come to town.’ We hear stories of people driving from all over to get them. It warms my heart to know we’re still doing such a good job 35 years down the road. It really does.” 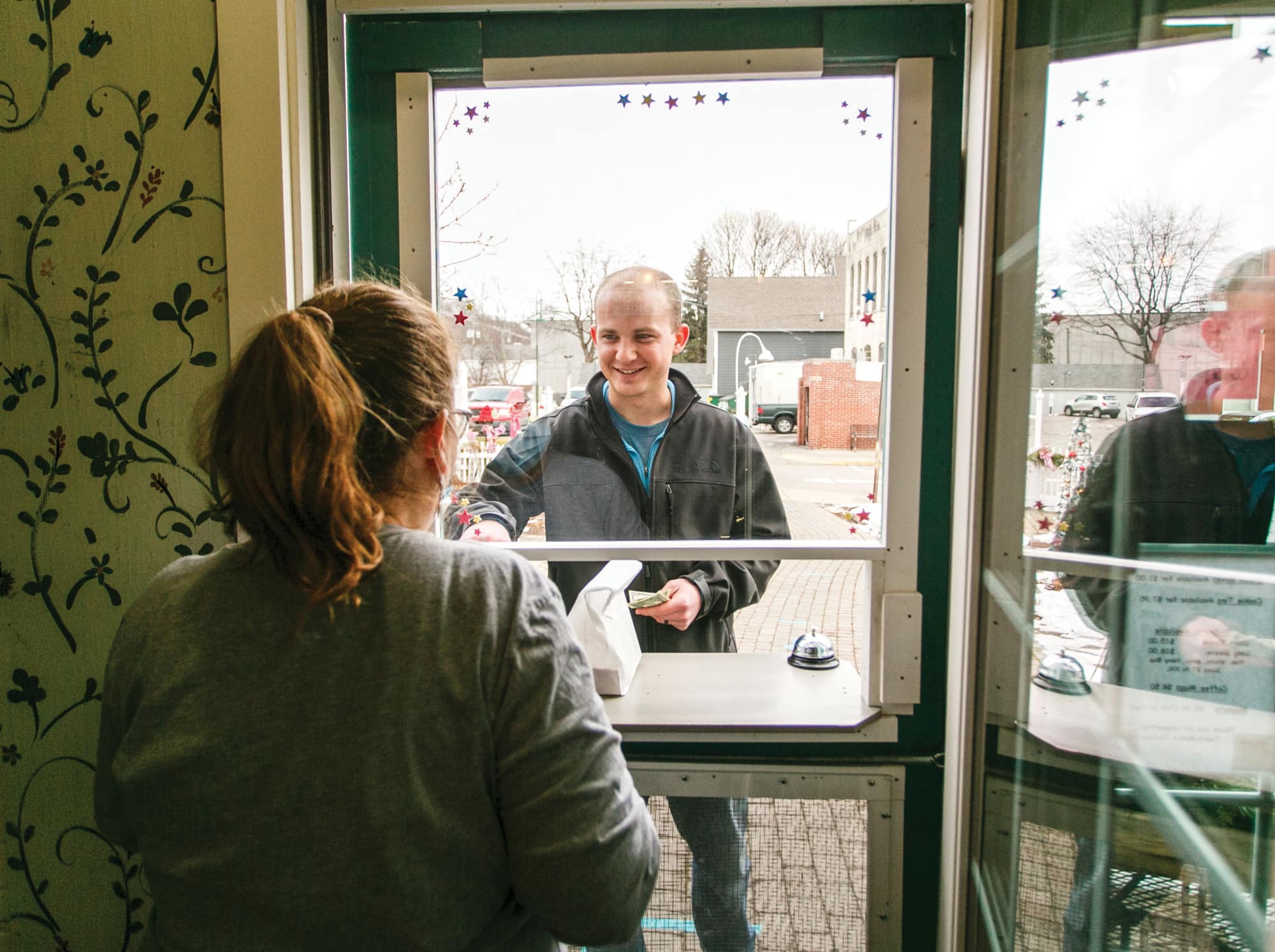 Kim Schneider is a travel writer specializing in Michigan adventures, food and wine. The Midwest Travel Journalist Association has named her Mark Twain Travel Writer of the Year, and she’s the author of “100 Things to Do in Traverse City Before You Die.”

Melisa McKolay is an award-winning photographer based in Traverse City, specializing in lifestyle portraiture and documentary photojournalism. mckolayphoto.com