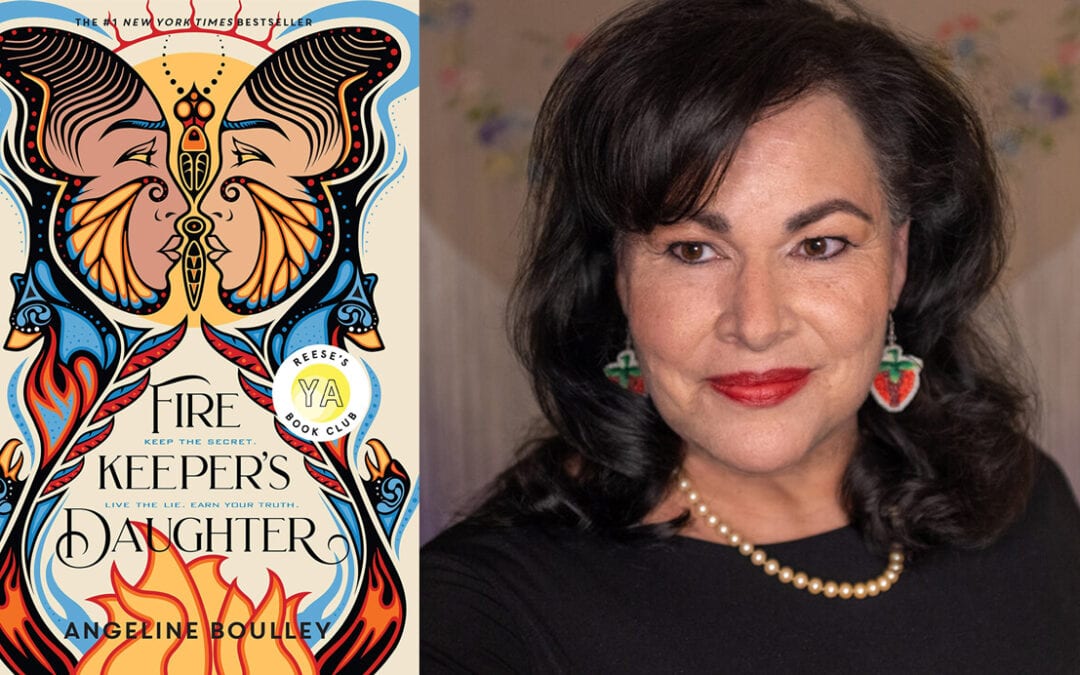 The #1 bestselling author of “Firekeeper’s Daughter,” Angeline Boulley, joins the National Writers Series for a Traverse City event at the City Opera House on Thursday, December 9. Tickets are available via the NWS website, and in-person attendees will be required to provide proof of vaccination upon arrival.

It’s hard to imagine a more exciting year for a Michigan writer than the 2021 that Angeline Boulley has had. The story of her debut novel, “Firekeeper’s Daughter,” first came to her at the age of 18. she started writing the book which took a decade to complete. Finally, in March of this year, the book was published and a flood of accolades (not to mention book sales) immediately started coming in.

The book became an instant New York Times bestseller and was named one of the Best YA Books of All Time by Time Magazine. The story was also picked up for a Netflix adaptation by Higher Ground Productions (run by Barack and Michelle Obama) and received glowing reviews from publications like Cosmopolitan, NPR, Publisher’s Weekly and Kirkus Reviews.

It’s been a wild ride over the past nine months, and the National Writers Series gets to close out the year talking about all of it with Angeline at the City Opera House. Before we gather for the Traverse City event, we sat down to chat with her about her journey, plans for future books, and how a younger Angeline might have changed “Firekeeper’s Daughter.”

NWS: Before the release of “Firekeeper’s Daughter” earlier this year, the manuscript was auctioned among a dozen publishers, so industry people definitely saw the potential in the story—but when it finally hit shelves, what were your expectations or hopes for the book?

Angeline Boulley: Of course I wanted the book to do well. Because I’m an unknown Native author, I wanted to show that stories about and by Native people could be commercially successful. Because publishing is, after all, it is a business, right? I wanted my book to do well so that other publishers might take more chances on unknown native authors with great stories to tell.

NWS: Was there a moment, a tipping point when you knew this was going to be something perhaps a little bigger than you expected?

AB: I think when it stayed on the New York Times bestseller list for so many consecutive weeks. That to me just was like, “Okay, there’s something here. Something’s building and growing.” And then Barnes and Noble picked it as their young adult book of the year, and that too was monumental for me. The reception that it was getting was just growing stronger. It wasn’t fading out.

NWS: The book famously took a long time to write … how different would this book have been if you started writing it at 18, or tried to create it in your 20s or 30s?

NWS: Was any of that informed by any other writing efforts? Do you have any other novels in the proverbial trunk that’ll never see the light of day, but helped you get to the point of trusting yourself as you mentioned?

AB: Nope. [laughs] It’s always been this one story.

NWS: I’ve seen a lot of people ask about what it’s like being an author with Native American heritage, but I wonder if you have any thoughts about your geography, about what it means to be a Michigan author?

AB: I think that the reception in Michigan has just been so great. I think when the location becomes another character in the book—I love stories where that location is more than just, you know, geography. Where the cultural influences and history tie into the book, to the themes of the book, I like that. So I loved tapping into that.

NWS: Maybe it’s because Native American populations are more present in Northern Michigan, but it seems to me like the larger culture is finally ready to embrace stories from indigenous populations. Or, at least, partially indigenous like your protagonist in “Firekeeper’s,” Daunis. Do you think there’s anything to that?

AB: I think you’re spot on about it. People seem to be more receptive to stories, particularly from people writing their own lived experience or what we call Own Voices. I think people have always been interested in learning about Native Americans. It’s just the quality of information that’s been out there—particularly what’s taught in schools—is just so misguided.

NWS: You’ve described “Firekeeper’s Daughter” as “the indigenous Nancy Drew you always wanted to read.” Does that imply that there’s going to be a larger series of books in the “Firekeeper’s” universe?

AB: Yes. I have envisioned a four-book series, but each book will have a different main character but it’s still set in my tribal community, and I have a theme or a thread that’s going to tie all of the stories together. That’s what I’ve been toying with ever since I was getting near the end of writing that final draft of “Firekeeper’s Daughter.” The idea for the next book came in, and then as that came in, the idea of, “Wait, there are more questions that can be answered in future stories.”

The Netflix series, I believe what they plan is that they will continue with Daunis as the main character. And so it’s neat to see those roads diverge and have Daunis have these exciting adventures. I’m really excited about that. But as a writer, I wanted to challenge myself.

NWS: Finally, what’s been the most unexpected part of the past year following the success of your book?

AB: I think that … I’m more busy. I have more speaking engagements [so] I am spending a lot more time not writing right now. I kind of envisioned that I would be doing things to promote the book and then I would settle back into a writing routine and be working on book two. And I’m loving the speaking engagements. And I probably say yes to too many things, too many invitations. But I just love engaging with the readers.

I feel like the readers have shelled out the money to buy the book and read it or request it from their library, and I’m excited to hear from them and answer questions. To me, I am just so loving that side of being an author and I hadn’t given that part much thought the whole way through the process. I didn’t envision it growing instead of fading out.

Karl Klockars is the Communications Manager for the National Writers Series. This interview has been edited and condensed.