A Love Affair with an Updated Log Cabin on Elk Lake 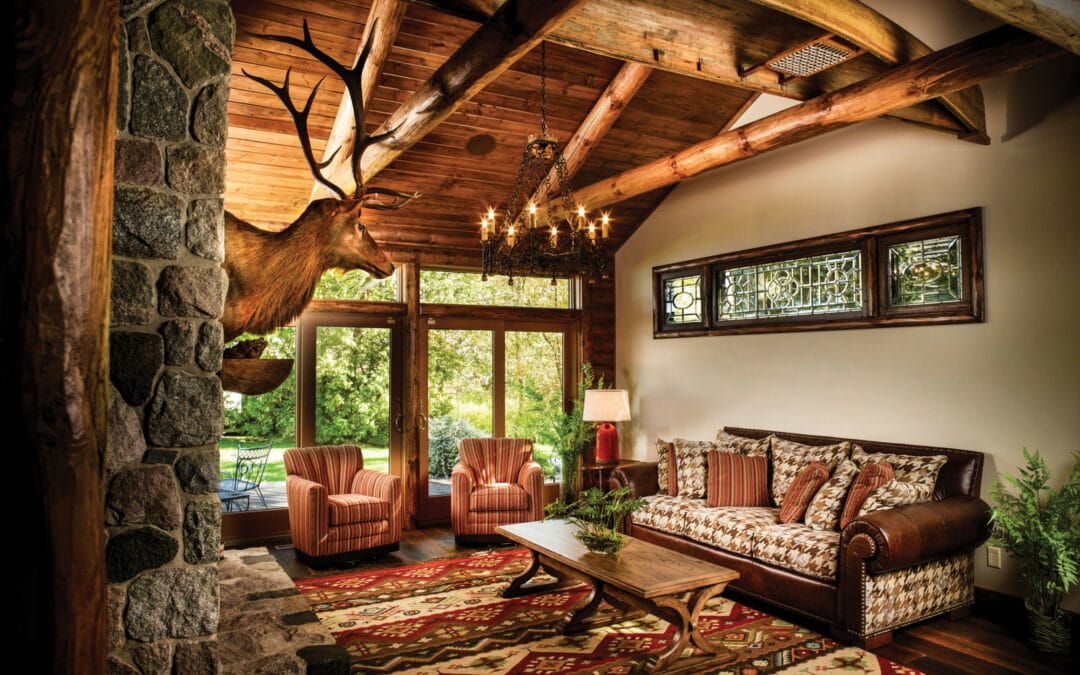 This Elk Lake cabin had an exquisite setting, boatloads of character—and outdated style. With a talented designer, the devoted owners transformed this Northern Michigan home and made it their own.

Busy chicagoans Tim and Liz had their hearts set on finding a vintage log cabin in Northern Michigan, one that, as Tim says, “felt like a summer camp.” Having vacationed at The Homestead in Glen Arbor, they began their search on nearby Glen Lake and Lake Leelanau, but didn’t find exactly what they wanted. A property for sale on Torch Lake got them interested in the east side of Traverse City and, while they didn’t purchase that property, it did make them realize that the lakes on the east side of town are just as blue and beautiful as the westside lakes.

So, when a circa 1930s-40s log cabin on Elk Lake came up for sale, they had a look. If the quaint cabin with its log siding and even more quaint wavy Bavarian trim weren’t enough, the 200 feet of stunning frontage where two streams join to gurgle as one into Elk Lake, was. Sold! The cabin’s bones were good, but the couple knew they’d need to update the kitchen and redo the hodgepodge of additions to create a consistent rustic theme. But the bearskin rug that had stretched across the ceiling of the original section of the cabin for who knows how long? As far as Tim and Liz were concerned, that wasn’t going anywhere. 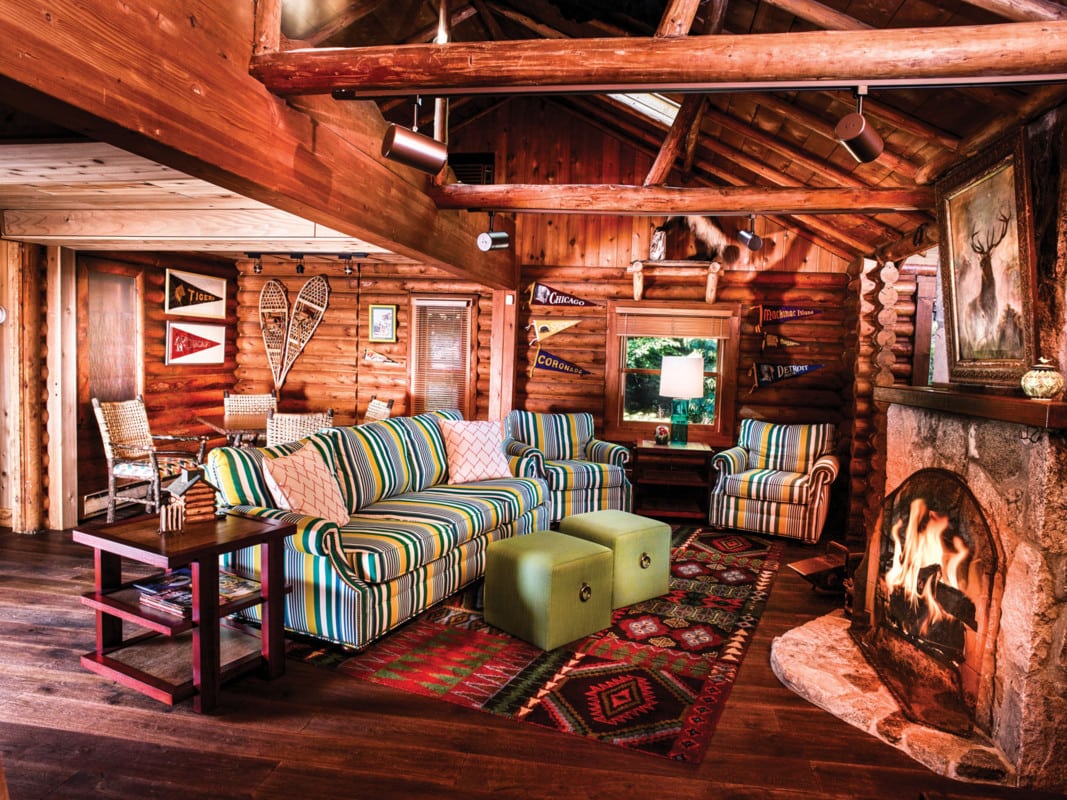 In Traverse City for the closing on the cabin in the fall of 2014, the couple dropped into the furniture/design store Urban Diversions, owned by Dale and Teresa Campbell, then located on Union Street, but now relocated to the corner of US-31 and Bunker Hill Road in Williamsburg. Dale is an award-winning designer of furniture and interiors, including kitchens and bathrooms. Tim and Liz walked into Urban Diversions to look at furniture. They came out having hired the Campbells to manage the entire renovation project. “We’d had some bad experiences with contractors in Chicago,” Tim says. “Knowing that someone we could trust was going to be all over this project from ideas to managing the contracting was a really good feeling.”

At Dale’s recommendation, Tim and Liz hired contractor Brad Smith of All-Ways Construction. Later in the project, after completing the interior, Smith retired, and Dale recommended that Kris Arnold of KA Construction finish exterior renovations. Dale’s first major suggestion was to open up the beautiful view of Elk Lake from the foyer, which was blocked by a staircase. By moving a few walls around, Dale found a spot for the staircase that didn’t block the view, and the All-Ways team built a new one with half-log steps, peeled-log supports and handsome wrought-iron railing spindles. 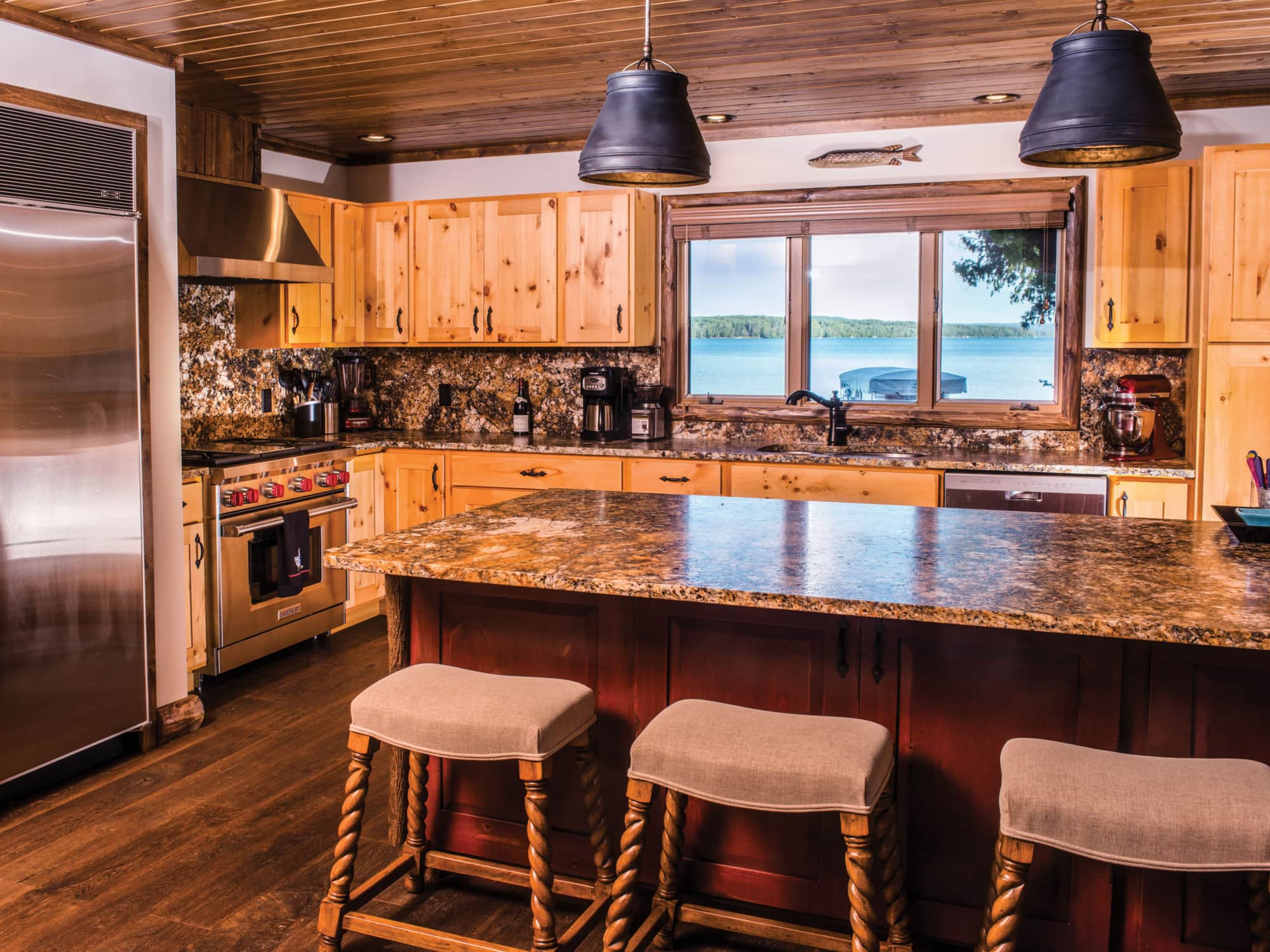 Related Read: Take a Look Inside This Three Barn Farm on Leelanau Peninsula.

Mission #2 was giving the later additions to the main cabin—rooms that included the living and dining room and that were hung with drywall instead of log—a more rustic cabin-like feel. To that end, Smith and his team jacked the walls up, took out all their supports and replaced them with pine beams—placed so that an antique canoe, found by Dale, could hang from the ceiling between them, and so that the huge antlers of a trophy elk mounted over the fireplace wouldn’t scrape them. A pine-clad ceiling, a wall covered in half-logs and a hand-scraped oak floor round out the rustic theme. The remaining drywall is painted a vintage shade known as “haint blue,” that long ago was thought to ward off evil spirits.

The kitchen got a makeover with knotty pine cabinets trimmed in hickory (to match a hickory table and chairs in the breakfast nook), designed by Dale. A generous new 4-by-10-foot island is topped in a leathered quartzite called Golden Galaxis, as are the perimeter counters and the counter-to-ceiling backsplash. Some rearranging of walls in the master bedroom made room for a walk-in closet and bathroom large enough for a soaking tub (as well as a new powder room off the foyer). Additionally, three bedrooms and a bath upstairs were redone to accommodate guests and the couple’s two sons. 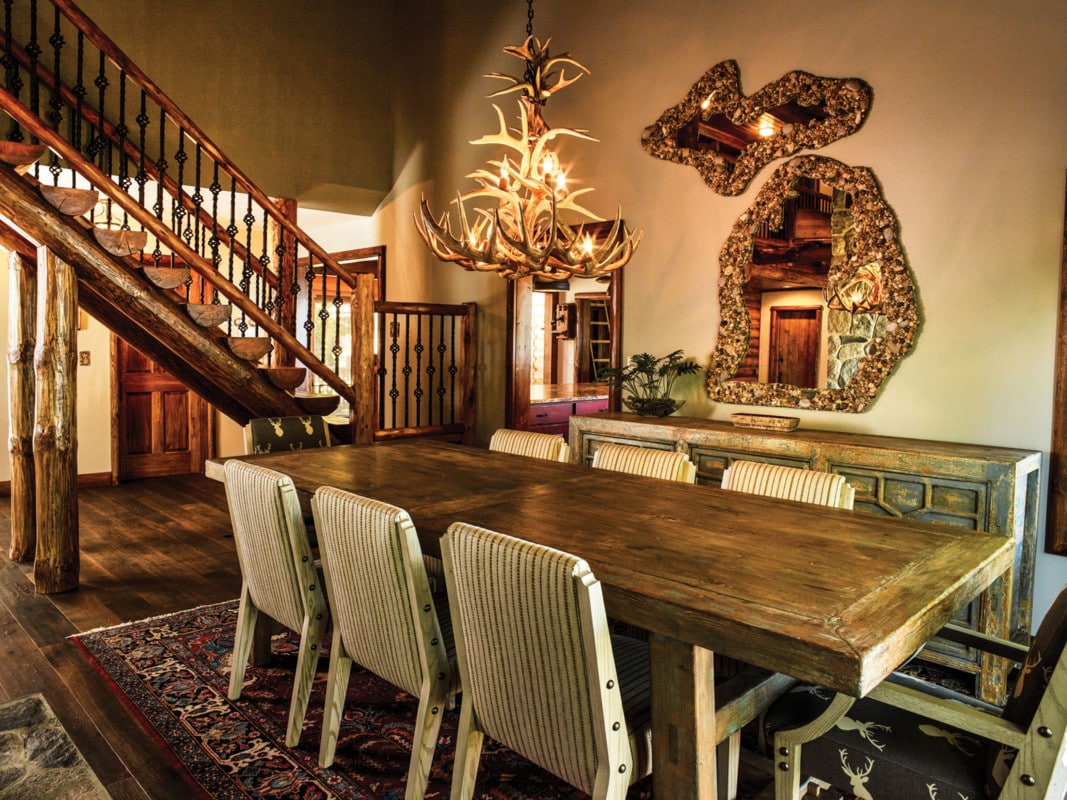 The cabin is furnished largely with furniture sourced from Urban Diversions. Among the pieces are a pair of mahogany chairs designed with a vintage nautical feel, as well as two chairs with magnificent scrolled arms that is a part of Dale’s own Waterfront Lounge collection. And much of what didn’t come from Urban Diversions was either collected by Dale (a stuffed Wolverine in honor of Tim, a University of Michigan alum) or Dale helped commission— including the fabulous wall-sized Michigan-shaped mirror framed in Michigan stones that hangs in the dining room.

The cabin is still a work in progress. Among the most recent changes are all-new Marvin windows framed in Wineberry (a shade of red) cladding. Even so, the family is as comfortable here as if they had owned it for generations. As the years roll by, it is feeling less like a summer camp and more like the dream place for Tim and Liz to retire. 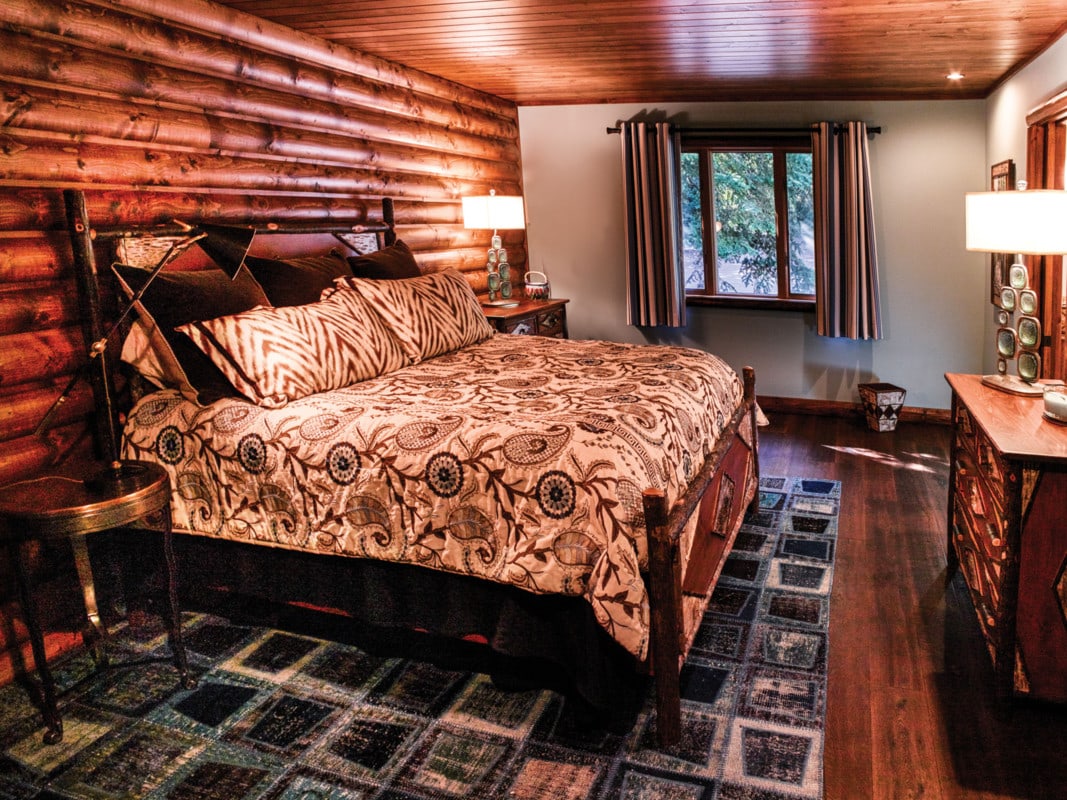 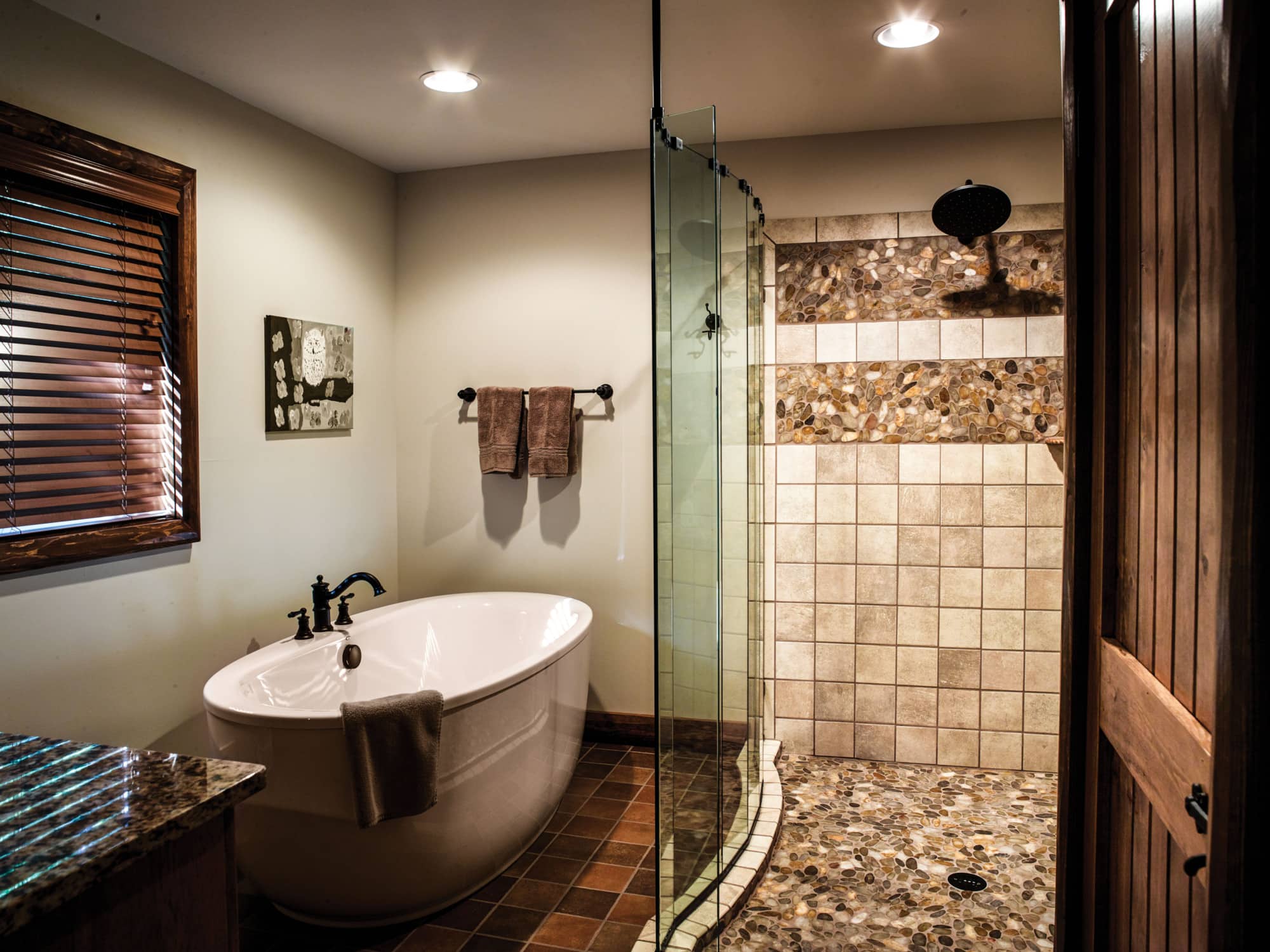 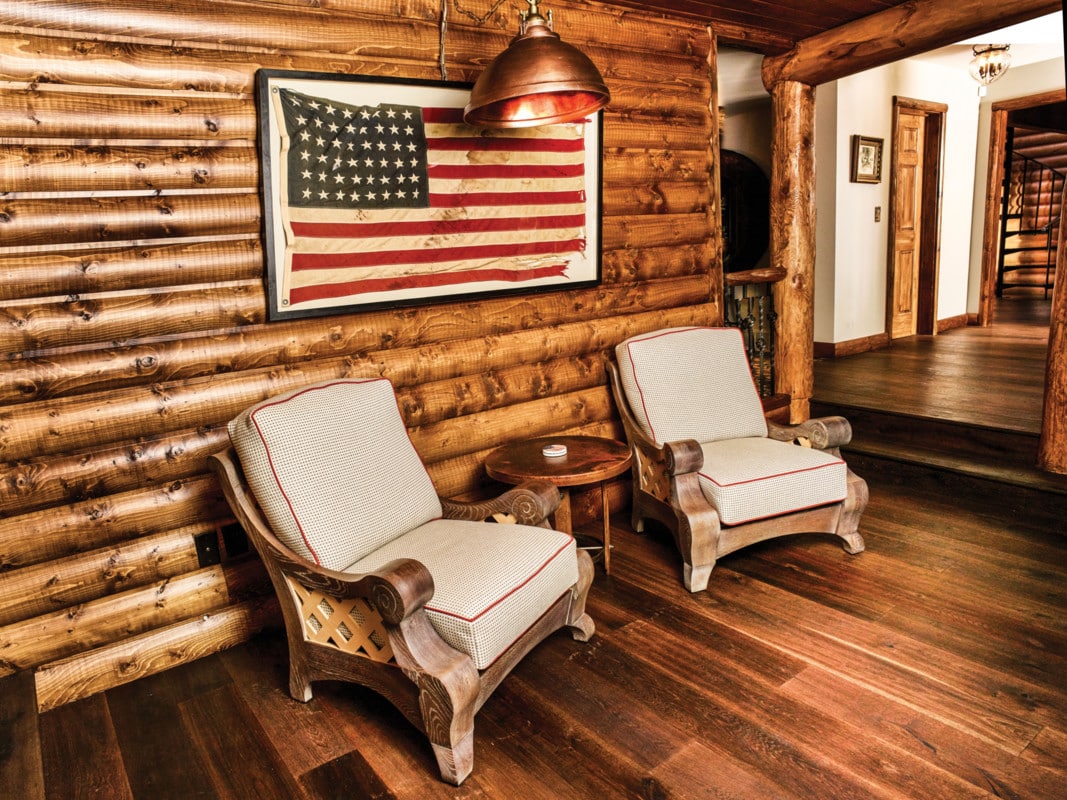