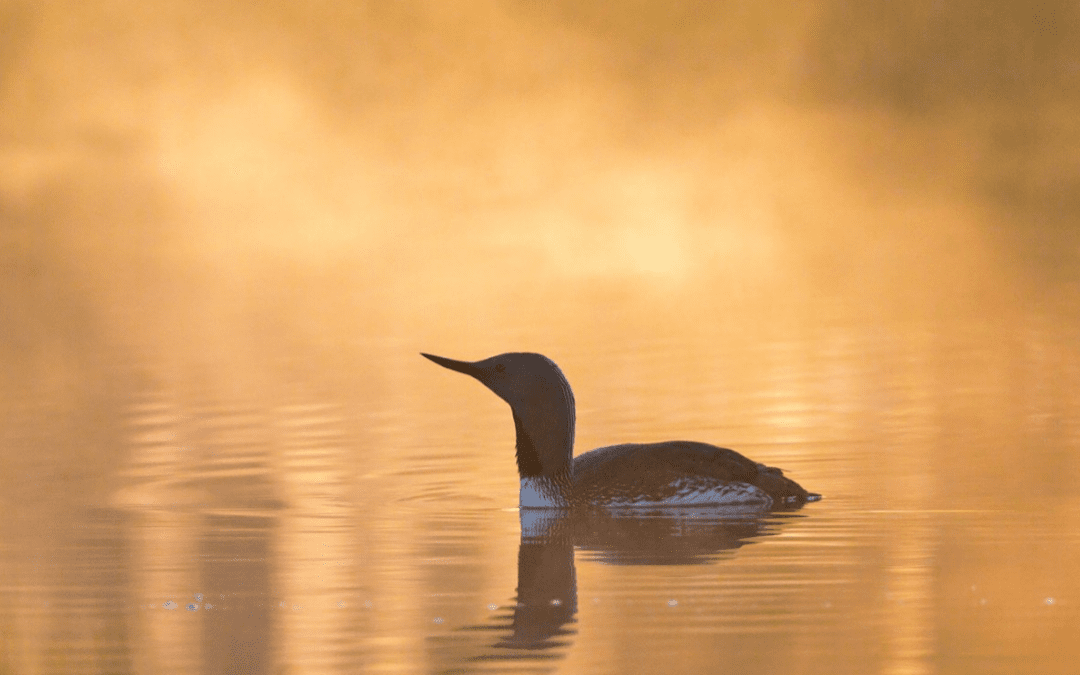 Four perfect strangers in Northern Michigan stopped everything they were doing to help a distressed loon. From no phone service to a thick fog that may have disoriented the loon, learn how this group overcame obstacles together to help protect this majestic, Northern Michigan bird.

A foggy morning. I was on Twin Lake Road in Kalkaska on my way to an appointment in Traverse City when I came upon a motionless loon sitting in the middle of the opposite lane. I didn’t want to stop to see what was wrong—to waste time when I had so much to do, and the heavy fog was finally lifting. Not a good day for changes to my schedule.

Once past him, I cursed myself and turned around as fast as I could, praying to get back to where he sat before a car came through and killed him.

The beautiful creature didn’t move when I pulled up next to where he squatted. As I got out of my car, he turned his majestic head, looked directly at me and didn’t, or couldn’t, move his body. Black and white feathers—all perfect. Long neck, long black beak.

No obvious injury. As I approached, he watched. He was hurt or stunned because he didn’t try to fly away, didn’t flap his wings, only looked directly at me. My job, obviously, was to get him out of the road. I had a comforter in the back of my car that I used to cover him completely and then lift him—the size of a big goose, strong, solid—to the side of the road. But leave him there? Unable to move?

I’ve had loon encounters before. Years ago, after my daughter called to say she was getting a divorce—three little children caught up in it—I went down to sit beside Starvation Lake and cry. A pair of loons swam up, closer than they’d ever come before and stayed with me for over an hour, by which time I’d stopped crying.

I watched them swim away until they dove under the water and were gone.

I’m old now, less likely to stop and help anyone. I have less strength, more fear in this time of COVID and the terrible, divisive political climate. But I couldn’t leave the loon. Instead, I stood there and did the weakling’s thing again: I cried.

A car stopped in the middle of the road and a woman got out to ask if she could help. I showed her the loon. He looked at her but not with fear. He didn’t move. “We could call the DNR,” she said. But I had no signal on my phone, and neither did she.

“I’ve heard of a woman who rehabilitates loons . . .” she said. But with no signal, no solid idea of what to do, we stood there looking at each other.

Related Read: A Loon, a SUP and a Northern Michigan Paddling Near Miss.

“I won’t leave you,” she promised as another car came by and stopped.

The driver got out and came over to us. She asked what was wrong, listened and was as concerned as we were. This woman offered a large plastic bin to put the bird in and take for help—dumping clothes out (obviously the bin wasn’t extra or unused, she was offering what she had).

A red pickup came by. The man looked out his window, taking in our group gathered in the road. He drove on, then turned around and was back, getting out of his truck, and was shown the loon.

“I just happened to hear on the radio how this fog is disorienting the loons,” he said. “They can’t fly in it. They can’t take off once they’re grounded, so maybe he just needs to get back to water.”

“Twin Lake,” he continued. “We can take him there and put him in.” A chance. Maybe an answer. Twin Lake was close by.

The four of us got in our cars—the loon now in the second woman’s plastic bin, in the back of the first woman’s car—and, all falling in line, we drove to the lake where the gentleman took the patient loon from the container, hold- ing on tight, and got the bird to the edge of the lake where he set him free.

We stood at the side of the lake, all holding our breath until the kind man cried out, “Look!” and pointed farther out in the water. The loon swam. He’d been underwater.

Now free, he turned from where he was, looked back at his smiling and celebrating protectors, and then was gone again.

I didn’t ask the names of these kind people. I wish I had. They did so much that foggy morning, on their way to wherever they were going. Three people who put a simple life ahead of everything they’d planned. Three strangers who gave me something I’d lost.

Elizabeth Kane Buzzelli is a novelist who lives in the Kalkaska area. Her novel, “And Then They Were Doomed,” will be re-released this November.