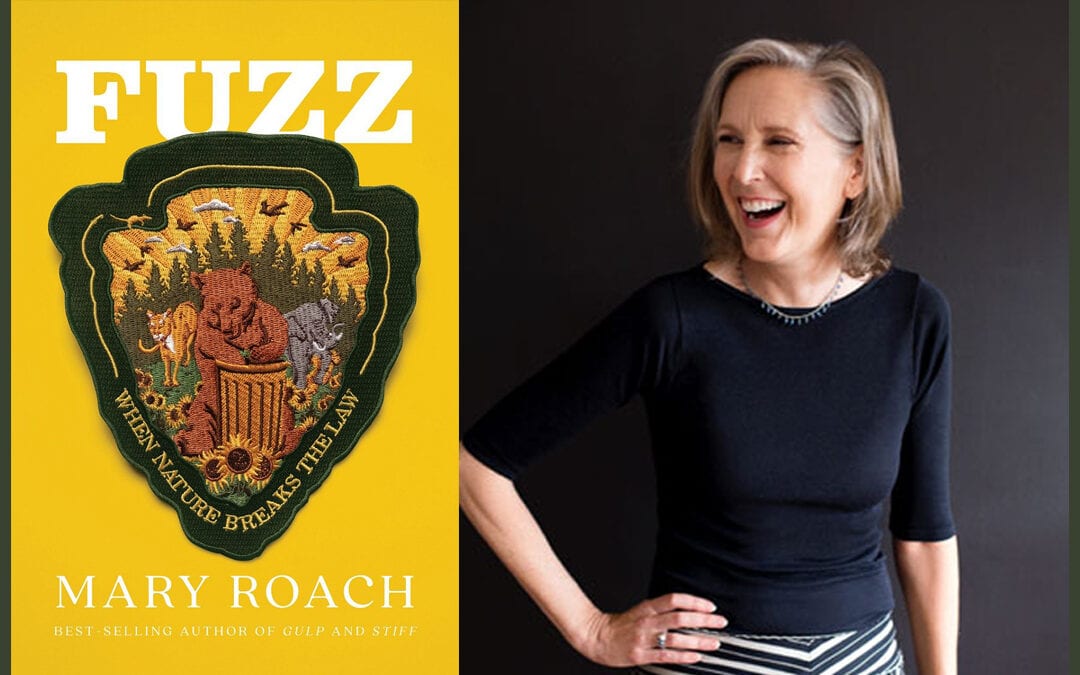 Roach is also hosting a Front Street Writers Masterclass the night prior, at 7 p.m. on Wednesday, October 6. This class (also virtual) is free for any Michigan high school student and preregistration is required. If you’re a student that struggles with making dull topics entertaining, or if you want to know more about the life of a working writer, this masterclass is for you.

After two decades of writing best-selling books about sex, death, warfare and space travel, author Mary Roach has come to cast her gaze on the animal world in her newest book, “Fuzz: When Nature Breaks the Law.” As part of her research for the book, she learned to identify animal attacks through forensic science, appreciate the dangers of drunken elephants and discovered all the different places that animals and humankind collide—and what happens when we try to control it.

It seems inevitable that this part of nature would eventually intrigue Roach, and as it turns out, writing about animals has been a part of her career since the beginning. In advance of her appearance at the National Writers Series on Thursday, we chatted with her about what she finds funny, how she landed in her science + humor niche, and we get ready to pitch a new TV show:

NWS: In my experience, scientifically minded people aren’t generally also terribly funny people. (Hilarious scientists of the world; please forgive me.) So I’m kind of wondering how you landed in this intersection of having one foot in science, one foot in humor—and what part of your background helped you find this niche.

Mary Roach: Oh, it’s just such a random collection of events. I took one science class in college because it was known to be a “gut.” An easy A. I took astronomy, and here’s what I remember: Io, Europa, Ganymede, Callisto, the moons of … was it Saturn? Or Jupiter. Jupiter, right?

NWS: I think so? Jupiter or Saturn. [laughs]

MR: Okay, so that’s all I remember from the science class I took in college, so I wasn’t math and science inclined by nature based on my performance my senior year. Whatever math class I had, I dropped because I realized I didn’t need that credit—it was going to bring down my average. I was a liberal arts major and I graduated in a recession, so I was like … “I don’t know, I could maybe do copy editing, I can clean up sentences.” So I started doing that, and I’m not very detail-minded, so that didn’t work.

I ended up writing magazine feature pieces and just really enjoyed it—partly for the writing but, but also just for the places that it would take me in. I found it really fascinating. There’s a Sunday Punch section of the San Francisco Chronicle, they had a humor essay section and I submitted some stuff to that and they ran it. At the same time I had a part-time job at the San Francisco Zoo in the Public Affairs Office, so that was a fun place to write.

Eventually, Discover Magazine contacted me based on some pieces I was writing for a magazine called Hippocrates which was based in health and medicine, kind of funny and fun. I spent 10 years at Hippocrates, which changed names several times and no longer exists, but I think that that was where I first combined the writing style.

And from there wrote for Discover and a couple of other places and then moved on to books. So, I guess it’s happened because of that magazine, which enabled me to do that kind of really interesting reporting, but to present it in a way that was not … I don’t want to say “straight science writing” because there’s lots of lively science writing, but not “science section science writing,” you know.

NWS: It’s fun that you cut your teeth writing at a zoo—did you find yourself kind of leaning back on any of your experiences there as you went into writing “Fuzz”?

MR: Well it was definitely animal-centric reporting. Everything that I was writing had to do with the animals for the most part. But no, I don’t think that really influenced the decision to write this book because, in general, I find that animals—while they’re incredibly interesting and appealing, delightful to watch and they’re really interesting to learn about—they’re not very quotable. [laughs]

NWS: To pivot away from animals for a minute, I’ve noticed that a lot of people focus on the animal parts of the book, but I haven’t seen many people ask about the “vegetable” parts of the book, which is also part of nature. Given your reporting, do you think that the non-animal part of nature is more dangerous despite all of the time that we spend fearing bear attacks and cougar maulings and the like?

MR: Oh yes, absolutely. We should be focusing on the very very tiniest of all animals. We’re in the midst of a pandemic, I mean those are the creatures that you really want to be afraid of. Yeah, the bacteria, viruses, even some molds. I don’t have the figures but I can tell you that between one and three people per year in this country are killed by bears—how many people are killed by bacteria and viruses? Millions. So our psyches are kind of miscalibrated, I would say. Absolutely.

NWS: You know, the alliterative question that I had for you was “are beans more dangerous than bears” but I didn’t even think of the bacteria “b” either.

MR: Yeah! You know, if you undercook your kidney beans you might have some tummy upset but it’s unlikely you’ll be done in by abrin or ricin. Unlikely that you need to worry about that but definitely deadly. I saw [a list] of common garden and house plants in the category of “highly lethal” and I looked around in our yard and I think there were seven or ten out there. Plants that are deadly—I mean, there’s no reason you’d be chowing down on rhododendrons or lantana [but] there was just a surprising list of plants that we are around every day that are deadly.

NWS: We just hosted author Pam Houston, and a lot of what she talked about is the effects of climate change on her ranch in Colorado. Since you just traveled all over the world talking to people about their experiences in nature and with animals, I wondered: How often did climate change come up?

MR: I didn’t ask about it because I didn’t think of it as being on topic, but I can tell you that every time you turn the corner, there it is.

Like, in talking to the bear researcher in Colorado. He brought up how hibernation periods are getting shorter because the climate is warming up, and you know for every couple of degrees Fahrenheit warmer the temperature is, the hibernation period of black bears is a week shorter. So over the coming years, [that’s] a fair amount of extra time where bears will be out on the land, looking for food [and] coming into conflict with people. So, it came up there.

It came up in New Zealand, too. I was talking about these yellow-eyed penguins which are endangered; they’re down to a few thousand. I was interested in the role that predators have played in invasive species—stoats and possums and feral cats—and the researcher said, “Well that is going on for sure, but it’s also the fish.” Because the fish that these birds eat, the water temperatures are warming and those fish are farther out, because they want to be in a particular water temperature.

And in order to get to that temperature, that colder water, they’re farther offshore and the penguins can’t dive that deep. So their food sources are being affected and that is affecting them. And so, even when you’re not looking for it or asking about it specifically, you just encounter those anytime you’re reporting on the natural world. You’re running into that over and over. It’s in everything. Just everything.

NWS: Finally, as I was reading the first chapter about learning how to identify animal attacks as crimes, it struck me that there could be a great police procedural TV show all about this. Do you have a “CSI: Bear Country” pilot script in the back of your head somewhere?

MR: Oh my God, that is such a great idea. I’m going to call my TV/film agent right now and get her to sell that. That’s a great idea—it’s probably in the works [already] but it would definitely be interesting.

Karl Klockars is the communications manager for the NWS. This interview was edited and condensed for clarity.