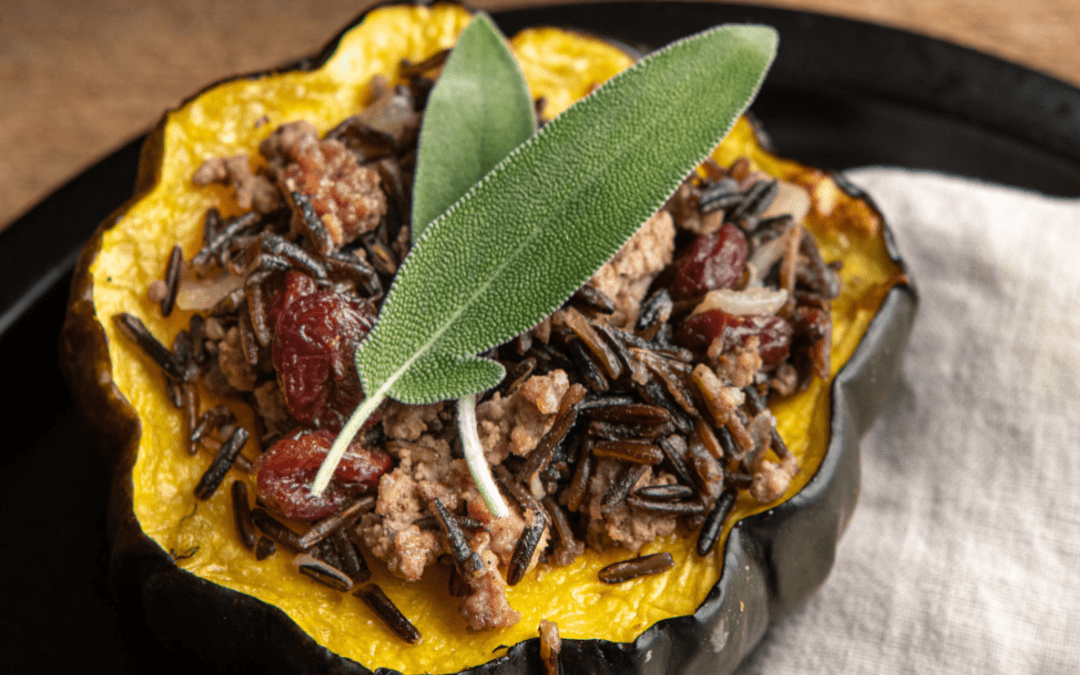 October’s On the Table recipe is an Indigenous-inspired one-pot supper that will warm your soul this season in Northern Michigan. Grab your local squash and get ready for this delicious bison and wild rice stuffed squash to become your go-to dish all Fall long. 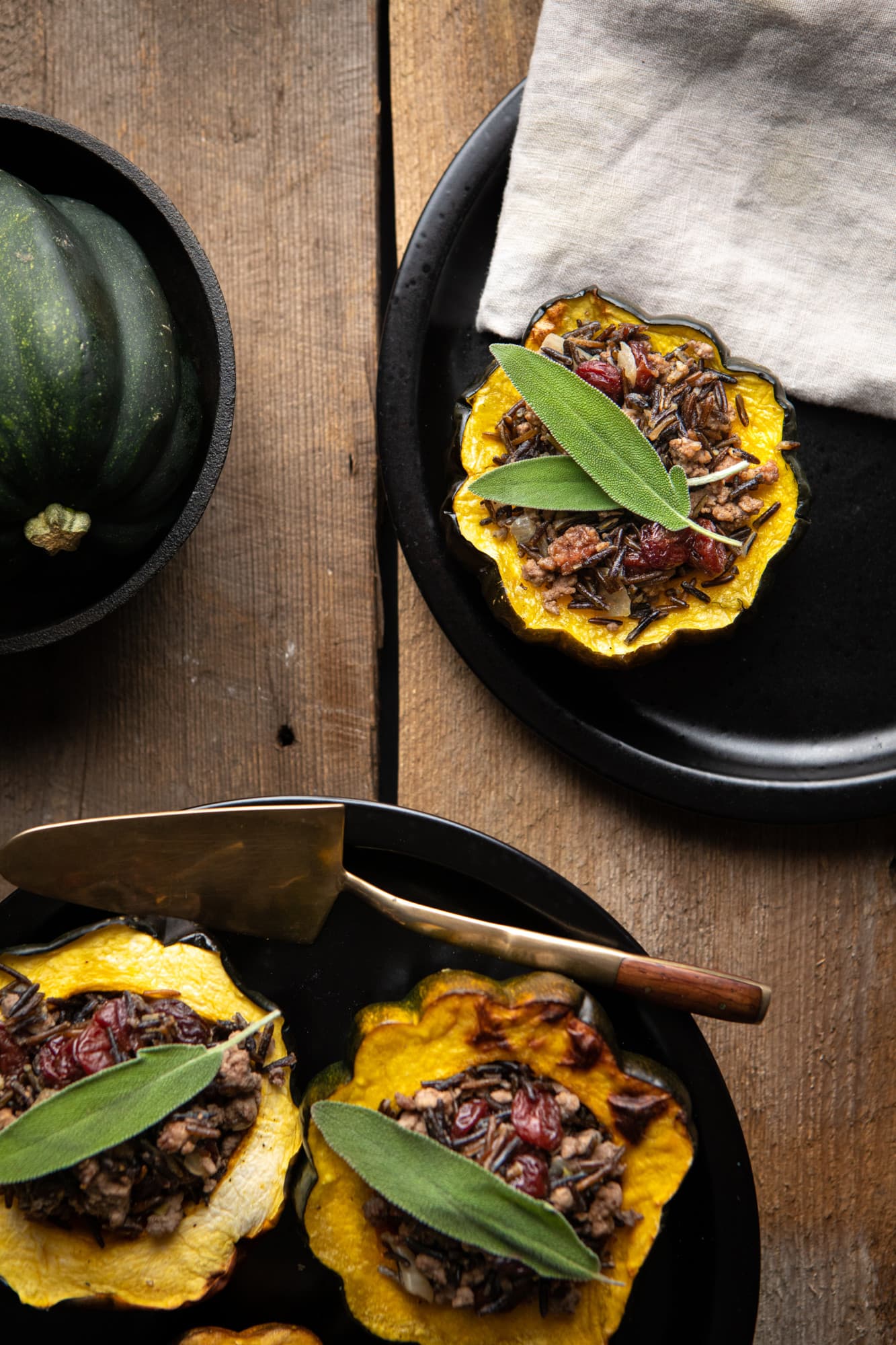 When my husband and I decided to leave Colorado and move back to Michigan, each of our kids picked one destination in their birth state that they wanted to see before we departed. One of them selected Mesa Verde, the ancient cliff dwellings of the Ancestral Puebloan people. This dovetailed nicely when, a few weeks later, we drove our U-Haul northeast and stopped at Crazy Horse, the mountain monument in South Dakota that depicts the Oglala Lakota warrior. When we crossed into the Upper Peninsula’s western edge, bookended by Lake Michigan to our south and Lake Superior to our north, we talked about the Ojibwe names for both bodies of water—michi gami and gichi gami, respectively. As we settled into our new Northern Michigan community that fall, our kids had a better understanding of the American Indians who predated us in our old home, in our new home, and even the journey in between.

In the weeks that followed, I was eager to learn more about the food traditions of Indigenous Americans and had several Native-authored cookbooks sent to my rural library. A friend introduced me to Michelle Leask, an Ojibwe citizen and co-proprietor of Maple City’s Little Traverse Inn, who was so gracious about sharing her family’s Winter Solstice traditions, and even gave me ceremonial tobacco, which the kids offered to Mother Earth.

As the days grew shorter that first fall, I started cooking. Inspired by the importance of bison, wild rice and squash in American Indian cookery, I created this recipe. At the time, I served it as a side dish, but it really shines as a standalone one-pot supper. Studded with manoomin (wild rice in Ojibwe) and dried cherries, it’s a comforting way for those of us who winter on the shores of michi gami to welcome “the season of storytelling,” as the darkest months are known to our Native friends. 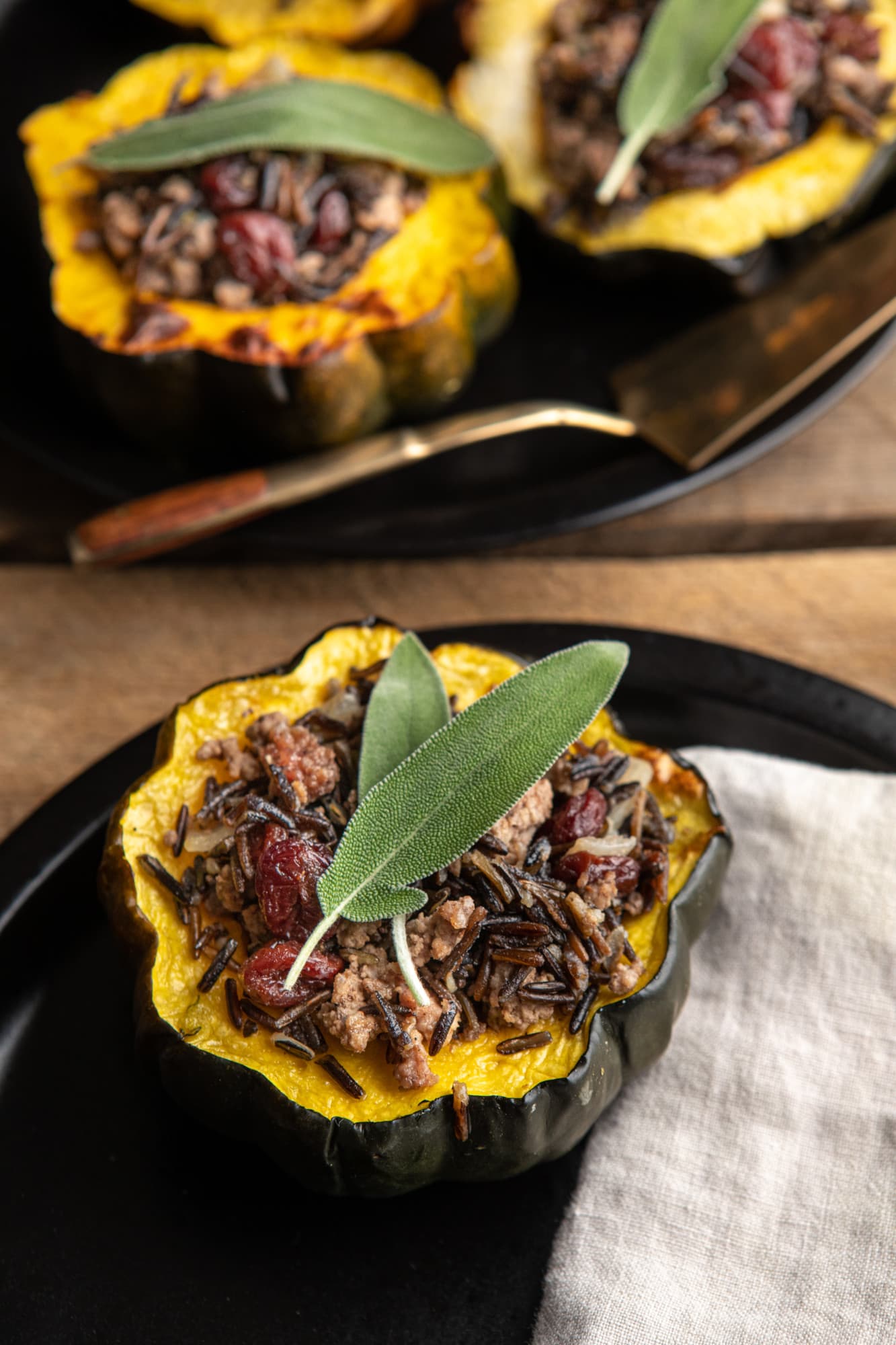 1. Preheat oven to 400 degrees.
2. Place squash, cut side up, on a baking sheet and drizzle 2 Tablespoons of the olive oil across the squash, spreading
it around each cavity with your fingers. Season with salt and pepper and roast until the squash is fork-tender but still holds its shape, about 50 minutes.
3. Meanwhile, make the filling. Drizzle the remaining 1 Tablespoon of olive oil into a skillet set over medium heat. Add the onion and sauté, stirring occasionally, until soft and translucent, about 3 minutes. Fold in the ground bison and move around in the pan from time to time, cooking until it is no longer pink but still tender, about 7 minutes. Stir in the cooked wild rice and dried cherries until heated through, about 2 minutes more.
Add salt and freshly ground black pepper to taste.
4. When the squash is fork-tender with a few brown blisters and any moisture that has pooled in the cavity is bubbling, remove it from the oven and fill with a heaping mound of the hot bison mixture. Top each stuffed squash with julienned sage and serve.
Stacey Brugeman is a Leelanau County-based food and beverage writer and editor. Her work has appeared in Food & Wine, Saveur, Travel + Leisure, Eater and Denver’s 5280, where she served as Restaurant Critic. Follow her on Instagram @staceybrugeman.

For more local restaurants, recipes and dining ideas, visit our Northern Michigan Food & Drink page, preview and purchase our digital issues or subscribe and get Traverse, Northern Michigan’s Magazine delivered to your door each month.