Dust & Heat : A Summer at Penn-Dixie in Petoskey 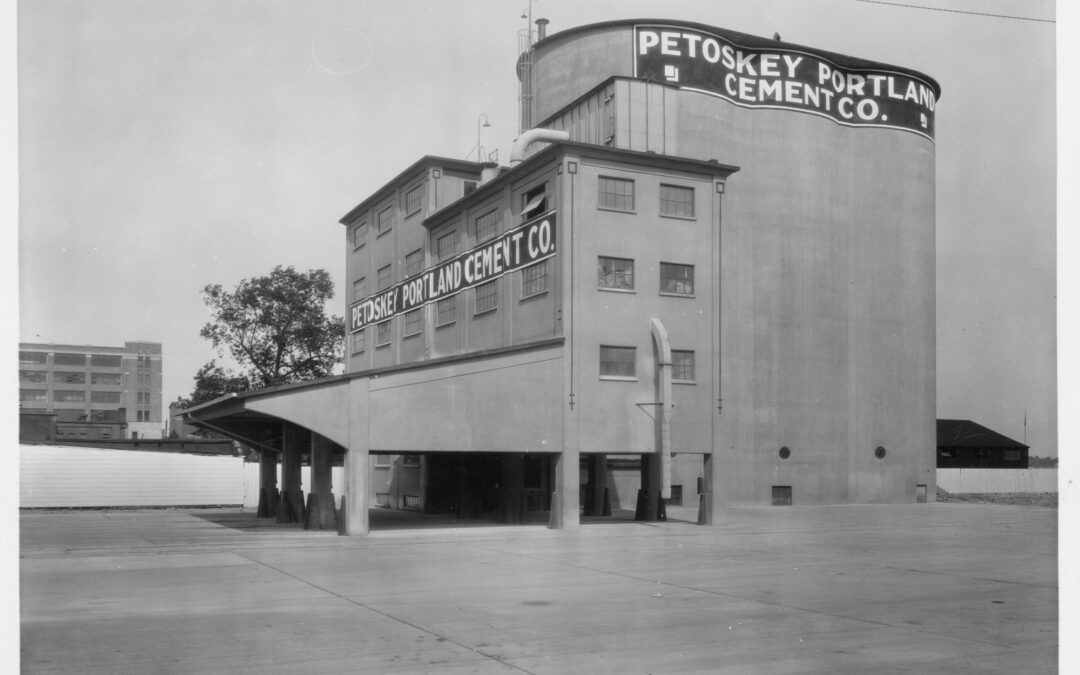 Fine cement dust, sweltering heat from the kilns and backbreaking work define a young college student’s summer at a Petoskey cement plant before its closure in 1981.

I wheeled off the Petoskey–Charlevoix road to the Penn-Dixie cement plant that sprawled along the shore of Little Traverse Bay. The road dropped into barren dust fields, over railroad tracks, between limestone quarries, then swung around a decrepit conveyor belt into the factory complex. I opened the car door to a cloud of fine cement dust and rhythmical, metallic racket. On the bay side, storage silos towered five stories high at the end of a broad pier where freighters from Chicago, Detroit and New York took on dry cement. On the other side, the production buildings angled against the sky.

A foreman greeted me, appearing gaunt and exhausted, with thinning hair combed up and over. “I had you come out now so I can show you the ropes. If we hire you, you start at 6:30.”

He walked me through several enclosures and curiously entangled machinery, rusted metal beams and gears, all bent upward like a monstrous, fractured rib cage.

“They don’t use it anymore,” he said.

We stopped at a cylindrical storage bin, 25 feet tall and 16 feet in diameter, half full of clay that was thick enough to stand on but soft enough for the shovel he tossed to the bottom. “Climb on down. Shovel that clay out that doorway in the back.”

I dropped down the ladder into the concrete bucket. “What is this place?” “Dirty,” he said, “but you shovel it out the back.”

So, I shoveled, the air heavy and hot, stomping, leaning back, tossing into the bin, until my mind wandered through my spotty freshman year at the University of Michigan, and my grandmother lying in bed with osteoporosis, her brittle frame collapsing within her. “I want to go,” she had said, and I shrunk inside at the cruelty life dispenses even to the saintly.

My job would not be with clay, but with cement dust, fine as chalk and part lime. It permeates, clings and stings, seeping into pores and up the nose. You move it and remove it, rake it and rest in it. It’s blown against doors like shifting dunes, shin-deep. Clouds of it drift in the air when I’d scoop and toss.

When making cement, limestone is mixed with silica and alumina and heated to 3,000 degrees, then poured into a rotary kiln—106 feet long, 16 feet in diameter—mixing the molten ingredients. The giant tube angles slightly, so the molten rock flows as it churns and makes its way down to the cooler—an enormous black, metal riveted box, 2,000 degrees inside, so hot it makes wind. Because of its age, the cooler had heat cracks where burning hot dust and tiny pellets could escape and build up into knee-high piles

Related Read: Take a step back in Up North time by visiting our Northern Michigan History page.

“You ever see the cooler before?” the foreman yelled above the roar.

He handed me asbestos gloves and a metal-framed mask with heat-resistant glass, screwed onto a broom handle, and opened a metal window on the cooler door with his own asbestos gloves to a blast like a devil’s slap.

He pushed me back from the heat. “Now take a look. Use the mask,” he said. I stepped forward to see molten rock flow into the cooler from the kiln. Then he pointed at the knee-high dust piles of hot pellets that had escaped the cooler. “That,” he said, “goes in there,” and pointed at the window. Just then, a coal the size of a pinhead hit my forearm and I jumped and swatted. “Better roll down your sleeves,” he said, and smiled. “Gotta clear all this out. You go in to the chains at the end of the week.”

I did not know what that meant, but I’d find out, and tossed a shovel-load, feeding the fire that scorched me.

At the other end—the “hot” end— chains with massive links hung from the curved wall, grinding the molten rock as it flowed to the cooler. Over time, limestone would crust up inside the chains, constricting flow. When this happened, they shut down the kiln with the door open to release heat until it was barely tolerable; the job was to walk across a plank over the cooler into the dark tube with lights, power cords and 15-pound handheld jackhammers. We pried apart the links, hoisted and hammered on the crusted walls, and ripped chunks into the hot, stagnant air.

Inside the kiln, there was nowhere for sound and dust to go. The jackhammer resounded like automatic gunfire, and dust hung too heavily in the air for flimsy paper masks workers wear that would saturate with sweat, collapsing on our faces.

But I didn’t care—if they could take it, I’d take it more. I started working seven days a week, double shifts, collecting 16 hours of double time.

As fall approached, I felt my brain shrinking, along with my language and spirit. I would take off nights to see my grandmother, who would cry with joy when I came in. One night she said, “Jimmy, care for something,” and I nodded. “What will you care for?”

My days ran into nights, and I escaped into dreams of sailing, and of rivers I was not fishing, the narratives of time on the water. As fall approached I realized I could not continue working at the plant.

I told the boss I was going back to university on Sunday.

“Yeah, but if you work through Monday, you get double time on Sunday and triple time on Labor Day.”

And that was that. Penn-Dixie fell into bankruptcy soon afterward, closing the doors on all those men, stunned and unemployed. A decade later, the plant was dynamited, dozed over and developed into Bay Harbor, as if it never existed.

I suppose this is true for all of us— dust to dust. Meanwhile, I can hear Grandma Annie, and wish I could show her now how deeply I care.

James McCullough is the founder of the University of Michigan’s Bear River Writers Conference, now in its 20th year. He’s authored two books, “Voelker’s Pond” (2003), selected by the Library of Michigan as a notable book that year, and “Echoes” (2018), a series of outdoor essays published by Deep Wood Press. Presently, McCullough is developing Artium of Northern Michigan: Writing Guidance and Coaching, offering workshops in literature, creative writing, college preparedness and workforce readiness. artiumnm@gmail.com