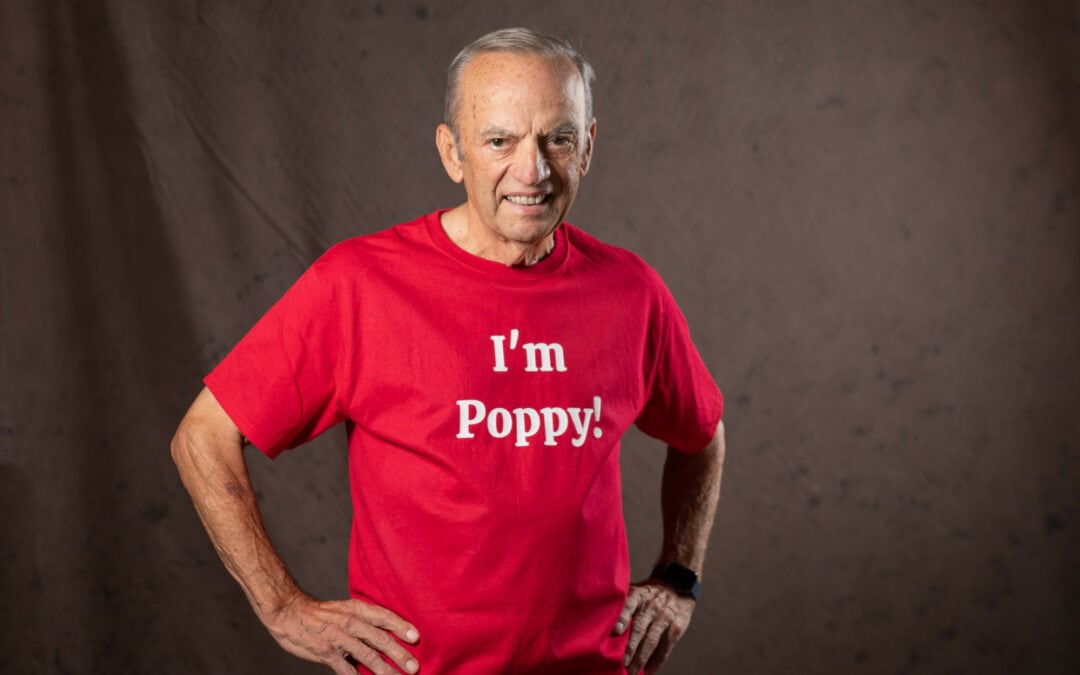 Defying the odds and breaking down barriers, John Bruder and Wayne Lobdell are courageous people who never give up. Through cancer and a Parkinson’s Disease diagnosis, both of these men are finding ways to incorporate an active lifestyle, a healthy diet and community support into their daily Northern Michigan lives.

At the North American VASA ski race in February of 2010, John Bruder watched skate skiers whom he’d easily pass, pass him. He chalked it up to a bad day. But after getting diagnosed with Stage 4 lung cancer 10 months later, he realized it might have been a tumor already at work.

John, a full-time orthopedic surgeon at the time, was an elite skier and cyclist. He enjoyed making a race goal and going all out to achieve it. When he wasn’t working, he was often working out. Each morning, he ran at 5:30 a.m. with his Traverse City neighbor and buddy, Jerry Glenn, an assistant principal at Traverse City Central High School.

But later in the summer months, he noticed a persistent cough that didn’t fade when fall set in. So, early one morning in December, on the advice of his doctor, he asked one of his techs to do an X-ray.

“After they did it, I watched the monitor, and immediately I’m seeing it. It was like getting hit in the face,” John says, choking up over the memory. “There were a couple of big snowballs in my right lung. I always thought I was healthy. I realized at that point, my life changed. I had lung cancer.”

After the diagnosis, John, at 64, made a list of all the things he wanted to do with friends and family before dying. He guessed he had six months. “I figured I was on the way out,” he confesses.

“We were all devastated,” says Jerry in a phone interview. “We thought he was gone.”

Over the next year, John underwent intense chemo and radiation to shrink the tumor. He took a temporary leave of absence from his orthopedics job but still managed to cross-country ski—the more laid-back classic style—every day.

And then came two surgeries—one for a ruptured disc that left him unable to walk from his garage to the house. A second major surgery 10 days later removed two-thirds of his right lung. The operation quite literally took the wind out of him.

“We had some hard times in there,” Jerry says. “He is quite private, he would never totally complain. He’d work through it. And during that time, he struggled with, ‘What can I do?’” 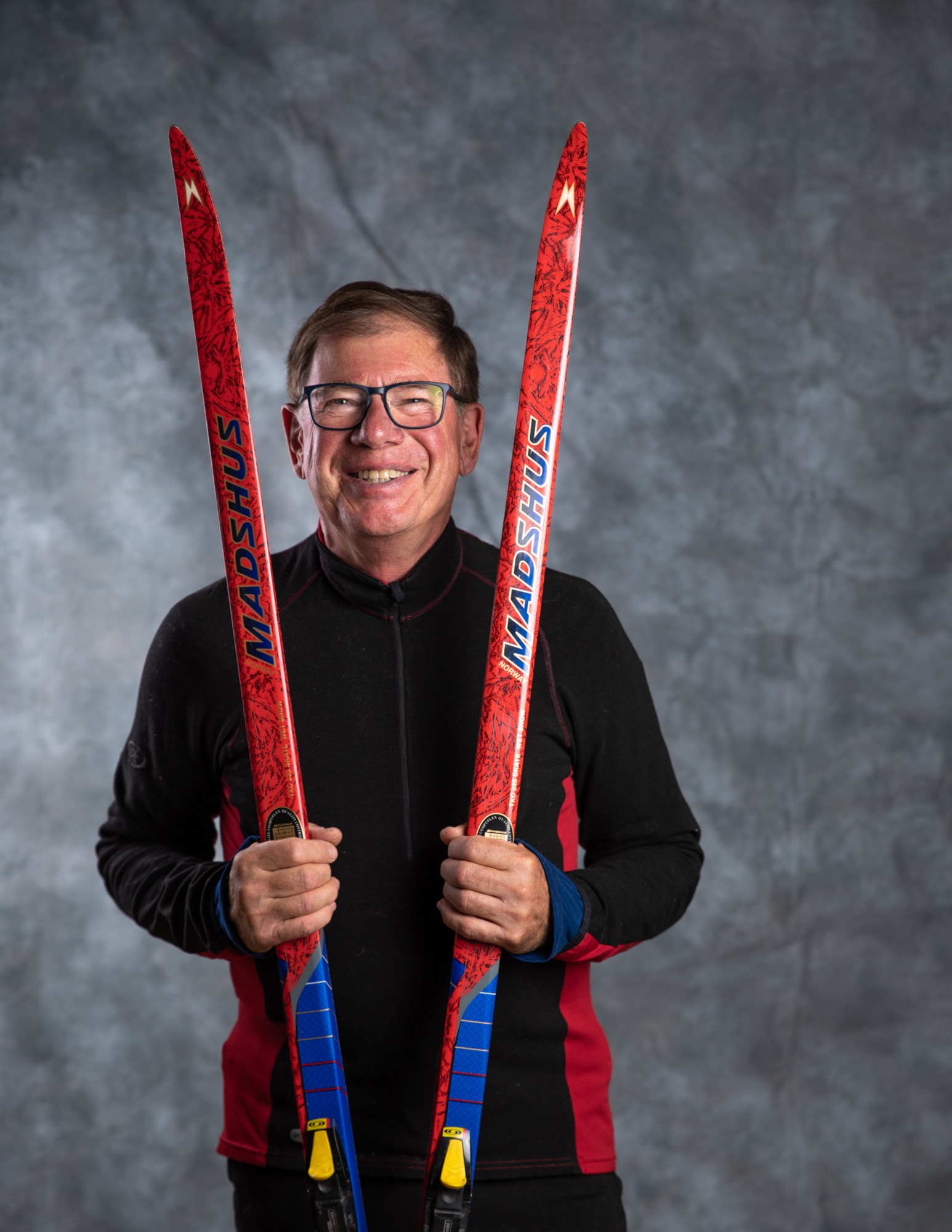 In 2013, John considered doing the VASA again—obviously not racing, but somehow being a part of the race. So, Jerry, who sits on the VASA board, came up with the idea of creating its first recognition race, a 12K, named “Ski with John.”

“We were going to create this group of people, and it was going to be the Bruder Wave,” says Jerry. “People who had never ski raced before decided to sign up. His nurse, she was there. So many people, it was just unbelievable.”

By the time of the race, 77 people had signed up. “It was a moving party,” Jerry says. “John led the way. He just couldn’t ski the way he used to, and we worked out a way to go out in the woods that didn’t require any hills at all. We had this train of people with John up front and several others positioned in front of him. He’s crying all the time, he’s that kind of person.”

For the race, John used an oxygen concentrator, which he carried in a backpack behind him. The device—about the size of a small melon—sucks in outside air and removes a portion of nitrogen to provide a higher concentration of oxygen.

John was able to return to work and retired four years ago at the age of 71. On the health front, it hasn’t been entirely smooth sailing; four times the cancer came back, and was treated with radiation, chemo and surgery. After each health setback, he pushed himself to stay active. He’s had no evidence of the disease for the last six years. Now 75, John and his wife, Carolyn Keith, live in Empire, and he still bikes, skies and hikes, especially in and around Pyramid Point. He also found a new sport—skijoring with their two dogs. “It’s great fun!” he says.

John still uses the oxygen concentrator to handle the tougher outings. But his multiple bouts with cancer have made him realize what he truly loves about exercise, and it isn’t necessarily winning.

“The key is doing these things with someone else so you can share your personal feelings, your experiences and not be out there by yourself, just pounding along and having only your thoughts to deal with,” John says. “It’s much, much healthier if you can share the experience with a friend. So that’s what I always tell people. Don’t just go walking. Get a friend to go walking, and then you’ll go every day.”

Related Read: Traverse City Dietitian Shares Tips to Get the Nutrients You Need. 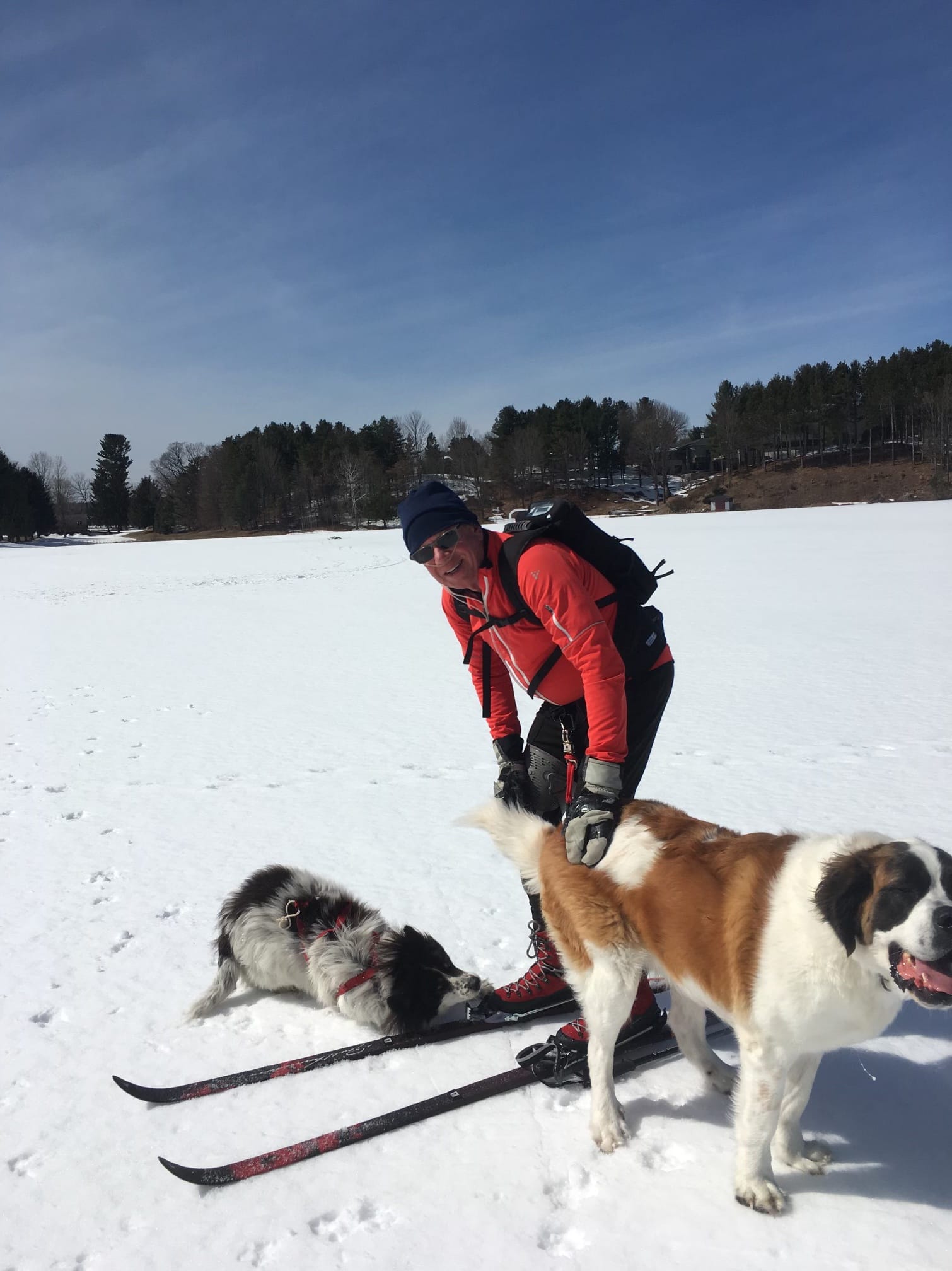 Exercise is the New Medicine

Twelve years ago, Terry Lobdell noticed that her husband, Wayne, wasn’t himself. There were random panic attacks. He couldn’t turn his neck when backing out the car. And then there was the morning the dog made a terrible mess and Wayne couldn’t smell a thing. With the symptoms adding up, Wayne went to see his doctor, who noticed long moments between his blinks.
“You need to be tested for Parkinson’s,” the doctor told him.

Soon afterward, he was diagnosed with Parkinson’s Disease— an incurable, progressive nervous system disorder that afflicts a million people in the U.S.—more than the combined number of people diagnosed with multiple sclerosis, muscular dystrophy and Lou Gehrig’s disease, according to the Parkinson’s Foundation.

Wayne first tried to sort out the age-old question. Why him? Most cases aren’t hereditary, but then he remembered a long-ago visit to his uncle who was bedridden, suffering the most advanced stage of the disease.

“When I went to see him, he was lying in bed, shaking, and having a very uncomfortable life going for him. I felt bad for him,” Wayne says. “So, when I got diagnosed, that picture came into my mind, and it was depressing. I made up my mind I was going to beat it.”

And so far, he has. At a recent doctor’s appointment, Wayne, 80, was told that after 12 years, his symptoms haven’t progressed since his original diagnosis. Although his speech is a little slurred and his memory less reliable, he is still in Stage 1, defined as a person with mild symptoms that don’t interfere with daily life.

“The reason why Wayne is where he’s at and is doing so well after 12 years is because he works at it,” she says. “He listens. He exercises, he watches his diet, he sings out loud, and he does it religiously. That abates his symptoms. If he were not to do it for a few days, his symptoms would blossom, and he would fall behind by six months for taking that time off, and it would take him that long to get back. He knows that.

”Molvang credits the brain’s neuroplasticity, the learning tool of the brain, which needs to be “seriously taught.”

“And you teach it by doing the same thing, the same time, in the same way, every day,” she says. “It’s repetition, and it becomes almost like a drug for the brain. Exercise is the new medicine. It will not cure you, but it will slow down the symptoms.”

When first diagnosed, Wayne vowed to do everything in his power in all realms of his life—spiritual, physical, mental—to ward off the onset of symptoms. When it came to exercise, he was ahead of the curve. For years, he ran after work to relieve the stress of managing his restaurant franchises. Now he runs two miles, strength trains and plays golf. His fitness goal is to attain the same level of performance as the day before.

“I recognize that I am a little more forgetful and that I can’t run as fast as I used to, but it’s important to keep going,” says Wayne, still looking trim and fit. 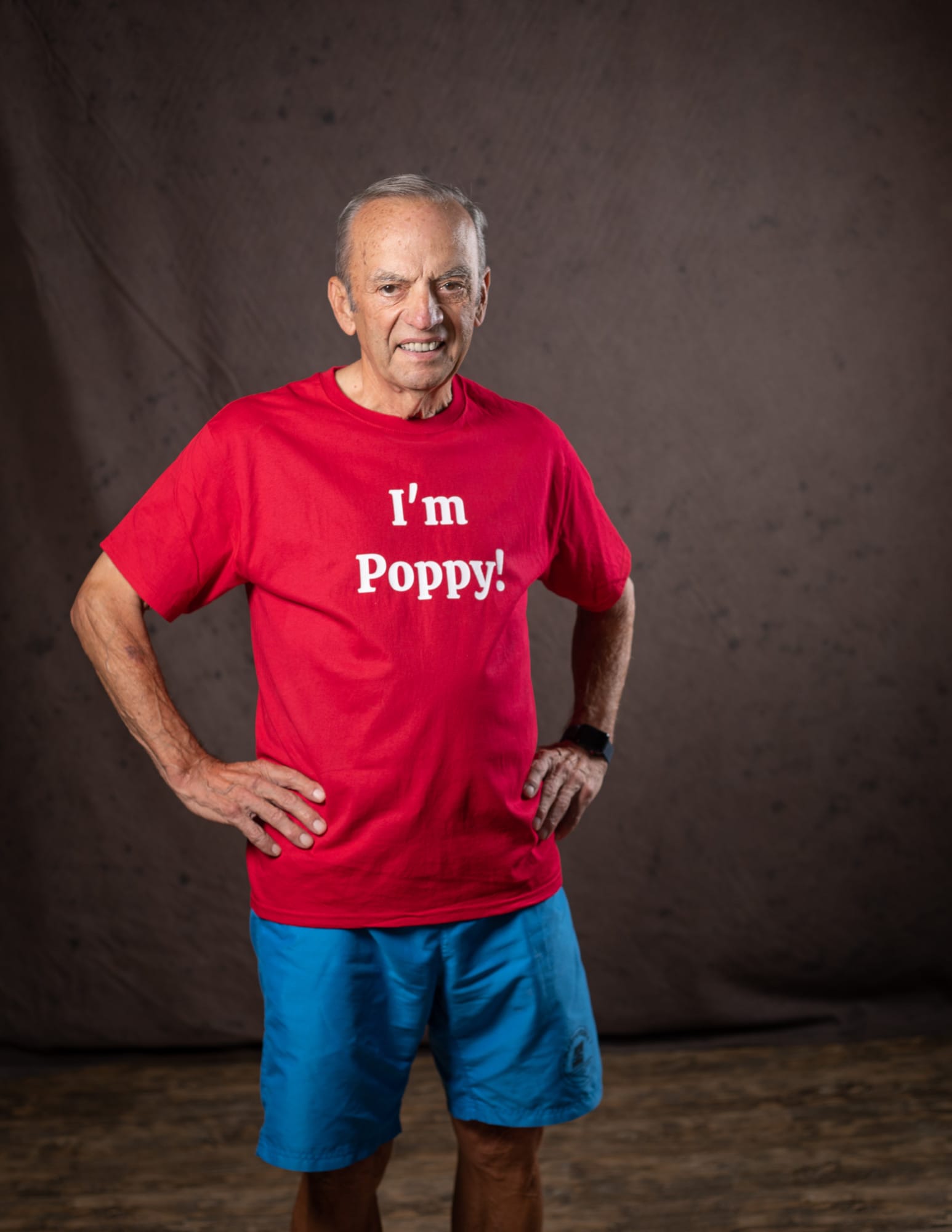 His advice is to choose an exercise you love that will get your heart rate up. Early on, he embarked on an innovative exercise regime—LSVT Global—that works on balance, shoulder flexibility, large movements and strength training with bands.

“He was Mr. Twinkle Toes, running sideways, all this intricate exercise, and he was faithful to it for a very long period of time,” Terry says.

He also faithfully eats a Mediterranean diet high in fresh vegetables and fruits and mostly fish for protein. “It’s supposed to be the best diet for people with Parkinson’s,” Wayne explains.
The diet reaps big benefits when it comes to heart health, weight maintenance and reducing the risk of chronic diseases. But studies show the plant-heavy diet can also reduce the risk of neurodegenerative disease, reduce constipation and play a role in memory function, writes Heather Simpson of the University of Florida Health (Aug. 3, 2020).

To keep his brain fit, he plays cards, dines with friends, follows horse racing, attends business meetings and keeps an eye on the news except when it gets “too darn stressful.” He even published a novel a few years ago. On the spiritual side, he meditates daily and attends church. His philanthropic endeavors also keep him happy.

Besides seeing a traditional physician, Wayne consults with a functional doctor at the Center for Personalized Medicine (locations in Traverse City, Ann Arbor, Grosse Pointe and Bloomfield Hills), who prescribes a supplement regimen. Wayne estimates he spends about $2,500 annually, none of it covered by insurance.

“Unfortunately, some of the things you can do are costly and it’s unfair that people who don’t have the means can’t necessarily do it,” he says.

Finally, he is strategic about his medicine that corrects his body’s dopamine levels, which drop with Parkinson’s and cause dyskinesia, such as hand tremors or shaking. But as the dose is increased over time, the medicine can actually cause dyskinesia, the very thing it’s meant to resolve.

That’s why Wayne has sought to retain the same low dose over 12 years—and he has. His strategy has been to divide his short-term single dose of carbidopa/levodopa into six different doses, which he takes every two hours. (The extended-release pill doesn’t agree with him.)

“I think anyone who lives with a person with an issue really appreciates it when they’re proactive and very good at taking matters into their own hands,” Terry says.“His pill distribution is very complicated and I’m so glad he’s the one doing it.”

At the time of the interview, Wayne, who turned 80 in March, was ramping up his mileage for the Priority Health 5K, a National Cherry Festival race in July. Some 40 friends and family members were also training to join him, planning to wear red shirts saying, “Poppy’s 80!”

“The rule is they can’t show me up,” he says laughing, adding that he will lead the race.

Anne Stanton is the co-founder of Traverse City’s National Writers Series. She served as a researcher/editor for two New York Times-bestselling books, works as a freelance writer/editor and is the editorial director for Mission Point Press.