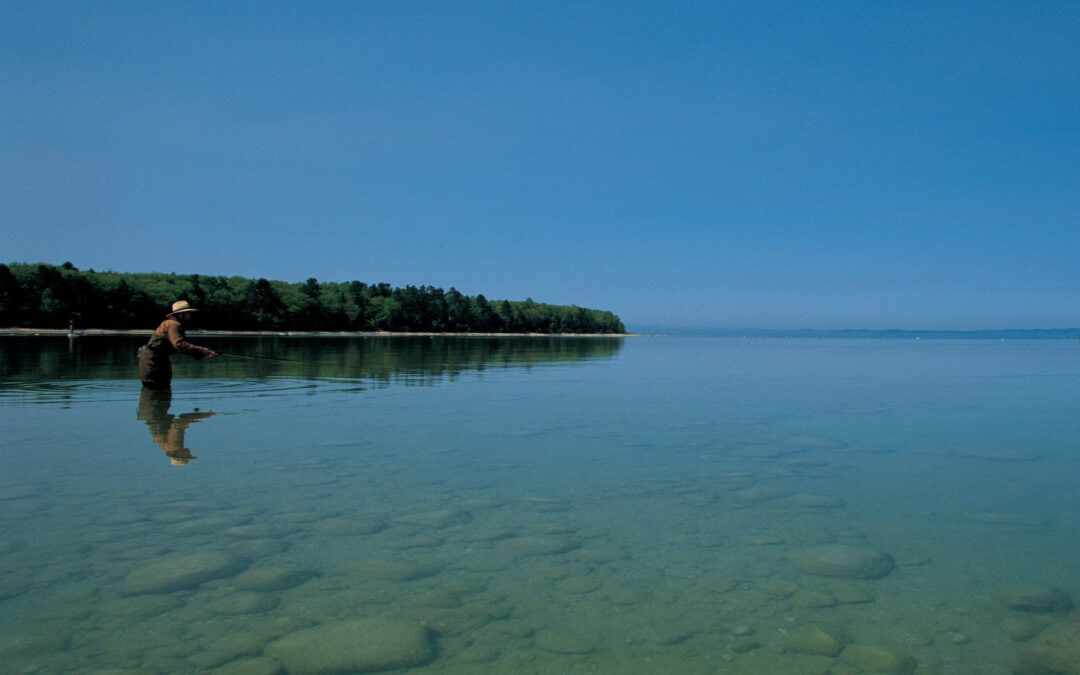 The Michigan DNR Fishing Report for the week of September 8, 2021, shows that finishing conditions are excellent in the Northwest Lower Peninsula and the Upper Peninsula of Michigan. Keep an eye out for lots of lake trout, chinook and coho. Find your fishing ground below and check out what’s biting.

Frankfort: Chinook salmon were moving into Betsie Bay and up the river. Coho were reported in Platte Bay.

Manistee: Boat anglers targeting salmon caught a mix of Chinook and coho. The best offshore catches were in 120 to 250 feet of water. Boat anglers were also catching Chinook in the Big Manistee River and in Manistee Lake. Catches in Manistee Lake were from using jigs, offshore J-Plugs, spoons and meat rigs.

Harbor Springs: Chinook and coho were caught in 60 to 100 feet down over 100 to 130 feet of water. Lake trout were caught as shallow as 85 feet down. Boat anglers were fishing from Wequetonsing to the Point mainly for salmon. Some anglers were going north around the Point for lake trout. A few smallmouth bass were caught in the shallows along the shoreline in the bay.

Charlevoix: Boat anglers were fishing around the cement plant and mainly using spoons, plugs and flasher/flies. A couple Chinook were caught 60 to 70 feet down over 90 to 100 feet of water. Anglers fishing the channel in Charlevoix for smallmouth bass caught quite a few large fish. A couple of freshwater drum were also caught. Anglers primarily fished the bottom with real and artificial worms.

Petoskey: Boats were mainly targeting the area just outside of the Breakwall for salmon, with some fishing as far as Bay Harbor. The early morning bite was productive for salmon. Salmon were caught 60 to 70 feet down and some lake trout were caught around 100 feet down near bottom. The Bear River was running at a good level. A couple salmon were spotted. Anglers were using flies, artificial single eggs and spawn at the dam.

Ontonagon: Lake trout fishing was productive. Near limits of three-to-five-pound fish were seen with a few 10+ pound fish reported. Spoons were the lure of choice between 80 and 120 feet of water. On Ontonagon River, dock anglers were catching rock bass, bullhead and a few small walleye.

Union Bay: Anglers were finding decent success while trolling for lake trout with a few heavier fishing being caught.

Black River Harbor: Success was moderate for lake trout. Some anglers were fishing in 60 feet of water, while others were out in 200 feet.

Keweenaw Bay: Most anglers were marking plenty of fish from 60 feet to the surface. Most anglers who had success were trolling from 100 feet up. Anglers were catching mostly Chinook salmon, but they also caught coho, lake tout, rainbow trout and pike. Most of the catches were on artificial bait and anglers were successful on average in the mornings.

Munising Bay: Boat fishing pressure was low with scattered boats out for coho and lake trout. Trolling performed the best with a combination of spoons – try watermelon colors, florescent colors and moonshine spoons. Lake trout anglers reported some decent catches in around 120 to 150 feet of water near White Rocks and Wood Island Reef, but catches were scattered. A few splake were reported by boat anglers trolling for coho. Shore anglers on the Anna River dock caught a few splake.

Grand Marais: Boat anglers reported nice catches of lake trout with most fish averaging around three to four pounds with a few fish over 15 pounds. Anglers were fishing towards AuSable Reefs and west towards the Hurricane and Five Mile Reef. A few boat anglers were trying for coho with only a few fish reported.

Big Traverse Bay/ South Portage Entry: Fishing in Big Traverse and South Portage Entry picked up slightly with salmon and trout. Anglers were catching pike while casting in weed beds and in shallows. Trolling had been most successful in deeper water and mostly in the upper half of the water column. Most fish were caught around the evening.

Marquette: Good amounts of lake trout were caught. Anglers were out looking for salmon and a handful were reported.

Little Bay de Noc: Anglers targeting walleye had mixed results. Most anglers were trolling, but some were jigging with minnows. Efforts seemed to be concentrated around Portage Point and north of Gladstone. Some anglers trolled around Minneapolis Shoal when wind permitted. Perch fishing was slow for most, with some enjoying limited success when using minnows. Crawler harnesses trolled or drifted were the most effective way to target walleye.

St. Ignace/Les Cheneaux: Anglers were fishing St. Martins Bay area and Nunns Creek for Chinook salmon. Anglers were catching a few pike throughout the Hessel and Cedarville areas. Splake have not made their way into the marina in Hessel yet, however, anglers are starting to look for them.

For more local bike trails and outdoor adventure ideas, visit our Northern Michigan Outdoors page, preview and purchase our digital issues or subscribe and get Traverse, Northern Michigan’s Magazine delivered to your door each month.