From Our Cellar: What to Drink this Month in Northern Michigan 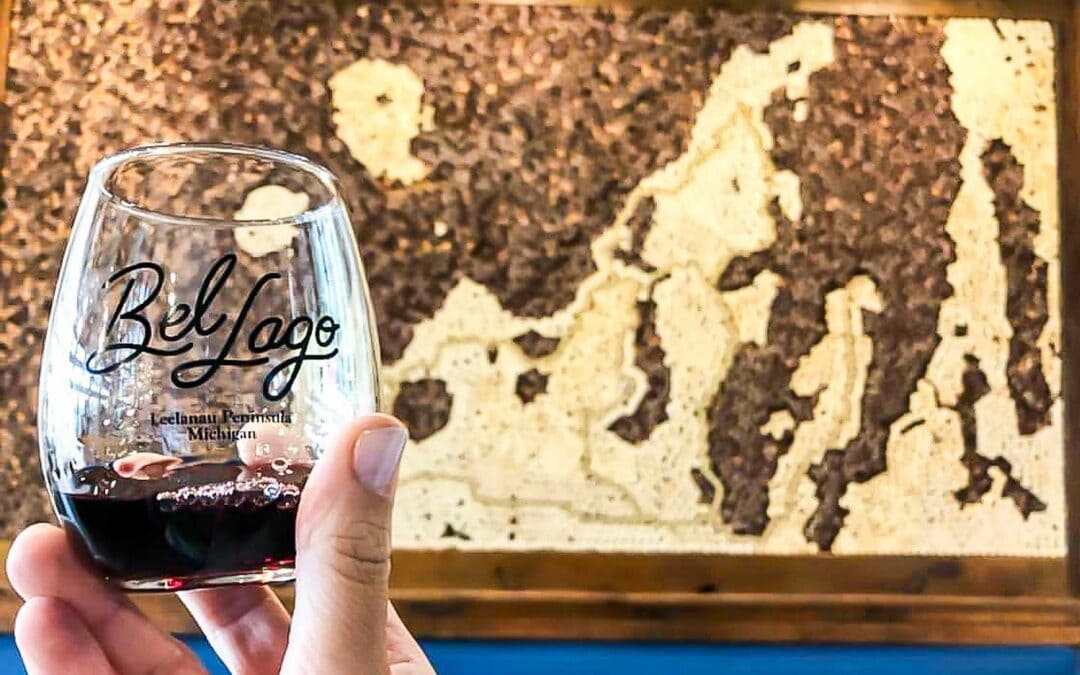 Every month, Traverse Magazine’s Culinary Columnist Stacey Brugeman asks Northern Michigan beverage experts what they’re drinking. In “From Our Cellar” she shares the Michigan wines, beers and ciders that area sommeliers, beer buyers, beverage directors, cider geeks and other pros are especially excited about. In addition, each month Stacey writes “Last Call,” featuring a cocktail’s Northern story and the recipe, included below.

September’s From Our Cellar

While Zingerman’s Creamery may be known for its cheese and gelato, the 20-year-old outfit also sells Michigan wines, like Cedar’s Bel Lago 2018 Pinot Noir. Brad Hedeman, who travels the world researching which imported products the Ann Arbor institution carries, loves that this bottling “has the terroir of Northern Michigan. ”The freshwater lakes and bays make this a more delicate pinot,” he says. The globe-trotting “food finder” recommends grabbing a local baguette, a tub of Zingerman’s pimento spread and sipping this peppery pinot until it’s time to light the grill.

Every fall, the nation’s foremost beer experts gather to judge one of the highest honors in brewing—medals from the Great American Beer Festival. While we wait with bated breath to find out who the 2021 winners are, we’ll be sipping one of 2020’s silver medalists, the Stormcloud 228 Tripel. This time last year, the Frankfort-brewed sud beat out more than 100 other entrants in the Belgian- Style Abbey Ale category. This golden, light-bodied beer has layers of light spice and stone-fruit aromas—a classic tripel brewed right here at home.

September’s ‘Last Call’ cocktail recipe crafted by Stacey Brugeman is the Spicy Whiskey Cider Collins. Featuring fresh Northern Michigan cider and apples, this versitle coctail is perfect to sip on all fall long! Make it for your next fall dinner party or to enjoy during your next backyard bonfire. 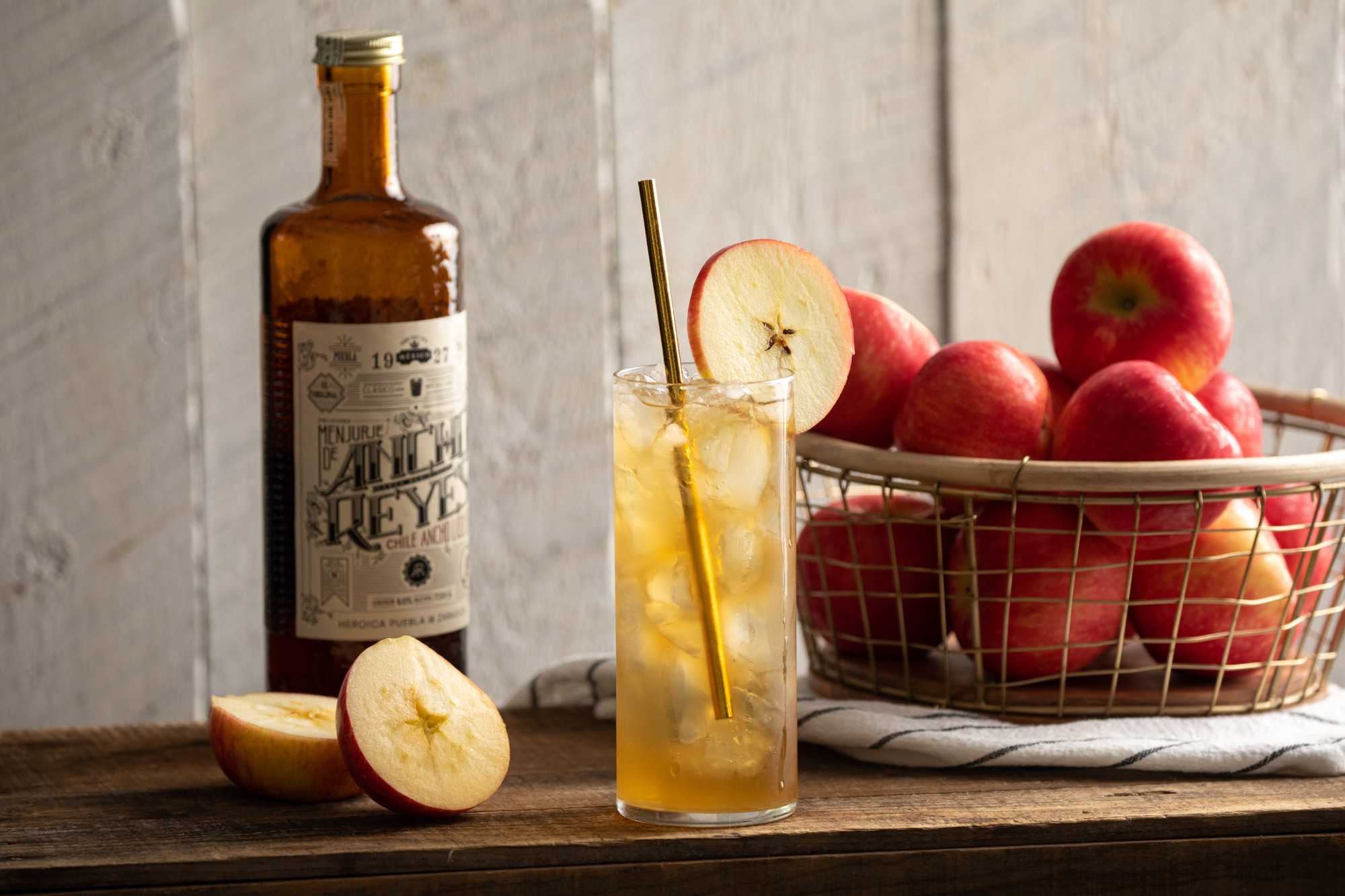 August’s From Our Cellar

Rachel Van Til, an Old Mission native who is now an advanced somm at The Clubs at Houston Oaks, loves drinking Michigan wine in the Lone Star State. She’s especially excited to have access to the lesser-known 2019 Left Foot Charley Kerner there. “This wine was made for Sauvignon Blanc drinkers, with generous aromas of lemongrass, ginger, lime candy and jasmine,” Van Til says of the bottling, which tolerates being served extra chilled during the hot summer months.

Walloon Lake’s Barrel Back restaurant has been committed to a dynamic beer list since they first opened their doors. This summer, the lakeside bar team loves pouring the Cheboygan Brewing Co. Blood Orange Honey. This ale is the perfect alternative to a summer shandy—with hints of fruit flavor but a stronger beer backbone. For a wheat beer, it leans more crisp and quaffable than it does yeast-y, but has the foamy head and mouthfeel of a good witbier.

Find Blood Orange Honey by Cheboygan Brewing Co. Near You | $9 for 4 10-ounce cans 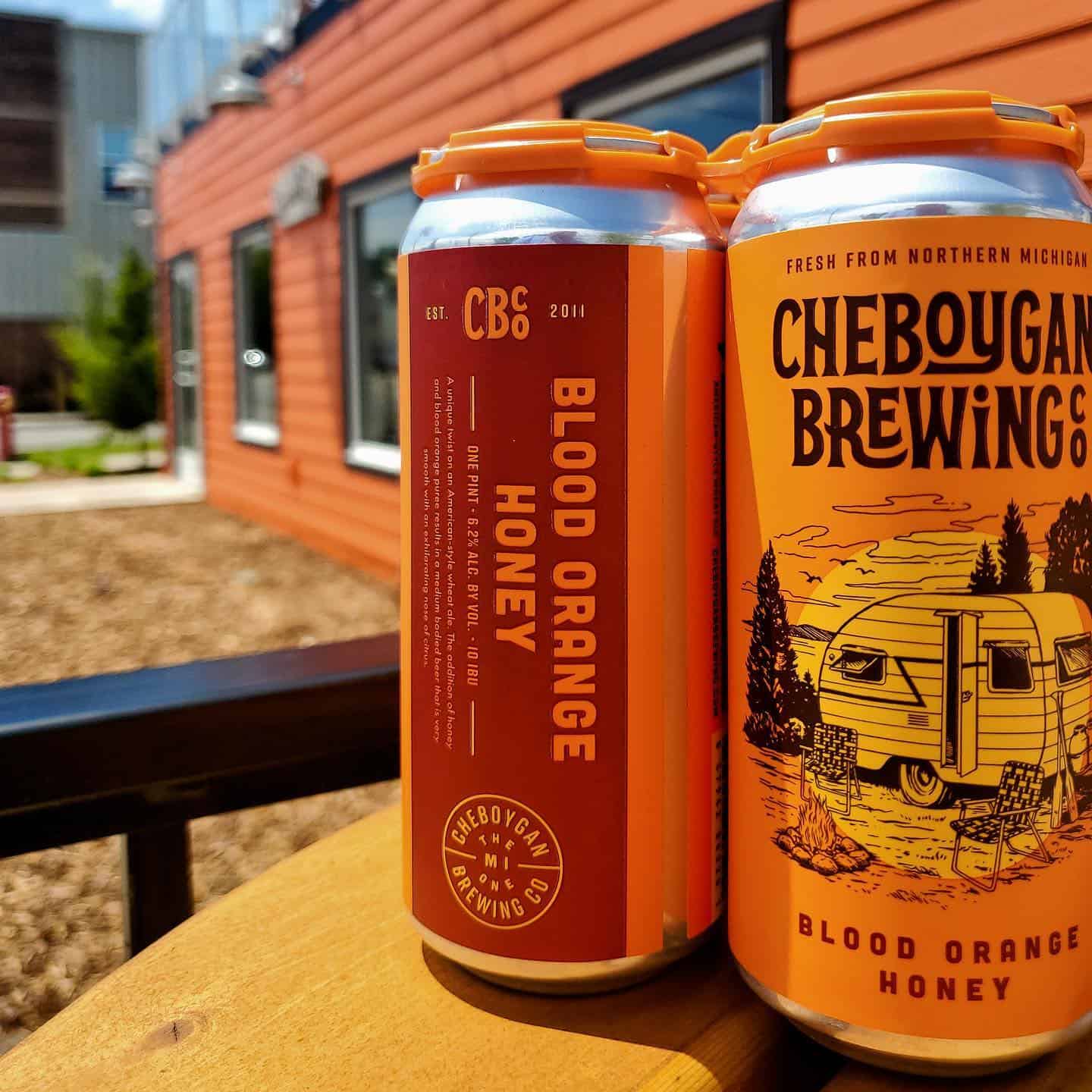 August’s ‘Last Call’ cocktail recipe is Barnyard Pisco Sour. This cocktail uses farm-fresh, Northern Michigan eggs and is perfect for any celebration. Learn more about this cocktail and view the full recipe crafted by Stacey Brugeman. 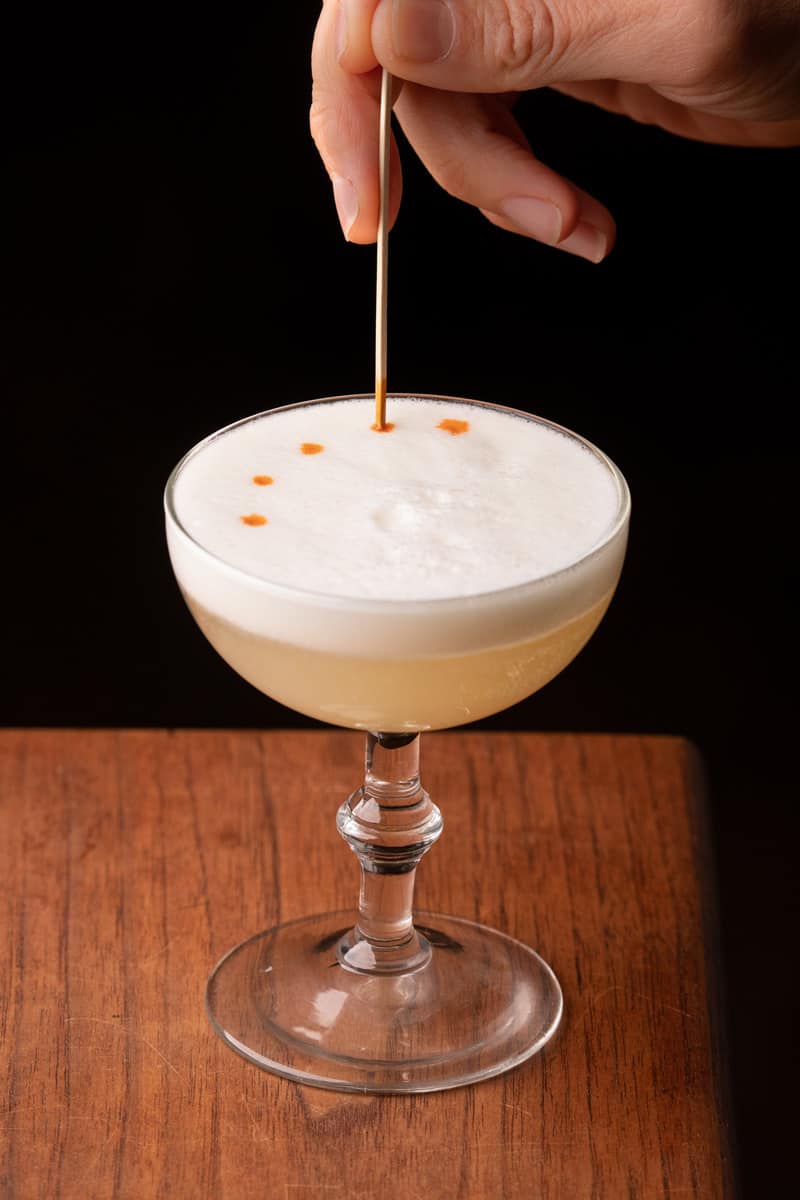 July’s From Our Cellar

Marcella Krupski at Marquette’s Everyday Wines, one of the most carefully curated wine shops in NoMi, raves about the 2018 45 North Vineyard & Winery Dry Riesling from Lake Leelanau.“With notes of Meyer lemon, under ripe peach and tart green apple, this wine has many of the hallmarks of a German Kabinett Trocken Riesling,” the certified somm says. Krupski pairs it with a citrusy kale salad, whitefish or even brats with sauerkraut.

Jason Kasdorf, general manager for Traverse City’s 7 Monks Taproom, recently turned us on to the Kratochvil Pilsner from The Filling Station on the north end of Boardman Lake.“This is a daily drinker,”the Certified Cicerone says of the crisp beer with floral and grassy notes. The straw-colored bohemian beer takes its name from Frank Kratochvil, a pre-prohibition era brewer who was known for his Grelickville-made pilsner.

View Kratochvil Pilsner from The Filling Station | $8 for four cans

July’s ‘Last Call’ cocktail recipe is a Black Raspberry Shrub. While this drink is alcohol-free, it doesn’t make it any less delicious for summer. Learn more about drinking vinegars and view the full mocktail recipe, crafted by Stacey Brugeman. 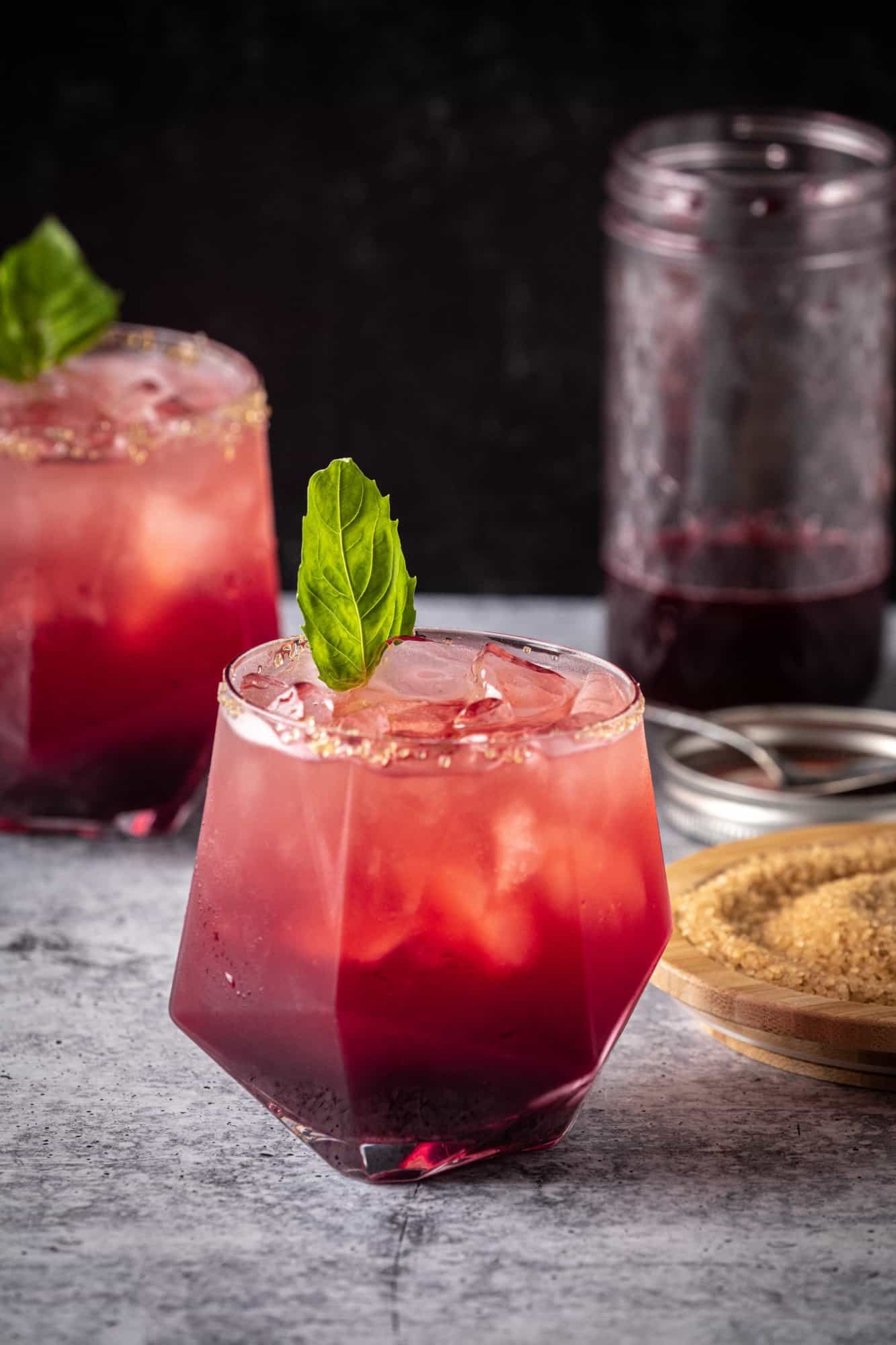 June’s From Our Cellar

Todd Chinnock of Pour Kitchen and Tap 30 in Petoskey is a fan of Upper Hand’s Dry Kriek. Beers from this Escanaba-based division of Bell’s Brewery haven’t previously been available south of the Mighty Mac, but they recently partnered with lower Michigan distributors to get their suds on downstate shelves. This sour ale is finished in red-wine barrels, giving it “a delicious little Brettanomyces sort of funk,” says Chinnock, a certified sommelier. 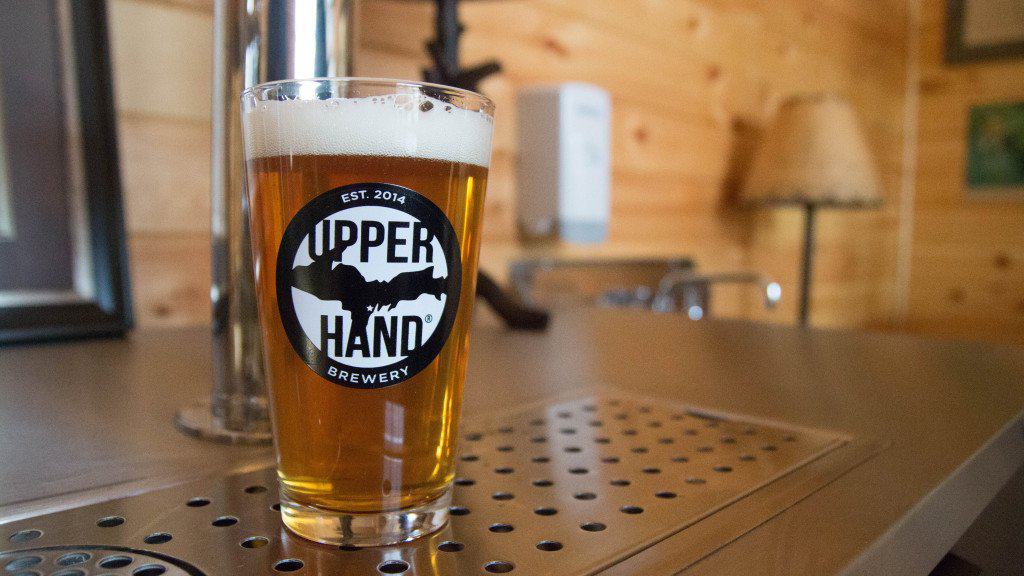 What better way to celebrate our longest days of the year than with a little sunset rosé. Master Sommelier Elizabeth Schweitzer, who runs the beverage program at Mackinac Island’s Grand Hotel, recommends the 2017 Bowers Harbor 2896 Brut Rosé. With floral pink roses and a cherry blossom nose, this dry, pinot noir sparkler from Old Mission Peninsula is “elegant and classy,” Schweitzer says.

You can find this mule being served up at the Keweenaw Mountain Lodge all summer long. Featuring Copper Queen Whiskey from Iron Fish Distillery, fresh lime and ginger beer, we’re convinced this cocktail will keep you cool on even the hottest summer days.

View the story behind the Miner’s Mule and the full recipe here.

As springtime temps warm, many will turn to quaffable beer styles such as blondes and pilsners. Kyle Hunt, the owner of Cøllect, a rooftop beer bar in Detroit’s Eastern Market, recommends the Farm Club Pilsner—brewed in Leelanau County with Hallertau Mit- telfrüh and Saphir hops. “Good pilsners are hard to come by and this one is great—very clean and crisp,” Hunt says.

The May Wine Feature:
Mari Vineyards Row 7 | $85 per bottle

For those many still-cool days, Alex Truck, sommelier at Aerie, the Acme restaurant known for its award-winning wine list, suggests the 2017 Mari Vineyards Row 7. While a planting gaffe makes the varietals in this Old Mission row unknown, the elegance of this bold Bordeaux-like blend is no mystery. At home, Truck recently paired it with Anthony Bourdain’s meatloaf.

This month’s featured cocktail is a delicious twist on the centuries-old gimlet. Featuring a homemade rhubarb cordial, this original cocktail was created just in time for spring. View our recent article for the full rhubarb gimlet recipe. 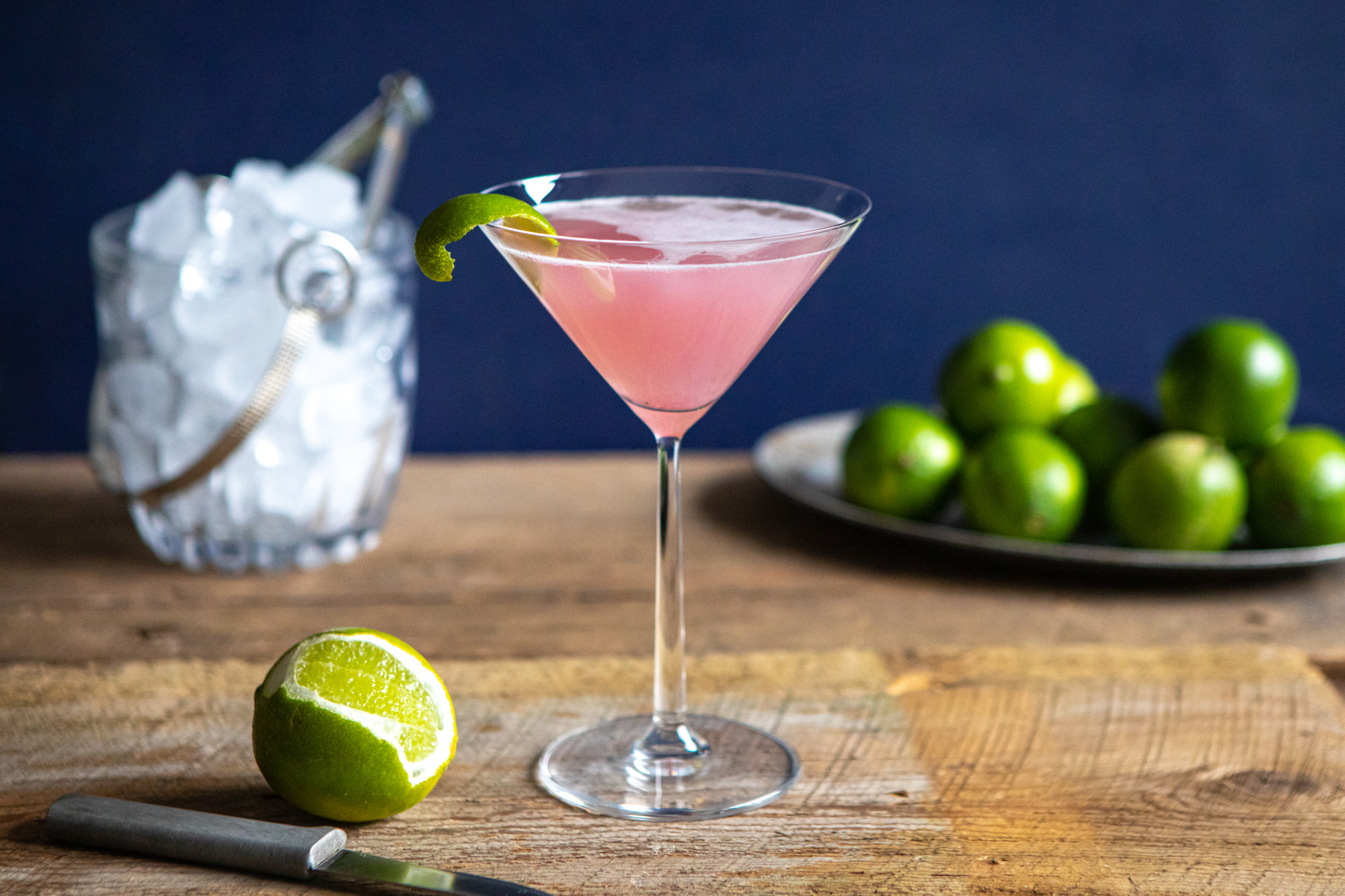 Serving something sweet for Easter brunch or Passover Seder? Pair it with the 2019 Chateau Grand Traverse Late Harvest Riesling, which Tom Renkes of Symons Wine Cellar in Petoskey recommends. “With layers of apricot, orange peel, vanilla and a hint of honey, this wine is a perfect example of late harvest grapes picked at peak ripeness,” Renkes says of the Old Mission bottling. 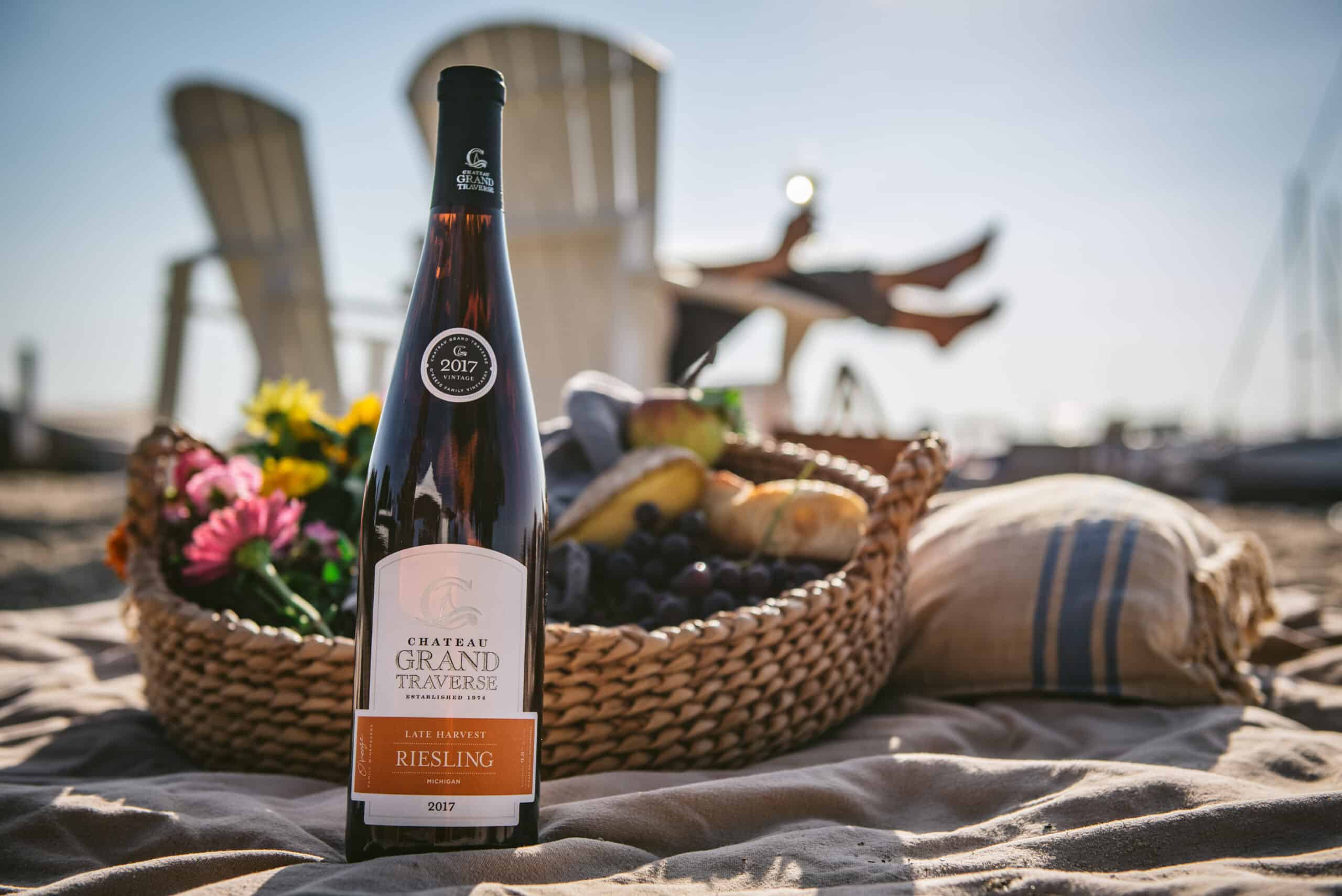 More of a bone-dry drinker? Try the Two K Farms Old World Cider. Made with 20 different French and English heritage apple varieties, the complex brut cider from Suttons Bay has “less sugar than a hard seltzer,” Karl Tessin of The Beverage Company in Traverse City tells his customers.

East of the Mississippi, ramps are the quintessential harbinger of spring. When this member of the onion family emerges from the forest floor, foragers know that Northern Michigan’s growing season is just around the corner. Playfully replacing onion, this twist on a Gibson brings together vodka, vermouth and pickled ramps for a seasonal favorite you’re sure to love. Grab your ingredients and learn how to make a delicious Ramp Gibson from the comfort of your own home. 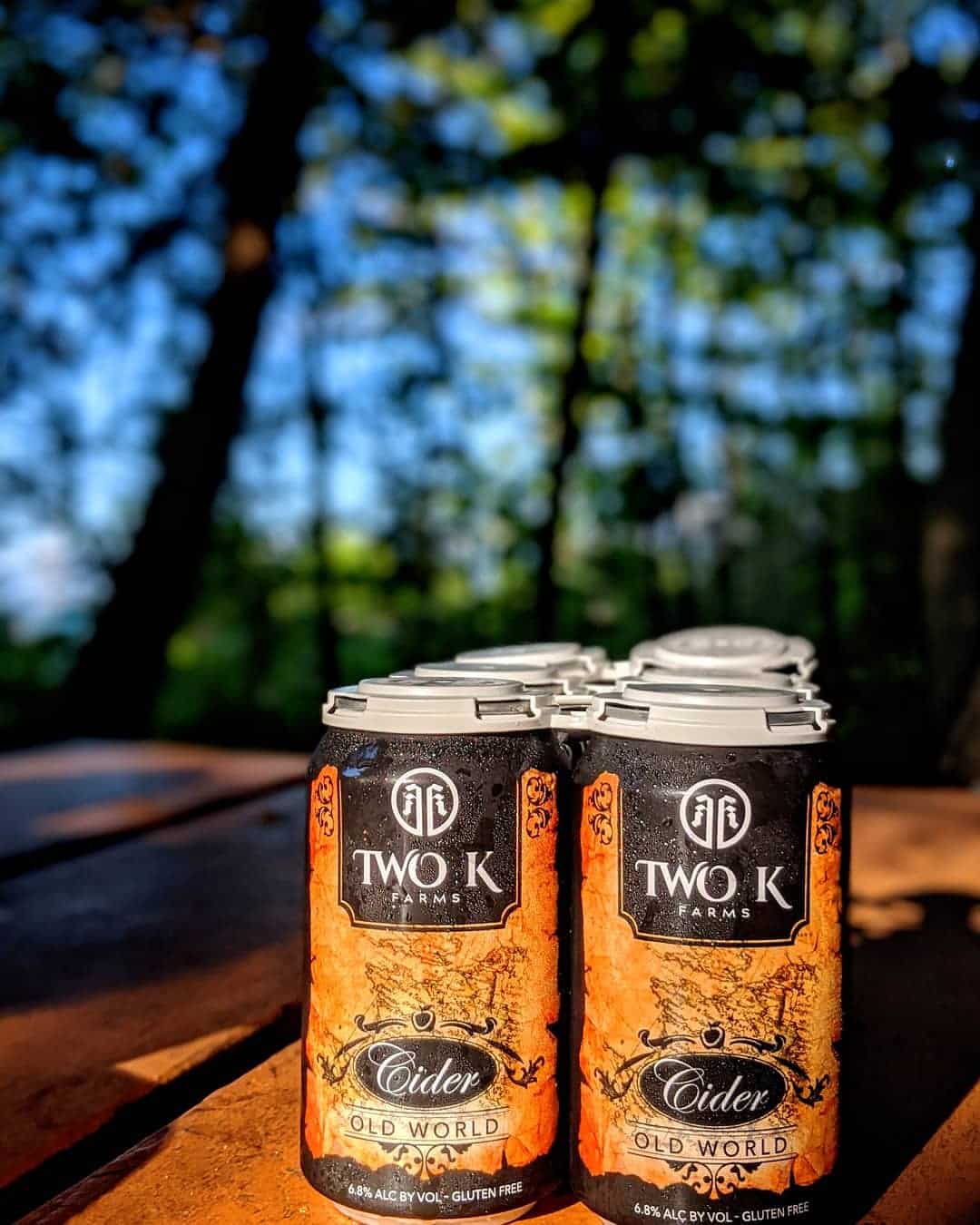 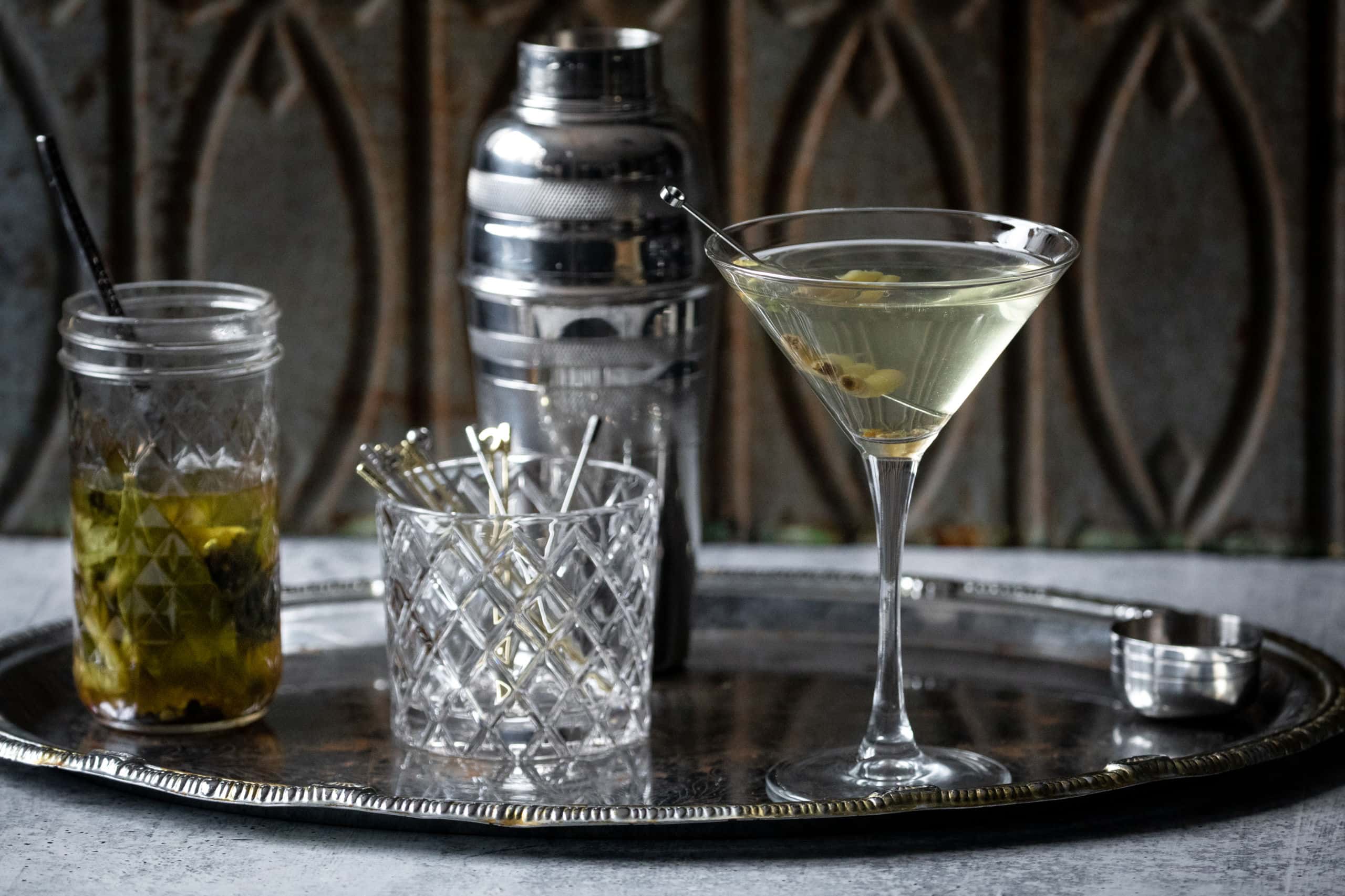 Rick Jaissle, beer enthusiast at Blue Goat Wine & Provisions in Traverse City, is a fan of Barrel + Beam’s Pivot Point, a bière de garde that is lagered in Marquette. Jaissle suggests pairing the amber farmhouse ale with shellfish and salads. Give it a whirl with this month’s recipe for Spring Greens with Whitefish Toast in Traverse Magazine.

It is well known that Ernest Hemingway spent childhood summers at Windemere, on Walloon Lake. It’s also common knowledge that the famed 20th-century writer went on to become a heavy drinker in later years. But did you know there is a classic cocktail named for the notorious novelist? Here’s the story, plus a Hemingway Daiquiri recipe to enjoy at home. 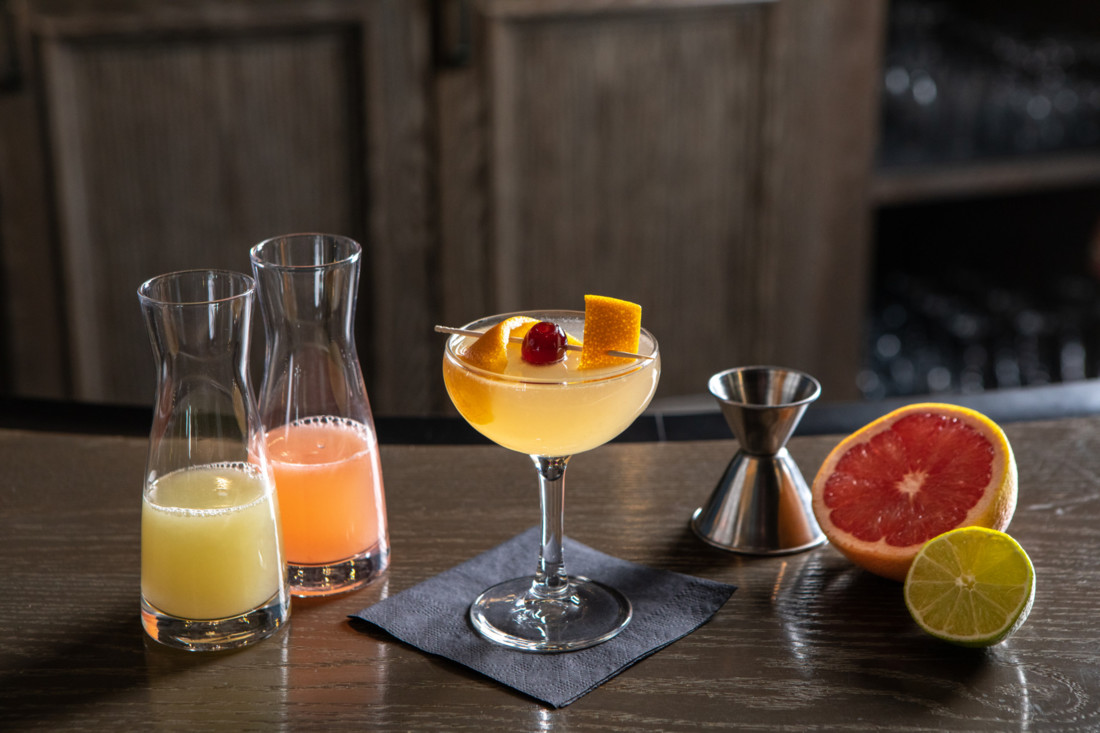