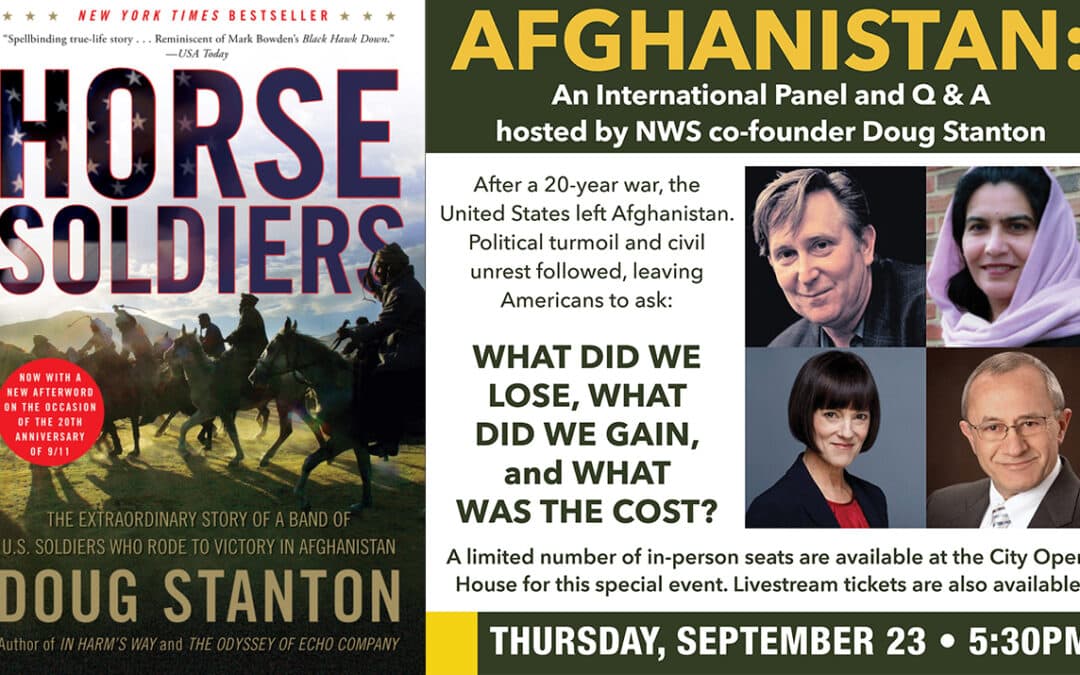 A limited number of in-person tickets are available and live stream tickets can be purchased at the National Writers Series website.

While our recent withdrawal from Afghanistan might have marked the first time you’d thought about America’s Longest War in a while, it was always front of mind for Doug Stanton, author of “Horse Soldiers: The Extraordinary Story of a Band of US Soldiers Who Rode to Victory in Afghanistan.”

To acknowledge the 20th anniversary of 9/11 as well as the events of the book that took place just weeks afterward, Stanton revisited the book to pen a new afterword—and took the opportunity to interview an array of individuals connected to the War in Afghanistan, both in Traverse City and beyond.

What did we win, what did we lose, and what was the cost?

While the NWS will attempt to answer some of those questions at Thursday night’s “Afghanistan Today International Panel,” we wanted to spend a little time with an author who’s spent a lot of time thinking about those questions in relation to the people of Afghanistan (since it is a Writers Series, after all).


NWS: When you finished “Horse Soldiers,” was it ever your intention to revisit this topic, or did you think that when it was done you were completely finished with the story?

Doug Stanton: In the very last sentence of the book, I asked a guy named Pat Essex if it was worth it. And he says, “I don’t know, Doug, but come back in ten years and ask me.” I emailed Pat back in January, and said, “Well Pat, it’s not 10 years; it’s been 20. But I wondered now if you want to talk about if you had an answer to that question? Was it worth it?” I always thought that there were some other chapters in the stories. Turns out, there’ll be many chapters with the fall of Kabul on August 14.

What I wrote about takes place in another world. It takes place weeks after 9/11; it takes place in another America—an America that was more unified, an America that had never used US Army Special Forces as a lead element in any kind of combat. This means that deployment was much more like the OSS dropping resistance fighters behind German lines during World War II, to help the French Resistance against the Nazis. That’s really the dramatic structure of what happened in October of 2001 just weeks after 9/11.

This was the response to the downing of the towers in New York City. So, like I say in the book, it was several hundred people initially. [Just] millions of dollars, very low collateral casualties. Very low. So compare that today, 20 years later, with $2.7 trillion and 2,400 casualties in Afghanistan alone.

NWS: In the afterword, I was struck by the importance of the approach to “think first, shoot second.” That seems to have made an impact.

DS: That’s not the story we know about the US military, right? That was the story that first intrigued me. [These soldiers] trained to be somewhat like Jedi Knights; to do a mind-meld with their host nation partner, and they’re called multipliers. So a team of 12 really can be worth many, many more than that. And that’s what the book is about—how they effectively [they] located with these groups who had been fighting the Taliban, and during our panel, we’re going to meet or hear from people who did not support the Taliban.

NWS: I’m struck by the fact that this all still seems very fresh to you. When you came back to the book to put together an afterword, did you have to revisit the story or was it already front of mind?

DS: It was front of mind. The book was successful, and then became a movie, and so also the book is responsible for the nickname of these guys, which is now part of pop culture, which is “the horse soldiers.” They didn’t have that name before the book, and in fact, the statue of the 9/11 Memorial Park is called “The Horse Soldier Statue.”

But why, though? That’s a good question. It’s been part of my life because the wars have really been in our news so much. And I’ve gotten to know quite a few of the people, and I have kept in touch with a number of them. So, no, it wasn’t hard. I was just curious what some of them felt today. And really most of all, I was curious about what [the people who] were called “civil society workers” were thinking about the post-American presence when the Taliban took over.

NWS: That’s another thing I was curious about. Did you come at this afterword with any particular angle, or did you treat it more like straight journalism instead of storytelling? Where you just have your sources, and ask your questions, and that’s what hits the page?

DS: No, I did not have an angle because, as our panel will I think illustrate for all of this, is that this is a very complex, complicated issue. My job isn’t to necessarily provide all the answers, but it’s to ask questions. And in this case, I think, America has spoken for a long time, and it’s time now to ask the Afghans what it is they feel. And that’s what we’ll do in the panel.

One of the criticisms that I go over in the chapter, and one of the things that [panelist] Jack Segal raises in the chapter is that, perhaps, all along, the Afghans in some way should have been more involved in determining what it is they actually want. And so I let the voices go for a long time. I’m a storyteller, so to really answer your question, the book is trying to figure out for my kids, in a post 9/11 world, how to explain to them how violence could be averted, and conflict could be resolved.

You know, it’s not a war book. It’s not a book about killing things and smashing things. It’s about really how is conflict resolved?

And to do the afterword is to say, okay, did any of it work? And the answer is, it did work in the very beginning—and one of the people I interviewed said, “you know, if we had left in ‘02 we might have been in the same spot we are today in 2021.”

NWS: From the people that you spoke with, is there anything approaching a consensus on any of the war’s outcomes?

DS: The consensus was that we took a small war that had successfully resolved the conflict that moved the Taliban out of control of the country, and we turned it into a big war. That it wasn’t any longer the Afghan’s victory. That is one consensus among diplomats, intel people and soldiers.

What differs—and you’ll hear this on the panel on the 23rd—is that, well, what should we do now? Diplomats might suggest that we’ve done enough; that if we couldn’t do it by now, that it wasn’t going to happen. People who work in counterterrorism would say, “Well, it was working in an interest of security, it needs to keep working.” [And] actually, there’s another consensus, the third one among Afghans in general and women in particular, is that they would have preferred a well-executed, thoughtful peace plan that negotiated governance, to protect the rights of women and other groups in the country.

What we got was a withdrawal without a negotiated settlement of parties. So those three things are, I’m sure, what we’re going to end up talking about on the 23rd.

Karl Klockars is the communications manager for the National Writers Series. This interview has been edited and condensed.